A fourth-year medical student at the University of North Dakota and member of the Climate Psychiatry Alliance writes about his concerns regarding climate effects on health. 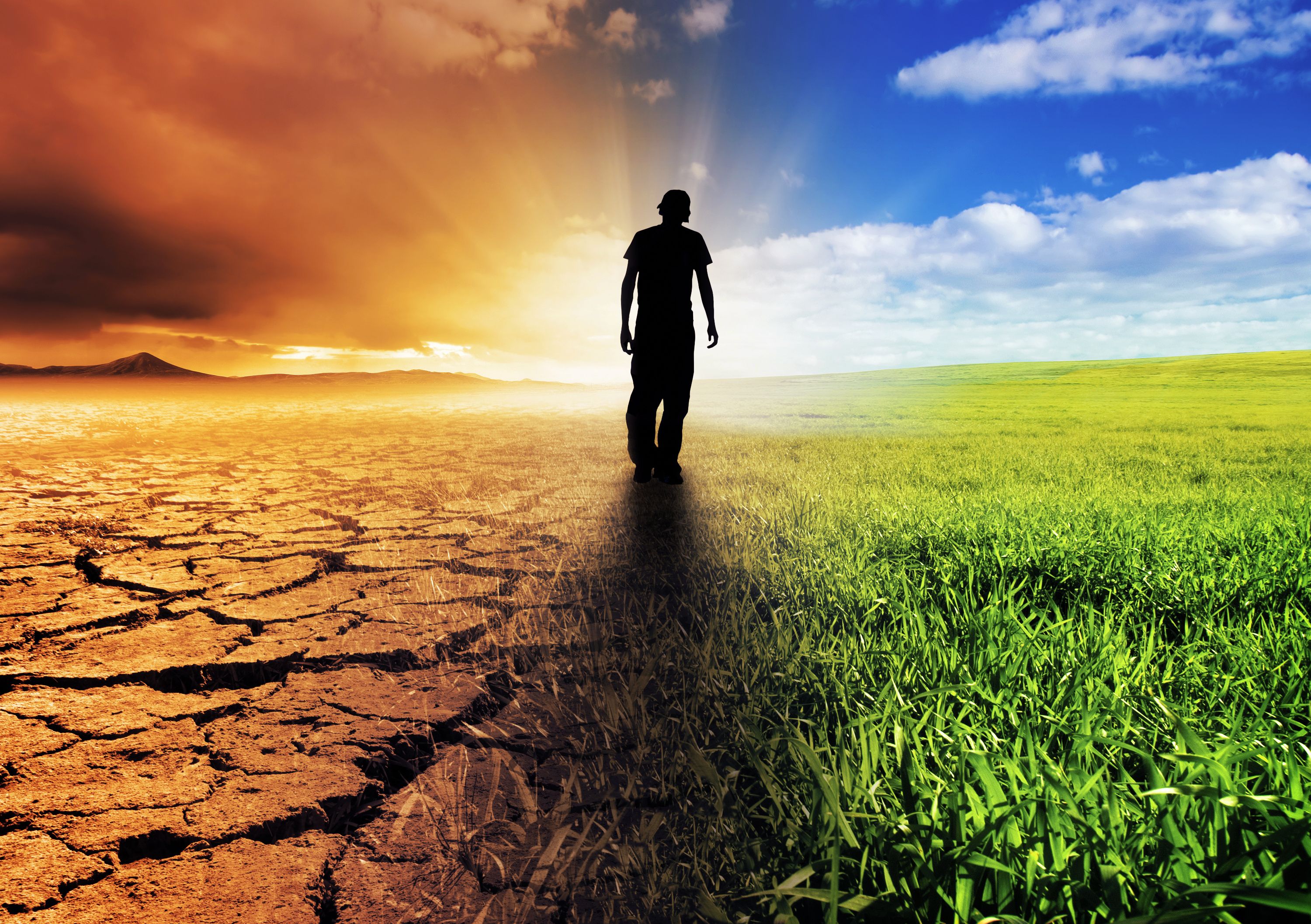 You would think that living with daily low temperatures below the freezing point for half your existence1 would be incongruent with worrying much about global warming or climate change. However, the further I have progressed with my medical education, the more incontrovertible the evidence of climate change’s impact on the world—including North Dakota—has become. And I am especially worried about this impact on my local community.

Growing up in Minnesota, the quintessential childhood experience was playing outdoor ice hockey. Come wintertime, it seemed the outdoor rinks were always waiting for me and my friends to enjoy. Having since moved even farther north to Grand Forks, North Dakota, for medical school, I assumed this move would provide even greater opportunities for outdoor ice skating. But recent years in Grand Forks have yielded increasingly less consistent outdoor ice conditions. So, am I simply idealizing my childhood experience on the neighborhood ice rinks? Likely not, as recent meteorological research serves to validate my impression.

A survey-based research tool called RinkWatch has been documenting temperature thresholds needed for optimal ice-skating conditions in the United States and Canada for 9 years. Combining this data with historical temperature records spanning 80 years, research findings indicate a steady decline in the number of days with temperatures cold enough for outdoor skating, especially in the past 40 years.2 In other words, the experience of outdoor hockey games for which I have such nostalgic memories is literally melting away for future generations and raising additional barriers to an already privileged sport.

In addition to these effects on local recreation, the effects of climate change were very much on the minds of members of the North Dakota agricultural community who came to clinic this past spring and summer. The most severe period of drought ever documented in North Dakota occurred during the week of May 25, 2021, over which time, 17.7% of the state experienced “exceptional drought” conditions.3 This is the most severe drought classification, and it occurred amidst the driest 18 months in 12 North Dakota counties since modern record keeping.4 The shortage of feed that resulted forced a 25% increase in cattle herd sales from the previous year.5

During this period, many of my patients lamented the lack of rain over the course of the clinic encounter. Weather-related comments interspersed throughout the day could be regarded as simple conversation-starters; however, the frequency of these remarks, combined with their underlying sense of emergency made their great significance clear. With a sizable portion of the community reliant on the natural environment for their livelihood, any change in this environment has outsized effects on the community. I was bearing witness to 1 snapshot of the naturally occurring climate stress that is inevitable when living in a community reliant on agriculture.

Viewed through a broader lens, it is becoming increasingly clear that this experience is not an isolated event. Community members are worried about their livelihood, and unfortunately, the evidence indicates there is reason for concern. Staking claim to the geographical center of North America also means North Dakota lacks the climatic buffer the ocean provides to states closer to the coasts, leaving North Dakota especially prone to climate extremes. As a result, North Dakota has experienced one of the highest temperature rises in the nation (0.26°F per decade) over the past 130 years.6 Several climatologists think the high temperature of 100°F in Hazen, North Dakota, on September 28, 2021, was the highest global temperature reading ever at a latitude so far north this late in the calendar year.7 As this community is accustomed to much cooler autumn temperatures, there was a communal uneasiness about the unseasonably hot weather that further elevated the anxiety about the ongoing drought. This fluctuation in mental distress when high temperatures are superimposed on existing climate stress has been demonstrated in Australia, as well.8

Listening to community members’ concerns related to the drought conditions, paired with my personal experience, led me to investigate this topic further. As a medical student, I am particularly interested in examining the health effects of climate change. The American Lung Association’s “State of the Air” is an annual report card on nationwide air quality utilizing United States Environmental Protection Agency (EPA) pollution data. The 2021 report displays worsening trends for North Dakota particle pollution. This includes Burleigh County, which has received a “D” grade for its 7 total days from 2017 to 2019 that exceeded the EPA recommended standard for particle pollution.9 Unfortunately, this grade is unlikely to improve in future reports, as the evidence indicates nearby and local wildfire burn areas are increasing due to climate change.

For instance, the western United States has experienced a tenfold increase in annual wildfire burn area over the last half-century.10 Over 16 million acres burned nationwide from January 2020 to December 202111 including in California, which experienced the worst wildfire season in recorded history in 2020, with over 4.2 million acres burned.12 With the severe drought conditions across North Dakota in 2021, wildfires burned greater than 125,000 acres—a tenfold increase compared to 2020, according to the North Dakota Forest Service.13,14 Wildfires create particulate air pollution, and there is an association between this pollution and greater likelihood of asthma development and exacerbation,15 as well as more frequent chronic obstructive pulmonary disease (COPD) exacerbations.16

Other indirect health effects of climate change include growing concern about its mental health implications. High temperatures (>20°C) during the growing season in India are positively correlated with suicide rates,21 and drought conditions have been linked to increased incidence of suicide among male farmers in Australia,8 both of which are particularly worrisome for the North Dakota agricultural community. When precipitation does fall, it increasingly occurs in intense single-day events nationwide. These high-volume precipitation events lead to increased flooding risk.22 This is evidenced by maximum river flows having increased by about 10% per decade in North Dakota’s Red River watershed over the past century, which predisposes North Dakota communities to natural disaster.23

The North Dakota community is all too familiar with flood risks: A monument in downtown Grand Forks marks the exceptional heights the Red River has reached in the multiple floods since 1897. The flood of 1997 was the most severe and resulted in an estimated $5 billion in damage to the region.24 These types of natural disasters are associated with anxiety, depression, and posttraumatic stress disorder (PTSD) in the affected communities.25 As of 2015, the prevalence of binge drinking in the past month in North Dakota was 24.9% among adults, ranking highest in the nation.26 Patients with preexisting alcohol use disorder are most vulnerable to increased consumption following extreme weather events.27

Additionally, rates of interpersonal violence are increased following natural disasters,28 and floods have been associated with increased aggression in children.25 Increased temperatures are also associated with increased rates of violence, and socioeconomically disadvantaged communities are disproportionately affected.29 The differential effects of climate change on the basis of socioeconomic status is also portrayed by a study that found students without air conditioning have decreased cognitive performance during heat waves compared to students with air conditioning.30

Climate in the Doctor’s Office

During a medical school elective in public health, I prepared potential policy proposals to counter the health impacts of climate change. I decided to pursue this topic even further and had the opportunity to present at the 2021 North Dakota Medical Association Policy Forum to encourage support of statewide renewable energy investment. In advance of this presentation, my typical nervousness was compounded by a concern regarding the reception of this politicized topic. This discussion took place outside of a clinical setting, but it raised the question for me of the physician’s role in discussing climate change. The literature recognizes pollution and climate change as risk factors for medical and psychiatric illness,15-17,31 but I wondered: Where does the discussion of climate change fall within the scope of a doctor’s visit?

The AMA Journal of Ethics released a commentary that asserts that the potential benefits of physician communication and advocacy regarding climate change health effects outweigh the potential risks.32 As evidence continues to accumulate regarding the health impacts of pollution and climate change,15-17,31 it should be considered a physician’s duty to discuss climate change in order to best advocate for patients. By ignoring these topics, physicians miss an opportunity to discuss a topic that affects patient health. Like medical guidance regarding vaccine hesitancy and firearm safety, it is necessary to provide patient education regardless of politics. However, the physician’s guidance to patients should focus on medical facts regarding the health impacts of climate change, rather than nonmedical judgments like the economic tradeoffs of climate change mitigation strategies.32

Utilizing this framework as a guide, physicians must recognize and explore climate change as a cause of medical morbidity. As an aspiring psychiatrist in an agricultural community, I believe recognizing the mental health impacts of climate change could prove lifesaving, given the evidence of increased suicide in male farmers experiencing drought conditions.8

As I watch climate change unfold in lockstep with my professional development, I am increasingly aware that the health of our people relies on the health of our planet. From ice skating to agriculture, climate change affects wide-ranging activities. With 1 in 5 Americans living in rural areas,33 medical providers must be particularly aware of the outsized impacts of climate change on agricultural communities. Due to the body of evidence demonstrating this impact,15-17,31 we must have conversations with patients regarding this public health crisis, regardless of the political environment. I am ready.

Mr Robak is a member of the MD class of 2022 at the University of North Dakota.

28. Rezaeian M. The association between natural disasters and violence: A systematic review of the literature and a call for more epidemiological studies. J Res Med Sci. 2013;18(12):1103-1107.