A report on the first international conference on Daniel Paul Schreber: "No comparison can be drawn between the sublime suffering of 1 individual-a man who, even in his madness, remained a member of Germany’s elite-and the horrors that would be perpetrated in that institution in the years to come..." 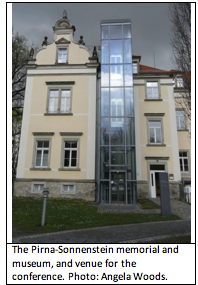 Daniel Paul Schreber centenary – 200 years of Sonnenstein: The Modern Experience and the Performance of Paranoia. A conference held at the Dresden Hygiene Museum and Gedenksttte Pirna-Sonnenstein, Pirna, [Germany] April 13 – 15, 2011. Conceived and organized by Gal Hertz and Anton Pluschke.

“I feel called by Schreber to deliver a message. I’m just not sure what that message is.” And so in his opening remarks, Gal Hertz captured a feeling that I am sure would be recognized by all readers of Memoirs of My Nervous Illness.

Daniel Paul Schreber, the world’s most quoted psychotic patient, is a familiar figure to historians of psychiatry and so no doubt to readers of this blog. In 1893, soon after his appointment to the high office of Senatsprsident in Dresden, Schreber was admitted to Paul Flechsig’s clinic in Leipzig with psychotic symptoms. Subsequently, he was transferred to the Sonnenstein Asylum in Pirna. Memoirs of My Nervous Illness is Schreber’s account of his 8-year incarceration; written while he was still a patient at Sonnenstein, it was a key document in his legal appeal to be recognized as fit to manage his own affairs, and was published shortly after his release in 1902.

After 5relatively happy years at home, Schreber suffered another severe breakdown and was again admitted to an asylum where he died on April 14, 1911. In the same year, Freud published his “Psycho-Analytical Notes” on the Schreber case and a century of scholarship on this most compelling of texts began.

What is the origin, logic, and meaning of Schreber’s crisis? And what message does it have for us today? Memoirs recounts in detail Schreber’s experiences of divine persecution, soul murder, and physical and psychic torment and transformation; it is his appeal to be believed, to be judged by the finest thinkers, the finest scientists, doctors, and theologians of the day. It has since become an intellectual Rorschach test giving rise to seemingly inexhaustible multi-disciplinary analysis. To write and speak of Schreber is to explore the connections between textuality, fantasy, eroticism, psychosis, sex and language; to study law, psychiatry, education, and religion; and even to penetrate the psychic secrets of solipsism, panopticism, capitalism, and fascism.

It would be impossible, therefore, to summarize the proceedings of what is, to my knowledge, the first international conference on Daniel Paul Schreber. Confident that the papers presented over the 3 days will find their way into print, if they haven’t already, I would like instead to venture a view on what made this conference such a memorable occasion.

Multilingual and multi-disciplinary; esteemed, established, and early-career-our potentially disparate group of scholars and artists was fortunate to be grounded by 2 intellectual anchors: Zvi Lothane and Eric Santner.

Lothane, whose magisterial command over the historical detail of Schreber’s life has made him, in Santner’s phrase, “the de facto dean of contemporary Schreber studies,” was generous in his archival authority and ensured that in our collective intellectual enthusiasms we never lost sight of Schreber’s suffering as well as his pleasures, fantasies, and achievements. Santner, the author of an equally magisterial monograph on Memoirs (My Own Private Germany: Daniel Screber’s Secret History of Modernity, elements of which are expanded upon in his forthcoming book, The Royal Remains), focused our attention not on the documentary detail of Schreber’s life but rather on its revelation of “secret histories”-histories of modernity, of psychoanalysis, of Germany. The warmth, wit, and genuine curiosity of Santner and of Lothane helped to create an atmosphere in which intellectual differences could be explored without a sense of harm being done. Considering that a majority of Schreber’s (mostly male) commentators report feelings of intense admiration toward, attachment to, and identification with the author of Memoirs, such collegiality seems an even greater achievement.

A second achievement, and one of many inspired decisions on the part of the organizers Gal Hertz and Anton Pluschke, was the inclusion of 2 artist interventions. Richard Crow, sound artist and co-founder of The Institution of Rot, gave us a preview of his Radio Schreber, Soliloquies for Schziophonic voices premiering at London’s Freud Museum. Eschewing language and sound, performance artist Frauke Frech explored Schreber’s world through the body and delimitations of space. Boundaries, body-shaped boxes, and balancing were central features of an abstract work which urged us to resist our impulses to interpretation and to (over)analysis, to be present in an embodied moment of exchange rather than seduced by textual and psychoanalytic puzzles.

Bodies, our own and those who have come before us, could not be forgotten throughout this conference. For many it was our first visit to the scene of Memoirs, our first chance to see the buildings in which Daniel Paul Schreber was locked, bellowing, and writing, in his communion with God. But the Sonnenstein’s most celebrated inmate is barely a footnote in the institution’s 200-year history.

No comparison can be drawn between the sublime suffering of 1 individual-a man who, even in his madness, remained a member of Germany’s elite-and the horrors that would be perpetrated in that institution in the years to come:

In a newly refurbished museum space next door to a still-functioning psychiatric clinic, academics and artists convened to discuss Memoirs of My Nervous Illness; in the basement 3 flights below, we visited a remembrance room and what remains of the original gas chamber and crematorium. Boris Bhm, director of the Pirna-Sonnenstein Memorial Site, and his colleague Julius Scharnetzky, on both days took us through the memorial spaces, the museum, and the grounds of the Sonnenstein, unfolding its history.

“Daniel Paul Schreber centenary – 200 years of Sonnenstein”: what is the link between the memoirs of one man, and the lives and deaths of so many thousands? Throughout the formal sessions, breaks, and meals, our discussion ebbed and flowed, weighted by the undertow of this question. 14,751 memorial crosses trace a path from the river Elbe to the Sonnenstein; it is simple, direct, final, and, as a living memorial, must be tended to continuously to prevent it from disappearing at the hands of the weather. Memoirs of My Nervous Illness is a node in a network with no such clarity of causal connection, but to an extent this desire to remember, to continue to make meaning from a crisis, to continue to respond to its message, is something we were all, as participants in this singular event, able to share.

You find the program of the conference here.