What drives leaders, and how does that help us better understand them? 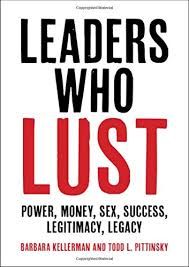 As I was writing this review on Wednesday, January 6th, our Capitol was stormed by protestors as Congress debated the certification of the presidential election. Was this a tragic serendipitous example of how lust can exist between a leader and the supporters who are eager to follow?

The evolution of this book review and its parameters are unusual and relevant for the reader. Back in October, I received an e-mail from the senior media associate of Cambridge University Press; the associate had read some of my pieces in Psychiatric Times and thought I might be interested in the book and the topic. Included in the offer was the possibility to talk with the authors, the first such offer I ever received for a book review. Not only that, but I was given permission to quote their feedback to any of my queries or concerns. Read on for some of what I learned from communicating with the lead author, especially about the Goldwater Rule.

Not sure if my own leadership lust or something else drew me to the offer, it did not take long for me to agree. Reading the book, however, would have to wait until I finished the combined memoir reviews for Psychiatric Times, Disclosing Ourselves: A Review of 4 Psychiatrist Memoirs. At the very least, I thought I would learn something new about leadership and my own mixed leadership outcomes. In addition, I learned there apparently is a new or expanded use of the word and concept of “lust,” which is typically just applied to sex.

The authors are not psychiatrists. In fact, at this time it would be surprising for a psychiatrist to write such a book given the Goldwater Rule, which bars us from professionally commenting on public figures. This standard was tightened soon after President Trump took office. Since the rule only formally applies to members of the American Psychiatric Association, a nonmember could write something like this without any direct repercussions, but it might still appear to be unethical because of this professional standard.

Fortunately, there are scholars from other fields that are not bound by this controversial provision. Both of the authors of this book, Barbara Kellerman and Todd Pittinsky, are leadership experts who have individually written many books on the subject. In this book, their combined writing was done well, which made for a quick read.

Six types of leadership lust are discussed, with 2 example leaders for each category. Analyzing these leaders, both alive and not, would violate the Goldwater Rule for members of the American Psychiatric Association, but Kellerman and Pittinsky offer us an excellent look. They included:

6. Lust for Legacy: Bill and Melinda Gates and George Soros

Among the scores of leadership books, what makes this one unique is its unusual use of the word lust and the diversity of lustful types of leadership that are posited. The authors wrote (p2):

We define lust as a psychological drive that produces intense wanting, even desperately needing to obtain an object, or secure a circumstance. When the object has been obtained, or the circumstance secured, there is a relief, but only briefly, temporarily.

Mental health professionals will note a connection of this characteristic to compulsivity and obsessiveness, although the stories of those featured do not exhibit other features of a full-blown obsessive-compulsive disorder. These lustful leaders are typical in their desire to lead, but also desperately want something else in addition. At the highest intensity and success, such lustful leaders can have major impact on the world. As Billie Jean King once said (and is quoted in the book): “No one changes the world who isn’t obsessed” (p204).

Although a psychiatrist was not among the lustful leaders in the book, I believe the concept could apply to us, too. While I am not sure what type of lustful leader might fit best, I once knew a psychiatrist who wanted to lead every major psychiatric organization—and did. I also knew of other psychiatrists who would run for leadership positions until they either got it or were prohibited from doing so.

Although it appears that none of the leaders in this book were interviewed, their lives were well-researched but not to the extent that a psychiatrist might like. For instance, for the gay activist Larry Kramer, the discussion of “Context” begins with his influential relationship with his father. Apparently, his father was both disappointed and disgusted by his stereotypically unmanly behavior. Kramer felt that he “could never do anything right.” For years, he also felt rejected by society, triggering anger and the need to fight back, which originated the traumatic relationship with his father. A loving older brother provided some corrective emotional experience, although he, too, had to brace himself and not leave when Kramer’s anger erupted. What is missing from this history that most psychiatrists would notice? The mother.

In the epilogue, there is a call for both leaders and followers to learn more about the lustful aspects of leadership. Of course, lustful leaders might also learn from seeing a psychotherapist. However, unless there is enough pain in failure, it seems doubtful that they would pursue such a path. None of the examples are said to have seen a therapist, but that may be unknown to the authors.

With regards to followers, the recent example of rioters storming the Capitol just confirms the importance of understanding leadership lust, since followers often have strong emotional ties with the leader. What we know about narcissism conveys how the idealization of leaders can lead to cultish behavior. Although there is not much discussion about the current role of social media in this relationship, it seems that the echo effects amplify the ties between followers and leaders.

The authors’ choice of leaders to examine is interesting, as there are many other leaders from whom we could learn a lot. In particular, such destructive lustful leaders like Hitler are not included. Nor, to my initial surprise, is President Trump, who is briefly mentioned now and then.

I asked the authors why the president was not included in the book. I thought perhaps it might be fear of retribution, but the answer from Barbara Kellerman was that they did not “want to embroil our discussion, or to drown our primary point, in theater politics of the day.” Kellerman adds that she has written about him in other contexts.

Certainly, this sort of book makes it clear that others will fill the void left as a result of the Goldwater Rule. That is not to say that we could do it better than the authors, but we could add something with our unique expertise. Although psychiatry can be used by political leaders, as has happened in the hospitalization of dissidents in other countries, the Goldwater Rule seems to produce an ethical problem of omission, rather than commission. As a critic, hopefully constructive critic, of the Goldwater Rule, I was curious about the authors’ views on it. Kellerman replied:

In my view it should be abandoned . . . Even the Goldwater Rule is not religiously adhered to, though psychiatrists are more inhibited than other medical professionals . . . for example, when Trump got COVID-19, doctors with various specialties could be found among the pundits, venturing their views on his condition, without having seen the patient, or having his consent, or having full information. The fact that psychiatrists have been far more constrained or inhibited from venturing their views on Trump’s mental health is testimony to, among other things, the fact that mental health remains so far behind physical health in the public’s perception of what is scientific. It is, however, not in the public interest that professionals so highly educated and trained as psychiatrists are discouraged if not prohibited from providing their expert opinion . . .

That we may appear less scientific to the public by not participating is an important new perspective for me and our profession.

In the meanwhile, I am grateful for this carefully researched and unique perspective on leadership. Indeed, the well-being of the world may depend on understanding the risks and benefits of lustful leadership. To me, it can be used for benefit or harm, like atomic energy. I would not mind having a prominent leader, for instance, that was so devoted to addressing climate change. So much good and so much bad, depending on the context and values, can be done by leaders who lust, that we all should know as much as possible about this topic.

Dr Moffic is an award-winning psychiatrist who has specialized in the cultural and ethical aspects of psychiatry. A prolific writer and speaker, he received the one-time designation of being a Hero of Public Psychiatry from the Assembly of the American Psychiatric Association in 2002. He has recently been leading Tikkun Olam advocacy movements on climate instability, burnout, Islamophobia, and anti-Semitism for a better world. He serves on the Editorial Board of Psychiatric TimesTM.