The Psychiatrist and the Slot Machine

Are there differences in the neuroimaging of persons who just gamble and those who pathologically gamble? 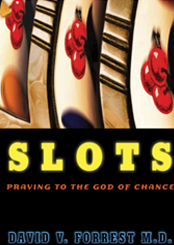 Howard Forman (HF):  What are the most important lessons that a practicing psychiatrist or other physician will learn when they read your book?

David Forest (DF): A physician reading this book will understand the complex biopsychosocial attractiveness of today’s evolved slot machines (slots), how slot players radically differ from other gamblers in their mentality and needs, and how to approach them therapeutically when indicated.

HF: Everyone who reads your bio would agree you have thus far had a very varied career. What was it about slots that motivated you to write this book?

DF: I have been fascinated with machines, from the early steam locomotives I run on a railroad in Connecticut to the Curiosity Rover I modeled on a Mars diorama for trick-or-treaters. Visiting my son who was studying math at Brown University in the early 1990s, I discovered the elaborate Native American casinos rising in the Connecticut woods, fueled by slot machines that had evolved from their dinky origins into impressive altars to chance, whose spellbound players seemed very different from the noisy show-offs and James Bond wannabes at table games. It’s like comparing monks on a mountaintop in silent meditation with commodity traders. I published my study of the lure of slot machines as a trade book accessible to both players and professionals, and said I was a participant observer.

HF: It seems like every few weeks there is a new state or locality that is looking to expand gambling opportunities, usually in the name of job creation or increasing tax revenue. What do you think this expansion says about the space that gambling occupies in our society as a whole? Exactly how big a business is gambling nationwide?

DF: Slots casinos have now multiplied across the land so they are all but inescapable, and many are gilded and lofty cathedrals of gambling, laden with celestial and religious mythic references. Most states are now reliant on slot players for their budgets, taxing those who usually get refunds along with the wealthy. Americans now feed $1 billion a day into them, of which the casinos keep 10%. Gambling is our growth industry. Perhaps there is a personality shift from producer to riverboat gambler type in our post-employment economy.

HF: As you note, the majority of people who play slot machines do so non-pathologically. What are some of the questions you would recommend to a clinician to learn more about gambling patterns to see if it may be in the pathological range?

DF: Casinos, the states, taxpayers, and most players seem content, but for a small percentage of the general population and a higher percentage of regular players, a disastrous and DSM-diagnosable pattern of pathological gambling results abetted by machine design for uninterrupted play, which leads to a trancelike state. This mental zone is induced by the repetitive, meditative rhythm of the reels, the vertical eye movements, and the unpredictable rewards of the unplumbable mystery of the random number generator. These most powerful of conditioning parameters encourage projection onto the machines as with Rorschachs and hopes for divine help in the face of fate. Among other criteria, substitution of playing for important human relations, and attributing transcendent meaning to winning and losing with attendant mood shifts, suggest excessive involvement. Surprisingly many players expect to lose and say “it isn’t the money.”

HF: With respect to neuroimaging which you review in the book, are there differences in the imaging of persons who gamble and those who pathologically gamble?

DF: Imaging is insufficient to capture all the neuromental effects, but when the machine display arrives at a jackpot “near miss” with 1 of 3 sevens off the payline, pathological gamblers light up parts of their brains that signal a win, whereas others see it correctly as a loss. Excitation of the D3 mesolimbic reward pathway that targets the nucleus accumbens is demonstrated by gambling problems of Parkinson patients on dopamine agonists. Cingulate areas register loss sensitivity and can act as a brake.

HF: In your opinion, what single religious experience do you think playing slots most closely recreates?

DF: There are a variety of religious experiences, as William James said, and many types of prayer. Slot players “pray” to the god of chance Einstein feared plays dice with the universe. They seek rewards but agree it is not just the money, but the peaceful escape amidst the mechanical cacophony they stop hearing. A picture emerges of warding off fears of misfortune in a play-sphere microcosm of controlled, or a least manageable, losses. Example are a mother who played heavily when her son was deployed to the Middle East, or an orphaned man “filling the gaping hole.” Many players have suffered traumata and the losses. Others feel departed loved ones speak to them through the machines. Guadalupe Lopez, J. Lo’s mother, famously won $2 million while praying to her namesake, Our Lady of Guadalupe. Many bet not just their pocketbooks but heart and soul, and take wins and losses as apocalyptic judgments, as it were rendering more than its due to Caesars Palace.