Access to illicit drugs is now as easy as a few swipes on a smartphone. Here's a primer for clinicians who aren't well acquainted with this trend and who aren’t familiar with the many substances themselves. 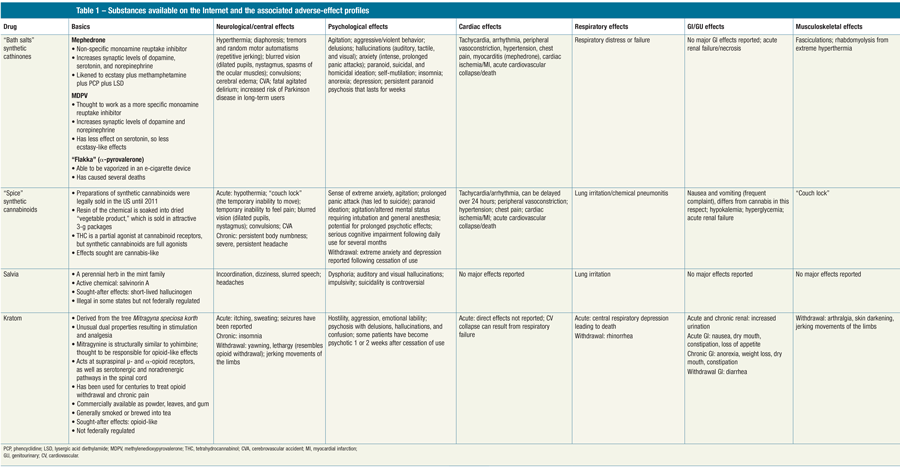 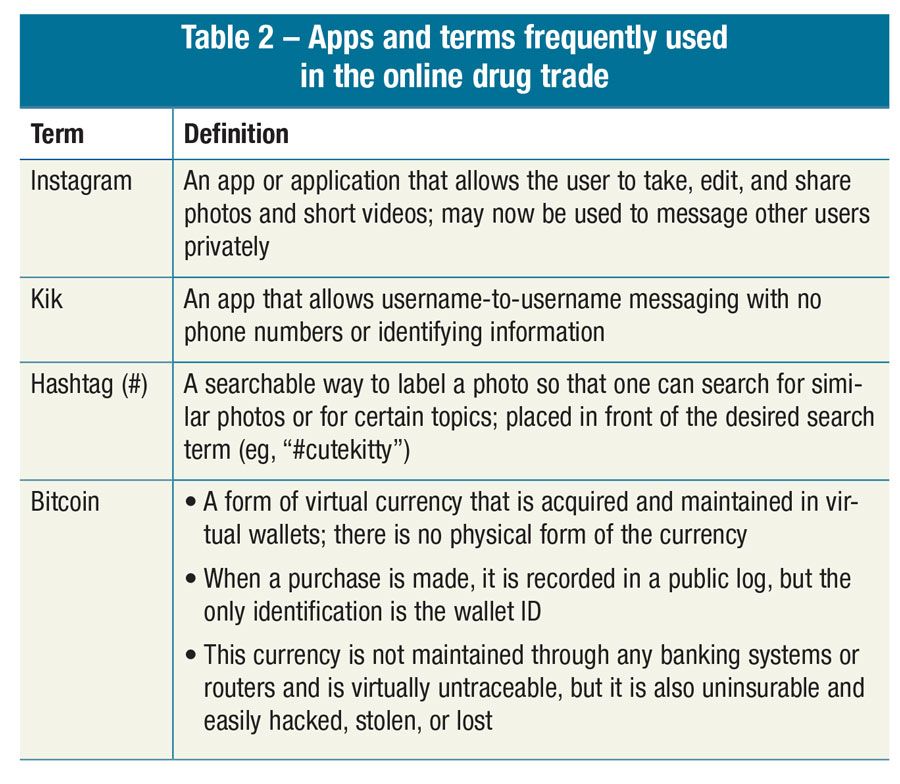 In the 21st century, access to illicit drugs has become exponentially easier, especially for youths and young adults-any substance can be obtained from the Internet. In the past, one had to venture out and find someone who would sell the desired substance. Now it’s as easy as a few swipes on a smartphone. Clinicians have been slow to become acquainted with this trend and aren’t necessarily familiar with the methods that patients use to acquire and divert substances; nor do they have much knowledge of the substances themselves.

Since 2009, law enforcement officials in the US have encountered more than 240 new synthetic compounds. Worldwide, the number was reported as 348 in the 2014 United World Drug Report. As quickly as these drugs are regulated through Drug Enforcement Administration Schedules, the formulas change and new compounds are released. These compounds are primarily sold via the Internet and often are imported from China and the Middle East. Despite significant law enforcement efforts, the availability of these substances has not significantly diminished. Table 1 provides a review of several substances that can be obtained in this manner. (View Table 1 in PDF format)

Most general search engines provide access to about 1% of the whole of cyberspace. Substances that are regulated by individual states but not the federal government are generally easy to access via the “surface” Web. If one has a gift card or credit card and a mailing address, these substances can be ordered with ease. Several of the substances that are thus available include the newer synthetic compounds. Many of these compounds are appealing to the potential buyer because they tend to be inexpensive, easily concealed, and untraceable on conventional drug screens.

When synthetic cannabinoids (for example, “K2” or “spice”) first came out, they were widely available in the retail market-and even on mainstream online markets. In 2011, they were removed and classified as controlled substances. Other substances of abuse that are not yet federally regulated, such as kratom and salvia, are still available on several mainstream online marketplaces.

Another access point for illicit substances is social media. Dealers and buyers have used different apps to market these substances and arrange the terms of sale. (Table 2 lists apps and defines terms that are frequently used in this process.) Most of the sales via social media tend to be of cannabis, prescription pills, and liquid promethazine-codeine cough syrup. Xanax, Adderall, and oxycodone are among the most popular pills, as well as some synthetic addiction-management treatments such as Suboxone (combination of buprenorphine and naloxone) and Subutex (buprenorphine). MDMA, LSD, and ketamine are also easily accessed.

The owners of these social media sites have tried to decrease drug trade, but it has proved a daunting task. Sales of substances like heroin and cocaine are rare in these arenas, probably because of the harsh penalties associated with trafficking these substances. However, persons who seek access to those substances search the Darknet via browsers that make Internet communications anonymous.

Originally designed to protect US intelligence personnel, Darknet browsers are being abused to hide the identities of those who buy and sell illegal substances (and several other illegal items). Darknet marketplaces act as brokers between buyers and sellers of illicit goods. In these marketplaces, a buyer purchases a product; the site holds the buyer’s Bitcoin in escrow until the product is received. Once delivery is confirmed, the Bitcoin is released to the seller.

The marketplaces on Darknet are there for a reason-to sell things like drugs and guns. One of the most notorious (and successful) of these sites was dismantled in 2014. At the time, it had 200,000 registered users worldwide. During the 2.5 years the site was operational, more than $2.5 billion in products were sold. The top 3 items were “weed,” “drugs,” and “prescriptions.” The site administrator had $28 million in Bitcoins when he was caught-he ran the site through a computer at a public library.

Several marketplaces popped up to replace that marketplace as soon as it was gone. Two of the main marketplaces that took over were initially successful, but eventually both shut down after they were hacked and lost millions of dollars in Bitcoin. The current leading marketplace has more than 13,600 drug listings.

Jake, a 16-year-old boy, presents to the emergency department (ED) with agitation and altered mental status. The emergency physician calls the psychiatry consultation service for an admission for “acute mania.” The physician notes that the patient’s urine toxicology screen is negative. Looking at the nursing notes, the attending psychiatrist sees that Jake’s blood pressure and pulse are significantly elevated, he is diaphoretic, and he has scratched himself significantly enough that stitches were considered.

The psychiatrist voices concern that the patient is experiencing toxicity from a substance undetectable in a typical urine toxicology screen. The emergency physician says he is concerned about that possibility, but the parents insist that the patient has had no access to substances. He has been home-schooled, with 24-hour parental supervision since release from a residential substance-abuse program 2 weeks ago. He has not had any friends over, and all substances in the home are in a locked combination safe. They allow that Jake had seemed irritable in the past few days, but he was actually in a good mood today when some video games he had ordered arrived in the mail. However, by dinnertime he appeared agitated.

After questioning, Jake admits that he ingested a “powder” he had ordered from the Internet. The pediatric psychosomatic medicine specialist requests that Jake’s creatine phosphokinase level be checked, which is significantly elevated. Jake is sent to the medical floor for monitoring and hydration, but because of his level of agitation, he is transferred to the intensive care unit for management.

Had he been transferred from the ED to a non-medical psychiatric unit, delay in treatment could have had devastating effects on Jake’s health. This hypothetical case highlights the importance of suspecting and recognizing toxidromes in the absence of being able to test for a specific offending agent so that patients receive appropriate, timely interventions and further harm is prevented.

In this technologically evolving world, it is important to recognize and familiarize oneself with the access to illicit substances that a young person has by virtue of access to almost any digital device. Anticipatory guidance should be considered for parents (outside of the teen’s presence to avoid an inadvertent how-to lesson). The Digital Citizens Alliance recommends that concerned parents:

1 Check to see if a Darknet browser has been downloaded on any computer, tablet, or smartphone in the home.

2 Open and inspect packages that are delivered to the home (dealers often offer to send the drugs in greeting cards or packages from known retailers to avoid detection).

3 Refrain from allowing access to Bitcoin currency because it is a doorway to obtain illicit substances (even though Bitcoin has legitimate uses in online video gaming).

4 Insist that all mail is delivered to your home-do not sign for an individual post office box for the teen.

Dr. Markley reports no conflicts of interest concerning the subject matter of this article.