The Rise in Synthetic Cannabinoids and Cathinones

Cannabis has been heralded as a treatment for many conditions, but what about its psychiatric risks? 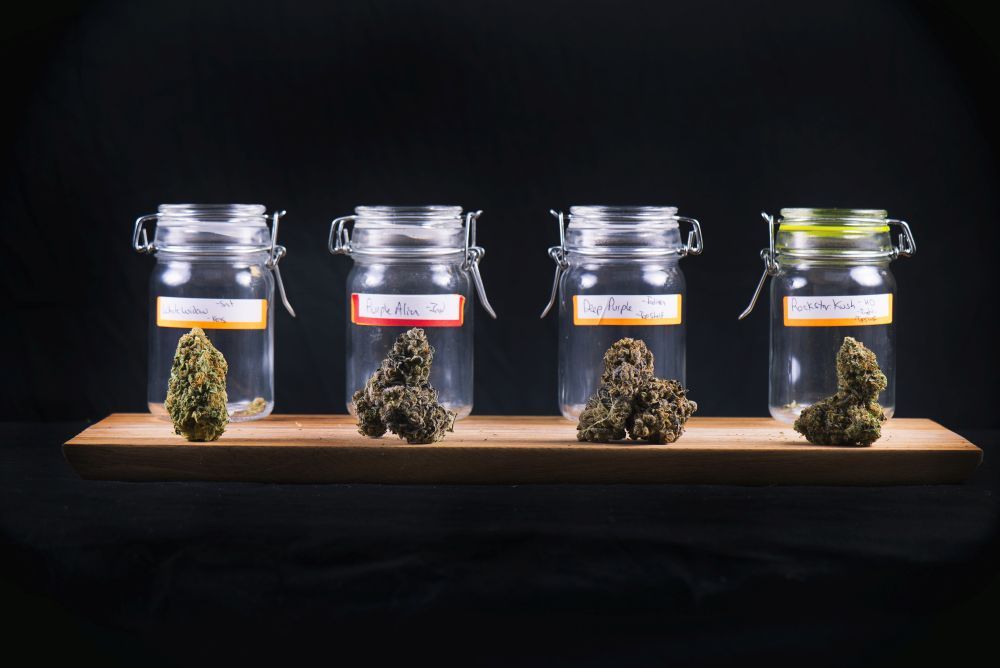 The rise in synthetic cathinone and cannabinoid use has been linked to a wide range of unpredictable effects, including agitation, psychosis, and delirium.1 Managing and stabilizing the complex toxic effects of these drugs can be challenging.

Colloquially known as spice, these designer synthetic cannabinoid receptor agonists have potent intrinsic activity at the cannabinoid (CB) 1 and 2 receptors.2 The compounds were originally developed to study the endocannabinoid system, but they emerged as a drug of abuse in 2008.3 Initially designed to mimic the effects of 9-tetrahydrocannabidiol, synthetic cannabinoids are 2 to 100 times more potent than marijuana at the CB1 and CB2 receptor, resulting in a range of adverse neuropsychiatric symptoms (Table 1).4 Furthermore, synthetic cannabinoids are often adulterated with ingredients to either enhance or attenuate the drug high, resulting in clinically unpredictable toxicological profiles.5 As a consequence, no specific toxidrome is associated with synthetic cannabinoid intoxication, and patients will typically present with a constellation of sympathomimetic, anticholinergic, and marijuana toxic effects (Table 2).6 The most common sympathetic nervous system cardiovascular effects are tachycardia (46%) and hypertension (21%). The anticholinergic effects closely overlap with signs and symptoms of a sympathomimetic toxidrome. Distinguishing symptoms specific to anticholinergic toxicity include dry skin, “cotton mouth,” absent bowel sounds, blurred vision, and urinary retention. Patients may also present with marijuana intoxication symptoms (eg, ataxia, delayed reaction time, and conjunctival injection). Laboratory studies are indicated in cases of severe intoxication with agitation or seizures; the potential metabolic derangements that can result may be life-threatening.

Colloquially known as bath salts, these agents are synthetic psychostimulants structurally related to cathinone, a monoamine alkaloid found in the khat plant. They are commonly abused for their euphoric, empathogenic, and stimulating effects. As substituted phenethylamines, synthetic cathinones are structurally and pharmacologically similar to amphetamine and 3,4-methylenedioxymethamphetamine (MDMA). The most commonly abused synthetic cathinones are 4-methylmethcathinone (mephedrone), 3,4-methylenedioxy-N-methylcathinone (methylone), and 4-methylenedioxypyrovalerone.3,7

Synthetic cathinones produce major effects on the central nervous system and are linked to adverse neuropsychiatric complications (Table 1). These agents stimulate the release of dopamine and inhibit the reuptake of epinephrine, norepinephrine, and serotonin, inducing a broad range of sympathomimetic, serotonergic, and hallucinogenic adverse toxidrome effects (Table 2).8 The most frequent sympathetic nervous system cardiovascular effects are tachycardia (46%) and hypertension (21%). The hallucinogenic effects (ie, perceptual distortions, depersonalization, synesthesia) can be highly distressing, often prompting emergency psychiatric care. Ancillary lab studies should be ordered in cases of severe agitation because of the increased risk for acute kidney injury, rhabdomyolysis, lactic acidosis, stroke, and intracranial hemorrhage. 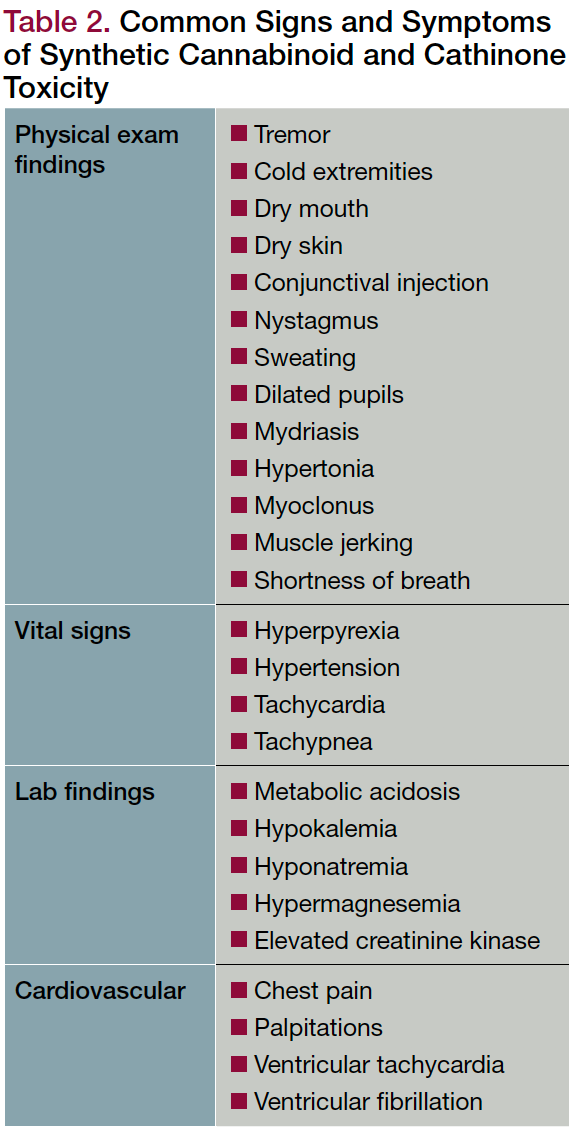 Common Signs and Symptoms of Synthetic Cannabinoid and Cathinone Toxicity

The diagnosis of intoxication is based on a history of exposure and presence of characteristic signs and symptoms. Patients may unknowingly or inadvertently administer synthetic cannabinoids and cathinones, as these compounds are often adulterated with other illicit drugs, such as MDMA.9 Patients will typically present with signs and symptoms of adrenergic neurohumoral activation.10 The neurotoxic symptoms (eg, aggression, confusion, and psychosis) may overlap with a primary mental illness; psychiatrists should rely on the clinical history and physical exam findings for an accurate diagnosis. In the setting of acute intoxication, urine immunoassay testing has a low positive predictive value for synthetic cannabinoids and cathinones.11 The molecular geometry of synthetic cannabinoids and cathinones is ever changing, making it increasingly difficult to identify these compounds via gas chromatography/mass spectrometry, which may not be readily available to assist in the diagnosis process.12 An atypical onset of psychosis and agitation alongside hypersympathetic activation and a mixed toxidrome is strongly suggestive of intoxication.

Psychiatrists should strongly consider the possibility of intoxication in any patient with no known psychiatric history, a negative urine drug screen, and no known contributing medical mimickers presenting with a mixed toxidrome. Patients will not necessarily fit neatly into a particular toxidrome; rather, they present with overlapping signs and symptoms from multiple toxidrome classes. Consequently, differentiating synthetic cannabinoid and synthetic cathinone toxicity can be challenging. Regardless, supportive care and symptom management is the mainstay of the treatment. Benzodiazepines are considered the first line of treatment to reduce the sympathomimetic neural stimulation (eg, hypertension, agitation, and seizures).13

Agitation is the most common neuropsychiatric complication associated with synthetic cannabinoid and cathinone ingestion. In fact, according to one report, 40% of intoxicated patients evaluated in an ED will experience severe agitation.14 The spectrum of psychomotor agitation can be objectively measured and identified with a standardized rating scale such as the Behavioral Activity Rating Scale (BARS). For patients with mild-to-moderate agitation (BARS score = 5 or 6), the patient may initially be calmed with verbal de-escalation techniques and environmental modification. For patients with moderate-to-severe agitation (BARS score > 6), benzodiazepines remain the first-line treatment.15

Among the benzodiazepines, midazolam and lorazepam are considered the initial drugs of choice for decreasing agitation because of their rapid onset of action, short half-life, and parenteral route of administration availability.16 Antipsychotics are commonly administered with benzodiazepines to manage the psychotomimetic effects.17 However, risks associated with antipsychotics in acute poisoning settings must be carefully considered since they may increase the risk of seizure induction, have anticholinergic effects, impair thermoregulation mechanisms, and prolong the QTc interval.13 Serotonergic sedatives such as fentanyl should be avoided because of the increased risk of serotonin toxicity associated with synthetic cannabinoids and cathinones.10

A systematic review reported that 25% to 94% of patients diagnosed with excited delirium were recently exposed to synthetic cannabinoids and/or cathinones. The American College of Emergency Physicians has provided guidance on evaluating excited delirium, for which a minimum of 6 of 10 clinical criteria are required to make a diagnosis. If undertreated, the case-fatality rate is estimated to be 20%, partly due to catecholaminergic cardiorespiratory failure. The cornerstone of treatment is rapid sedation to reduce the sympathomimetic outflow and facilitate lifesaving treatments.18

To date, no large-scale randomized controlled trials have evaluated pharmacological treatments for excited delirium. Nonetheless, the standard of care is to administer benzodiazepines and antipsychotics to decrease psychomotor agitation. In the emergency setting, intramuscular (IM) ketamine (4-5 mg/kg) is increasingly used for sedation of agitated patients with excited delirium. Initial studies in the prehospital setting (emergency medical services) reported that intubation rates following ketamine administration were as high as 60%. Emerging literature supports that IM ketamine administration in the hospital setting (ie, ED) is a safe and effective treatment for excited delirium while not significantly affecting the cardiopulmonary system.19 Mankowitz et al20 reported that more patients required intubation after ketamine administration in the prehospital setting (30%) compared with the hospital setting (1.8%). Prospective studies conducted in the ED have demonstrated that there is no significant difference in incidence of complications between IM ketamine and IM haloperidol.21 The adverse effects of single doses of IM ketamine for agitation are generally transient and self-limiting; they include emesis, hypersalivation, recovery agitation (also known as emergence reaction), hypertension, and tachycardia. Moreover, ketamine has other potential benefits, including a faster onset to sedation compared with benzodiazepines and antipsychotics.21 There are observational reports of ketamine exacerbating psychosis in susceptible patients. Larger studies, however, have concluded that acute- and short-term ketamine administration for agitation does not increase psychiatric inpatient admissions or ED psychiatric evaluations.22 Physical restraints should be used as a last resort, primarily as a bridge to pharmacologic treatment, as prolonged use of physical restraints is likely to worsen delirium and rhabdomyolysis, as well as lead to renal failure, electrolyte abnormalities, and arrhythmias.23

Synthetic cannabinoids have been linked to psychotic reactions, such as paranoia, catatonia, and dissociation, as well as auditory and/or visual hallucinations.24 Longitudinal studies have reported that consumption of potent cannabinoids quintuples the risk of a psychotic episode.25 The psychotomimetic effects are usually transient and resolve within 5 to 8 days; however, up to one-third of patients will transition to schizophrenia.26 Although there is no established antidote, preliminary reports suggest that cannabinol, an allosteric modulator at the CB1 receptor, may reverse the neurotoxic effects.27

The psychotomimetic symptoms can be controlled with first- and second-generation antipsychotic medications with careful consideration of adverse effect profiles. Among the first-generation antipsychotics, the butyrophenone neuroleptics IM haloperidol and IM droperidol are reasonable pharmacotherapeutic options.29 In comparison with IM haloperidol, IM droperidol has a faster onset of action; it rapidly prevents and treats emergent psychotic agitation within 5 to 10 minutes of IM administration.30 Some expert panels have recommended avoiding butyrophenone neuroleptics in cases of substance-induced psychosis due to its proconvulsant properties, cardiotoxic effects, and extrapyramidal symptoms.

Among the second-generation antipsychotics, po olanzapine has a track record of treating NPS-induced psychosis, and prodrug websites have touted olanzapine as the ideal medication to terminate “bad trips.”31 In spite of its efficacy, olanzapine has anticholinergic and central thermoregulatory effects that impair core temperature regulation. In theory, po or IM aripiprazole and ziprasidone are probably the safest antipsychotics to administer because of their relatively favorable safety profile and negligible anticholinergic and seizurogenic effects.13

Despite the infamous concerns about QTc prolongation, epidemiological studies do not support a correlation between ziprasidone and torsades de pointes. In many instances, detoxification with benzodiazepines and rest will often quell the substance-induced symptoms without the added need for antipsychotics. Given the risks associated with neuroleptics, especially in patients who are antipsychotic naïve, it may be best to consider a benzodiazepine as the first-line agent to reduce the psychotic agitation. Antipsychotics can be initiated if the psychosis continues to persist after the detoxification period, or if the patient has an underlying primary psychotic illness.

Dr Sameer Hassamal is an assistant professor of medical education and psychiatry at California University of Sciences and Medicine, Arrowhead Regional Medical Center, in San Bernardino. Dr Sunita Hassamal is a core faculty member for the Internal Medicine Residency Program at Arrowhead Regional Medical Center, San Bernardino. The authors have no relevant financial disclosures to report.