Tales From the New Asylum: Lose-Lose

II would have to wait until the next day, when K’s internal flames of resistance had died down, to learn why he had burned so fiercely. When we finally sat across from one another, his embers still glowed, and I learned that the source of his combustion had been the classic lose-lose scenario. 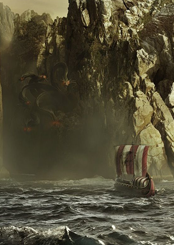 ...life is like getting into a boat that’s just about to sail out to sea and sink.1

Mr K was hawking up a loogie.3 This was no run-of-the-mill loogie. It was a hawking from down deep in the pit-of-your-soul loogie. Mr K, aka Special K, or simply “K,” as his colleagues called him, had long past reached his limit. His entire being-every cell-burned with a fury born of deep frustration and rejection of his current predicament. With an impressive blast of lung power and intercostal muscle contraction, he spewed forth his soul-scraping loogie onto the plexi-glass window separating him from the Correctional Officers (COs) at whom he had been hurling expletives. The liberated expectorate trickled slowly and indifferently down the plexi-glass. In reply, the COs rapidly assembled the “extraction squad,” and forcefully put an end to K’s dayroom outburst.

I would have to wait until the next day, when K’s internal flames of resistance had died down, to learn why he had burned so fiercely. When we finally sat across from one another, his embers still glowed, and I learned that the source of his combustion had been the classic lose-lose scenario.

K was doing life. Take that into consideration prior to judgment. Next, factor in his having already spent ten years in prison. Would a potent mix of hopelessness and desire to connect with others increase one’s chances of joining a prison gang? Only K knows, after having been presented with this choice by the Latin Kings.4 K chose this “family,” and eventually they called upon him to demonstrate his solidarity. Conditions were ripe and the time was nigh.5 A prison riot was preordained, and K’s participation was called upon.

K was brought to the prison inpatient unit after he was found with a sheet twisted tightly around his neck-a common occurrence in the New Asylums. When found, he was completely pulseless and cyanotic. It was only the COs and the emergency response team that saved his life with CPR. K had to spend several days in an outside hospital ICU before being returned to the prison. Suicide may sometimes be indistinct. Uncertain. But it seemed safe to say that K had approached death with some proximity.

Summoning the wisdom of my psychoanalytic supervisors, I chose to follow the affect:

J: “So… that was some serious spitting you did yesterday…”
K: “Yeah, well I was beyond pissed off.”
J: “I could see that…. You know, one thing’s for sure. When you spit in the face of life, it will usually spit back at you…”
K: “Mmm… some of it did bounce off the glass and hit me…”
J: “Not exactly what I meant, but I suppose it’s all the same. I heard what you were up against. You were in a lose-lose situation. No matter what you did-it was going to be bad.”
K: “True.”
J: “In the end, you did what you thought was right. You told the Sergeant what was coming down. You stopped a riot. You may have saved lives.”
K: “I ratted. Now I’m f----d. I’m a dead man… see?”
J: “We’re all dead men.”
K: “Mmm… sooner or later.”
J: “So if that’s the case, let’s see where you stand right now. You didn’t riot. Now you may have some gang justice coming after you. But since you let the prison staff know, they will try to do right by you. Put you in protective custody. Maybe a transfer to a different prison.”
K: “Gotta be a transfer doc…”
J: “I understand. Now… Can you tell me if you are still feeling like killing yourself?”
K: “For me, that’s always an option… But nah, not right now at least. I just… want a way out. I mean… I did the right thing. That should count for something. Should earn me some kinda break, you know?”
J: “K… you are wanting a break, but can you see it from the other side? I mean… you were in a gang. That’s against the rules, like it or not. Everyone has to make choices. All along, you made choices that led you here. You got into prison. You joined a gang. I don’t know how much choice you had in these things, and it’s in the past anyway. But recently, you had to make a choice, and I think it was a wise one.”
K: “I can do the right thing and still get f----d. How is that supposed to be a choice? What the f-k is that supposed to teach me?.... I’ll tell you what it teaches me-It teaches me that you gotta be the King, ‘else you got no choice and you’re screwed.”

Who would be willing to be turned away from all the roadways of the world, unless he understood their real futility?...For while he sees a choice where there is none, what power of decision can he use?...6

J: “I don’t know K. I gotta tell ya… I’ve seen King’s get screwed too. It turned out that eventually, even they had no choice either… and they had to deal with that…”

Seek not escape from problems here. The world was made that problems could not be escaped. Be not deceived by all the different names they are given. They have but one end…. All of them will lead to death…. The choice is not what will the ending be, but when it comes.6

***
J: “Speaking of Kings-you reminded me… a long time ago there was a King who had one of his heavies to collect taxes. If a guy had money, well obviously he had plenty to spare. On the other hand, if the guy looked like he didn’t have money, this meant the guy must be socking it away somewhere, so he could hand over money too. No matter how they lived-no choice.”7
K: “Same old. A man can’t win. Ain’t no different today. A man can do the right thing and still get f----d.”
J: “This is the case for all of us. Maybe it’s just something we all have to face.”
K: “For me, it’s simple. Either I’m transferred, or I transfer outta this life.”
J: “If you killed yourself, you would miss this opportunity completely and forever…”
K: “What opportunity?”
J: “To learn the incredible lesson that you are headed towards now. I can’t know all that you will learn, but I can promise you it will be something very important, and just for you. It may have something to do with how to stop being your own worst enemy. You’ve already taken the first step by not rioting. You’re on your way. Think hard before you throw away a gift like this…”
K: “I’ll think. See what happens. Then I’ll do what I have to.”
J: “That’s all any of us can do.”

There is a tendency to think the world can offer consolation and escape from problems that its purpose is to keep. Why should this be? Because it is a place where choice among illusions seems to be the only choice… Thus you think, within the narrow band from birth to death, a little time is given you to use for you alone; a time when everyone conflicts with you, but you can choose which road will lead you out of conflict, and away from difficulties that concern you not. Yet they are your concern. How, then, can you escape from them by leaving them behind? What must go with you, you will take with you whatever road you choose to walk along.6

I know K will struggle. He may defend, attack, resist. He may yet again spit in the face of life. It will be as though he stands in front of a mirror-should he attack and spit, the reflection will attack and spit back. But this is how it is for each of us. All I am able to do here is listen, offer help where I can, and if life allows it-try to prevent him from killing himself. There once was a time, early in my career, when these offerings felt so very inadequate.

Now I believe adequacy has nothing to do with it. It is simply about not judging the lesson that is in front of him, and trying one’s best to point in its direction. Will this miraculously dissipate suffering? How absurd! Can any of us reach into another person’s consciousness and make a guaranteed change, where that person did not suffer to arrive at this change on their own? And who can predict or prescribe how much suffering any one of us will require?

It becomes hard to escape this lesson: We have to be taught how to accept reality. Some of us may need harder lessons, more homework, extra assignments. Trying to escape these lessons? This is called missing the mark.

There is no choice where every end is sure. Perhaps you would prefer to try them all, before you really learn they are but one…. Men have died on seeing this, because they saw no way except the pathways offered by the world. And learning they led nowhere, lost their hope. And yet this was the time they could have learned their greatest lesson. All must reach this point, and go beyond it…. Learn now, without despair, there is no hope of answer in the world. But do not judge the lesson that is but begun with this…. For from this lowest point will learning lead to heights of happiness, in which you see the purpose of the lesson shining clear….6