This article focuses on treatment resistance to medications in adult male and non-pregnant adult female outpatients with any type of DSM-5 diagnosed bipolar disorder. 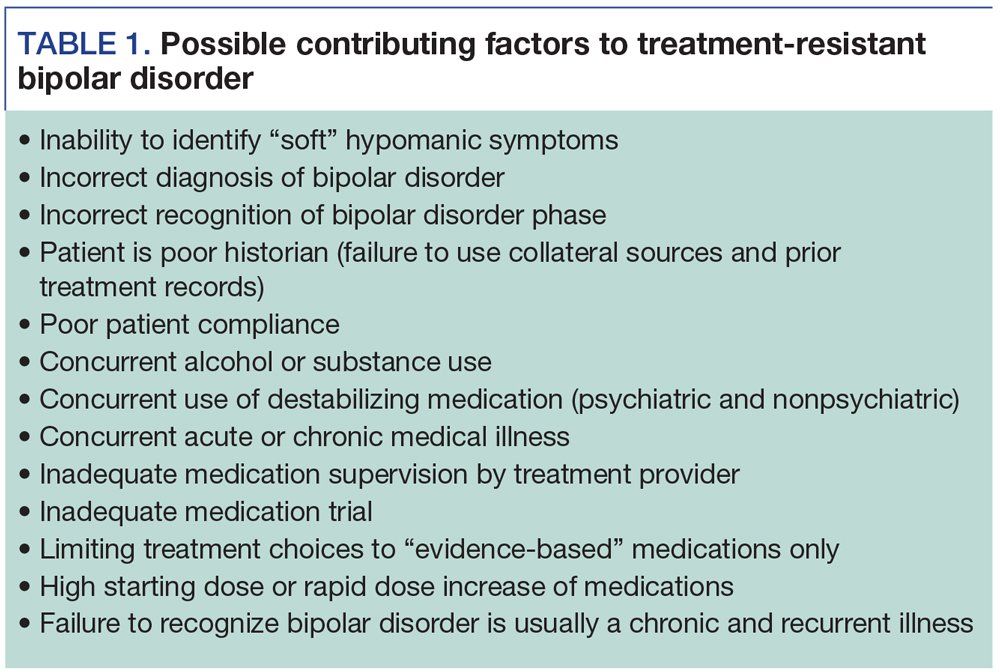 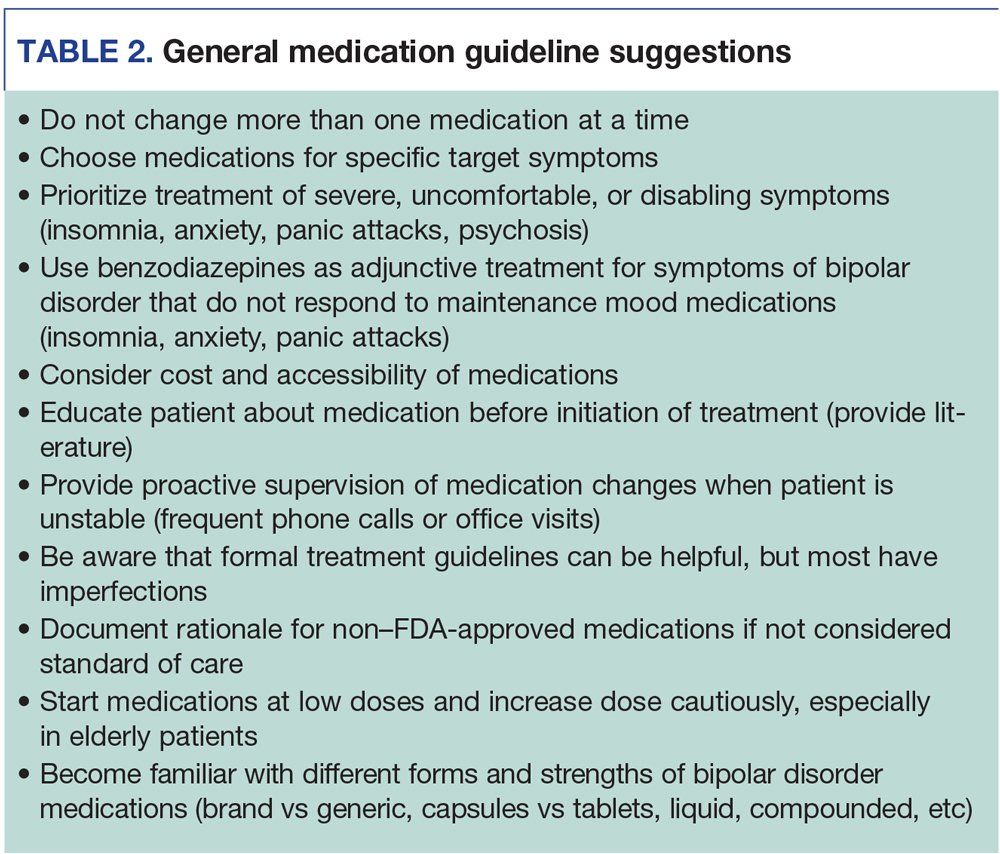 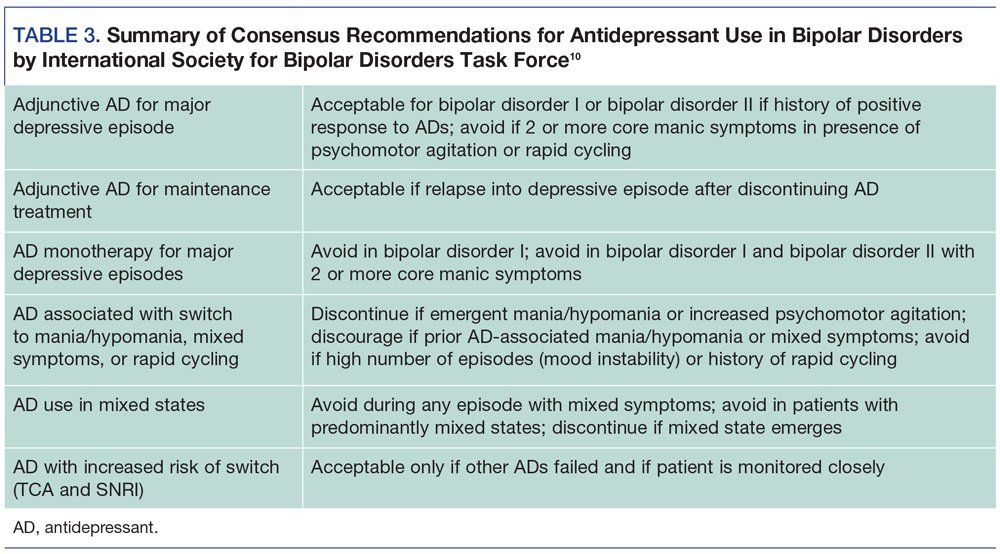 It should be noted that the FDA has approved both vagus nerve stimulation (VNS) and transcranial magnetic stimulation (TMS) for treatment-resistant depression: VNS, if the patient has failed 4 or more different medication trials; and TMS after only 1 adequate medication trial. We consider a patient with bipolar disorder treatment resistant if trials of all medications approved by the FDA for bipolar disorder have failed.1

This article focuses on treatment resistance to medications in adult male and non-pregnant adult female outpatients with any type of DSM-5 diagnosed bipolar disorder.

Although the severity of the bipolar disorder and the degree of response to medical treatments are usually considered predominantly under genetic or other endogenous influences, several non-biological factors often contribute significantly to treatment resistance (Table 1). Some of these factors can be successfully addressed, often resulting in a better prognosis. For clinical purposes, it is more useful to conceptualize bipolar disorder as a spectrum condition rather than a true “bipolar” disorder, since this approach may lead to more accurate recognition of the active symptoms of the current episode. Such recognition is crucial because these findings, rather than the diagnostic subtype of the bipolar disorder as defined by DSM-5, should determine the choice of medications, especially because the diagnosis of MDD has been redefined in DSM-5 to include some hypomanic/manic symptoms.

Some clinicians find symptom checklists or scales helpful in supplementing findings on the mental status examination. Symptom recognition is especially important when medicating patients who have bipolar disorder with mixed symptoms because failure to recognize less obvious or “soft” hypomanic symptoms (insomnia, anxiety, irritability, rapid thoughts, and rumination) can lead to prescribing antidepressants, which will offer no therapeutic benefit and may even worsen activation symptoms. (The reader is referred to 3 helpful and thoughtful references for a more thorough discussion of this important clinical issue.2-4)

Before medications are initiated, several potential obstacles to successful treatment of bipolar disorder should be addressed, especially for outpatients. Significant others of the patient should be included in the initial evaluation and during the course of treatment if necessary, especially if the patient is unable to recognize or communicate symptomatology well.

Patients who use even small or moderate amounts of alcohol or recreational drugs (including marijuana) should be informed that any continued use can interfere with the therapeutic effects of prescribed bipolar medications. Concurrent use of some psychiatric (antidepressants) and non-psychiatric (eg, steroids, opioids) mood-destabilizing medications should be discontinued to determine whether they are opposing the therapeutic effects of antimanic agents.

Volitional unhealthy lifestyle behaviors can also have an adverse effect on the prognosis of bipolar disorder. Patients should be informed that controllable poor sleep habits (staying up late on the internet), predictable and avoidable stressful situations, and irregular medication compliance can neutralize or outweigh the positive effects of prescribed medications. Moreover, frequent exercise and the stability of regular routines, such as healthy eating habits and good sleep hygiene, can enhance treatment outcomes.

A significant number of patients with bipolar disorder, especially those with mixed symptoms, experience chronic insomnia and chronic daytime anxiety, often for years without interruption. These symptoms are not true mood symptoms and may be related to an overactivated generalized hyperarousal state that might be caused by a systemic dysfunction of the hypothalamic-pituitary-adrenal axis.5,6 Aggressive medication treatment of these 2 persistent symptoms is indicated because both are associated with a diminished prognosis, and both can cause impaired daytime functioning and distress. In addition, chronic insomnia in bipolar disorder is associated with impaired cognition, worsening of hypomanic/manic symptoms, and increased risk of suicide.7,8

In most cases, the benefits of maintenance treatment, even with benzodiazepines, usually outweigh the risks if the patient does not have a history of substance abuse and is monitored closely. Most large-scale surveys of different classes of medications taken by patients with bipolar disorder reveal that benzodiazepines are prescribed for a substantial number of patients, probably because their chronic insomnia and anxiety symptoms are not adequately controlled by maintenance mood-stabilizing medications alone.

Although medications are the mainstay of treatment of bipolar disorder, some patients benefit from adjunct psychosocial interventions, which can be provided by the treating psychiatrist or by a non-MD counselor working in parallel with the prescribing physician. According to some studies, the following psychotherapeutic modalities with pharmacotherapy can be helpful in reducing the risk of relapse, improving treatment compliance, and decreasing the number and duration of hospitalizations: psychoeducation, cognitive behavioral therapy, interpersonal and social rhythm therapy, family counseling, and functional rehabilitation training.9 Referrals for this specialized treatment should be made to mental health professionals who have experience and expertise in working with bipolar disorder.

The art of psychopharmacology

The psychiatrist who provides pharmacological treatment for patients with bipolar disorder can improve the prognosis for treatment-resistant bipolar disorder by skillful and strategic management of medications. Helpful general prescribing principles are listed in Table 2. A significant number of psychiatric outpatients are sensitive to and respond to lower than standard doses of CNS medications. For this reason, starting doses for any psychiatric medication prescribed for the first time to outpatients should be very conservative, and increases in doses should be small and gradual. A good example is lithium, which can be effective and better tolerated in outpatient monotherapy or as an adjunct agent at doses that produce a blood lithium level of 0.5 mmol/L or lower.2 We have had success utilizing a compounding pharmacy to produce medications for sensitive patients at strengths lower than the manufacturer’s recommended minimum doses.

Most patients with bipolar disorder require polypharmacy. In these cases, the prescribing physician should not change more than one medication at a time because the cause of any positive or negative effects will be unclear if more than one medicine is changed simultaneously. The cost and accessibility of a bipolar disorder medication should be considered and discussed with the patient before it is initiated because some expensive brand products may not be covered by the patient’s health insurance, or the high copay may be unaffordable. Providing samples to initiate treatment can be helpful in these situations.

Patients who have bipolar disorder should be alerted to the risk of a switch to hypomania/mania when antidepressants are initiated, even when they are being added to an antimanic medication. Furthermore, it is important for the treating psychiatrist to be aware of the risk-to-benefit ratio when introducing antidepressants in different treatment situations. Helpful consensus recommendations for the use of antidepressants in bipolar disorder have been provided by a task force convened by the International Society for Bipolar Disorders and are listed in Table 3.10

During the past several years, multiple formal consensus guidelines for medical treatment of bipolar disorder have been published, usually by a group of academicians and experts on psychiatric organization committees from different countries. Most of these guidelines are organized into different tiers of preferred treatments that are ranked according to evidence-based supporting published research data and the strength of methodology utilized in each study.

More recent guidelines include neuromodulation interventions such as TMS, VNS, adjunctive ketamine with ECT, and deep brain stimulation, although none of these modalities are FDA approved for bipolar disorder. These newer brain stimulation treatments for depressive episodes of bipolar disorder show encouraging, but limited, results.11 Nonetheless, we have treated a few medication-refractory depressed bipolar patients successfully with both VNS and TMS.

Most psychiatrists who treat bipolar disorder are aware that many patients do not respond to FDA- approved medications for bipolar disorder and that trials of off-label, less-often prescribed agents are acceptable and preferable to no further treatment, especially for patients who refuse ECT or in whom ECT has failed. (The reader is referred to 2 publications as helpful references that include both FDA-approved and off-label options for treatment-resistant bipolar disorder.12,13) Our proposed guidelines for treatment options are listed in order of preference for the 3 main phases of bipolar disorder in Table 4.

In most difficult bipolar disorder treatment cases, patients eventually have an acceptable response to one or more of the many currently available FDA-approved or off-label treatment options. Rarely, the clinician is faced with a true treatment failure after all known options have been exhausted. In these situations, the following interventions can be considered:

In many instances, patients with treatment-refractory symptoms are satisfied with a partial benefit from a medical treatment, while they are waiting for the next new treatment for bipolar disorder to become available, if the response is noticeably better than no treatment, especially for the most uncomfortable and disabling symptoms. Lastly, the literature supports the use of 2 more treatments, ECT and clozapine, when all other options have failed.14