When Discipline Was the Therapy: Hans Fallada’s The Drinker

Alcohol has had a long and checkered history in human affairs. Dating back millennia to ancient Egypt, its consumption has been associated with sacredness as well as frivolity. 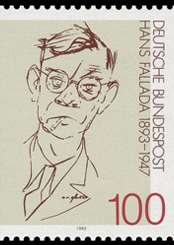 Alcohol has had a long and checkered history in human affairs. Dating back millennia to ancient Egypt, its consumption has been associated with sacredness as well as frivolity. And since at least the ancient Greeks, moral authorities have argued for the virtues of moderation or outright abstinence in its consumption.

Alcohol has also, of course, played a prominent role in the history of health and medicine. It was long prescribed by physicians as a part of treatment regimens (eg. the wine and opium tincture, laudanum) At the same time, it became increasingly seen as a public health scourge, especially among the lower classes.

The physical effects of alcohol consumption, along with the kinds of moral and medical strictures that have more recently accompanied it, have led to a fair amount of consistency in how drinking and alcoholism have been portrayed. Today, both fictional and non-fictional stories about alcohol abuse tend to follow a familiar narrative plot of moral decline: the subject once had it all, then was driven by circumstances to drink, using it to numb his/her pain, eventually leading to the destruction of career, friendships, and marriage. Recovery narratives have added another element, whereby a heroic person, a religious faith, or a self-help organization helps the “drunkard,” inspired finally to abandon drink entirely and adopt a new, healthier lifestyle.

So, it is somewhat disorienting perhaps to read the German writer Hans Fallada’s (1893-1947) novel The Drinker, first published in 1947, with a new edition appearing in English a couple of years ago. Written in a very different time and place from our own-during the final months of Nazi Germany-the book reveals some of the now forgotten aspects of alcohol consumption and treatment.

The novel is, to a great extent, autobiographical. Fallada wrote The Drinker over two weeks in September 1944, while he was staying at a psychiatric facility. A German court committed him there, after he had fired a pistol during an argument with his wife. In order to protect the manuscript during his institutionalization, he wrote it in a coded script that could only later be transcribed.

Fallada’s writing is enjoying something of a renaissance these days, ever since the publisher Melville House took it upon itself in 2009 to begin releasing translations and new editions of several of the author’s novels. These include Every Man Dies Alone, Little Man, What Now?, and The Drinker.

Plight of the alcoholic in history

The Drinker is written from the perspective of Erwin Sommer, a successful and married 40-year-old businessman who, until his business suffers some major setbacks, hardly brought any liquor to his lips. Faced with financial woes, however, he finds comfort in drinking. He quickly begins to consume large amounts of hard liquor, begins lying to his wife and associates, and becomes increasingly unruly. As tensions erupt between him and his wife, he threatens her life, leading the authorities to seek his arrest. Along the way, he is taken advantage of by various riff-raff, lands in prison, and ultimately is committed to a treatment facility.

Sommer is a disquieting person to have as a guide into the mind of a man enamored with what he calls “Queen Alcohol.” He’s not terribly likable, more often than not blaming others for his problems and whining insufferably about his lot. Yet through Sommer’s inner wrangling and inflated self-reflections, Fallada captures the humor and sadness embedded in the obdurate logic common to many in a state of perpetual intoxication.

Fallada’s novel provides a glimpse into a world before self-help recovery movements such as Alcoholics Anonymous had become popular, where therapeutic regimens often differed little from those found in the penal system. Through Erwin Sommer, Fallada does gives an account of personal decline, but it quickly deviates from the narratives commonly found today.

To be sure, the novelist and the protagonist both see Sommer’s fate as a moral collapse, but conventional Christian ideals of virtue and vice do not command center stage. Rather, Sommer becomes increasingly aware of how his circumstances reduce him from an upstanding, civilized man to a base, primitive existence, one in which food, fear, and bare survival dominate one’s waking life. His downfall is felt and described in terms of the loss of bourgeois, middle-class privilege and sensibilities, measured against a social status hard-gained and all-too-easily lost.

Particularly for readers of Psychiatric Times-and in fact anyone with an interest in the history of mental health-Fallada’s lengthy section on Sommer’s time under compulsory commitment should prove compelling. Throughout much of the 19th and 20th centuries, indigent chronic alcoholics in Germany could find themselves confined in a number of institutional settings: jails, prisons, youth homes, and workhouses. In the 19th century, so-called “drinker treatment facilities” (Trinkerheilanstalten, Trinkerheilsttte) were also constructed to accommodate these individuals.

The treatment centers were typically nothing more than a separate wing or building on the grounds of an already existing mental hospital or asylum. While some were publicly financed and run, many were administered by confessional organizations and personnel, who inflected life there with a strong missionary message. To date, however, no one has yet written an archivally based history of these important institutions. So there is much we still do not know about their daily workings.

As Sommer comes to find out, “rehabilitation” at a drinker treatment facility at the time generally meant two things: forced alcohol abstinence and adherence to a rigid institutional discipline. While physicians oversaw the commitment, confinement, and release of charges, they did little more than monitor the physical health of residents.

Physical labor and strict house regulations dominated the lives of inmates (Sommer never refers to them as patients). In the novel, rules govern everything from daily routines-bedtime is 7:30 PM, residents are woken at 5:45 AM-to interpersonal communications. And while guards speak to inmates in the informal second person (“Du” and “Ihr”), the confined are required to show deference to staff by referring to them more formally with “Sie” and “Herr Oberpfleger” (Mr Senior Attendant).

While this system of practices might appear to us (as it did to many residents at the time) punitive in nature, there was a pedagogical justification behind it. Authority, discipline, and work were intended to instill a diligence and perseverance in men and women whose excessive drinking was presumed to reflect an incontinent character. The institution was assumed to be providing the necessary will and power, performed repeatedly through daily routines, which, it was hoped, would become internalized over time. In this, the alcohol treatment centers differed little from prisons and asylums.

There is no way reliably to establish the extent to which these methods proved effective at the time. But Fallada is quite correct that many, maybe even most, residents sought to do little more than “game” the system (ie, do what one thought doctors and guards wanted in order to hasten one’s release).

Getting out of a treatment center or psychiatric facility to which one was indefinitely committed, however, was not all that easy. Staff could often see through such ruses. And so, as Fallada shows, interpersonal relations in the treatment facility played out as a battle of wills between staff and inmates, as well as among inmates themselves, to see who could make the other capitulate.

It may be hard to resist seeing this dog-eat-dog portrait of life behind bars as a reflection on Nazi Germany. After all, Fallada wrote the novel during the final year of the regime, and, as Every Man Dies Alone confirms, he was acutely sensitive to the brutalizing dynamics of everyday life under Hitler. But there are few, if any, cues in the novel that indicate Fallada intended this to be a commentary on the Third Reich. Fallada is not interested in allegory here. Sommer’s story is not intended to stand in for something else. It is what it is: a picture of the brutality human beings can inflict upon one another and themselves out of short-sighted convenience.