The importance of understanding diagnosis, assessment, and treatment. 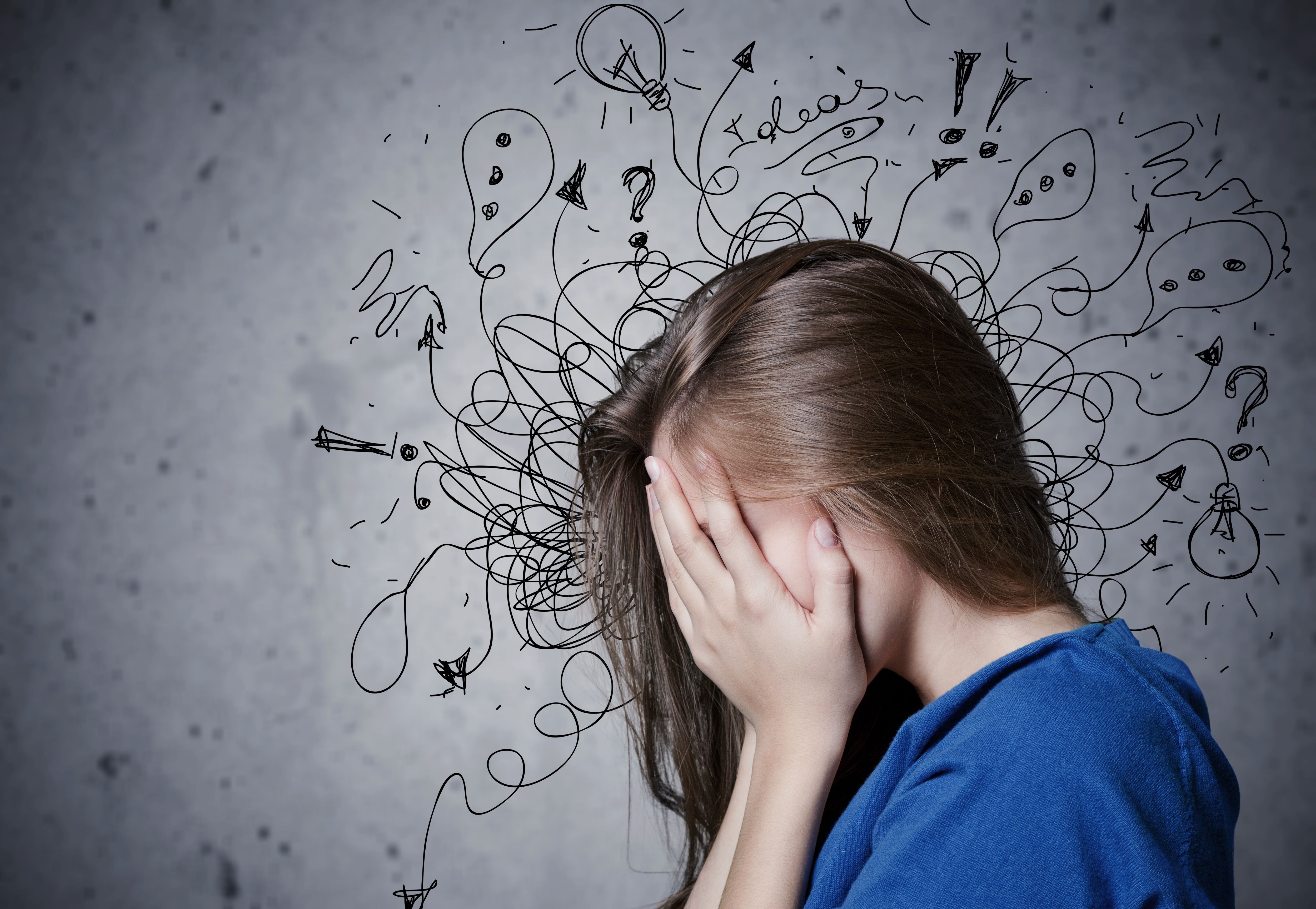 Attention-deficit/hyperactivity disorder (ADHD) is one of the most common neurodevelopmental disorders of childhood.1 This disorder is typically first diagnosed in childhood and can persist into adulthood, with far-reaching implications on academic achievement, employment, finances, peer relationships, and increased accidental injuries and substance abuse.2-5 Children with ADHD may have difficulty initiating and maintaining attention, concentrating, completing tasks, and controlling impulsive behaviors. According to the American Psychiatric Association, there are 3 types of ADHD: predominantly inattentive presentation; predominantly hyperactive-impulsive presentation, and combined presentation.

ADHD prevalence in the pediatric population has been stable over the past 30 years except in the United States, where cases have increased.3 According to a 2016 parent survey, approximately 6.1 million (9.4%) children received a diagnosis of ADHD in the United States.4 Worldwide, ADHD is the third most common mental health disorder, following depression and anxiety.5 Overall, girls are less likely to be diagnosed with ADHD than boys.4 A 2021 global systematic review and meta-analysis suggested that the prevalence of persistent adult ADHD was 2.58%, and the prevalence of symptomatic adult ADHD was 6.76%, with 139.84 million and 366.33 million affected adults worldwide in 2020, respectively.6 ADHD appears to impact men more than women. In adults, ADHD decreases as an individual ages.6

The etiology of ADHD is still not clearly understood; however, combinations of genetic, neurological, and environmental factors contribute to the pathogenesis and symptom expression.5 Genetic factors are implicated in ADHD, but the mechanism of action is not completely clear. Family, twin, and adoption studies have strongly suggested that ADHD is highly inheritable. Moreover, genetic studies have documented the gene sets interfering with neurotransmitter pathways in the brain that implicate rare copy number variants or the collection of higher deletions, as well as the duplications impacting gene transcriptions that are more likely to be found in individuals with ADHD.5,7-9

Pre-, peri-, and postnatal environmental factors play a significant role in the development of ADHD. Prenatal factors include the mother’s lifestyle during pregnancy.10 For example, prenatal alcohol exposure can lead to hyperactive, disruptive, and impulsive behaviors and increase the risk of psychiatric disorders.11,12 Maternal smoking during the prenatal developmental period has been linked to increased risk of ADHD13 and hyperactivity.14 Perinatal factors such as very low-birthweight children have a twofold increase in ADHD.15

ADHD is conceptualized as a disorder of childhood that gradually diminishes over the lifespan.10 However, several prospective longitudinal studies have challenged the prevailing assumption that childhood ADHD and adult ADHD affect the same individuals who share the same neurodevelopmental vulnerabilities.16-18 These studies suggest that more than two-thirds of individuals with adult ADHD never had childhood ADHD. Adult ADHD is generally neglected in epidemiological studies, and, until recently, many attempts have been made to estimate the prevalence of ADHD in adults. Further, researchers are exploring whether ADHD is solely a neurodevelopmental disorder that is diagnosed in childhood, or whether ADHD can be acquired during other developmental periods. The prevalence of persistent adult ADHD from childhood and that of symptomatic adult ADHD were 2.58% and 6.76% in 2020, respectively.19

The diagnostic assessment of ADHD can be complicated, as inattention, impulsivity, and difficulties with concentration can be driven by a myriad of factors. It is well-documented that children and adolescents diagnosed with ADHD have a cooccurring disorder.20 It is estimated that 45% children and adolescents with ADHD have a learning disability; 27% have a conduct disorder diagnosis; 18% have an anxiety disorder; and 15% have a depressive disorder.21 According to a study by Elia and colleagues, oppositional defiance disorder was the most common comorbid disorder at 41%, followed by depression/dysthymia at 22% and general anxiety disorder at 15%.21

In adults with ADHD, the most common cooccurring psychiatric disorders are depression, anxiety disorders, bipolar disorder, substance use disorders (SUDs), and personality disorders.22 ADHD has a high cooccurring prevalence with bipolar disorder: Estimates range between 9.5% and 21.2%, with bipolar I disorder being more likely.23 ADHD and depression commonly cooccur at high rates ranging from 18.6% to 53.3%.24 Individuals with ADHD are at higher risk for developing anxiety disorders than the general population with rates approaching 50%.25-27 SUDS are likely the most common cooccurring condition with ADHD—specifically alcohol and/or nicotine, cannabis, and cocaine use.28

It is important to differentiate if an individual is presenting with any of the above-mentioned conditions to determine if they have comorbid ADHD. Diagnosing ADHD can be a complicated process that goes beyond a checklist. It is imperative to obtain historical information such as academic performance records and previous psychological testing reports, if ever tested. There are several significant barriers to diagnosis and treatment in ADHD, including overlapping symptomology between ADHD and mood, anxiety, SUDS, learning disabilities, information processing disorders, auditory processing disorders, and psychosocial factors. Another key barrier to the accurate diagnosis of ADHD is that some individuals will be able to overcome their deficits by developing and mastering compensating skills that will likely impact the accuracy of ADHD diagnosis and treatment. 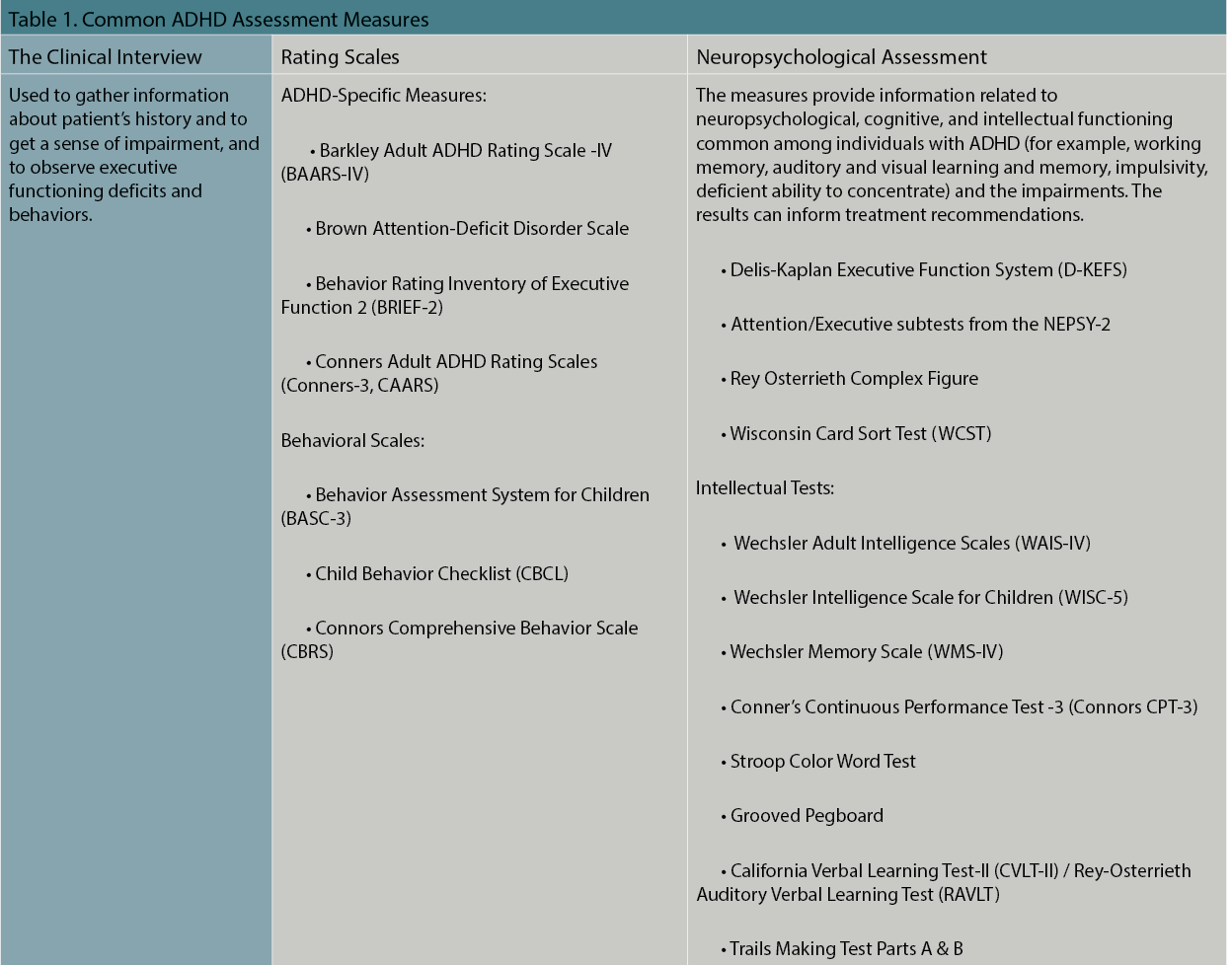 Treatment considerations should be informed by functional outcomes, which include symptom reduction; improved daily, academic, and occupational functioning; and increased quality of life.30 Efficiency at working or studying, maintaining stable relationships, containing or curbing impulsivity, and being satisfied with life overall are indicators of improved functioning. Moreover, adherence to treatment is key to successful management of ADHD.

The first line of ADHD are pharmacologic treatments, which are divided into stimulants and nonstimulants. Stimulant medications include methylphenidate, mixed amphetamine salts, and lisdexamfetamine dimesylate. Nonstimulants used in ADHD treatment include atomoxetine and alpha-2-adrenergic agonists. Table 2 highlights several medication options for ADHD. 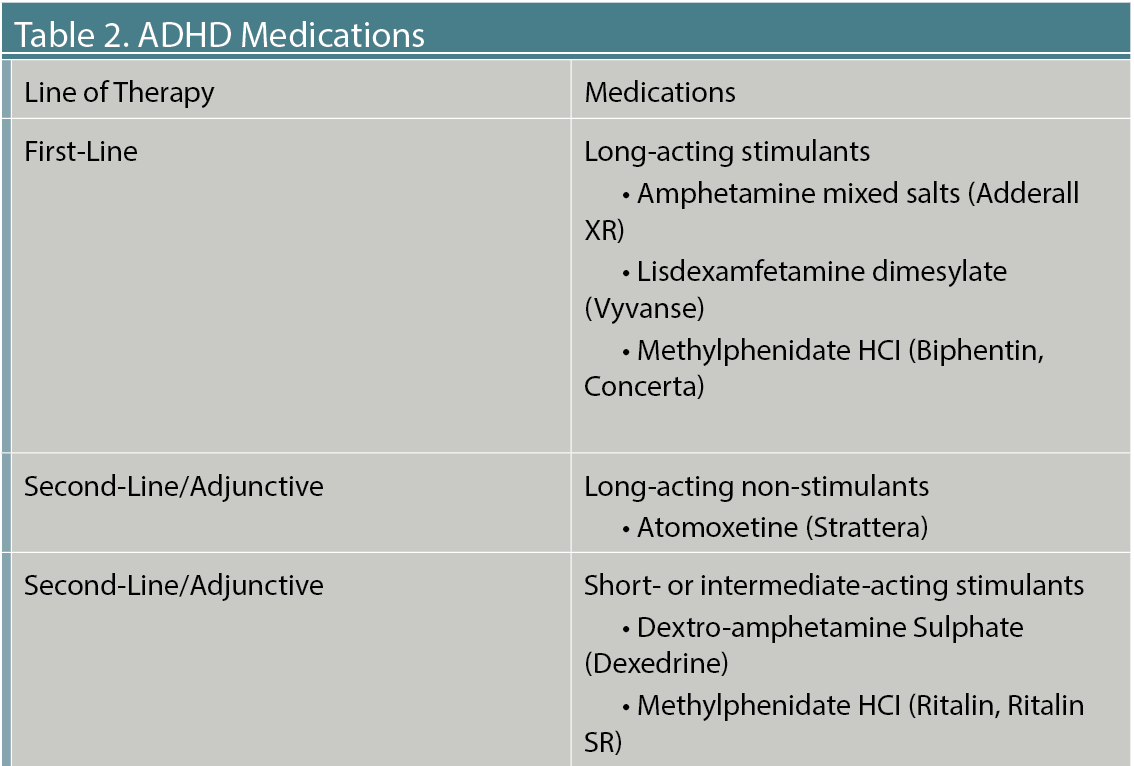