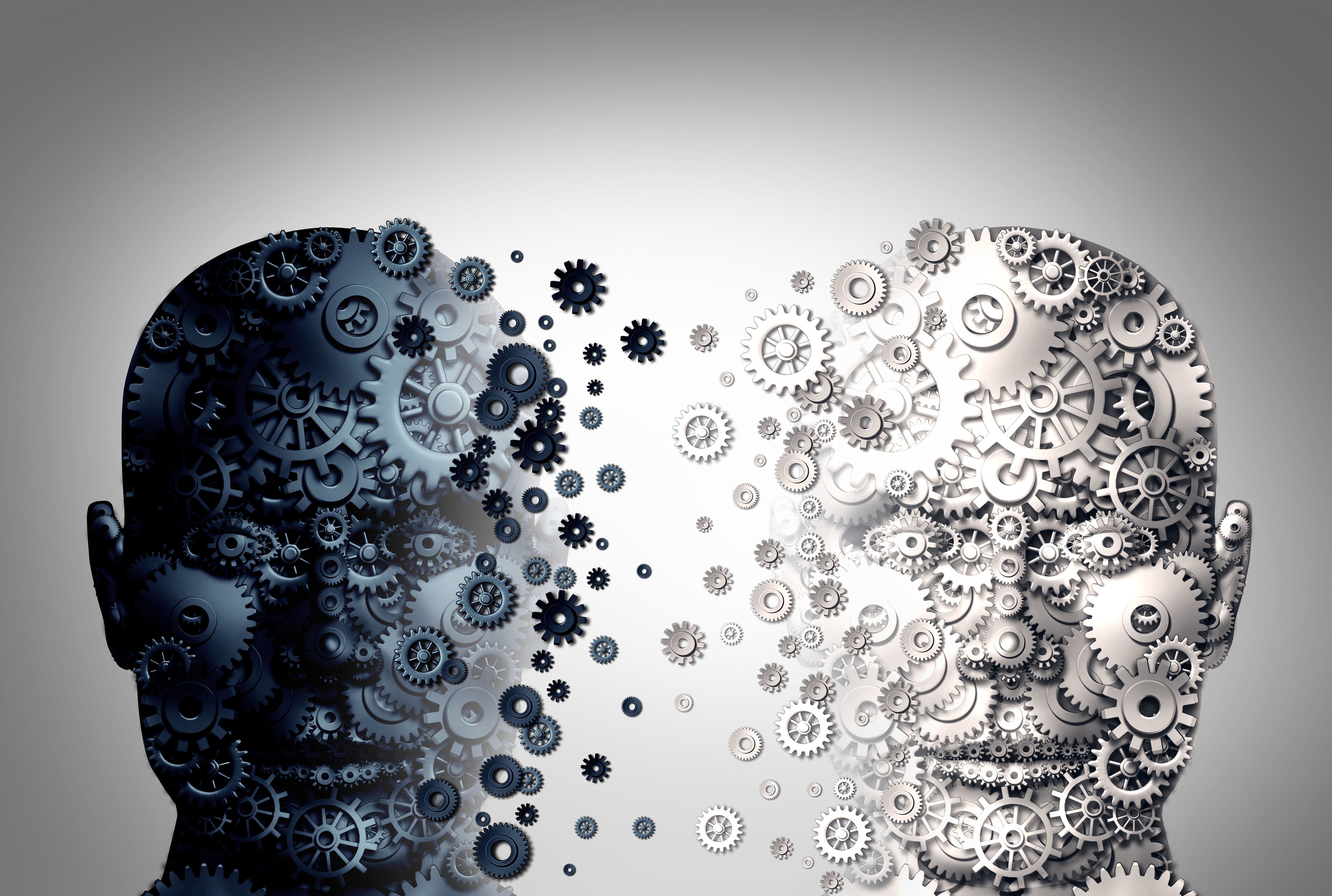 than what sort of disease a patient has”

Imagine devising a pharmacotherapy regimen for each and every patient you see with the same kind of individualized precision and artisanal craftsmanship that an expert tailor uses to create a bespoke suit of clothing. Clinicians sometimes merely equate “personalized medicine” with biomarkers (such as pharmacogenetics), dismissing most other aspects of pharmacotherapy decision-making as largely a trial-and-error process. Yet, when one considers the numerous other clinical, demographic and psychosocial factors that impinge on how any given psychiatric disorder presents, it is not hard to reframe Sir William Osler’s aphorism about “what sort of patient has a disease” as a reckoning of clinical diversity (or what geneticists might call phenotypic heterogeneity).

Rather than simply matching a treatment (say, lithium or divalproex) to a disease state per se (say, bipolar mania), modern psychopharmacology can draw in a much more nuanced fashion from randomized trial data to predict the chances for success with one treatment (or combination) relative to another, based on the presence or absence of key clinical characteristics. “Tailored” pharmacotherapy, informed by the clinical trials literature, involves assessing patient-specific characteristics in order to make reasonable predictions about what treatment or drug combinations have clear rationales and likelihoods for successful outcomes for any one given patient, rather than for a broad diagnosis per se.

In the case of bipolar disorder, clinical diversity is more common than rare. Consider its multitude of contributing factors: patients can manifest pure or mixed mood states, with persistent or undulating symptoms, varying levels of severity and residual symptoms, with or without psychosis, often colored by comorbid medical or psychiatric conditions and personality traits. Bipolar I versus II disorders may differ in symptom profiles (as in depression-proneness or suicide risk) and treatment response (as in the case of antidepressants1).

Some affective or psychomotor symptoms may be more prominent than others; and features such as impulsivity, aggression, suicidality, trauma, cognitive dysfunction, and circadian rhythm disturbances often pose their own conspicuous treatment targets. Tailored approaches also take into account the impact of factors called mediators that can either enhance or derail an otherwise efficacious treatment once it is begun—such as drug adverse effects, treatment adherence, drug-drug interactions, new substance misuse, strength of the therapeutic alliance, or loss of patient insight about the need for ongoing treatment. Biostatisticians call baseline factors that can influence outcome moderators. Examples are described in Table 1. 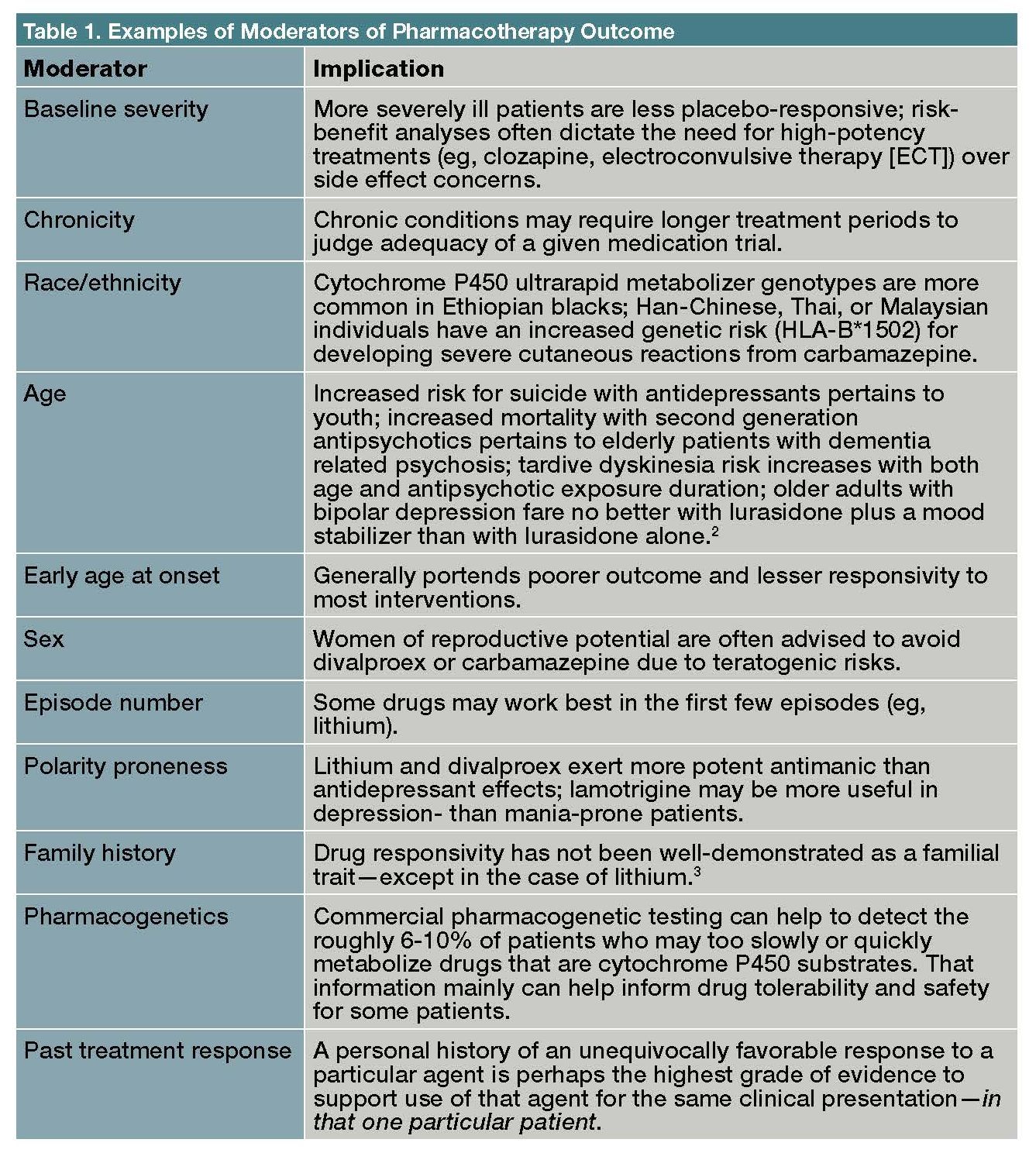 Profiling patient candidacy for a given treatment

From randomized trials, one can take away a number of general principles to help guide the tailoring process of constructing a “profile” for optimal candidacy with 1 treatment relative to another. For example:

• Divalproex may yield a better response than lithium in mania involving mixed (rather than pure manic) episodes,4 multi-episode presentations,5 and comorbid alcohol use disorders.6

• The combination of lithium plus divalproex seems better than divalproex alone in rapid cyclers7 or during relapse prevention following a manic episode.8

• Comorbid anxiety symptoms have been shown to improve during treatment for bipolar depression with each of the four existing FDA-approved agents for bipolar depression. Co-therapy with gabapentinoids offers a rationale-based further anxiolytic approach. With the exception of paroxetine, the anxiolytic properties of SSRIs in bipolar patients are largely unknown and cannot be assumed.

• Lithium may warrant independent consideration for its apparent anti-impulsivity effects in patients at risk for acting on suicidal thoughts.

• Among second-generation antipsychotics (SGAs), there is tremendous variability in efficacy (or lack thereof) for bipolar depression. Aripiprazole, ziprasidone, and risperidone have only negative randomized trials in bipolar depression. Relative to quetiapine or olanzapine-fluoxetine combination, lurasidone and cariprazine are the more weight- and metabolically neutral SGAs FDA-approved for bipolar depression; all 4 exert large effects in bipolar depression, so how else do they differ? Lurasidone lacks data in mania and failed to show value for relapse prevention, but it has demonstrated cognitive benefits.9 Cariprazine, by contrast, treats both manias and depressions and its high affinity for D3 dopamine receptors makes it an attractive option in the setting of low motivation and reward. Its potential value for relapse prevention is unknown. Both lurasidone and cariprazine pose concerns for dose-related akathisia and EPS, suggesting that low doses often may be more useful and tolerable than high doses.

• Beyond 6 months after a manic episode, continuing an SGA plus mood stabilizer may add no greater value for relapse prevention than an antimanic mood stabilizer alone—but incur higher metabolic liability.10

Understanding how clinical trial designs affect study findings is another key aspect of using evidence-based data when crafting a bespoke treatment regimen. An important example involves recognizing low baseline severity as a moderator that can inflate placebo response and obscure true drug advantages. One of the best illustrations of this was the failure of lamotrigine to outperform placebo in FDA trials of acute bipolar depression—likely not so much because the drug was ineffective (and having nothing at all to do with lamotrigine’s titration schedule), but rather, because the placebo response rate was inordinately high among low baseline severity patients.11 By contrast, in patients with high baseline severity, a much lower placebo response rate allowed clear separation of drug effect from placebo.

So what does this mean for the practitioner, who is otherwise left thinking only that lamotrigine is just “a mood stabilizer” that’s sometimes used off-label to treat bipolar depression? Quite a bit: the evidence base for lamotrigine shows that it does exert efficacy in bipolar depression, but the unexpectedly high placebo response rate in pivotal trials (due at least partly to low baseline severity) clobbered any meaningful difference between it and active drug. Meanwhile, other studies have shown lamotrigine to synergize with lithium or quetiapine, consequently relegating it to an often more ambiguous role in treating acute bipolar depression. 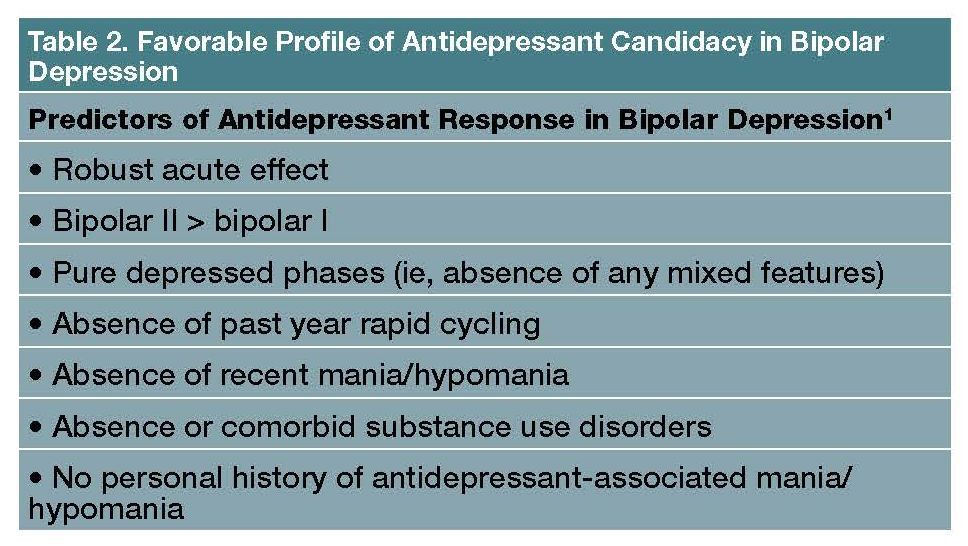 Perhaps the strongest moderator of a successful outcome is a marked acute response, which tends to predict a better enduring effect with minimal risk for mood destabilization; by contrast, a partial or weak acute response bodes poorly. Importantly, less than one-third of patients with bipolar depression display strong antidepressant responses to modern studied antidepressants (ie, sertraline, venlafaxine, or bupropion). And, similar to unipolar depression, chances for responsivity drop precipitously with each successive failure.

A third or more of individuals with bipolar disorder take 3 or more psychiatric drugs;12 therefore, let each one count purposefully. Elegance comes from targeting multiple treatment domains with the fewest agents or capitalizing on known synergies while avoiding mechanistic redundancies. Divalproex, for instance, may represent the treatment of choice in a mania-prone male patient with migraine headaches, impulsive aggression, and alcohol use disorder.

Bupropion could be a handy intervention for a patient with bipolar II pure-depression, prone to nonmixed depression-polarity who is also overweight, smokes, and has attentional complaints. (Ar)modafinil or lisdexamfetamine added to an antimanic drug may neatly address bipolar depression, anergia, and attentional complaints, while the latter may additionally help to manage binge eating or overweight. Every component of a treatment regimen should have a definable purpose; agents deemed ineffective after an adequate trial warrant deprescribing; and decisions about sequential pharmacotherapies are in turn best guided by a careful assessment of patients’ moderating features alongside an informed knowledge of the existing clinical trials literature.