You must assess the presenting problem and identify the appropriate diagnostic code needed for insurance billing. But diagnosis is complicated. Help here. 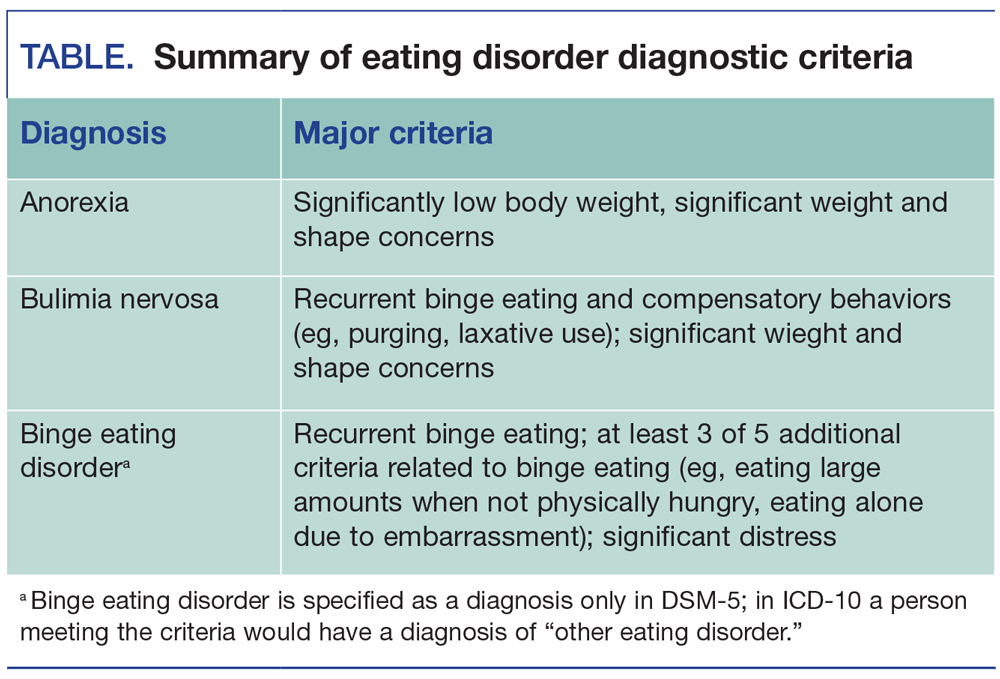 It is essential to detect the presence of an eating disorder because of high associated mortality. Clinicians are faced with the difficulty of determining the presenting problem and identifying the appropriate diagnostic code needed for insurance billing. Although efforts have been made to improve the diagnostic criteria, not all presentations fit perfectly into the established criteria. Moreover, diagnosis is further complicated by the differences in criteria outlined in DSM-5 and ICD-10 (Table). Many applaud the recognition of binge eating disorder in DSM-5 as a major improvement in the field, but it does not have its own code in ICD-10.

Anorexia nervosa was first included in DSM-III and ICD-9. The key clinical criterion in anorexia nervosa is a significantly low body weight. However, the level at which body weight is considered “significantly low” has evolved. DSM-5 criteria for low weight consider what is “normal” for one’s age, sex, physical health, and developmental trajectory. Severity level may be assigned based on specified BMI. Previously, the weight criteria were criticized for being arbitrary because the criterion of 15% below ideal body weight was not empirically derived. ICD-10 (F50.0) quantifies low weight as at least 15% below what is expected or a BMI of 17.5 or lower.

Criteria from DSM-5 and ICD-10 recognize a fear of gaining weight and significant body image disturbance as essential features. One major change in DSM-5 is the removal of the amenorrhea criterion, which was criticized for not being applicable to males or prepubescent females. Moreover, the presence of amenorrhea does not differentiate severity of psychopathology.1 ICD-10, however, still acknowledges that amenorrhea may be present in females with anorexia nervosa. Anorexia nervosa is divided into 2 subtypes:

• Restricting type (F50.01): the patient has refrained from binge eating and/or purging in the past 3 months

• Binge-eating/purging type (F50.02): characterized by recurrent episodes of bingeing and/or purging over the past 3 months

Bulimia nervosa first appeared in DSM-III-R and ICD-9 and is characterized by recurrent episodes of binge eating followed by compensatory behaviors. Binge eating is defined as eating what would be considered an objectively large amount of food in a relatively short period. DSM specifies the presence of a feeling of “loss of control” of one’s eating in addition to the large amount consumed. Both criteria include the presence of compensatory behaviors (eg, self-induced vomiting, laxatives, diuretics, excessive exercise, or fasting) and recognize similar concern about shape and weight as found in anorexia nervosa. DSM-5 specifies a frequency threshold of binge eating and compensatory behaviors as an average of once per week, over the past 3 months.

• Eating much more quickly than usual

• Eating a lot when not physically hungry

• Eating alone because of embarrassment

The differences across eating disorder diagnoses in DSM-5 and ICD-10 complicate the work of clinicians. One obvious criticism of ICD-10 is the absence of a unique code for and recognition of binge eating disorder as a distinct eating disorder-given that it is the most common eating disorder and is associated with significant comorbidities and impairment.

Some additional guidance for determining low weight has been added to the criteria for anorexia nervosa in DSM-5. However, it still may be somewhat subjective and may be difficult to assess without obtaining a patient’s growth charts.

The frequency threshold of binges and compensatory behavior for bulimia nervosa and binge eating disorder was reduced from DSM-IV-TR, because DSM-IV criteria were criticized for being arbitrary.2 Findings suggest that reducing the criteria to once per week over 3 months would not significantly increase the prevalence but should still identify the majority of individuals who have clinically significant eating disorder pathology.2,3

There is some criticism regarding the definition of a binge. As written, there are no well-defined guidelines as to what constitutes “objectively large.” Similarly, criticism surrounds whether the amount of food consumed is necessary or whether the feeling of loss of control is sufficiently indicative of pathology. Perhaps the most salient critique of the diagnostic criteria in DSM-5 is the absence of any shape and weight concerns in the diagnosis of binge eating disorder.

Clinically significant shape and weight concerns are related to greater psychopathology among those with binge eating disorder. However, a considerable number of individuals with clinically significant binge eating do not exhibit shape and weight concerns, so many feel that these concerns should be a specifier because they may indicate severity of pathology.4,5

The severity specifiers in DSM-5 for binge eating disorder are based on number of binge episodes per week and are not empirically derived. Subsequent research has demonstrated that these severity criteria are not related to pathology. A shape and weight specifier would provide more clinical utility.6,7

Knowing how to conduct a differential diagnosis is important; however, it necessitates first asking questions to assess eating behaviors. Because many of the behaviors associated with eating disorders can occur in secret, these disorders may go unnoticed for years. Thus, all physicians should routinely ask their patients about eating behaviors.

Because of the high levels of comorbidity of other psychiatric conditions with eating disorders, psychiatrists need to ask eating behavior questions even if eating is not the primary reason a client presents for treatment. Furthermore, although weight may be associated with certain eating disorders, clinically significant disordered eating behaviors may be present across the weight spectrum. For example, a person who is of normal weight may endorse bingeing and purging behaviors, or someone who is overweight may significantly restrict food intake-resulting in substantial weight loss-and thus meet the criteria for atypical anorexia nervosa.

Universal assessment is necessary because eating disorders are found across ages, races, ethnicities, sex, and the weight continuum. Depending on how much time you have for assessment, it may be best to begin by learning about a patient’s eating behaviors. Understanding eating patterns is a good start to see whether patients report that they regularly eat meals. Assessment for any appetite changes is also useful. To evaluate shape and weight concerns, ask how patients feel about their current shape and whether they are actively trying to lose weight. At first it may feel awkward to pose these questions; however, asking in a matter-of-fact way and stating that you ask this of all patients may reduce the stigma and increase the odds your patient will be truthful and less defensive.

If you have minimal time, at least assess for several key eating disorder behaviors so that you can provisionally diagnose an eating disorder and follow up with a more thorough evaluation at the next session. Assess all patients for binge eating by asking about eating large amounts of food and feeling a loss of control over eating. Inquire about purging behaviors, including self-induced vomiting, use of diet pills or laxatives, or excessive exercise. For patients with diabetes, it is important to ask whether an individual manipulates insulin intake to affect weight. Lastly, assess for significant restriction (ie, consciously restricting or limiting the amount that one consumes) and fasting, which is typically defined as refraining from eating for 8 hours or more while awake.

Many providers ask whether a quick screener is available. The one most widely used in primary care is the 5-item SCOFF questionnaire. However, it was initially created to assess for anorexia nervosa and bulimia nervosa and was created in “British English”; thus, some language modification is needed for use in the US.8,9 More detailed eating disorder assessment tools exist, such as the Eating Disorder Examination (EDE) and the questionnaire version.10 There is also a version of the EDE for children (Ch-EDE).11 However, specialty training is needed to administer the EDE and Ch-EDE interviews.

The EDE was updated to version 17.019 to provide DSM-5 diagnoses by adding detailed description of an algorithm to determine diagnosis. The question about amenorrhea was removed as well. To our knowledge, the Ch-EDE has not been formerly modified; however, because of minor adjustments to the diagnostic criteria, the information needed to determine DSM-5 diagnoses is collected.

When diagnosing an eating disorder, it is important to ensure that symptoms such as low weight or vomiting are not due to a medical condition (eg, gastrointestinal condition, hyperthyroidism). Typically, patients with medical conditions responsible for low weight and/or vomiting do not present with significant concern for shape and weight. Keep in mind that decreased or increased appetite may be a symptom of MDD.

If you’ve missed Part 1 of this Special Report on Eating Disorders, you can find the articles here.

Dr Eichen is a Postdoctoral Fellow at the University of California, San Diego. Dr Wilfley is The Scott Rudolph University Professor of Psychiatry, Medicine, and Psychological and Brain Sciences at the Washington University School of Medicine in St Louis. Dr Eichen reports no conflicts of interest concerning the subject matter of this article; Dr Wilfley reports that she is a consultant for Shire Pharmaceuticals.

Articles in this issue
Emerging Treatments and Pharmacogenetics for Cocaine Use Disorder
Suicide Prevention: Translating Evidence Into Practice
College Students and Mental Illness: Strategies for Optimal Results
A True Believer
The Interplay of Mood Disorders and Eating Disorders
Macho, Bravado, and Eating Disorders in Men: Special Issues in Diagnosis and Treatment
Diagnosis and Assessment Issues in Eating Disorders
Social Media and Depression
Did Freud Ever Do This? A Reflection on the Epidemic of Crazy
Telepsychiatry for Vulnerable and Underserved Populations
At-Risk Children in the US Deserve Careful Assessment
Psychiatry and Its Dichotomies
At Last . . . I Hope!
Using Motivational Interviewing to Improve Health Behaviors in Psychotic Patients
Treatment Options in Late-Life Treatment-Resistant Depression
Related Videos
Related Content