Emerging Treatments and Pharmacogenetics for Cocaine Use Disorder

There are no FDA-approved pharmacotherapies for cocaine use disorder. Here: a review of the off-label use of promising medications for this addiction. 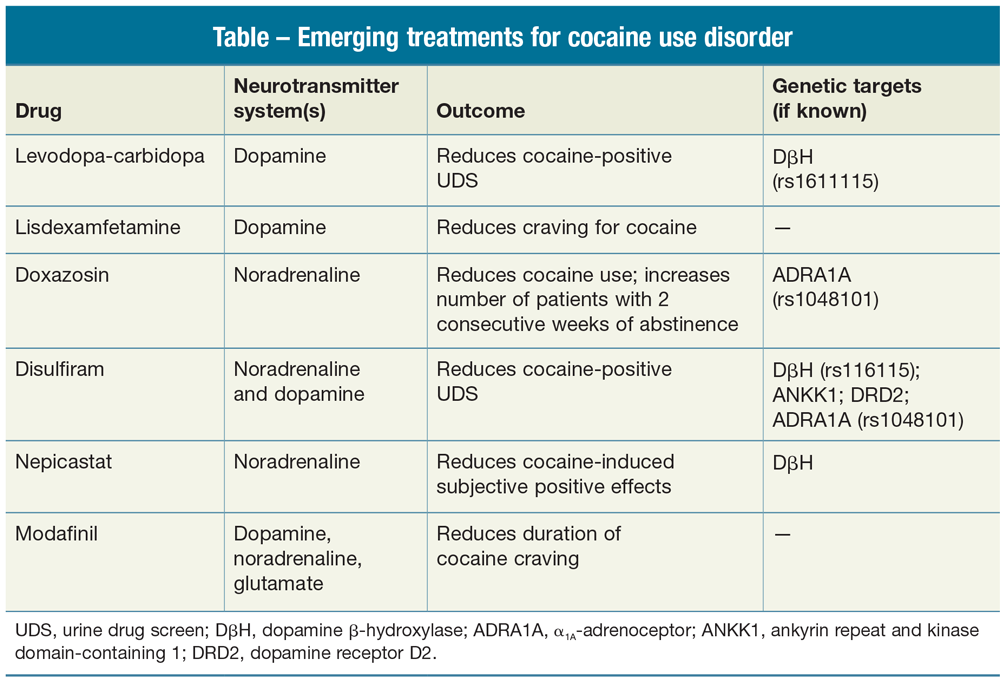 [Acknowledgment-the authors acknowledge The American Academy of Addiction Psychiatry (AAAP) for helping to bring this article to fruition. The AAAP is a professional membership organization for learning and sharing about the science of Addiction Psychiatry translating the research into clinical practice. As relentless advocates for those suffering from the devastation of substance use disorders and mental health disorders, AAAP is driven to transform lives through a commitment to using evidenced-based research to continually improve clinical approaches and outcomes for patients.]

Illicit drug use is on the rise in the US. According to the National Survey on Drug Use and Health, 27 million people aged 12 years or older were illicit drug users in 2014-an increase from the 2002 to 2013 numbers. Results also indicate that 1.5 million people aged 12 years or older who were current users of cocaine (in all forms) included about 354,000 users of crack cocaine.1

There are no FDA-approved pharmacotherapies for cocaine use disorder. In this article we review the off-label use of promising medications for cocaine use disorder (Table). These treatments can be divided into 3 categories: dopaminergic agents, noradrenergic agents, and those with mixed mechanisms of action. Among these treatment targets are proteins with relatively frequent genetic variants that appear to mediate enhanced responses to specific pharmacotherapies. These proteins include metabolic enzymes, receptors, and receptor transducers that mediate the coupling of receptors to second messenger systems such as cyclic adenosine monophosphate.

Dopaminergic agents include levodopa-carbidopa, dextroamphetamine, and lisdexamfetamine. Levodopa-carbidopa has been studied for the treatment of cocaine use disorder because of its ability to increase brain dopamine levels and subsequently correct cocaine-induced hypodopaminergia. Levodopa is able to cross the blood-brain barrier but is administered with carbidopa (a peripheral decarboxylase inhibitor) to slow the breakdown of levodopa and allow a greater portion of it to enter the brain rather than being metabolized to inactive compounds.3

The DÎ²H gene polymorphism rs1611115 has been studied for pharmacogenetics matching with levodopa.4 This functional, regulatory polymorphism leads to a substantial 10- to 100-fold reduction in the amount of the DÎ²H enzyme. With substantially lower DÎ²H levels, the conversion of dopamine to norepinephrine is much slower and lower than normal. For patients with the low DÎ²H activity genotypes (CT/TT) who were treated with levodopa, the odds of having cocaine-positive urine samples decreased significantly, compared with placebo. Individuals with the normal DÎ²H activity genotype (CC) showed no differential levodopa response between active agent and placebo.

Dextroamphetamine, an amphetamine derivative, has also been studied for its ability to correct hypodopaminergia and decrease D2 receptor binding observed with chronic cocaine use.3 However, dextroamphetamine does this via reversal of the dopamine transporter, which results in indirect enhancement of dopaminergic function.

Noradrenergic agents include doxazosin, disulfiram, and nepicastat. Doxazosin, which blocks noradrenergic alpha-1 receptors, has been studied in the treatment of cocaine use disorder for its ability to reduce the acute effects of cocaine. When rapidly titrated, doxazosin significantly reduced cocaine use and increased the percentage of participants who achieved 2 or more consecutive weeks of abstinence.7 Slow titration of doxazosin was found to be similar to that of placebo. This suggests that the medication effect is due, in part, to the rapid titration to the optimal dose, rather than to a longer duration of receiving the optimal dose.

A subsequent study of doxazosin (under review) not only replicated its efficacy for reducing cocaine use, but also showed that this efficacy was enhanced in patients with relatively common genetic variants in the alpha-1 receptor, which appears to change the G-protein coupling of this receptor to the cyclic adenosine monophosphate second messenger system.

Disulfiram also acts on both the noradrenergic and dopaminergic systems by inhibiting the enzyme (DÎ²H) that converts dopamine to norepinephrine through chelation of the copper needed for its activity. Disulfiram at 250 mg daily has significantly reduced cocaine use in several clinical trials.3,8-10 More recently, disulfiram has been studied in conjunction with polymorphisms in the genes that encode for DÎ²H, as well as the ANKK1, the dopamine receptor D2 (DRD2), and the Î±1-adrenoceptor gene variations.8,11,12

The reduction in cocaine use with disulfiram was associated with a specific functional regulatory genetic polymorphism in the gene that codes for DÎ²H (rs1611115). Patients who have 2 of the alleles associated with normal levels of DÎ²H (CC) responded to disulfiram, while those with the genotypes encoding lower levels of DÎ²H (CT and TT) showed no difference from placebo.8

The ANKK1 and DRD29 genes are associated with dopamine D2 receptor sensitivity to dopamine. Patients with CT or TT variants of the ANKK1 genotype had a significant decline in cocaine-positive urine samples on disulfiram; patients who received placebo showed no treatment effect; patients with the CC variant of the ANKK1 genotype showed no effect on treatment with disulfiram or placebo. Using the DRD2 genetic variants, the GT/TT genotype group showed a significant decrease in the number of cocaine-positive urine samples on disulfiram, whereas the GG genotype group showed only a marginal decrease. Moreover, genotype pattern analysis revealed that individuals carrying at least 1 minor allele in either gene (DRD2 or ANKK1) responded better to disulfiram treatment than did individuals carrying only the major alleles.11

Disulfiram inhibition of DÎ²H decreases brain norepinephrine levels, leading to a subsequent reduction in stimulation of adrenoceptors. The gene ADRA1A that codes for the Î±1A-adrenoceptor has a functional polymorphism (rs1048101) in exon 2 and codes for 2 types of receptors based on a single amino acid substitution of ARG for CYS. The more common CYS receptor appears to have a more efficient G-protein coupling to the cyclic adenosine monophosphate second messenger system than does the ARG receptor variant.12 We found that the more common variant with CYS was associated with a significant difference from placebo in response to disulfiram, while the ARG variant showed no difference between disulfiram and placebo.

Because we had already found that the DÎ²H CC genotype was associated with an enhanced pharmacogenetic response to disulfiram, we decided to combine both the DÎ²H-CC and ARDA1A-TT/TC genotypes to form a group of patients with both of these potentially responsive genotypes.8,12 The patients with the responsive polymorphisms for disulfiram again showed a significantly enhanced reduction in cocaine urine samples compared with a minimal change on placebo. In the remaining patients, including those with only 1 of these 2 responsive polymorphisms, no difference was seen between disulfiram and placebo. Thus, the optimal response to disulfiram appears to be among those patients with both the “normal” CYS polymorphism of the alpha-1 adrenergic receptor and the genetically normal, rather than low, DBH levels.8,12

Nepicastat, a potent and selective DÎ²H inhibitor, has also been investigated, but it did not change the kinetics, metabolism, or clearance of cocaine or its metabolites.13 In addition, the lack of effects of nepicastat on the cardiovascular and pharmacokinetic profiles evoked by cocaine suggests that the selective targeting of nepicastat for the DÎ²H enzyme would improve the safety profile of this compound compared with the non-selective DÎ²H inhibitor disulfiram. In an as yet unpublished study, nepicastat significantly reduced several cocaine-induced positive subjective effects.

Among mixed mechanism agents that have been investigated for the treatment of cocaine use disorder, the most successful has been modafinil.14 Modafinil inhibits dopamine and norepinephrine transporters and increases extracellular levels of glutamate. It has been studied for its impact on cocaine use and its ability to decrease symptoms of cocaine abstinence syndrome.3 Patients treated with modafinil reported low levels and shorter durations of cocaine craving intensity on the Brief Substance Craving Scale. Patients were also more likely to rate themselves as “very much improved” on the Clinical Global Impression Scale, compared with placebo.14 No pharmacogenetics analyses have been undertaken with modafinil, but clearly the functional polymorphisms for the dopaminergic, noradrenergic, and possibly glutaminergic systems deserve study.

The medical comorbidities associated with cocaine use disorder include greater risk of infectious diseases and greater rates of health care utilization.3 The treatment of cocaine use disorder needs FDA-approved medications, but the evolving pharmacotherapies have not been uniformly successful and may need to be applied to subgroups of patients to be optimally effective.

The emergence of effective pharmacotherapies requires matching medications to optimal patient groups. Genetic markers can be used to advance identification of patients for this type of personalized medicine. Thus, in addition to targeting multiple neurotransmitter systems, current pharmacotherapy research incorporates pharmacogenetics to identify subpopulations that might preferentially respond to specific medications. New challenges include matching medications such as modafinil, which targets multiple neurotransmitter systems, to genetically selected subgroups of patients.

Dr Andry is Addiction Psychiatry Fellow, Dr Shorter is Assistant Professor, and Dr Kosten is JH Waggoner Chair and Professor of Psychiatry, Neuroscience, Pharmacology, Immunology & Pathology and Co-Director, Dan Duncan Institute for Clinical and Translational Research at the The Menninger Department of Psychiatry & Behavioral Sciences, Baylor College of Medicine in Houston, TX. Dr Kosten is also Editor of the American Journal on Addictions, the official journal of the American Academy of Addiction Psychiatry. The authors report no conflicts of interest concerning the subject matter of this article.

1.Center for Behavioral Health Statistics and Quality. Behavioral Trends in the United States: Results From the 2014 National Survey on Drug Use and Health. Washington, DC: US Department of Health and Human Services; 2015. HHS Publication No. SMA 15-4927, NSDUH Series H-50.

6. Mooney ME, Herin DV, Specker S, et al. Pilot study of the effects of lisdexamfetamine on cocaine use: a randomized, double-blind, placebo-controlled trial. Drug Alcohol Depend. 2015;153:94-103.

Articles in this issue
Emerging Treatments and Pharmacogenetics for Cocaine Use Disorder
Suicide Prevention: Translating Evidence Into Practice
College Students and Mental Illness: Strategies for Optimal Results
A True Believer
The Interplay of Mood Disorders and Eating Disorders
Macho, Bravado, and Eating Disorders in Men: Special Issues in Diagnosis and Treatment
Diagnosis and Assessment Issues in Eating Disorders
Social Media and Depression
Did Freud Ever Do This? A Reflection on the Epidemic of Crazy
Telepsychiatry for Vulnerable and Underserved Populations
At-Risk Children in the US Deserve Careful Assessment
Psychiatry and Its Dichotomies
At Last . . . I Hope!
Using Motivational Interviewing to Improve Health Behaviors in Psychotic Patients
Treatment Options in Late-Life Treatment-Resistant Depression
Related Videos
Related Content