Six fundamental assumptions underlie the medical model most psychiatrists use in their clinical work. 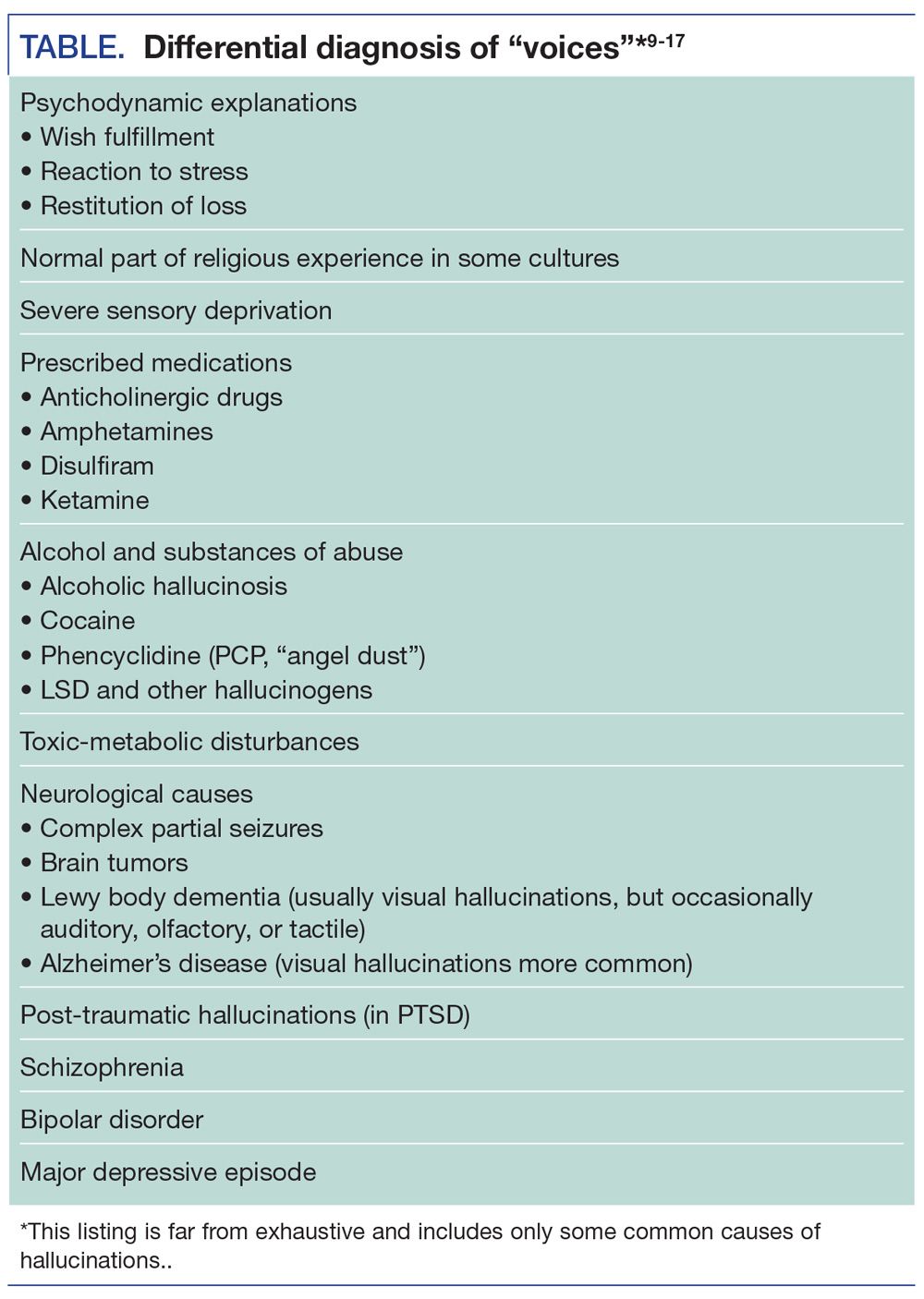 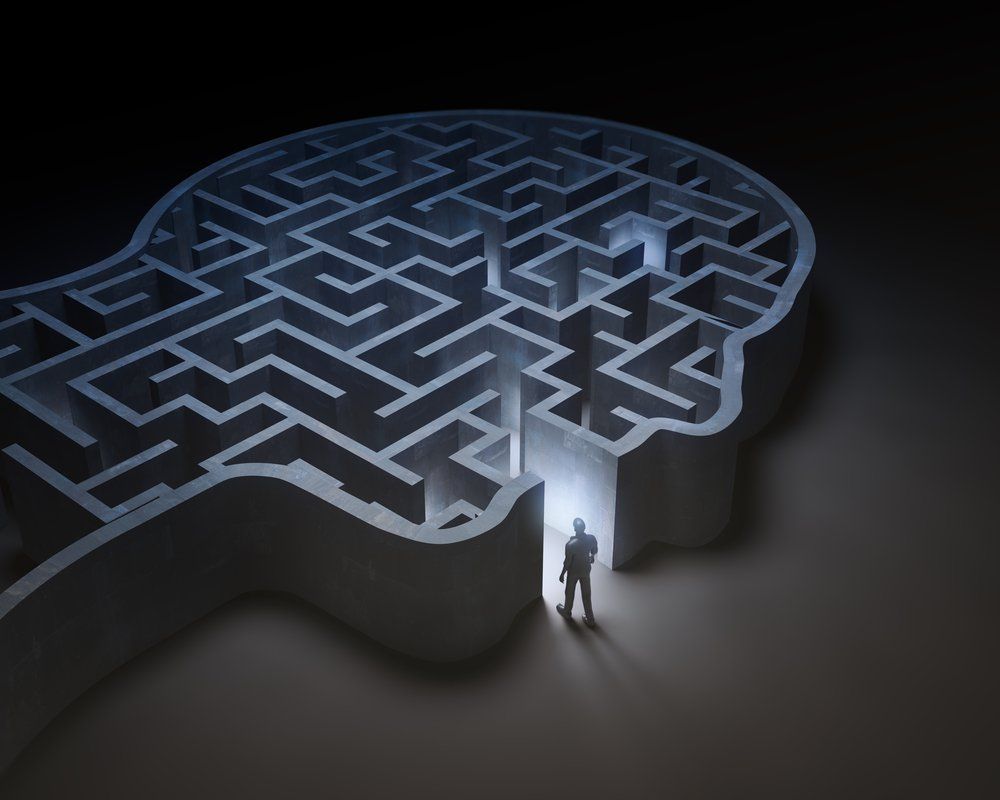 “Most psychiatrists and psychologists are taught that engaging the voices is foolish and dangerous and that their content is random and meaningless.”
-Reader’s comment posted on STAT1

Let’s say you are seeing a recently bereaved woman in her 60s, whose husband died suddenly 2 weeks ago. Her response to the loss is consistent with grief, and she doesn’t fit DSM-5 criteria for a major depressive episode. However, she is anxious and alarmed because, as she puts it, “I heard my husband’s voice, clear as a bell, just as I was going to bed-like he was right there in the room with me! Am I going crazy, Doctor?” Since, as a psychiatrist, you are familiar with normal bereavement, you reassure the patient that auditory or visual hallucinations of the deceased loved one are often experienced during acute grief-and that this is not a sign of psychopathology.2

And yet, one of the enduring myths about psychiatrists is that we rigidly apply “the medical model” to persons who “hear voices”; that is, who have the experience of hearing voices in the absence of any relevant external auditory stimulus. Critics charge that by applying the medical model, psychiatrists “pathologize” a rich, psychologically meaningful human experience.3 Thus, in their report on psychosis, the British Psychological Society states, “At least in the UK, most mental health services are currently based on the ‘medical model’-the assumption that experiences such as hearing voices indicate illness and result from some sort of problem with the brain.”3[PDF]

I believe these critics misconstrue the nature of the medical model used in clinical psychiatry-and often overlook the seminal contributions psychiatrists have made to the psychological understanding of “hearing voices.”

What is “the real medical model” in psychiatry?

The late psychiatrist Gerald Klerman once observed that the term “medical model” “. . . has become a slogan for use in public debate-more an epithet for attacking one’s enemies or a rallying cry for gathering one’s followers than a term of precision for furthering intellectual discussion of scientific discovery . . . .”4

Indeed, there seems to be no universally accepted definition of the medical model, and one’s ideology clearly colors the definitions we do have. The philosopher Dominic Murphy describes 2 versions of the medical model, which he calls the “strong” and the “minimalist” interpretations.5 The strong version of the model “. . . seeks explanations that cite pathogenic processes in brain systems, just as bodily diseases are explained by processes in other organs.” The strong version is often conflated-or used synonymously-with the so-called “biomedical model,” which “. . . posits that mental disorders are brain diseases and emphasizes pharmacological treatment to target presumed biological abnormalities.”6

In contrast, Murphy describes the minimalist version of the medical model as asserting that “. . . mental illnesses are regularly co-occurring clusters of signs and symptoms that doubtless depend on physical processes but are not defined or classified in terms of those physical processes.”5 This “neo-Kraepelinian” version of the medical model is, roughly, the foundation on which the recent DSMs rest.

But there is a much broader and less “biological” version of the medical model, described by Shah and Mountain.7 They define the medical model as simply “. . . a process whereby, informed by the best available evidence, doctors advise on, coordinate or deliver interventions for health improvement.”7 Clearly, the Shah-Mountain formulation requires no assumptions regarding the etiology or biological character of psychiatric illness; rather, it is a pragmatic description of how physicians properly coordinate with other health care professionals.

While all 3 formulations of the medical model have their virtues, they all omit some central philosophical principles which, in my view, underlie the model most psychiatrists actually use in their clinical work. I believe there are 6 fundamental assumptions in what I call “the real medical model” of psychiatry, namely:

1) In so far as human emotion, cognition, and behavior are mediated by brain function, there is always an inherent biological foundation to dysfunctional states, such as clinical depression, psychosis, etc

3) Conversely, biological explanations of human experiences do not negate (and often complement) valid psychosocial and cultural explanations and formulations

4) Biological factors are always part of a comprehensive differential diagnosis of serious emotional, cognitive, and behavioral disturbances-even if, upon careful analysis, psychosocial or cultural explanations prove more relevant or informative

5) That certain human experiences or perceptions (eg, “voices”) have a discernible “meaning,” symbolism, or psychological significance for the patient does not mean they have no neuropathological etiology

There is nothing strikingly original in these principles. But it should be clear that this medical model does not empty the experience of “hearing voices” of psychological meaning; nor does psychiatry’s medical model in any way hold that the content of the patient’s voices is “random and meaningless.” While some psychiatrists may apply a very narrow, reductionistic version of the medical model to the experience of hearing voices-relegating it, perhaps, to the misfiring of some errant dopaminergic circuits in the brain-this procrustean formulation is not characteristic of clinical psychiatry, in my experience. Indeed, many critics of psychiatry have largely ignored the rich contributions psychiatrists have made to the psychological understanding of “hearing voices.”

In his classic 1974 work, Interpretation of Schizophrenia, the psychiatrist Silvano Arieti presents a useful psychodynamic formulation of “hearing voices.” For Arieti-who by no means excludes a neurophysiological basis for auditory hallucinations-the patient “hears voices” in part because she expects to hear them. Arieti calls this “the listening attitude.”8 He gives this example:

[A] patient has the idea that people laugh at him. He actually hears them laughing . . . we must help the patient to recognize that he sees or hears people laughing at him when he expects to see or hear them . . . when the treatment is more advanced, the patient recognizes that he feels people should laugh at him because he is a laughable individual. He hears them laughing because he believes they should laugh at him. What he thinks of himself becomes the cause of his symptoms.8

Arieti may well be right, at least in some instances-but we needn’t agree with him entirely to appreciate that he is not dismissing the content of the patient’s voices as “random or meaningless.” Similarly, in their excellent volume (1987) on psychiatric differential diagnosis, psychiatrists Stephen M. Soreff and George N. McNeil provide an elegant discussion of the psychodynamics of “voices”:

Wish fulfillment creates and propels the hallucinatory experience. Freud made reference to the wish-derived quality and function of the false perception. The hallucination represents an unconscious wish, striving or hope. . . . Hallucinations provide a method to momentarily restore a loss. The [hallucinatory] experience retains in life . . . those who have died or are far away. [For example], after a couple lost their 6-year-old son to leukemia, they frequently heard his voice calling them. Occasionally, the mother saw him standing in the stairway. The voice and image kept him alive and still part of them.9

Psychiatry also recognizes the cultural and religious context in which some people “hear voices”-and the non-pathological nature of such experiences. Thus, DSM-5 notes, “In some cultures, visual or auditory hallucinations with a religious content (eg, hearing God’s voice) are a normal part of religious experience.”

Finally-and here I revert to Principle 4 of psychiatry’s medical model-there is always an extensive medical differential diagnosis involved in the assessment of auditory hallucinations, as Drs. Joseph Pierre10 and Allen Frances11 have noted (Table). Indeed, it is a form of (non-biological) reductionism to assume that “hearing voices” always-or even usually-represents solely a psychodynamic issue; a “normal experience”; or an expression of one’s culture, void of any neuropathology. Of course, auditory hallucinations may result from a medical or neurological condition and still have “meaning” or psychodynamic significance for the patient.

Some critics of psychiatry have rightly objected to “. . . a reductionistic biomedical model that is practiced in numerous hospitals in the Western world” in which “…voice-hearing [is] seen as a meaningless symptom of disease.”12 While this sort of biological reductionism doubtless occurs in some medical settings, it is not the “medical model” of academic psychiatry, or-in my view-of most experienced psychiatrists. We must guard against simplistic theories on both sides of the ideological divide: those that construe every human phenomenon in terms of misaligned molecules, and those that mistakenly impute “normality” to serious pathological conditions.

This article was originally posted on 8/3/17 and has since been updated.

Editor's note: We respectfully encourage all readers to "sign in" by typing your name and professional background after your comment. You can "reply" to your own post, and do this retroactively.

Dr Pies is Editor in Chief Emeritus of Psychiatric Times, and a Professor in the psychiatry departments of SUNY Upstate Medical University, Syracuse, NY, and Tufts University School of Medicine, Boston. His most recent book is Don't Worry-Nothing Will Turn Out All Right!. His full bui can be found here.

6. Deacon B. The biomedical model of mental disorder: a critical analysis of its validity, utility, and effects on psychotherapy research. Clin Psychol Rev. 2013; 33:846-861.