This Special Report on stress and trauma brings together five topics that are neglected in the current literature.

This Psychiatric Times Special Report on stress and trauma brings together five topics that are neglected in the current literature. Dr Morganstein, who wrote the CME article this August, points out that physician work-associated traumatic events are both common and unavoidable. Causes of physician work-associated trauma include medical errors leading to significant patient harm, disasters where health care workers are both provider and victim, and workplace violence such as bullying.

Common responses to traumatic events include distress reactions, health risk behaviors such as increased substance use and decreased social activity, and psychiatric disorders. The goal of intervention is to reduce levels of distress in affected physicians, restore their ability to provide care, and minimize the likelihood of lasting symptoms or impairment.

Interventions for traumatic stress should incorporate the principles of Psychological First Aid: safety, calming, self-efficacy, connectedness, and optimism. Providing a range of patient-centered, evidence-based interventions and formal treatment options can enhance compliance and increase well-being for physicians who have experienced traumatic events.

Stigma continues to serve as a barrier to help-seeking for physicians, especially given that physicians may face punishment in the form of pay loss or practice restrictions for coming forward about mental health challenges. Dr Morganstein advocates for employee assistant programs and other early interventions to reduce the likelihood of symptom escalation following work-associated traumatic stress.

Dr Waits reviews the literature that shows the promising results of Accelerated Resolution Therapy (ART) as a treatment for PTSD. A theory for ART’s effectiveness, including a possible mechanism of action, is provided. However, Dr Waits provides a significant disclaimer regarding eligibility for ART: the “unmotivated patient should not be offered ART.” Two case examples illustrate the recovery of patients with PTSD as exemplified by a decrease in patient health care utilization following completion of ART.

Drs Malaktaris and Lang provide a comprehensive summary of complementary and integrative health (CIH) techniques that enhance PTSD treatments. Explanation of techniques, such as meditation or yoga, are followed by descriptions of evidence for each method. Recommendations and cautions to implementation are clearly described for each technique. Consistent among all treatments discussed is a lack of randomized controlled trials supporting their use. Therefore, most CIH methods are indicated as complements rather than replacements for existing therapies.

Not all CIH approaches appear equally promising in the treatment of PTSD, but research in this area is rapidly evolving. Given the relative lack of rigorous, well-designed trials to evaluate the efficacy, safety, and specificity of CIH approaches, CIH appears best applied as an adjunct to other treatments or for individuals who initially refuse or don’t tolerate other evidence-based approaches.

There is a discrepancy in the prevalence of PTSD between older adults and younger adults; findings indicate that the latter experience higher rates of PTSD and increased risk of other comorbid psychiatric disorders. Drs McCarthy and Cook suggest that older adults may not recognize or be willing to admit trauma or its impact.

Research suggests older adults with chronic PTSD are more likely to have a disability or dementia than those who do not have PTSD. Recommendations for health care providers on how to tailor psychotherapy to meet specific needs of older adults are summarized in the article. The recommendations include using repetition to address decreased learning rates from aging and coordination with other health care providers to address concurrent health problems. The article concludes with advice to future researchers and a caution to current providers that the bulk of the literature on traumatized older adults focuses on often white male veterans and that more research is needed to determine generalizability of findings to date.

The preliminary success of electroconvulsive therapy (ECT) on treating PTSD suggests ECT could serve as a complement to existing PTSD treatment and that more rigorous randomized controlled trials could provide evidence for ECT as a standalone treatment for PTSD. Dr Youssef strongly advocates for continued research and implementation of ECT and addresses changes and improvements in ECT over the last few decades. ECT technology has become safer with fewer risks of adverse cognitive effects.

Hippocampal neurogenesis is a proposed mechanism of action to explain how ECT improves PTSD symptoms-preclinical studies have found that electroconvulsive stimulation can induce neurogenesis and neuroplasticity. Dr Youssef proposes a few other possible mechanisms, such as traumatic memory deconsolidation.

Dr Youssef explains that it is worth exploring ECT as a potential treatment for PTSD since “a high percentage of patients [with PTSD] still do not achieve remission (or response) from multiple trials of both pharmacotherapy and psychotherapy.” The preliminary data on the role of ECT in PTSD seems promising. However, although human studies to date are positive, the studies so far are preliminary and publication bias where negative studies may not have been published cannot be ruled out. Thus, a definitive, well-powered, randomized controlled clinical trial to confirm or revoke the initial studies is warranted, especially given the severe burden, grave suffering and treatment-resistance of standard therapeutics in many patients recovering from PTSD.

In this Special Report

Treating Recalcitrant PTSD With ECT: Are We There Yet?

Dr Davis is Associate Chief of Staff, Research and Development Service, Tuscaloosa VA Medical Center, Tuscaloosa, AL; and Professor of Psychiatry, University of Alabama School of Medicine, Department of Psychiatry, Birmingham, AL. Dr Davis reports that she has no conflicts of interest concerning the subject matter of this Special Report. 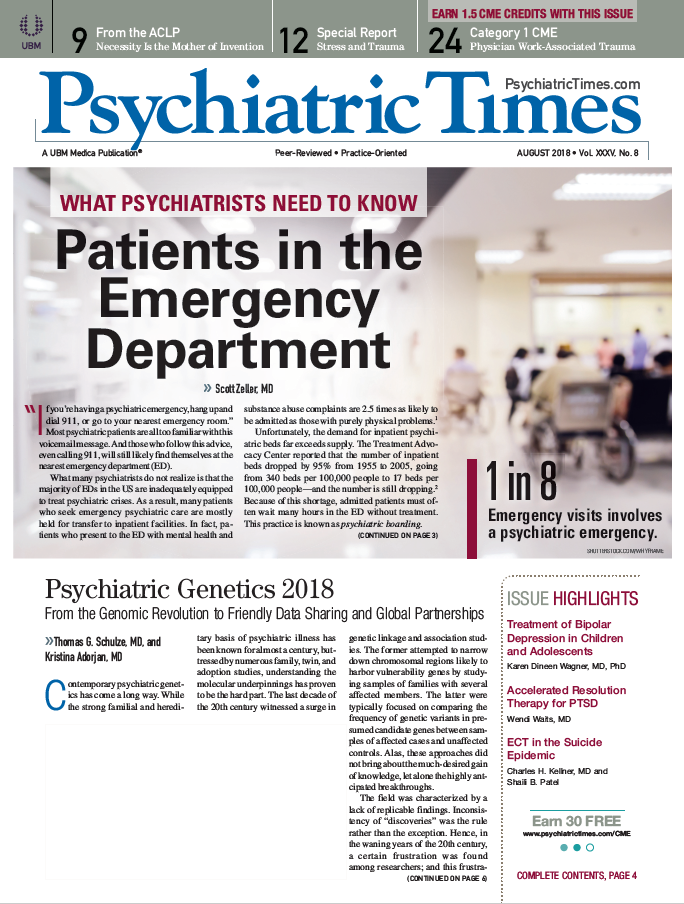