Marijuana, Alcohol. . . and Me

President Obama has told his daughters that that he thinks smoking marijuana is a "bad idea." I will tell my grandchildren the same thing. But what do I know? Not a whole lot, I'm afraid. How about you? 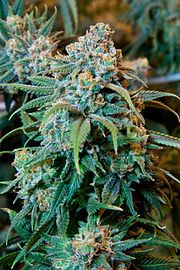 "I don't think it is more dangerous than alcohol."

I'm by no means an expert in marijuana or medical marijuana. In that regard, I'm just the average psychiatrist. For this blog, to keep my innocence, I've done no more research on the subject other than having read articles on marijuana that caught my eye recently in the media I usually read.

While I was practicing, I certainly had patients for whom marijuana was quite important. It seemed to be the only way they felt socially comfortable. More often than not, psychotherapy never adequately replaced the marijuana. There was never any substitute medication that could achieve anything similar to marijuana’s effects, nor was there anything useful for detoxification, like benzodiazepines are for alcohol. Maybe some of these patients from years back had Asperger's Syndrome, from a time when we didn't know much about that. Many times I saw them because the cannabis usage seemed to get to extremes, so that functioning in everyday life was compromised by lethargy or disinterest.

In my personal life, I was probably an average citizen, perhaps like our recent Presidents. President Clinton admitted using, but not inhaling. President Obama admitted using socially. He was recently quoted as saying: "I don't think it is more dangerous than alcohol." I didn't catch what he told his daughters about alcohol, but he has told them that he thinks smoking pot is a "bad idea." The younger President Bush did not admit using marijuana as far as I know, but certainly did admit to major trouble with alcohol at one time. All became Presidents despite their use of marijuana or alcohol.

I'll confess, too, that I used marijuana socially during my psychiatric residency, way back in the early 1970s. That turned out to be a mistake. After some pleasant experiences, one seemed very different. Perhaps the potency was different or it was laced with something else, but I ended up in a sort of dissociative state--a very frightening nightmare-like state of mind, which I can recall quite clearly. Now, it seems more like a very "bad trip," but back then I sometimes thought I was more psychotic at times than some of my psychotic patients. I could barely work. Fortunately, my teachers were very kind, compassionate, and helpful, just as they were previously when I had a patient suicide (see blog posted October 2, 2013 on "Psychiatry, Religion, and Suicide"). Either through time and/or brief psychodynamic psychotherapy, I seemed to recover fairly quickly and got back to work as usual. I never ever used marijuana again, nor any other kind of street drug. I'm overly cautious about using pain medications. I've continued to use alcohol socially, with much moderation. At its best, I suppose, that particular experience with marijuana gave me extra empathy into altered states of mind in patients, sort of like I experienced when I tried Thorazine to see how patients might feel when taking it.

So what do I think about medical marijuana and the legalization of marijuana in some states? My clinical experience is that marijuana can be therapeutic in some unique ways that can be comforting and/or healing-- for certain medical illnesses or psychological states. If legalizing can control for dosage and purity, all the better. If legalizing can isolate the helpful ingredients and reduce potential side effects, that would be another plus. If these new laws contribute to being able to do better controlled research trials, including developing something better, that would be a boon.

Alcohol seems to be much riskier in a physiological sense to the brain and liver organs, especially when it becomes chronically addictive.

Of course, we don't yet know what the long-term effects will be of legalized marijuana. In my work as a prison psychiatrist, though, the untoward results of alcohol-including from driving under the influence-seemed much more common and deadly than marijuana.

I will say the same thing as President Obama to my grandchildren. But what do I know? Not a whole lot, I'm afraid.