I’ve written about poker nearly as long as I’ve been playing it. I observed in these pages years ago that the game can be a great revealer of-but sometimes a great destroyer of-character, especially when one harbors the psycho-social and hereditary/genetic potential for compulsive gambling.

Gambling humor embraces the dark side. Poker argot is especially mordant. “Where’s Lennie?” asked one of my high-rolling patients about a legendary loser, absent from the tables for several months.

Came the laconic reply: “Lennie is in Poker Hospital…” meaning he was broke beyond redemption…possibly disappeared himself to elude loan shark thugs who would assuredly be playing castanets on his kneecaps with hammers if he didn’t pay up.

Molly Bloom, feisty heroine of the eponymous Molly’s Game, wound up in poker hospital not from playing, but from running lavish underground poker games in LA and NY. Her “clients” were major Wall Street sharks, glitterati from the worlds of entertainment, sports, politics, and-to her final undoing-kingpins of the Russian mob.

No-Limit Texas Hold-em is the most popular form of poker today. You can easily google the rules, but it’s more enjoyable to learn them by watching Rounders (1998), the best poker picture ever lensed.

Each player-10 maximum-is dealt 2 down cards, which are then combined with a “window” of 5 common pasteboards. Betting proceeds before and after the window is flopped. The best 5-card hand wins.

The game looks disarmingly simple. In fact, it’s alarmingly complex. Any player can go “all in”-bet his or her entire stack-at any time during a round. The ability to bluff and suss out bluffing is crucial. Played for high stakes, the game requires extraordinary patience and battlefield courage. You strive to keep your head on straight during hours of boredom, punctuated by moments of sheer terror.

Fine players carefully bide their time until the right terrifying moment comes along. But Molly’s punters were action junkies, many pathological gamblers who were always all in, creating stratospheric pots. Molly was especially adept at winkling out “fish,” poor players with deep pockets, able to sustain formidable losses and come back week after week for more .

She took great pride running a legitimate game in a milieu prone to knavery. She paid her employees-dealers, servers, security-on the books, kept scrupulously to the letter of ambiguous gaming laws. She lived large, but only on big weekly tips.

Sorkin’s skillset satisfyingly drives the picture until an unfortunate conclusion, of which more presently. (Molly is stunningly played by Jessica Chastain). In the scorching establishing sequence, Federal agents summarily yank Molly out of bed and into the slammer for illegal gambling. Her arrest came several years after she had closed her operations.

The feds actually cared little about Molly’s games. They jailed her with the goal of compelling her to rat out 30 badfellas under indictment who had played at her tables. But Molly refused to co-operate. She had substantial knowledge about her players’ private lives, and refused to break confidentiality so as not to shame them and their families. Their outside business wasn’t her business.

Molly’s father (a one-note gruff Kevin Costner) is a charismatic psychology professor, who relentlessly helicoptered Molly and her 2 brothers to become academic and athletic super achievers.

We infer that the brothers accepted, indeed flourished, under their father’s iron tutelage. Molly brashly challenged and disrespected him at every step; yet identified with his Ayn Randish vision of a world in which the meek are crushed and the elite rewarded.

Molly rose to early prominence in breakneck downhill ski racing, until a freak accident demolished her career. She migrated to LA against her father’s wishes and without his support. She became the factotum of a repellant Hollywood wanabee mogul. She serviced, then stole his game; eventually moved to Manhattan, where she ran more games at higher stakes.

Her judgement eventually deteriorated under escalating self-generated stress. She became drug-addicted, brought key Russian mobsters and an FBI informant to her tables. After refusing to partner up with the Mafia, she was shockingly beaten, then recovered her senses; fled back to California, got herself straight, and lived under the radar until her arrest. Making bail reduced her to penury. The Feds had already confiscated her savings, and taxed them to boot.

Molly’s players were all men; and crooked timber to a man. Their crude narcissism could gag a goat. The majority constituted an omnium gatherum of gambling addicts-perennial chasers after Lady Luck-massive losers who offered every rationale in the sordid book for behavior ruinous to others as themselves. Her biggest winner, no addict, was an odious predator who delighted in demolishing his opponents’ self-esteem as much as savaging their bankroll. Molly’s prosecutors are portrayed as no less repugnant. Utterly devoid of pity, they’d happily let her rot in jail if she didn’t co-operate. (Intriguingly, her punters from the Russian mob left their vicious psychopathy outside Molly’s doorstep: in the film they come across as hapless, even likeable schlubs.)

Charlie Jaffey (the estimable Idris Elba), a prominent criminal lawyer, proves a shining exception to the prevailing male grottiness. Jaffey’s fee is high as his probity. He takes her case-probably pro bono-because he’s captivated by her sass, wit, and staunch, if naÃ¯ve to compromise her people. By her lights, what went on outside the game room-sports betting, prostitution-weren’t her concern. All that mattered was running a pleasurable, profitable man-cave.

At the end, her case is unexpectedly thrown out by a benevolent judge. Her father also shows up with glib park bench psychoanalyzing, and a sappy declaration of love, dripping with crocodile tears. The reconciliation sequence strikes precisely the wrong bathetic note, in a solidly winning picture with a hollow Tinseltown heart. Watching it is akin to quaffing a good wine with a two-buck-chuck finish.

Molly’s Game has generally drawn excellent reviews. A few dissenters complained that Molly comes across as a stick figure, sans depth and complexity. Hollywood usually doesn’t “get” pathological gambling, glamorizing or demonizing it. Whatever his penchant for wearisome liberal pieties, Sorkin deserves credit for being spot on about the disorder’s psychopathology.

Pace the Goldwater ruling, the onscreen Molly Bloom’s shallowness isn’t due to vapid scripting, but the peculiar alexithymia native to the pathological gambler’s persona, which breeds massive unknowningness about inner life and motivations.

By this token, Molly is absolutely unable to register the dubious legality-and morality-of her games. Her insensate craving for “action” is another classic manifestation of the disorder: it precipitated the sinister slalom that ground down her ego strength and eroded her mortality (one notably sees this in end-stage gambling).

Molly also is fatally susceptible to the “gambler’s fallacy”-the unshakeable conviction that no matter how dire her straits, the odds will inevitably turn in her favor. Her gallows humor comprises yet another signature of the disorder.

I’ve elsewhere described pathological gambling as the dark underbelly of the American dream. It’s implied that by nurture or nurture, Molly has inherited her father’s cynical world view: if you’re not a stone-hearted winner, you’re a feckless loser.

Sorkin leaves Molly existentially unmoored, broke but not broken, already scanning the horizon to reinvent herself in some fashion. Given the dog-eat-dog tenor of the (Washington) times, her character pathology, ferocious intelligence, and ruthless ambition would seem to make going into politics a viable career option.

NB: For more information on pathological gambling, the reader is directed to Dr. Greenberg’s chapter on the subject in the latest edition of the Comprehensive Textbook of Psychiatry. His review of Rounders, which originally appeared in the now defunct Poker Pro magazine, can be found on the internationalpsychoanalysis.net website. https://goo.gl/mjgPxJ

This article was originally published on February 13, 2018 and has since been updated. 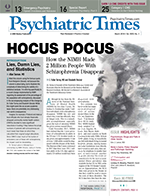 PTSD in Late Life: Special Issues
Timolol Does Not Cause Psychosis
QT Prolongation and Antidepressants
Molly’s Game: Poker Hospital and Pathologic Gambling
The Juggler
What’s in a Name? Name Changes for Subspecialty and the Academy of Psychosomatic Medicine
Genetics in the Clinical Setting: The Role of Psychiatric Genetic Counseling
Advantageous Adages in Psychodynamic Psychotherapy
Lies, Damn Lies, and Statistics
HOCUS POCUS: How the NIMH Made 2 Million People With Schizophrenia Disappear
On the Prevalence of Schizophrenia and Transforming Care Through Research
Related Videos
Related Content