New compounds and novel applications for established products were evaluated in many of the clinical trials reported at the recent 49th annual NIMH-sponsored New Clinical Drugs Evaluation Unit meeting. 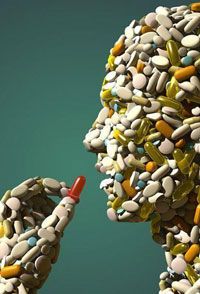 New compounds and novel applications for established products were evaluated in many of the clinical trials reported at the recent 49th annual NIMH-sponsored New Clinical Drugs Evaluation Unit meeting.

A phase 2 trial with a dopamine D3/D2 receptor antagonist caripra-zine (RGH-188, Forest Laboratories) yielded encouraging results in patients with bipolar disorder. The trial with 118 participants was a flexible-dose study, using the Young Mania Rating Scale (YMRS) as the primary efficacy measure. Mary Ann Knesevich, MD, University Hills Clinical Research, Irving, Tex, indicated that drug effects were observed “on a broad range of symptoms.” There was significantly greater change from baseline at 3 weeks in each YMRS item than occurred with placebo. The principal adverse effects with cariprazine were extrapyramidal reactions and headache.

The participants were randomized to 6 weeks of treatment with 1 of 2 doses of the investigational agent, placebo, or venlafaxine (Effexor) titrated to 150 mg a day as an active reference. lvarez reported that both doses of the new agent were superior to placebo and comparable to venlafaxine for symptoms of both anxiety and depression. The most common adverse effects with the investigational agent were nausea, headache, hyperhidrosis, and dry mouth.

Lurasidone (Dainippon Sumitomo Pharma) is being investigated in phase 2 and phase 3 trials in the treatment of patients hospitalized with acute exacerbations of schizophrenia. The agent has a high affinity for dopamine D2 and serotonin 5-HT2a receptors, as well as several receptors the investigators indicate are “implicated in the enhancement of cognition, mood, and negative symptoms,” including serotonin 5-HT7 and 5-HT1a.

Josephine Cucchiaro, PhD, Dainippon Sumitomo Pharma, presented results from 3 trials of lurasidone using daily doses of 40 to120 mg. Higher dosages were associated with greater therapeutic effects, measured on the Positive and Negative Syndrome Scale and the Brief Psychiatric Rating Scale–derived. The agent was “generally well tolerated,” Cucchiaro indicated, “with few discontinuations due to adverse effects, and minimal effects on weight, lipids, and glucose.”

Maurizio Fava, MD, Massachusetts General Hospital, Boston, described a proof-of-concept study in which buspirone and melatonin in a proprietary combination, BCI-952, were employed for treatment of depression. Although the individual components are not associated with antidepressant effects, the combination was found in preclinical assessment to enhance hippocampal neurogenesis, a property that researchers at Brain Cells Inc, San Diego, have associated with the action of antidepressants.

In this preliminary study of 142 patients with depression, those who received BCI-952 achieved statistically significantly greater improvement on the Clinical Global Impression scales for severity and im-provement (CGI-S and CGI-I) than those who received placebo. Fava characterized the study as “the first demonstration that rational drug discovery utilizing a preclinical neurogenesis platform can be applied to the treatment of [major depressive disorder].”

The relatively benign adverse-effect profile of gabapentin makes it an attractive neurological agent to evaluate for new applications. Barbara Mason, PhD, Scripps Research Institute, La Jolla, Calif, reported on a double-blind, placebo-controlled trial of gabapentin in 50 treatment-seeking patients who met DSM-IV criteria for cannabis dependence. Mason and colleagues sought to determine whether gabapentin might affect disturbances in sleep and mood and the craving following cannabis cessation that can motivate relapse.

Participants were randomized to 12 weeks of treatment with 1200 mg of gabapentin daily or placebo, and efficacy was determined through assessments of mood, sleep, and cannabis use. Mason reported that compared with placebo, those who received gabapentin exhibited significantly less consumption in grams per week, less craving, and greater improvement on the Beck Depression Inventory and on the Pittsburgh Sleep Quality Index.

“A withdrawal syndrome characterized by an aggregate of superficially mild symptoms may be particularly responsive to treatment with a neuromodulating drug like gaba-pentin,” Mason said. “Thus, the development of gabapentin as pharmacotherapy for cannabis dependence may have potential public health benefits.”

Naltrexone, currently used for both opioid and alcohol dependence, was investigated to determine whether this opioid antagonist could interfere with reward mechanisms that might reinforce the compulsion for kleptomania. Jon Grant, MD, JD, MPH, University of Minnesota, described an 8-week study of 25 subjects meeting DSM-IV criteria for kleptomania, randomized to receive either placebo or naltrexone at a daily dose ranging from 50 to 150 mg. Those who received naltrexone exhibited statistically significantly greater improvement in the Yale-Brown Obsessive Compulsive Scale modified for kleptomania on items related to stealing and stealing behavior. In addition, naltrexone was associated with greater improvement in overall kleptomania severity than placebo, as reflected in reduced CGI scores.

The N-methyl d-aspartate (NMDA) antagonist memantine, approved for the treatment of moderate to severe Alzheimer disease, was investigated in a study funded by the manufacturer, Forest Pharmaceuticals, for neurocognitive deficits associated with bipolar disorder. An additional study, self-funded at the Massachusetts General Hospital, assessed the use of memantine in adults with attention deficit disorder.

Michael Ziffra, MD, Northwestern University Feinberg School of Medicine, Chicago, indicated that neuro-cognitive deficits can persist in many patients with bipolar disorder even though they have achieved mood stability. Although little is known about treatment requirements, researchers were hopeful that memantine might be therapeutically effective.

The trial was conducted with 25 adults who were euthymic with conventional treatment of their bipolar illness. They were randomized to receive 12 weeks of either placebo or memantine titrated to 20 mg daily; with an optional additional 12 weeks of open-label memantine. Cognitive functioning was principally assessed by mean total score of the Repeatable Battery for the Assessment of Neuropsychological Status (RBANS).

“This suggests that acute treatment with memantine has limited cognitive benefit,” Ziffra indicated, “but longer treatment may lead to more global improvement.”

The apparent benefit of memantine for attention items on the RBANS, albeit in a population with bipolar disorder, supports the investigation by Craig Surman, MD, and colleagues at Massachusetts General Hospital in adults with ADHD. Although NMDA receptors have been theorized to contribute to the pathophysiology of ADHD, Surman indicated that this open-label investigation in 27 persons is the first assessment of memantine for this condition.

Memantine was titrated to a dose of 20 mg daily, and a battery of tests were used to assess effects on attention, hyperactivity, and impulsivity. Surman reported significant improvement at weeks 2 through 12, with most adverse effects characterized as mild. Although double-blind investigation will be needed to corroborate the preliminary findings of this open trial, the researchers were encouraged.

“Memantine may be effective for, and well tolerated by, adults with ADHD or ADHD NOS,” Surman indicated, “and may improve working memory in this population.”