Members of the military returning from combat operations have high rates of substance abuse. They also often exhibit a co-occurring triad of posttraumatic stress disorder (PTSD), traumatic brain injury (TBI), and pain, which complicates the problems with substance abuse. 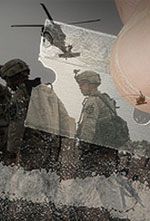 Members of the military returning from combat operations have high rates of substance abuse. They also often exhibit a co-occurring triad of posttraumatic stress disorder (PTSD), traumatic brain injury (TBI), and pain, which complicates the problems with substance abuse.

After detailing what is known concerning the epidemiology of substance abuse among military members and veterans and how substance abuse relates to these other disorders, this article offers some thoughts about the assessment and management of substance use disorders in these populations.

Considerable knowledge exists about alcohol use among military members, some knowledge exists about tobacco use, but only scant data inform us about use of other substances. Even before there were extensive deployments to Iraq and Afghanistan, a large-scale survey found that prevalence of frequent, heavy drinking in the military from 1980 through 2005 ranged from 15% to 20%.1 A subsequent survey of 88,205 soldiers recently deployed to Iraq showed that 12% to 15% screened positive for alcohol problems.2 Rates of binge drinking were 53% in a sample of recently deployed personnel with combat exposure.3

In a 2-item survey of 6527 US Army soldiers who were screened after returning from deployment to Iraq, 27% screened positive for alcohol misuse, and rates of drinking and driving and reporting late to duty because of hangovers were high.4 In a separate survey of 1120 recently deployed soldiers, 25% screened positive for alcohol misuse and 12% for alcohol-related behavioral problems. Exposures to life-threatening situations and to atrocities were significantly associated with a positive screen.5

Data also show increasing use of opioids by veterans. One study found that in 2% of veterans who had received opioid therapy for chronic pain, opioid addiction subsequently developed; this addiction was predicted by the presence of a psychiatric disorder.11 Another study found increasing rates of opioid use for pain among veterans aged 18 through 30 years between 2003 and 2007.12 Consistent with these data, the number of veterans in whom opioid addiction has been diagnosed has increased in recent years (Table 1).

Table 1 also shows rates of diagnoses of other substance use problems among veterans treated at US Department of Veterans Affairs (VA) medical centers in recent years, with alcohol and cocaine use disorders being the most common. Part of the increase in numbers is accounted for by an overall increase in numbers of veterans seen at VA medical centers, but some of the increase stems from higher proportions of veterans with substance use disorders in the overall VA population. In addition, Table 1 documents the high co-occurrence rates of PTSD among veterans being treated for substance use disorders.

Consistent with findings from other studies noted above, veterans from the Iraq and Afghanistan wars who seek treatment for PTSD do have high rates of alcohol use disorders compared with the general population, although combat veterans from earlier eras who seek treatment for PTSD have even higher rates of alcohol use disorders and drug use disorders. These findings raise the possibility that Iraq and Afghanistan veterans, like veterans before them, are at risk for an increasing incidence of substance use disorders over the coming years and that aggressive early intervention is warranted now.

It appears that 20% to 30% of military members returning from Iraq or Afghanistan may have a TBI.14,15 A study of discharges from the active duty military in 1992 found 2243 cases of head injuries in 1,879,724 active duty members. Compared with the non–head-injured military population, discharge rates for alcoholism or drug use were 2.6 times greater for mild TBI and 5.4 times greater for moderate TBI.16 Subtle frontal lobe impairments with decrements in executive function certainly could make TBI patients more vulnerable to substance abuse.

A systematic review of the association between TBI and pain noted 3 studies of 917 combat veterans with head injury, with 43.1% who complained of pain.17 One of these studies that examined the relationships between TBI, PTSD, and pain found that among soldiers recently deployed to Iraq, those with mild TBI were significantly more likely to also have PTSD and headache than were soldiers without TBI.18 In veterans receiving substance abuse treatment, there were high rates of pain complaints, mostly related to musculoskeletal conditions. Pain in this cohort was associated with poorer treatment outcomes and higher health care utilization and costs.19

Ultimately, diagnosis of a substance use disorder or PTSD relies on clinical assessment using DSM criteria. Screening instruments exist that can help uncover or point the way toward a potential diagnosis. For alcohol use disorders, the Alcohol Use Disorders Identification Test (AUDIT) and the AUDIT-Consumption (AUDIT-C) have been widely validated as self-report screening measures.20,21 A single-item screening measure was recently validated for drug use disorders consisting of the single question, “How many times in the past year have you used an illegal drug or used a prescription medication for nonmedical reasons?” A response of 1 time or more yields a positive screen.22

What new information does this article provide?
? This article compiles current information that suggests that addiction problems, posttraumatic stress disorder, traumatic brain injury, and pain tend to co-occur among veterans, and it explores potential avenues for integrated treatment of these co-occurring conditions.

What are the implications for psychiatric practice?
? Psychiatrists need to be alert for this constellation of problems among veterans with addiction and be prepared to manage all of these co-occurring conditions.

The PTSD Checklist has well-supported validity as a self-report screening instrument for PTSD.23 The Clinician-Administered PTSD Scale provides a comprehensive diagnostic assessment of PTSD according to DSM criteria but requires a trained clinician to administer it.24

Screening for and diagnosis of milder forms of TBI use somewhat complex algorithms, and optimal approaches are still being studied.25

Overall, military members and veterans with uncomplicated substance use disorders would be expected to respond to the typical behavioral and pharmacological interventions demonstrated to have general effectiveness. In the behavioral realm, various forms of cognitive-behavioral therapy (CBT),26 12-step facilitation therapy, and contingency management have all been effective in treating veterans.26,27

Naltrexone and disulfiram have been shown to be beneficial for the treatment of alcohol dependence, as have methadone maintenance and buprenorphine for opioid dependence.28-30 Naltrexone, particularly the long-acting injectable formulation, warrants further exploration for opioid dependence in veteran populations. Nicotine replacement therapy, bupropion, and varenicline have also been used successfully for the treatment of nicotine dependence in veterans.31,32

This finding supports the idea of integrating treatment for co-occurring PTSD and substance abuse in a single package. A form of group CBT, Seeking Safety, was developed to treat the two disorders simultaneously in women.34 Although there is little evidence for its efficacy above what would be obtained with separated treatments, its concept has sufficient appeal to both providers and patients that its clinical application has rapidly expanded to include both female and male veterans.35

McFall and colleagues31 recently demonstrated that integrating smoking cessation treatment with mental health care for veterans with PTSD produced significantly better smoking quit rates without any negative impact on PTSD outcomes. The success of this model warrants adapting and testing it for veterans with other substance use disorders.

Recent work also provides encouragement that some medications can simultaneously treat substance abuse and PTSD. The antihypertensive medication prazosin, which blocks a1-adrenergic receptors, has been studied for more than a decade by Raskind and colleagues38 as a treatment for PTSD-related nightmares and other symptoms and has come into fairly widespread use.39 Recently, in a small, double-blind, placebo-controlled trial, prazosin significantly reduced alcohol use in alcohol-dependent men without PTSD, which suggests that it may have independent efficacy for alcohol dependence.40 Trials are now under way to explore the efficacy of prazosin for patients with co-occurring alcohol dependence and PTSD.

Topiramate, an anticonvulsant that enhances function of γ-aminobutyric acid, is effective for reducing alcohol use in alcohol-dependent persons.41 Preliminary work suggests that topiramate might also be effective for PTSD.42 Should this hypothesis be verified, topiramate could be explored as a single pharmacotherapy for co-occurrence of both disorders. As a cautionary note, topiramate can cause memory impairment so it would have to be used with extreme caution in patients who also have TBI.

Substance abuse treatment for patients with co-occurring TBI and/or pain has not been sufficiently studied. It seems probable that subtle deficits in memory, attention, and impulse control frequently seen in TBI patients would render them less amenable to treatments such as CBT that rely on assimilation of verbal material.14 Early evidence suggests that patients with TBI and substance use disorders respond well to contingency management.43 It remains to be determined whether integrated treatment for pain and substance abuse would improve outcomes for active troops and veterans who have both problems.

High rates of substance use problems among active troops and veterans certainly warrant attention, particularly for the younger cohorts of these populations. Intervention now could prevent a lifetime of worsening impairment and disability. The co-occurrence of PTSD, TBI, and pain in active troops and veterans with substance use problems will require future innovations for optimum treatment, since it is not entirely clear that standard treatments for substance use disorders will have sufficient efficacy in persons with this constellation of problems. Careful and complete diagnosis is essential before treatment is initiated.

Although it is time-consuming, is burdensome to patients, is costly, and requires expertise in neuropsychology, assessment and understanding of cognitive deficits present in patients may enhance outcomes and ultimately improve treatment efficiency. Further investigation and implementation of behavioral treatments that address this constellation of disorders simultaneously seems warranted. The additional study of pharmacological interventions that have simultaneous efficacy across these disorders is needed.

39. Harpaz-Rotem I, Rosenheck RA. Tracing the flow of knowledge: geographic variability in the diffusion of prazosin use for the treatment of posttraumatic stress disorder nationally in the Department of Veterans Affairs. Arch Gen Psychiatry. 2009;66:417-421.