The Role of Psychiatrists in Countering Violent Extremism

There is no predictive tool that is likely to have validity for rare outcomes such as terrorist attacks. More here. 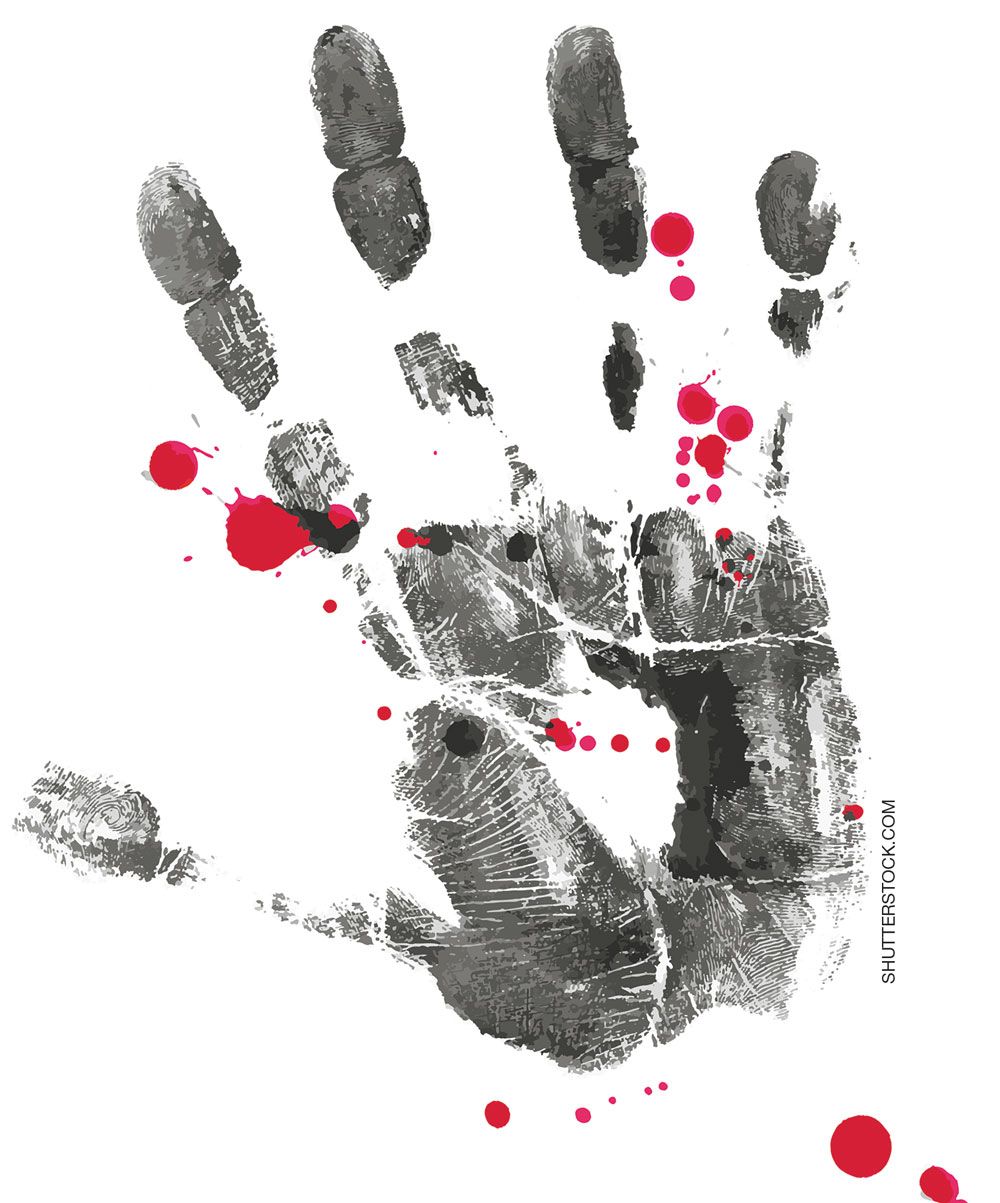 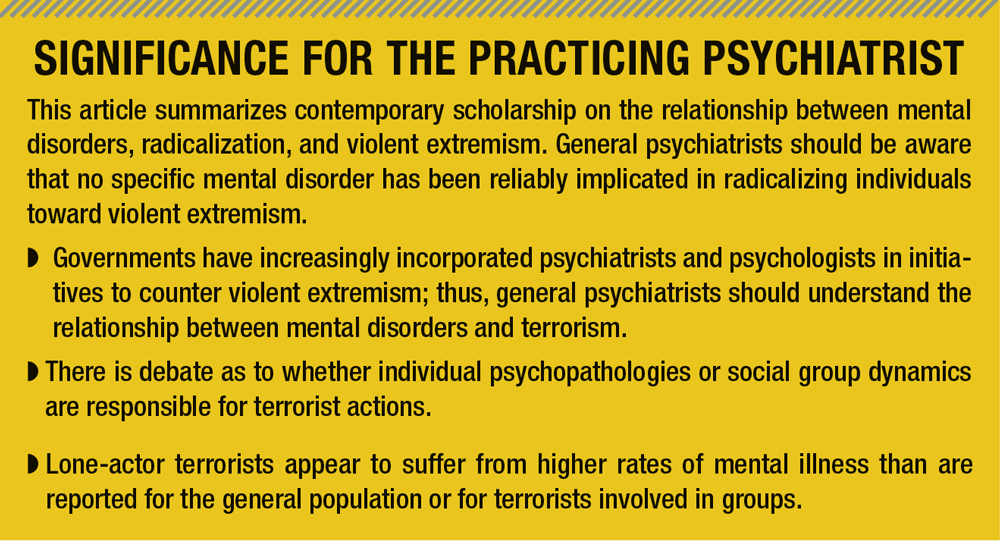 In February 2015, President Barack Obama hosted a White House summit on countering violent extremism (terrorism), mobilizing stakeholders from over 60 countries across civil society, the private sector, government, and international organizations against the violence posed by non-state militants such as Al Qaeda, the Islamic state, and the Taliban. The government’s attempts at a unified policy response have culminated in a 2016 report published by the US Department of State and the US Agency for International Development (USAID) that defines violent extremism as follows:

The evidence for mental health is also mixed. Most research on violent extremism -defined here as the threat of real or perceived violence against civilians -has been conducted in relation to conflict zones and in the fields of political science and international relations to examine violence against social, political, and economic variables. No study has reported the prevalence of terrorist thoughts or behaviors, or isolated the relationship between mental disorders and terrorism, in the general population. Hence, epidemiological statistics are unavailable. In fact, it would be difficult to conduct such studies, since respondents would risk self-incrimination.

Still, terrorism poses sufficient danger to public safety that psychiatrists would benefit from an awareness of general issues, especially because initiatives to counter violent extremism are increasingly calling on mental health professionals to participate. Indeed, the initiatives touch upon subjects of abiding interest in psychiatry such as the delineation of normal versus abnormal thoughts, emotions, and behaviors and violence risk assessments.

Furthermore, literature reviews of medical databases demonstrate that publications from psychiatrists or psychologists on factors inciting individuals toward terrorism tend to engage in personal speculation, syntheses of theoretical models, or forensic case studies that apply psychological theories with hindsight to explain violence, not research with suspected or actual terrorists whose findings could inform clinical practice. Hence, psychiatrists interested in contributing to initiatives to counter violent extremism need a foundation in what has been studied and how violent extremist beliefs and actions evolve to inform preventive initiatives.

Terrorism research: the dynamic interplay between individual and group factors

A pioneering body of research has contended that group-level factors, not individual-level psychopathologies, lead people to become terrorists by committing to political violence for a group cause. In an early study, the forensic psychiatrist and former Central Intelligence Agency (CIA) officer Marc Sageman analyzed the biographies of 172 militants committed to violent jihad to show that the social bonds between families and friends, not psychiatric disorders, compelled people to join terrorist groups such as Al Qaeda.2 Jerrold Post, a psychiatrist also formerly employed at the CIA, analyzed the biographies of militants through psychological profiling and found that terrorist groups prevent mentally unstable individuals from joining, since they can sabotage social cohesion and commitment to the mission.3 Other studies have differentiated individual mechanisms of personal victimization and political grievances from group mechanisms such as group membership, identifying with the group’s task of waging violence, and subordinating individual identity to a militarized group identity.4-7 We know little about how individual- and group-level mechanisms interact and whether such mechanisms are the same or different across terrorist groups.

More recent studies suggest that individual psychological states can disclose who is susceptible to violent extremism. No specific mental illness has been directly linked to terrorist behaviors.8 Researchers have questioned this tenet by highlighting flaws in earlier studies: for example, terrorists are treated equally without considering role specialization (ie, bomb makers are assumed to act the same as financiers), mental disorders are assumed to be present or absent without testing for a range of possible disorders throughout a terrorist’s lifetime, and the lack of evidence on specific mental illnesses causing terrorism has led scholars to stop testing this relationship rather than to improve studies.

A landmark study comparing the prevalence of mental health diagnoses in 119 lone terrorists and 119 group terrorists that were verified through open source information such as legal documents (ie, competency evaluations) found that about 32% of lone terrorists had a mental illness compared with 3.4% of group terrorists.9 Diagnoses were recorded directly from documents or inferred by the researchers based on symptoms, so more detailed investigations are needed using structured instruments. Stratifications of the lone terrorist sample revealed higher rates of schizophrenia, delusional disorder, and autism spectrum disorder than in the general population. The authors suggested that schizophrenia may predispose these individuals to violence, delusional disorder may be manifested in a commitment to single-issue ideologies, and autism may explain social interaction deficits that impair the development of group relationships. Because a retrospective case study approach was used for data collection, questions about causality -such as whether mental illness predisposes individuals to violence -cannot be answered. Still, the studies offer elegant examples of empirical data collection and analysis given the logistical and ethical difficulties of interviewing terrorists.

We know little about how individual- and group-level mechanisms interact and whether such mechanisms are the same or different across terrorist groups.

Others have attempted to correlate rates of mental disorders with violent beliefs in specific communities that are assumed to be at risk for terrorism. To examine hypotheses that socioeconomic deprivation predisposes individuals toward violent extremism, researchers in the UK sampled 608 Muslim men and women aged 18 to 45 years.10 Study participants answered basic demographic questions and completed a scale on radicalization created with Muslim leaders and standardized assessment scales for anxiety and depression. Only 2.4% supported violent extremism, and sympathy was correlated with those aged below 20, full-time students, British natives, those speaking English at home, and high earners (> £75,000), not with anxiety and depressive symptoms. This study questions whether socioeconomic deprivation leads to support for terrorism, since the results showed that those who were most socially integrated and economically successful were more likely to support terrorism.

Other researchers sampled 3679 men aged 18 to 34 years throughout the UK. Study participants completed standardized assessment scales for anxiety, depression, personality, psychosis, and substance use disorders, along with questions on support for or against the British military intervention in Afghanistan as a proxy for pro-British or anti-British views.11 Respondents with anti-British views against the military intervention in Afghanistan were more likely to be religious, immigrants, socioeconomically deprived, and have antisocial personality disorder, although depressive disorder correlated negatively with support. The authors speculated that functional limitations of axis I disorders may become the focus of daily life in contrast to the heightened risk of violence in antisocial personality disorder.

A limitation of both studies is how best to assess extremism. Researchers examined proxies of extremism through self-report, which may be the only way to avoid self-incrimination of research subjects. Neither study clarified the relationship between socioeconomic deprivation and terrorism. Moreover, no link was found between anxiety and depressive disorders and terrorism.

Using a cross-sectional survey to sample general populations provides a novel way to determine the epidemiology of violent extremist beliefs, but supporting violent beliefs may not necessarily lead to committing violent acts. The notion of randomized trials is clearly nonsensical; however, longitudinal studies may also be questionable if there are observed attitudes of increasing concern that indicate potential criminal acts. Counter-terrorism legislation in the UK and elsewhere risks overriding ethical imperatives to protect the confidentiality of research subjects. Individuals in terrorism networks and organizations are unlikely to answer transparently or participate. Such challenges highlight the difficulties in investigating the relationship between mental illness and terrorism even in the best studies, yet this is exactly what mental health professionals are asked to undertake. There is no predictive tool that is likely to have validity for rare outcomes such as terrorist attacks. Instead, the framework of violence prevention may help contextualize terrorist offending.

3. Post J. The Mind of the Terrorist: The Psychology of Terrorism From the IRA to al-Qaeda. New York: St. Martin’s Griffin; 2008.