Shadow: A Blow So Appalling

Here’s why it is painful to see a man cry: he's not supposed to. Emotions are arresting when society tells us they should not be expressed. In the case of a grown man crying, there are some thousands of years of cultural training laying down the prohibitive regulations. 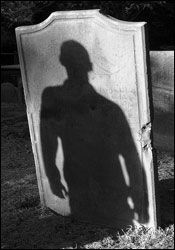 [Editor's Note: Click here for the recorded version of this blog.]

"I wanted to eat of the fruit of all the trees in the garden of the world... And so, indeed, I went out, and so I lived. My only mistake was that I confined myself so exclusively to the trees of what seemed to me the sun-lit side of the garden, and shunned the other side for its shadow and its gloom."

See my shadow changing,
Stretching up and over me.
Soften this old armor.
Hoping I can clear the way
By stepping through my shadow... 2

Here’s why it is painful to see a man cry: he's not supposed to. Emotions are arresting when society tells us they should not be expressed. In the case of a grown man crying, there are some thousands of years of cultural training laying down the prohibitive regulations. These prohibitions gave added emphasis to Gabe’s forceful, agonized sobbing. Crying may be easily faked. Yet the type of crying that results in copious mucous and tears streaming from one’s nostrils would be taxing, even for the elite malingerer.

Gabe was in prison for killing a prostitute. During a bout of hyper-sexuality, intoxication, and paranoia, he believed the prostitute intended to rob him. Sometimes, “life's little ironies are not always manifest,3 but here it was the case that the crime had taken place in a cemetery. The act marked the end of the woman’s life, and the end of Gabe’s life as he had known it to be.

Gabe was given a sentence of 20 to life in prison. He had completed only 3 of those years, and spent every one of them vigorously appealing his case. His most recent appeal had just been denied. For him, it was “a blow so appalling”4 that he now found himself on his knees in a cold suicide observation room, crying so hard he could barely speak. "I did. . . I did. . . I didn't mean to. . . do it..." was repeated several times in between convulsions of sobbing. Nursing had wisely put Gabe on suicide precautions, and then immediately called me to see him. I could do nothing other than bare witness to the moment.

Gabe’s life had been badly affected by 3 simultaneous afflictions: bipolar disorder, substance abuse, and antisocial proclivities.4-6 These afflictions had acted in concert to cast a restraining shadow across his consciousness.7 Paradoxically, it was now, in the severest convulsions of his anguish, that his being stepped up and through its own shadow: “I. . . Did. . .It.. .  I hit her head. . .  into the. . .  gravestone...”

His countenance eased. His body relaxed. His sobbing ceased. Gabe looked up at me from his place on the floor. His face was red and wet, but now appeared somehow younger. Softer. He appeared to want some type of answer from me. Not breaking gaze, not fleeing the moment, I offered, in a quiet tone: “I’m sorry.” We both sat there for a while longer, Gabe and I, in a type of silence that could not be well described by words.

In the months that followed, Gabe was seen regularly by mental health staff. There were serious concerns about him, but he never required suicide precautions again. In the years that followed, Gabe appeared lighter and more serene as he began to impress peers and staff with his woodwork. It was also the case that he had taken his lithium regularly, in addition to seeing a therapist. However, I could not forgo my impression, based on what I had witnessed, that it was Gabe’s own willingness to engage in tragic reasoning that had helped him turn the corner.

Tragic reasoning exposes the fraud of all ideologies and guarantees.8 It challenges all our ways of knowing and of being. It enables one to glimpse the cruelty and destruction that is in our nature. It is our point of unity: “The tragic is the situation that all subjects face insofar as they are subjects.”9

There lives in us a fear we will do anything to avoid. We are open to many experiences, but a hush falls across the psyche whenever the tragic rears its head. Perhaps our resistance to the tragic derives from the fear that it will reveal things about ourselves that we don’t want to know, and then refuse to release us from the duties that knowledge imposes. Not facing something is the very act that gives it the power to work behind our back. From within this shadow springs forth the reality that makes it impossible to avoid what we hoped we’d never have to confront. The specificity of what event will prove traumatic is, however, one of life’s great ironies.

What is the most appalling thing that assaults consciousness when the traumatic event surfaces? What is it -– that thing you most fear? In the destructive element we must immerse -– to recognize that accident and fate are desperate lies. If there is a tragic structure to our lives, we are its author. And because the event is our own doing, it contains the possibility of a self-knowledge we could not have gained otherwise. Everything about the event is uncanny, but uncanny here is revelatory of something utterly human.

Here is the appalling paradox: the thing about ourselves that we most strive to escape and deny is also that which we most need to bring about.  That paradox announces the untold depths one senses in the event, through the unique form of suffering that defines it. The underlying structure of our life has brought us to this very moment. What beckons is the chance to know one’s life from the inside by accepting one’s most intimate creation.

Will we cheapen the event? Would we regard it as inflicted by external causes? Or something to be endured passively until things are “restored” to the way they should be?  No. Proceed – ever. . . so. . . carefully. Like a blind man crossing a bridge. For the traumatic event offers the possibility of gaining a tragic knowledge of the ways we’ve been the author of our own undoing.

The clash and turmoil of emotions signal an assault by something that has broken loose within the psyche, and resists all efforts to contain the demands that emotion places upon the subject. And then. . . ego identity collapses. There is no longer any “I” separate from what one feels. To feel here is to be totally at risk in an anguish that eradicates every previous identity. We are that anguish.

There are times in life when the possibility of the deepest awareness is available, yet it is firmly grounded in the most intense inner suffering. Gabe appeared to have internalized this recognition, and had attained something deeper – a knowledge that his situation was irreversible, and that what he believed was the end of the line was actually the turning point.

Gabe’s wood sculptures and furniture became highly prized by corrections staff who purchased them at the inmate craft shop. Some 2 or so years after I sat with Gabe in his darkest hour, his therapist stopped by the inpatient unit. The therapist came bearing a gift from Gabe to the unit. Gabe had crafted a wooden plaque, nicely lacquered and artistically engraved, with the following inscription:

“For here there is no place that does not see you. You must change your life.” 10

Gabe might be considered fortunate by some. He had found the route that had taken him where others couldn’t. Following this path led him to his deepest insights, and then towards what gave his life meaning and joy. There are some limitations that can only be overcome internally.

“I saw then that the only thing for me was to accept everything. Since then-curious as it will no doubt sound-I have been happier. It was of course my soul in its ultimate essence that I had reached. In many ways I had been its enemy, but I found it waiting for me as a friend.”1

Acknowledgment : The author would like to thank Walter A. Davis, Professor Emeritus, Ohio State University for his insights and writings.