An Update on Pica: Prevalence, Contributing Causes, and Treatment

In this overview of pica, we review its causes and prevalence. In addition, we discuss some of the associated complications as well as current treatment strategies. 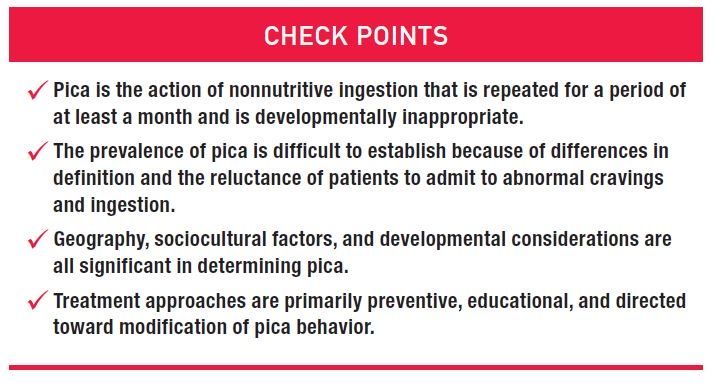 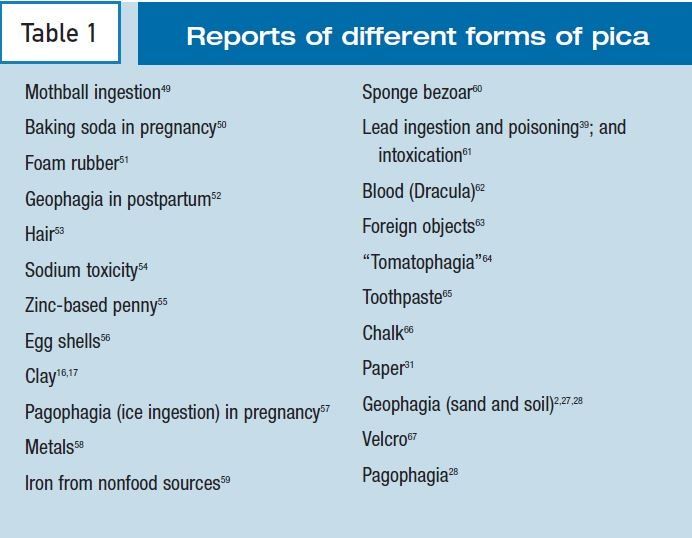 Pica is the pathological craving for and eating of a nonnutritive item (eg, clay, coal, paper) or food ingredients (flour, raw potatoes). It is a complex behavior that can present with any number of variations (Table 1), and multiple pica determinants range from demands of tradition and acquired tastes in the cultural context to presumptive neurobiological mechanisms (eg, iron deficiency, CNS neurotransmission, physiological conditioning).

The clinical consequences of pica may have broad epidemiological implications as in lead intoxication and geophagia in children, which lead to severe impairment of intellectual and physical development. In addition, acute and chronic medical complications may pose surgical emergencies (intestinal obstruction from bezoars) as well as more subtle encroaching symptoms such as parasitosis, intoxication, and nutritional deficits.

In the spectrum of eating disorders, pica may be viewed as a derailment of food selection and a driven, often chaotic, form of ingestive behavior. In this overview of pica, we review its causes and prevalence. In addition, we discuss some of the associated complications as well as current treatment strategies.

Contributing causes
According to DSM-IV, pica is the action of nonnutritive ingestion that is repeated for a period of at least a month and is developmentally inappropriate. Pica is most frequently seen in children and pregnant women. In certain ethnic populations, pica is culturally acceptable and is not considered pathological.

Poor parental supervision and oral overstimulation, maternal pica, and cultural acceptance of pica-especially common in families with African lineage and in southern US communities-may represent the extra pressures that allow pica to become manifest in a child prone to intense oral focus of drive satisfaction.1,2 Certain psychosocial stressors have been reported to be significantly associated with pica, including maternal deprivation, joint family, parental neglect, pregnancy, impoverished parent-child interaction, and disorganized family structure.3

Pica is often seen in mentally or developmentally disabled persons. Several recent studies suggest significant psychiatric comorbidity as a determinant of pica.4,5 Kraeplin was the first to document an extraordinary array of inedible materials consumed by psychotic patients and felt that this behavior might be a vegetative sign of psychosis, "a perversion of the appetite." Delusional schizophrenic patients may ingest glass, pins, or various other nonnutritive items, and driven nonnutritive eating has been seen in disorganized schizophrenic patients.6,7Prevalence
The prevalence of pica is difficult to establish because of differences in definition and the reluctance of patients to admit to abnormal cravings and ingestion. An incidence of pica greater than 50% is considered normal in children aged 18 to 36 months. Pica is thought to decrease with age; one study showed that about 10% of children older than 12 years engage in pica.8 Persistence of excessive hand-to-mouth movements observed in pica is abnormal in children older than 36 months.9

In the developmentally disabled, there are changes in incidence of pica with age, IQ, medication, and manifestations of behavior and appetite. An increased incidence of pica has been found to occur in patients with CNS congenital anomalies and associated medical problems, such as diabetes, deafness, and seizures.10 The incidence of pica has also been found to be increased in patients taking neuroleptics, which may be related to diminished postsynaptic dopamine receptor changes.11,12Ethnic differences and societal norms
Geography, sociocultural factors, and developmental considerations are all significant in determining pica (Table 2). Demographic information reveals that pica has been associated with diets that are low in iron, zinc, and calcium compared with a balanced controlled diet.13

In addition, ethnic differences occur in pica. For example, most cases of lead poisoning in New York were in Hispanic children, and the incidence increased in summer when vitamin D elevation by sunlight-induced synthesis may promote increased lead absorption.14,15 Pica is endemic among sedentary aborigines in Australia, where clay has been eaten as a fertility food.16,17 In Turkey, young women were encouraged to eat clay to enhance their fertility.18 Similar ideas shared in black culture encouraged pregnant females, both in Africa and later in the United States, to eat various types of clay to enhance childbearing.19 However, contemporary health education and availability of medical care have diminished these practices.

Mechanisms
The theory that the eating of non-nutritive substances is a need- determined behavior is supported by studies of food selection in young infants.20 Nutrient deficiencies and medical consequences such as iron deficiency, lead intoxication, growth and cognitive impairment, and in-testinal obstruction are frequently associated with idiosyncratic dietary habits.21,22

Recommendations for dietary alteration and the empirical use of iron preparations as treatment appeared before iron deficiency was proposed as a factor in the development of pica.23 Frustration of oral drive as a cause of fixation is not seen in the pica group.

Studies of food selection by Rolls24 suggest 2 adaptive mechanisms in the control of eating: (1) sensory-specific satiety, in which a person's perception of a specific food as pleasant decreases with increasing intake of that food, while other foods not eaten increase in pleasantness as a function of time since last eaten, and (2) neophobia, the avoidance of food not in a person's current food repertoire. Both mechanisms have an adaptive value. Sensory-specific satiety leads to increased variety, and neophobia ensures against eating possibly dangerous or nonnutritive foods. Perhaps both mechanisms are impaired or inoperative in persons with pica.

The role of iron deficiency
Pica has been associated with occult iron deficiency, which resulted in the sudden appearance of eating nonnutritive objects such as match heads25 and raw potatoes.26

The most compelling argument for the association of pica with iron deficiency is suggested by the studies on pagophagia (compulsion to eat ice). Reynolds and colleagues27 found pagophagia associated with low serum iron levels. Iron supplementation abolished pagophagia before correcting the anemia. In addition, Coltman28 reported cessation of pagophagia in 19 of 25 women with iron deficiency after iron supplementation for 5 days with intramuscular injection and 11 days with oral iron administration.

A critical review of clinical reports reveals that most authors verify the efficacy of iron supplementation in abolishing food and nonfood pica associated with iron deficiency states. This suggests a common central pathway such as mediation by decreased CNS dopamine neurotransmission, which has been reported to be a specific result of iron deficiency.29,30

On the other hand, some study findings suggest that pica may be a cause of iron deficiency in which the nonnutritive substance (eg, clay, starch) interferes with the dietary intake or absorption of iron.35-37 Further research on the neurobiological basis of pica is clearly desirable.

Pica may be a presenting symptom that can alert the clinician to anticipate a possible iron deficiency and, thus, the need to pursue a careful differential diagnosis.38 Pica frequently ceases after a few days of iron supplementation, which supports the role of iron loss in initiating and promoting pica.

Problems/complications
Serious medical consequences are associated with pica. Lead poisoning continues to be a hazard in young children. The persistence of hand-to-mouth movements in young children especially from the age of 18 to 36 months may result in the ingestion of lead-based paint.8 Whole blood lead levels greater than 25 mg/dL indicate that the child is in a contaminated environment.

Special types of pica and their medical complications include paper pica, which can lead to mercury poisoning. The ingestion of soil or clay has been associated with soil-borne parasitic infections, and ingestion of contaminated substances can present a significant health hazard.40 Behavioral problems in the developmentally disabled associated with pica include stereotypical behavior, hyperactivity, self-abuse, and food-related abnormal behaviors including eating off the floor and chewing objects.41,42Treatment
Reduction in exposure is the cornerstone of any treatment program. Treatment approaches are primarily preventive, educational, and directed toward modification of pica behavior (Table 3). In addition, iron supplementation has been seen to dramatically reverse pica in those patients whose clinical symptoms are more clearly coincident with iron deficiency from nutritional or covert medical causes.43 Nutrient treatment of pica has been reported as early as the 10th century, when Avicenna added iron to wine as a treatment for earth eating.1,23

Behavioral treatment approaches in pica involve careful observational analysis and the application of consistent contingent responses by a trained staff member. In a critical review of pica treatment, Albin44 pointed out conceptual differences in the definition of pica: nonfood items ingested in contrast to eating food on the floor. He noted that use of experimental tactics such as baiting the patient and the absence of data about generalization and maintenance of improvement made comparative evaluation of different treatment techniques difficult. Furthermore, primarily developmental factors, particularly the perpetuation of a finger-feeding stage that interferes with the use of utensils in mentally handicapped persons, may be related to the persistence of pica.

Often, the control of pica in mentally handicapped adults with complicated histories presents a clinical problem that must be approached through individualized design and the presence of aversive but not harmful consequences. Several behavioral techniques have been used to diminish pica behavior in developmentally disabled patients in a residential setting. One paradigm of treatment consists of verbal reprimand setting, response interruption, generalization, and reward that results in discrimination training.

In a psychoeducation treatment approach recommended by Lourie,45 mothers are instructed about the danger of pica that could result in lead poisoning in their children. Social workers can provide a social support system for mothers by meeting the mothers' dependency needs and helping them to be more available to their children. Strategies of prohibiting pica are taught to mothers so that they can spend more time with their children and interrupt pica behavior. Furthermore, the ability to identify families at high risk for pica could function as a primary prevention.9 To prevent lead poisoning in children, renovation of substandard housing and systematic screening of children in high-risk areas are imperative.15,46

Pharmacological treatment with SSRIs and atypical neuroleptics has also been reported. On the basis of the proposition that decreased dopamine transmission resulting from both iron deficiency and the administration of neuroleptics may be a critical determinant of pica, a pharmacological approach that increases dopaminergic transmission (bromocriptine, methylphenidate) may be worthy of investigation in a subgroup of patients in whom pica is both refractory and hazardous.47

Jakab48 reported that thioridazine reduced pica as well as a number of other problematic behaviors, such as aggression in hospitalized mentally handicapped patients. However, Danford and Huber10 noted an increased pica incidence (39%) in a subgroup of institutionalized mentally handicapped patients who received neuroleptic medication, in contrast to a 25% incidence of pica in a medication-free group.

Further research is needed to clarify the normal psychobiology and developmental progression of food selection, the intricate role of sociocultural influences, and the significance of appetite and ingestive disturbances in neuropsychiatric disorders. Special focus should be given to the high incidence of pica in the mentally handicapped and to the role of iron deficiency (the single most prevalent nutritional deficiency in world population studies) in causing and perpetuating eating disorders.

Education, prevention, and informed behavioral interventions are the mainstay of treatment. Advances in understanding the neurobiology of food selection may yield better nutritional and pharmacological approaches in the future.

Acknowledgements-The authors are grateful for the contributions to this article of Kim Jimenez, Jee Eun Kim, and Monica Salama.