Voices From the Past: Nelson Sizer’s Forty Years in Phrenology

In the interest of giving readers of Psychiatric Times a glimpse into this rich past, from time to time, H-Madness would like to share some examples of lesser known, yet enlightening, primary sources from the history of mental health. 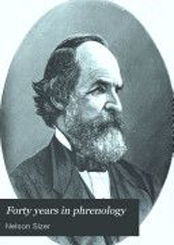 Primary sources-first-hand evidence of historical events, practices, or social conditions-serve as the empirical basis for all scholarly research in academic history. In the history of “madness” and mental health, patients and clients, healers, caretakers, researchers, and policymakers have left behind an enormous archive of source material from which we can piece together the history of psychiatry and its precursors.

In the interest of giving readers of Psychiatric Times a glimpse into this rich past, from time to time, H-Madness would like to share some examples of lesser known, yet enlightening, primary sources from the history of mental health.

This month, we offer excerpts from Nelson Sizer’s 1891 memoir, Forty Years in Phrenology.1 As many know, phrenology was a field of study, first developed by anatomist and physician Franz Joseph Gall (1758-1828), seeking to correlate the shape and size of crania with specific personality traits. Dismissed today as little more than quackery, phrenology was a serious endeavor in the 19th century, and its interest in the localization of brain functions helped give birth to modern neurology.

Even among historians, however, far fewer are aware of the fact that phrenologists did more than conduct research. As Nelson Sizer (1812-1897) shows, phrenologists in the United States worked as itinerant lecturers, psychological examiners, and personal advisors.2 Sizer himself spent the years 1839 to 1849 lecturing to audiences in schools, colleges, asylums, poorhouses, prisons, and churches. Along the way, he was often asked to serve as a counselor to parents, spouses, and businessmen. All told, Sizer claimed to have examined 200,000 people over the course of his 40-year career.

The following excerpts from his memoir show the ways in which “practical phrenologists” sometimes served as nascent psychotherapists. Something to consider: if we take Sizer at his word, how might we account for his apparent successes in these cases?

Timid Child Managed-A Great TestAnother instance occurred in this town, the recital of which may serve to aid some mother or teacher in the management of an unduly cautious child. At the close of a lecture on the nature and training of the sentiments of Approbativeness and Cautiousness, in which I had said that half the trouble which people had with timid children was largely owing to their improper management; adding that however much afraid of strangers any bright, intelligent child, two or three years old, might be, I would undertake to get it willing into my lap in twenty minutes. A bright and genial lady came up to the platform and said to me, “I have a boy two and a half years old, that I think is bright, but he has never been in the lap of any person not belonging to the family; even his grandpa, who has been in and out almost daily for the last year, can make no headway in overcoming the child’s aversion to strangers. Now, if you will come into my house and get that boy into your lap, willingly, in twenty minutes or twenty hours, I will believe in Phrenology.”

I found out where she lived and arranged to go there at one o’clock the next day and to enter the dining room in the extension of the house, without knocking and that neither she nor her husband should say any person was coming, or look at or say a word to “Charlie” when I came, nor while I stayed, and I was not to be treated as a stranger while there.

At the hour appointed I entered the house, the family was at the table. Charlie slipped out of his chair and left for the kitchen as quick as legs and “wings” could carry him. I instantly spoke in a tone of familiarity to the parents: “What made you eat up all the dinner so that I can have none? I will pick what I can get.” I took a seat at the table and began to eat-and kept talking in a way that a child, which I felt certain was listening, would understand-then laying one hand on the father’s head and the other on the mother’s, kept on telling them what they were fond of and what they could do, and stealthily turning toward the open door into the kitchen, saw about half of the little head and one bright eye peeping around the door jamb, of course wondering who and what that stranger could be who seemed to much at home with the house, the dinner, and the parents. I went on examining the heads and talking, keeping my back toward the little spectator, who forgot that I saw him leave the room, and, perhaps supposed I did not know he had existence. He edged his way into the room, and as he was against the wall quite a distance from the door, I kept turning my back toward and my face directly from him so as to compel him to get very near me before he could see the face of the drollest man that ever he saw in his home. Of course the plan was to ignore the boy, yet to talk so that he could comprehend it. All at once I walked away from the boy to opposite side of the room and looking up to a gaudy picture, representing Solomon’s temple, with the Sanhedrin in session wearing their red robes, I said,” What a splendid picture Charlie has here!” and then I kept on describing the figures of the council and calling them men and ladies and boys, and I dropped my eye and he stood by my side eagerly looking to learn, for the first time, the mysteries of the great picture which, the stranger had said, was Charlie’s. He had forgotten that I was a stranger in the sense of being dangerous. I had said nothing to him, had not looked at him, had not tried to have him come to me, but had let him alone, and talked steadily about what he could not understand, and he had got all the faculties of curiosity aroused, and his Cautiousness had gone to sleep.

I stooped and picked him up saying, “You can’t half see it down there, I will show you all about it.” And his finger on the picture with mine trying to tell me what he could of its new-found beauties. The fact that it was his, was a new thing to him, and I seemed to him to know more about his interests and possessions than his mother did.

I then set him down, for fear it would occur to him that I was a stranger, and walked right away from him and went where his father and mother sat, marked off a chart for the mother, and the boy was leaning against me, apparently very much at home, and trying to be interested in what I was doing. I opened my chart, which contained pictures, and told Charlie if he wanted to see the picture he might come now, and he climbed into my lap without assistance, while I kept the pictures of the book out of the reach of his eyes until he had got fairly into my lap. It was a struggle, and when he got fixed and gave a sigh of contentment, I turned toward the blazing and half tearful eyes of the mother interrogatively, and she burst out, “I give it up. Oh, how did you do it?”

I quietly replied, “I made no appeal to his Cautiousness, but did everything to allay that feeling, and to awaken curiosity and excite his judgment, imagination, and affection. Ignoring him was just what he needed, yet it was what others did not do, and you always tried to urge him to pay attention to the stranger, and make friends with him. That defeated its own purpose. I took a different course, and you see the result.”

The boy talked of me for months afterward, and wanted me to “come some more.” This method of curing timidity I always use when necessary, and it is wonderful how quickly other faculties can be awakened, and Cautiousness be allayed. A timid child is talked to and coaxed by every one that calls, and so grows worse. If left alone and unnoticed, it would soon get over its bashfulness.

Insanity Cured by Phrenology
While here, I received a call from a friend residing twelve miles distant, at Suffield, Conn., where I married my wife and resided during 1843. He informed me that Henry Bissell, of Suffield, had recently received a blow upon the head in the region of the temple, and had become insane in consequence. He appeared somewhat strangely for a day or two, and then took the train for New York, and before arriving there, attracted attention by immoderate laughter at everybody and everything in the car. A gentleman who knew him happened to be on the train, and took him back to Hartford, left him in the asylum, and sent for his father. Here he had been for several weeks under treatment without any apparent benefit. On hearing these facts I wrote at once to the father, and sent it by my informant, stating the impression that the injury was upon the seat of Mirthfulness, hence his tendency to laugh and see absurdity in everything, and suggested that if the physician would apply leeches and ice to that part of the head which was injured, the symptoms of insanity would cease. The aged father, who was interested in our lectures on Phrenology at Suffield in 1841, recognizing the reasonableness of the views that I had taken of the cause and proper treatment of the case, on receiving my letter at eight o’clock that night he instantly harnessed his team for a dreary drive of seventeen miles to Hartford, and, reaching the asylum at eleven o’clock, after Dr. Butler had retired, he insisted upon seeing him at once. With my letter open in his hand, the anxious father met the doctor, who read it deliberately and said: “It looks reasonable, and we will try the treatment in the morning.”

“No, doctor; we will try it to-night, if you please. I can not wait till morning.”

In half an hour the patient was under the treatment of leeches, in another half hour the injured part was under the influence of pounded ice, and he was fast asleep. The next morning he and his father took breakfast with the doctor; “he was clothed and in his right mind,” and in a short time went home with his father, apparently cured.

The injury was directly over the organ of Mirthfulness, and the inflammation caused by the blow, produced the deranged action of that faculty. Thirty-seven years have now elapsed since this injury was received and cured, and there has been no return of the symptoms of insanity. Had the inflammation been allowed to proceed, death, or mental derangement for life, might have been the consequence. The young man being my friend, I felt peculiar interest in the case.

Thus, Phrenology throws a flood of light on the subject of insanity for those who wish to learn.