Here's why Trieste is the place this psychiatrist would most want to be if he had a severe mental illness. 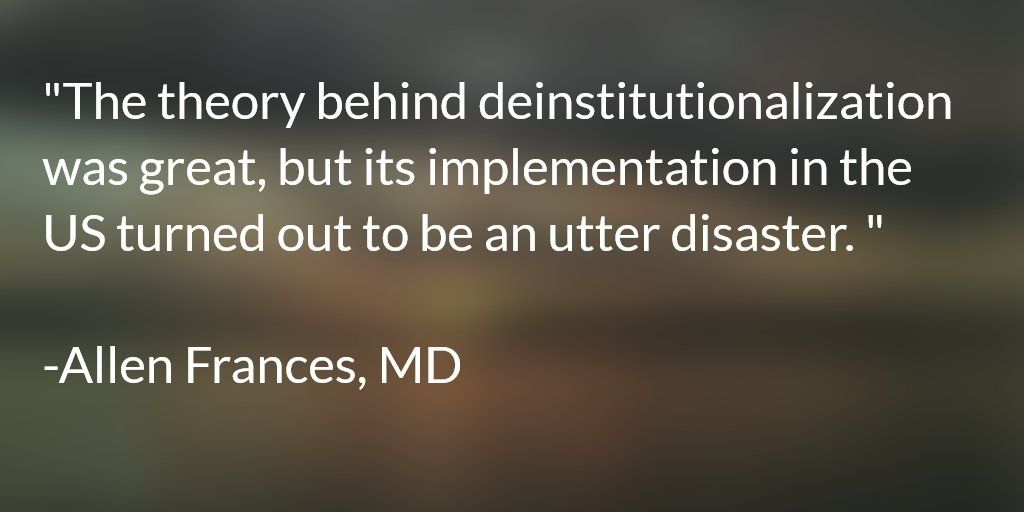 The first step in helping the mentally ill is not to hurt them.

Unfortunately, the US approach of exclusion and neglect often makes people get much sicker, rather than helping them get well.

The specific forms of mistreatment have changed dramatically during the past 50 years, but their cumulative dehumanizing impact has been a constant.

The severely ill used to be warehoused in state hospitals that were dirty, crowded, smelly, and dispiriting-giving the originally benign concept "asylum" its current terrible connotation.

I was there and saw, smelled, and felt the degradation of these disgraceful "snake pits." Living hopelessly and helplessly, with no freedom or rights or future, was enough to drive anyone crazy. No surprise that it caused the emergence of the worst symptoms in people who were already troubled by mental illness. Much of what seemed to be primary symptoms of sickness was rather a secondary response to the sickening context in which we placed our inmate "patients."

So I was hopeful and excited when the mental health reform movement gained strength. It sought to close the dreadful hospitals and substitute dignified community care and housing. This cleansing wave would combine the advantages of new techniques in community psychiatry with the seeming magic of the new wonder drugs that were just then being introduced into everyday practice.

The theory behind deinstitutionalization was great, but its implementation in the US turned out to be an utter disaster. State governments, previously responsible for covering the costs of mental health care, exploited deinstitutionalization to offload responsibility and cost. The money saved from closing hospitals was supposed to be spent on opening community-based treatment services and for providing decent community housing. Instead it was diverted  to tax relief or to support other programs.

Deinstitionalization turned into transinstitutionalization-at first to nursing homes for the older patients, then to prisons for the younger ones. Hundreds of thousands fell through the cracks and became chronically homeless.

The medications that first seemed so wondrous turned out to be less effective than hoped and routinely caused harmful sign effects. They were usually necessary, but never sufficient-and certainly were no miracle.

Unprepared patients were quickly and ruthlessly dumped from dismal hospitals to often worse conditions in prison or on the street. The end result? The US is now probably the worst place in the developed world to have a severe mental illness.

I just attended an inspiring conference organized by the World Health Organization to help promulgate what is the contrasting best of psychiatric care-how to do things right. It was appropriately held in Trieste, the place I would most want to be if I had a severe mental illness.

The conference's 400 participants came from more than a dozen different countries representing a wide variety of cultures, needs, and resources. They reported how they have been able to apply the wonderful model created first in Trieste to their very different contexts.

We in the US are stuck in a psychiatric dark age and need to catch up to the rest of the world.

I have asked Dr Mario Colucci, a psychiatrist from Trieste, to show us the way. He will briefly review the history of the Trieste model, its rationale, and how it works in practice.

The experience of deinstitutionalization in Italy was led by Franco Basaglia, a charismatic psychiatrist and community organizer who, through force of logic and moral suasion, was able also to acquire considerable political influence. In 1978, he persuaded Italy's parliament to pass an inclusive law requiring the closure of all the specialized mental hospitals in the country.

Basaglia promoted as replacement a model that respected the dignity and freedom of the mentally ill; their right to live as citizens in the community; and the great thrapeutic value of engaging them in its daily activities.

The previously coercive, paternalistic, and exclusionary medical model was replaced by an emphasis on interpersonal relations, improved living conditions, and opportunities to work and play. Coercion, seclusion, closed doors are all eliminated.

The focus is on the person; the illness is put “in brackets." Long stays in hospital never treat mental illness; they often make it chronic and promote demoralization, along with new and worse symptoms.

For deinstitutionalization to work, there must be not just the closing of hospitals, but also the opening of society. Patients had not only to be discharged from closed units, but also embraced by open communities. This doesn’t happen without a lot of organization, preparation, hard work, persuasion, and occasional turmoil.

In Trieste, 1200 mental hospital beds were closed. Housing, 24 hour community centers, home care, social clubs, work coops, and recreational opportunities all had to be developed from scratch. The fear and opposition in the community dissolved as the model proved its worth, safety, practicality, and reduced cost.

For over 35 years the town of Trieste (240,000 inhabitants) has not had any kind of specialized mental hospital. The asylum was replaced by 40 different structures with different roles and tasks.

The Department of Mental Health now has 4 Community Mental Health Centers (open door and no restraint), situated in the 4 Districts into which the Trieste Health Agency is divided. Each provides services to a population of about 60,000 inhabitants; is active 24 hours a day, 7 days a week; and needs only 6/8 beds for temporary patient sleepovers. The Department also has 1 general hospital psychiatric unit with 6 beds; a network of supported housing facilities; and several social and work enterprises.

The Community Centers are the access point and also the planning, caring, and social focus of the mental health system. They provide therapeutic, social, and rehabilitative continuity.

Families and friends are welcomed into an environment that is creatively designed and attractively furnished. This pleasant club-like atmosphere is normalizing-you usually can't tell who is staff, who is patient, who is family or visitor. Recognizing that recreation and pleasure are an important part of life, the centers include time and facilities for parties, trips, exercise, art and theater workshops.

Group activities involving staff, volunteers, users, and families promote a social network of friends, colleagues, neighbors, and others who play an important role in the therapeutic processof social reintegration.

Home visits help us to learn about the living conditions of the person; mediate  conflicts with family or neighborhood; administer medication; and accompany people to visits at the hospital, government agencies, or the workplace.

The few beds are used for varying periods for crisis situations; to protect against specific risk, or to give a respite to both patient and family.

We continuously listen to and study the problems and living conditions of the person, to look for solutions and better ways to build a new balance. We also work with the family, to verify and discuss dynamics and conflicts, to stimulate possible changes, and to build the alliance with the therapeutic program.

Support is also provided for the most disadvantaged and their families, through economic benefits, social integration, job training, and by linking the patient to organizations and institutions that can help meet their needs. Different degrees of assistance and protection are tailored and adjusted to the person's and family's circumstances.

Community services also operate wherever else the user is to be found-at  home, in hospital, nursing homes, prisons, and forensic facilities.

We respond to calls for urgent help and are open 24 hours every day.

The Trieste approach is based on 5 principles: individualized care plans through active negotiation; ensuring comprehensive responsibility of Community Mental Health Centers in all phases of treatment; working with and on the environment and the social fabric; supporting individual freedom and strengths; and fostering service accountability toward the community.

In 1987, the World Health Organization designated Trieste as its pilot collaborating center for deinstitutionalization and community mental health care. It has continued in this capacity ever since and provides training and advice to centers around the world.

We have been fortunate in having just 4 highly effective and dedicated directors during our 35 years of operation. This provided stability and continued the clarity of the Basaglia vision. We have embraced the city of Trieste and Trieste has embraced us. The political leadership of the town has been a source of constant support and inspiration.

We love working in our democratic and free environment-one that brings out the best in our patients, in our staff, and in our community."

Thanks, so much Mario. I feel shame and despair that Trieste offers so much,  while we in the US offer so little.

Our National Institute of Mental Health spends vast fortunes to discover the biological basis of mental illness. This is a worthy endeavor, but one that unfortunately will take many decades to bear any meaningful fruit in the daily lives of people now suffering from severe disturbances. We should be doing the hard and unglamorous work of meeting the current needs of our patients, rather than banking on the long shot bet there will be easy cures in future  based on research.

Can we do the Trieste model in the US?

Yes, we already have proof of concept.  Similar programs have worked well in the US at various times and places.

Unfortunately, though, the model has  proven to be a fragile plant attempting to take root in our less welcoming and resource-depleted environment. Good community programs in the US tend to last only as long as the founder is active and the community is committed to funding. Usually this has not been very long.

And we can't jump straight from our current neglect and disorganization to Trieste's well organized system of social psychiatry. After a century of social exclusion, our patients present in a much more disturbed state than do patients in Trieste. Eliminating all involuntary treatment and precipitously reducing medication are possible only when a strong system of social supports is already in place. If we attempt to apply the Trieste model prematurely and piecemeal, the harmful unintended consequence would be even more people inappropriately placed in prison or condemned to homelessness.

To give the Trieste system a fair chance to succeed in the US, we would first need
funding, training, time, dedication and compassion. And it wouldn't work everywhere-even in Italy some regions are enthusiastic about social psychiatry, while others are much more conservative.

But everywhere in Italy, care is much better than in the US because of deep cultural traditions of family, community, political, and societal obligation to care for the most vulnerable. Traditions once important also in the US, but now sadly lacking in much of our country. For the Trieste model to work in the US, we would have to change US attitudes about mental illness and also about what it means to be a community. These are both heroic tasks, not possible perhaps in most places, but certainly possible in some.

I am hopeful that we have hit a bottom and that things will improve. It doesn't seem possible that we will continue to so badly shortchange the severely ill and condemn so many of them to a life even more dangerous and degraded than the one once lived in the old snake pits. We can and we will do better.