An Introduction to Treating the Brain: An Odyssey

The history of modern psychopharmacology: a history of epic proportions.

Treating the Brain: An Odyssey 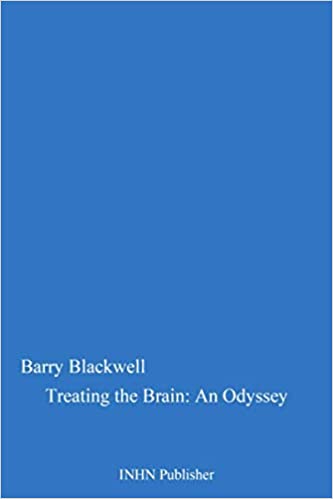 Treating the Brain: An Odyssey

by Barry Blackwell, MD; International Network for the History of Neuropsychopharmacology 2020

Editorial note: In this article, Dr Blackwell offers a brief introduction to his latest book, and points to lessons learned and exciting episodes from the history of psychopharmacology.
-Awais Aftab, MD

Barry Blackwell, MD, is a psychiatrist and psychopharmacologist. He is the retired professor and chair of psychiatry at the Milwaukee Campus of the University of Wisconsin School of Medicine (1980-1992). He trained in medicine at Cambridge University and Guy’s Hospital, and in psychiatry at the Maudsley Hospital in London. He migrated to the US in 1968, and served in a variety of academic, clinical, and research positions. He has received many awards and honors, including National Institute of Mental Health (NIMH) Administrator’s Meritorious Achievement Award for Homeless Mentally Ill (1991), American Psychiatric Association Warren Williams Award for Community Services (1992), and National Alliance on Mental Illness Exemplary Psychiatrist (1993). Professional volumes authored by him include Discoveries in Biological Psychiatry (with Ayd F, 1970, Lippincott), Psychiatric Case Formulations (with Sperry, Faulkner, and Gudeman, 1992, American Psychiatric Press), and Treatment Compliance and the Therapeutic Alliance (1997, Harwood Academic Publishers). He served as deputy editor to Thomas Ban on The Oral History of Psychopharmacology (Vols 4,7, and 9). His most recent book is Treating the Brain: An Odyssey (2020, INHN Publisher).

Treating the Brain: An Odyssey tells the history of modern psychopharmacology, the lives of those who led and lived it, and some of the major controversies created between 1941 and 2020. A major focus of the book is to compare and contrast the pioneer period (1949-1980) with the modern period (1981-2020). The book offers detailed biographies of leading pioneers and scientists beginning with Thudichum and including Elkes, Delgado, Cade, Delay, Berger, Lehmann, Kuhn, and Smythies. A chapter is also devoted to outstanding women pioneers whose contributions have rarely been recognized in earlier histories.

An Integrative Paradigm for Mental Health Care: Ideas and Methods Shaping the Future

This book is published by the International Network for the History of Neuropsychopharmacology (INHN). INHN, as an organization, is committed to documenting, preserving, and disseminating all contributions relevant to the history of neuropsychopharmacology. Its operating committee consists of Thomas A. Ban, MD; Barry Blackwell, MA, MPhil, MB, MChir, MD, FRCPsych; Samuel Gershon, MD; Peter R. Martin, MD, MSc; and Gregers Wegener, MD, PhD, DSc. In 2007, after I gave my own interview for The Oral History of Psychopharmacology project, Ban recruited me as a deputy editor until its conclusion in 2011 for the 50th anniversary of the American College of Neuropsychopharmacology. He then began to plan the website for INHN (INHN.org). The editorial work is unfunded, although we receive in-person editorial support for book publications (of which my book is the second in a series) from the Morra Foundation in Cordoba, Argentina.

Psychopharmacology in the pioneer period was exciting, rewarding, and intensely satisfying. Aided by serendipity and without large, controlled studies, these pioneers found effective treatments for every category of mental disorder, emptying the asylums and initiating community care. The beginnings of this era are told in Chapter 1 (Johann Thudichum, MD) and Chapter 3 (Joel Elkes, MD), when 2 individuals from Germany and Lithuania who settled in the UK began their professional lives working to reveal the chemistry of the brain and how to access its neural circuits.

The passage from asylum care to the community, from psychoanalysis to medications is told by Enoch Calloway, MD (Chapters 2 and 16). How psychopharmacology usurped the analytic stranglehold on academic psychiatry is told through the story of Martin Kassel, MD, recruited by the NIMH to convert from internal medicine to psychiatry in mid-life. Both Elkes and Kassell (Chapter 15) were interviewed at age 100.

An excellent example of how both chance (serendipity) and character traits (forward thinking, curiosity, persistence, and creativity) shaped a highly successful career is seen through the eyes of Karl Rickels, MD, PhD, (Chapter 14), which is based on his life as German prisoner of war in 1943 to a distinguished professor in his 80s.

The life of Frank Berger, MD, (Chapter 10) both is exciting and illustrates lessons learned from this history. I share some details here from his life as an example of what the history of psychopharmacology has to offer us. Berger and his pregnant wife escaped from Prague 2 days after Hitler invaded his homeland. Denied passage to America at the last minute, Berger crossed the Channel to England, where he had no money, had no job, and could not speak the language. Eventually, he found work in a pharmaceutical company and came to America, where he found work as head of research at a small pharmaceutical company whose only product was Carter’s Little Liver Pills. Berger began work with animals, then humans on the first effective drug for anxiety: meprobamate, or “Miltown.” In 1 short year, Wallace Labs’ annual sales went from $80,000 to $2 million. Eventually the benzodiazepines would take over, but Berger’s reputation was made.

From the start, Berger recognized that while drugs can stifle anxious thoughts, feelings, and behaviors, these reemerge when the drug effects wear off. New approaches to anxiety-provoking stimuli only arise when learning occurs, based on life experiences, or are sometimes facilitated by talk therapy. Throughout a productive life that ended at age 94, Berger kept careful notes of his philosophical views on life that he planned to publish: “In my immodesty, I want to offer a recipe for happiness and success.” These were to be published dedicated to Maimonides, Judaism’s medieval physician-philosopher, with the book’s title as A Guide for the Perplexed. After Berger’s death, his widow took care of bringing it to press. It contains not only Berger’s insights, but quotations from philosophers, authors, politicians, and others arranged alphabetically in 60 categories. No mention is made of drugs or his discovery, except on the back cover, there appears the following: “There are misunderstandings about tranquilizers, about what they can do, who should use them, when, and how to use them. They may make you feel normal again, able to cope again, but are no substitute for philosophy.”

The last few chapters of the book consist of reflections on how psychiatry has developed over the last few decades and the current state of affairs—what Edward Shorter, PhD, describes in the book’s foreword as “the disaster that psychiatry’s encounter with psychopharmacology has become.” We are currently in a position where research based on DSM categories has failed to uncover etiological mechanisms, the ethics of drug development has become corrupted by industry abetted by complicit physicians, federal support for psychiatric services has declined, and morale has dwindled, as psychiatry waits for neuroscientific progress to revive clinical progress. Readers are encouraged to read this final section, but not to be discouraged by it.