The Cardiovascular Consequences of Drug Use

Some commonly used drugs and narcotics have serious cardiovascular effects. 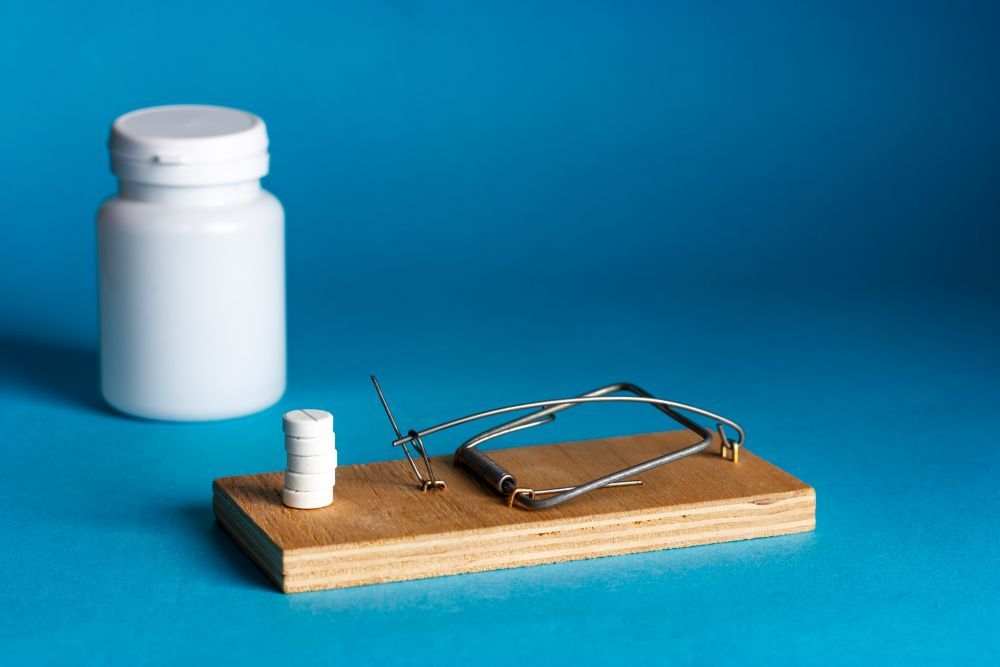 More granular examinations reveal that illicit drug activity was primarily driven by marijuana/cannabis use, with 43.5 million past-year users. The second most commonly used illicit drug was prescription pain relievers, often opioid-based, misused by 3.6 million individuals aged 12 years or older.1 Given widespread substance abuse, it is critical to be aware of both the cardiovascular risks that these substances pose and the challenges associated with managing cardiovascular complications.

IN THIS SPECIAL REPORT

World-wide, alcohol abuse is estimated to be 1 of the 4 most common, non-communicable diseases that is both preventable and modifiable.2 The widespread use of alcohol can be attributed to the globalization of its production and marketing, and its relative ease of access. Often, moderate alcohol consumption has been thought to lower risk of cardiovascular and all-cause mortality. The culmination of data suggests a half- to 1-standard drink (7 to14 grams pure ethanol) per day for women and 1 to 2 standard drinks for men (14 to 28 grams pure ethanol) can lead to roughly an 17-18% reduction in all-cause mortality.3 However, there are reasons to be skeptical of this data. Lower-risk drinkers may appear healthier than abstainers due to the fact that the abstainers are not drinking due to pre-existing medical conditions or disease(s) caused by prior excessive alcohol use. When adjusting for these factors, it appears the benefit may dissipate.4 The association between excessive drinking and various forms of cardiovascular disease is well defined, and an increased death rate has been observed with consumption of 2.5 drink/day in women or 4 drink/day in men.3

The cardiovascular complications of alcohol can be divided into acute and chronic effects (Figure 1). It is also important to be aware many individuals who use alcohol abuse other substances and have additional risk factors that contribute to cardiovascular disease (ie, tobacco or cocaine).5 The potential mechanism leading to hypertension include endothelial dysfunction, vasoconstriction, sympathetic activation, and activation of the renin-angiotensin-aldosterone system (RAAS). Furthermore, alcohol use may contribute to secondary causes of hypertension, including sleep apnea and renal atrophy.5 A multi-national meta-analysis has demonstrated a linear relationship between alcohol consumption and hypertension, with a risk factor that is 1.7 times higher with use of 50 grams/daily, and 2.5 times higher at 100 grams/daily.6 Management options include abstinence and use of RAAS inhibitors.1 In fact, blood pressure reductions of 7.2mmHg has been seen with up to 1 month of abstinence.1 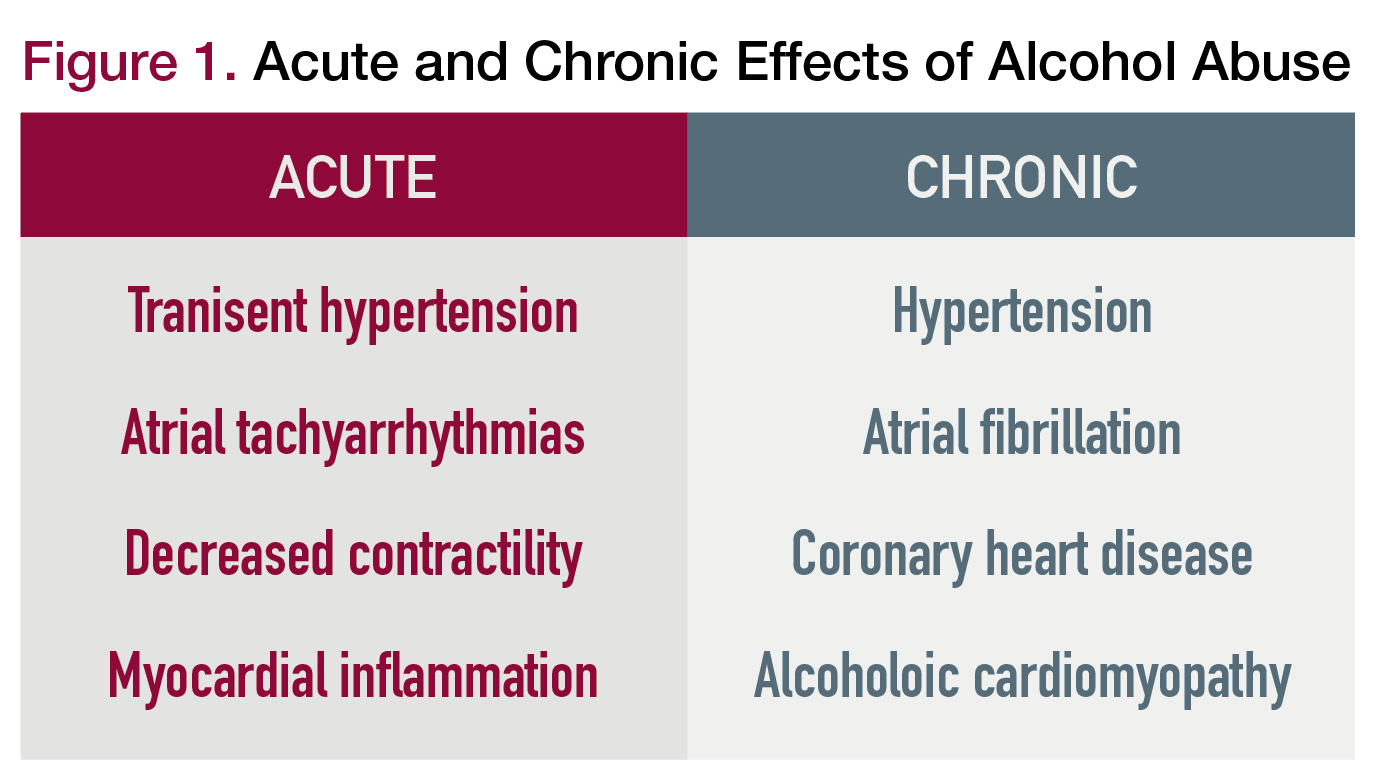 Binge drinking and/or heavy alcohol consumption has been linked to the development of a variety of acute cardiac arrhythmias, with atrial fibrillation (AF) being the most common.1,5 Mechanistically, alcohol may lead to direct autonomic effects as well as atrial remodeling overtime. In addition, as with hypertension, alcohol impacts other secondary risk factors for AF like obesity, electrolyte abnormalities, or sleep apnea.1,5 The key means of AF prevention is reducing or limiting alcohol consumption, but if AF occurs, the risk/benefit of anticoagulation should be considered. The adoption of a rate or rhythm control strategy should be considered too.

Regular, heavy alcohol use can lead to alcoholic cardiomyopathy (ACM), which accounts for 33% of all cases of non-ischemic cardiomyopathy, characterized by dilation and impaired contraction of 1 or both ventricles.1 The free radical generation accompanying alcohol use, along with activation of the RAAS and sympathetic nervous system, is thought to lead to ACM. After abstinence, patients who develop ACM and subsequent heart failure with reduced ejection fraction should be managed with guideline director medical therapy, including RAAS inhibitors, beta-blockers, and diuretics.1

Cannabis, or marijuana, is increasingly used both recreationally and therapeutically worldwide.7,8 Particularly, the major chemical compounds excreting these effects are D-9-tetrahydrocannabinol (THC) and cannabidiol (CBD). While the benefits of cannabis are numerous, few of them are cardiovascular-related, and cannabis’ true risk to the cardiovascular system is poorly understood. In terms of adverse cardiovascular consequences, THC appears to impart most of the negative impact, but larger and longer-term outcomes are lacking.7,8 Mechanistically, THC stimulates the sympathetic nervous system while concurrently inhibiting the parasympathetic nervous system, leading to increased heart rate and elevated blood pressure, which effects myocardial oxygen demand (Table 1). Furthermore, it appears THC can lead to platelet activation and overtime associated endothelial dysfunction and oxidative stress. In addition, impurities in cannabis products can induce or exacerbate these effects.7 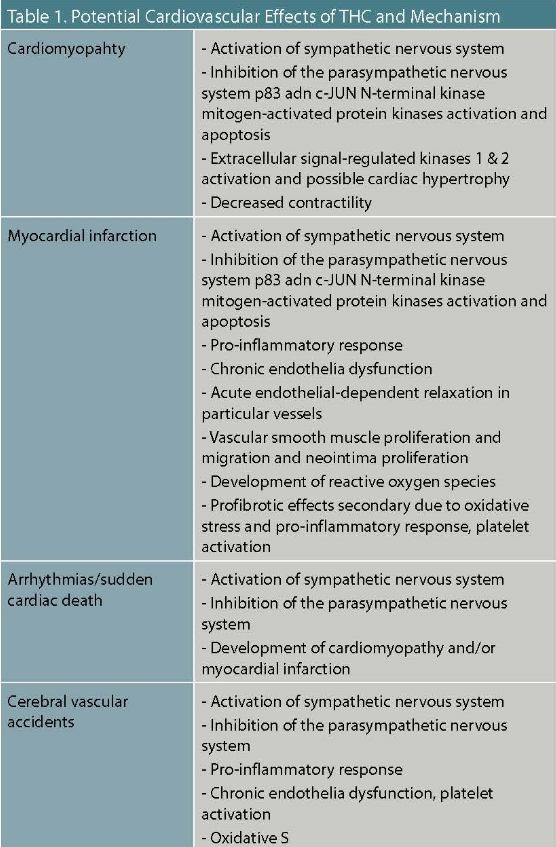 Given this cardiovascular milieu, it is prudent to understand the short- and long-term outcomes; however, this collection of existing outcomes data is limited to due to its short-term nature. It is observational and retrospective, and it suffers from recall bias, lack of exposure determination, and the given age of the data may not reflect current consumption concentrations.7,8 In a combined analysis of 33 studies investigating cardiovascular risk and marijuana use, 28 studies reported an increased risk of acute coronary syndrome (ACS), with risk being highest recent use.9 Similarly, a study found a 3.3-fold increase in annual risk for cerebrovascular accidents (eg, strokes) in patients who use cannabis weekly or more often.10

Management for the prevention and treatment of cannabis-induced cardiovascular disease needs to be better elucidated, but consists of limiting use, synthetic alternatives, education regarding the potential cardiovascular risk, enforcing primary cardiovascular prevention practices, and standard guideline-recommend therapy should a cardiac event occur.7,8 Finally, patients and clinicians should be aware of the various cytochrome enzymatic drug interactions associated with cannabis use.8 Specifically, cannabiodiol and THC inhibits CYP 3A4 and 2D6 to some degree, which could impact the effects of antidepressants, beta-blockers, warfarin, statins, and various other agents.

Worldwide, cocaine is among the most commonly used illicit recreational drugs.11 Furthermore, approximately 40% of all emergency department visits related to substance abuse can be attributed to cocaine.12 Many of the leading reasons for these visits include cardiovascular complications or complaints of chest pain.11 A multitude of studies have reported deleterious effects on the cardiovascular system, including ACS, cardiotoxicity, arrhythmias, and sudden cardiac death. Cocaine induces a variety of pathophysiological changes that lead to an array of downstream cardiovascular sequalae (Table 2).11,12 As one would suspect, the major mechanisms are related to its sympathetic, surge-inducing myocardial supply/demand and eventual hypertrophy. Knowledge of these mechanisms can clue one into potential management strategies. 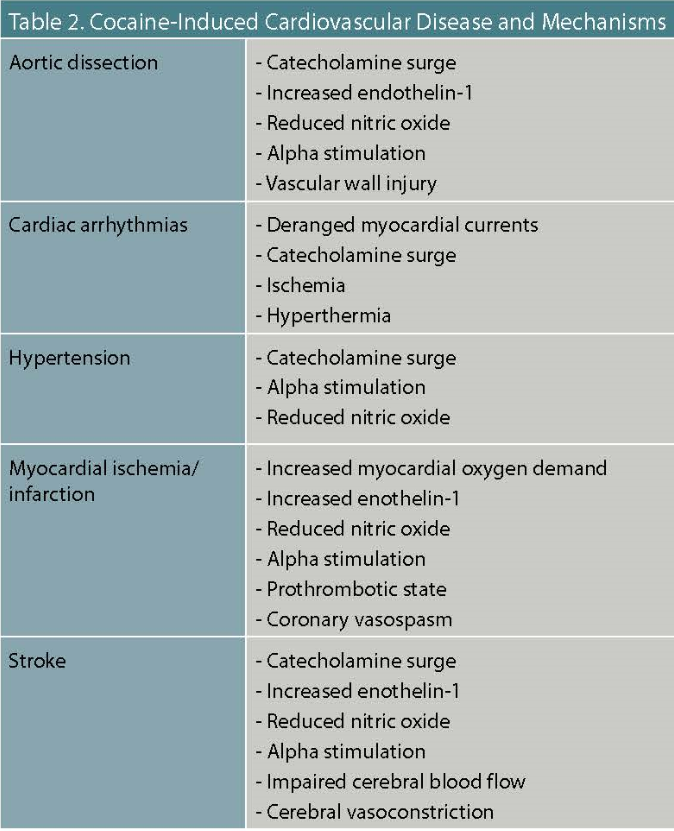 Management of a patient who presents with suspected cocaine-induced cardiovascular disease should include a through history and physical, vitals including temperature and pH, performance of electrocardiogram and monitoring of heart rhythm, and any other cardiac specific testing. Management can follow the general recommendations in Figure 2. The recommendation is for non-selective beta-blocker (ie, carvedilol) therapy versus avoidance of beta-blocker or use of a beta1-selective agent (ie, metoprolol). A case report in 1985 suggested that selective B1-receptor blockade with intravenous propranolol lead to paradoxical hypertension due to unopposed a-receptor stimulation, which required nitroprusside treatment.13 This report led many to avoid or caution against the use of beta-blockers as a class for cocaine-induced cardiovascular disease. However, subsequent review of retrospective and prospective data (including small cohorts and large observational data sets) has indicated either no harm or potential benefits from beta-blocker therapy.11 However, this data is limited by its heterogeneous nature. Ideally, there would be more prospective evidence confirming these results, but until this the American College of Cardiology (ACC)/American Heart Association (AHA) guidelines allow the use of a non-selective beta-blocker in patients who are tachycardiac and/or hypertensive after cocaine use (Class I, Level of Evidence C).14

Cardiovascular Impact and Management of Other Substances 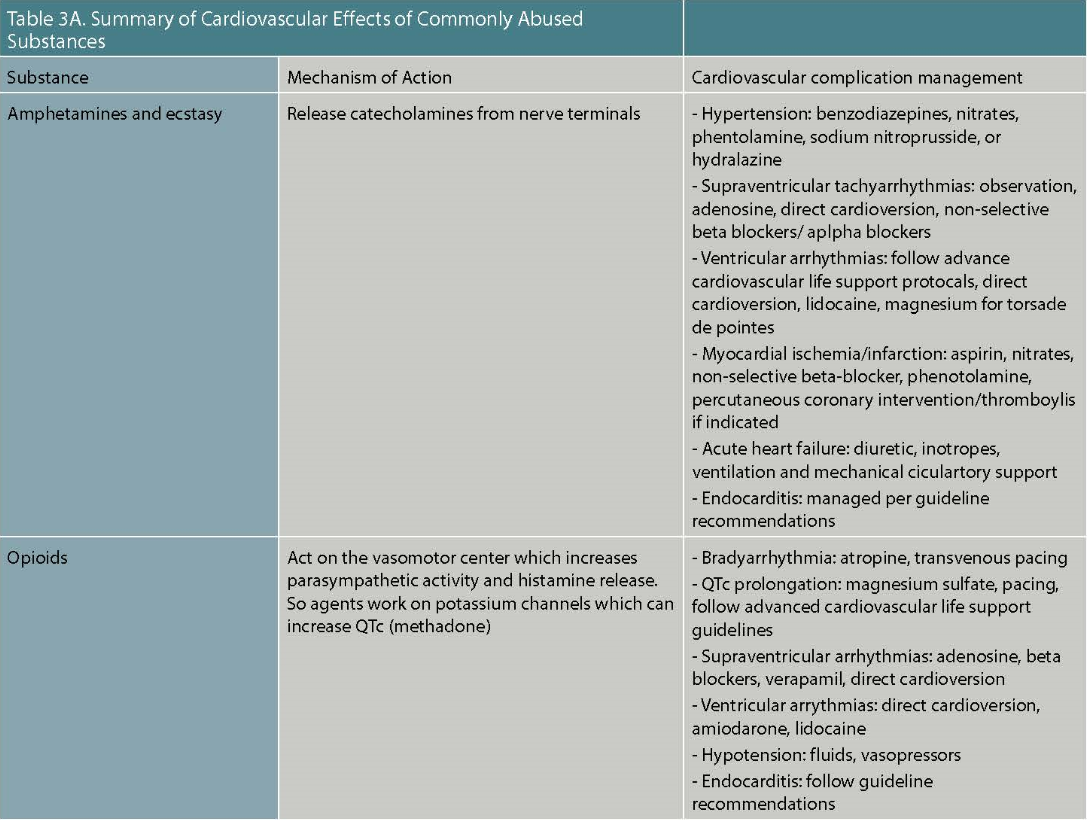 The agents above were discussed in detail due to their frequent use, as outlined in the most recent National Survey on Drug Use and Health. However, there are a variety of other substances with cardiovascular consequences.15,16 These agents are highlighted in Table 3A and Table 3B.

Substance abuse can have a diverse array of cardiovascular consequences. There is still more to be understood about the true risks and optimal management. However, it is critical for clinicians to be aware of these risks and keep appraised of the most recent evidence. Clinicians should obtain a detailed history related to recreational drug use and educate patients who have substance abuse disorders about the cardiovascular impact. Finally, cardiovascular prevention and management should be considered within a holistic approach to each patient.

Dr Beavers is a cardiovascular clinical pharmacist and adjunct assistant professor at the University of Kentucky College of Pharmacy. He is also director of Cardiovascular Services at Baptist Health Paducah.

1. Center for Behavioral Health Statistics and Quality. Results from the 2018 National Survey on Drug Use and Health. September 7, 2018. Accessed January 7, 2021. https://www.samhsa.gov/data/sites/default/files/cbhsq-reports/NSDUHDetailedTabs2017/NSDUHDetailedTabs2017.pdf#page=1282&zoom=100,0,240