Considering Edison’s Predictions: Prevention as the Next Frontier for Psychiatry

The authors emphasize the importance of risk and protective factors and risk prediction models; analyze the growing evidence base for preventive interventions; and describe the concept of mental health promotion. 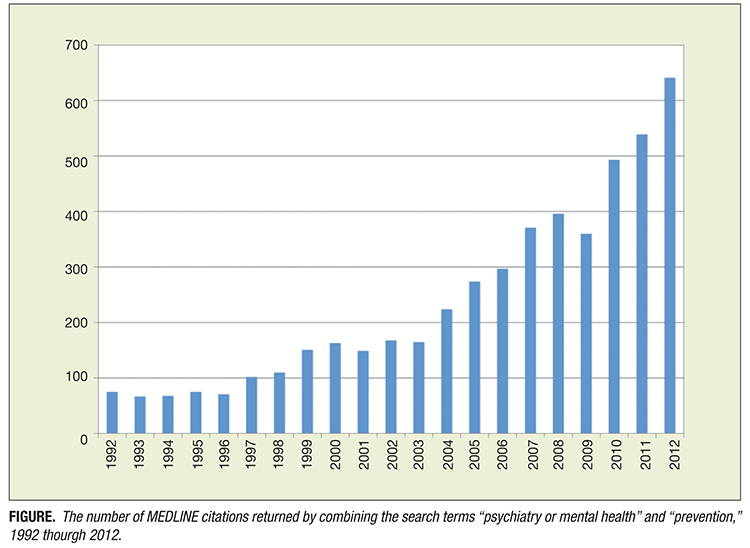 The doctor of the future will give no medication, but will interest his patients in the care of the human frame, in diet, and in the cause and prevention of disease.

In considering Edison’s adage, we note an increasing interest in prevention in the field of psychiatry. Medical specialists in, for example, cardiology, oncology, and neurology, detect and evaluate conditions such as hypertension, ductal carcinoma in situ, transient ischemic attacks, and elevated cholesterol, not to treat a symptomatic or disabling medical condition, but to prevent disabling conditions by addressing the earliest manifestations. In psychiatry, we monitor and treat symptoms once a disorder manifests-but is that enough? Is there a way to intervene earlier-to halt or prevent illness progression?

In this article, we discuss the need for further advancement of prevention science and practice. We also present 2 classifications of preventive interventions; emphasize the importance of risk factors, protective factors, and risk prediction models; analyze the growing evidence base for preventive interventions across the life span; and describe the concept of mental health promotion. Finally, we present some of the tasks and challenges ahead as psychiatry re-envisions its scope, with prevention taking a more prominent role.

Antonio is 17 years old, with a long history of ADHD. Recently, his functioning declined and he began displaying odd behaviors. Specifically, over the past 6 months, Antonio has gradually isolated himself from friends, and he stopped going to school one month ago. His father reports that Antonio is “doing weird things with his hands,” which seem to be occasional repetitive stereotypies and finger snapping.

Although always interested in indigenous cultures, Antonio has recently become obsessed with reading about the Mayan culture online. Antonio’s mother died at age 24, soon after a 3-month hospitalization for newly diagnosed disorganized type schizophrenia when Antonio was 7 years old. Her death was either an accident or suicide.

Although Antonio has a history of occasional marijuana use with his friends, the evaluating psychiatrist is mainly concerned that Antonio might be in a prodromal state, at imminent risk for schizophrenia. As the psychiatrist gathers additional history and plans for further evaluation and close monitoring, she realizes that the optimal treatment regimen remains unknown or undeveloped. What she really needs are tools for prediction and prevention, at least if her worry about an emerging psychotic disorder is indeed the most reasonable explanation for Antonio’s recent behavioral changes.

Even so, increased interest and advances in prevention science are occurring. A MEDLINE search for “psychiatry or mental health” and “prevention” resulted in an average of only 71 citations per year in 1992 through 1996. By 2012, there was a 9-fold increase in such articles (Figure). Yet, there are many uncharted frontiers with regard to preventing the vast array of psychiatric disorders.

The basic classifications of prevention

As defined by the Commission on Chronic Illness in the late 1950s, primary prevention refers to those interventions that avert the incidence, or initial occurrence, of a disease; secondary prevention refers to interventions that detect disease in the early stages, and thus reduce prevalence.1 Tertiary prevention, which is typically conceived of as treatment with the goal to reduce disability, aims to reverse or slow the damage or progression of disease and is often the main activity of most psychiatrists in day-to-day practice.2

The role of risk and protective factors

Identifying risk factors, protective factors, and the underlying determinants of disease is just one step toward a preventive approach. Risk factors vary substantially in how strongly they are associated with an outcome and also in how common they are within a population. As such, risk factors vary in their population attributable risk, or the extent of reduction in incidence that would be expected if the population were entirely unexposed to the risk factor, as compared with the actual level of exposure. Thus, some risk factors are more predictive than others, and addressing some modifiable risk factors can exert a more powerful effect in terms of prevention.

Individual risk factors are never as useful as profiles of risk factors. For example, data from the Framingham Heart Study have been used to combine a number of easy-to-assess risk factors to predict the 10-year risk of having a heart attack.4 Similarly, the Gail model estimates 5-year or lifetime risk of invasive breast cancer in women without a history of carcinoma in situ using a combination of risk factors.5 While risk prediction models are being studied in psychiatry, further advances are necessary before risk stratification (and thus selective and indicated preventive interventions) can be embraced in routine practice.

Prevention efforts take place across the life span. However, because half of all mental disorders manifest by age 14 and three-fourths by age 24, special emphasis must be placed on prevention in childhood and adolescence (and especially early childhood) if true primary prevention is to be accomplished.6 Effective, high-quality prenatal care and screening of new mothers can have a robust impact on the risk and detection not only of postpartum depression but also of behavioral and emotional problems for the child as he or she grows up.

A gold-standard intervention in preventing adverse behavioral outcomes is the Nurse-Family Partnership, which has been replicated many times and has followed infants and their families for almost 20 years. Findings show that mothers have improved prenatal health and greater economic self-sufficiency, and children experience fewer episodes of abuse and neglect, fewer injuries, and fewer juvenile and adult incarcerations.7-9 Other interventions include Head Start and the HighScope Perry Preschool Program, school-based bullying prevention programs, and group-based interventions for the prevention of depression in at-risk high school students.10-13 Such programs, whether delivering universal, selective, or indicated preventive interventions, aim to reduce the risk and incidence of mental illness or other adverse outcomes.

We do not deny that the primary duty of contemporary psychiatry is to evaluate for and treat mental illnesses, with a goal of reducing disability (tertiary prevention) and promoting recovery. However, we are cautiously confident that our field is also advancing in the direction of prevention of mental illnesses and the promotion of mental health more broadly. Some of the tasks ahead for this journey toward a re-envisioned and re-engineered psychiatry include:

• Identifying additional protective factors, particularly those that can be easily modified

• Clearly staking out our role in mental health promotion in the broader population, outside of the clinic

Antonio’s psychiatrist might not need a treatment for his unusual mannerisms or a means of focusing him away from ancient Mayan culture; rather, she needs an effective way to predict risk and then provide or prescribe evidence-based preventive interventions tailored to his level of risk. She needs an approach to interest Antonio “in the care of the human frame,” to use Edison’s words, and in the care of the human mind from a preventive perspective.

Edison’s wise prediction from more than 100 years ago was prescient for medicine, but also for psychiatry, since issues related to the causes and prevention of mental illnesses will surely be increasingly relevant to a modernized psychiatry. While unexplored frontiers in treatment undoubtedly remain, we believe that the real next frontier is studying, testing, proving, and applying preventive measures.

Dr Compton is Chairman of Psychiatry at Lenox Hill Hospital in New York. Dr Shim is Associate Professor in the department of psychiatry and behavioral sciences at Morehouse School of Medicine in Atlanta. They report no conflicts of interest concerning the subject matter of this article.