The latest research on DBT for treating psychiatric disorders, such as ADHD, bipolar disorder, eating disorders, and depression. 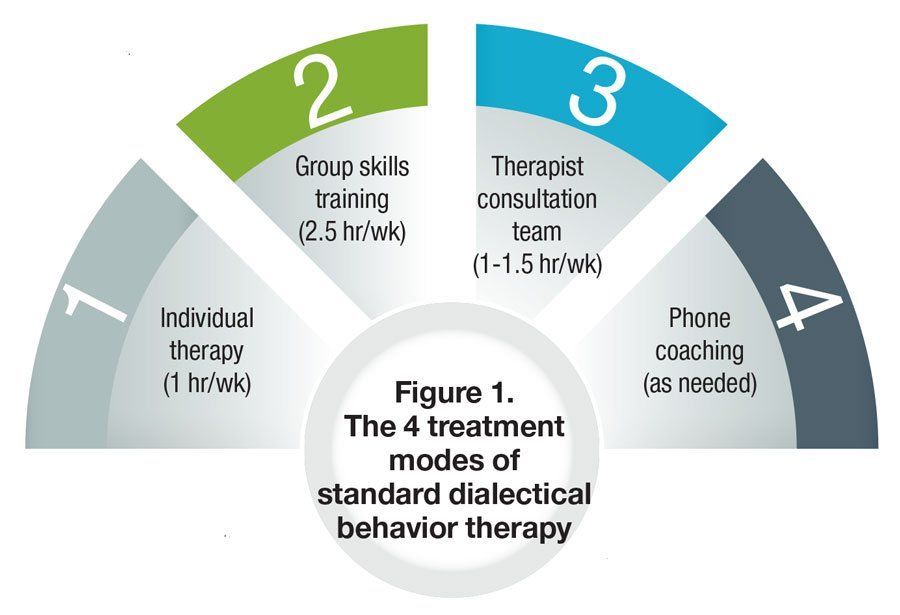 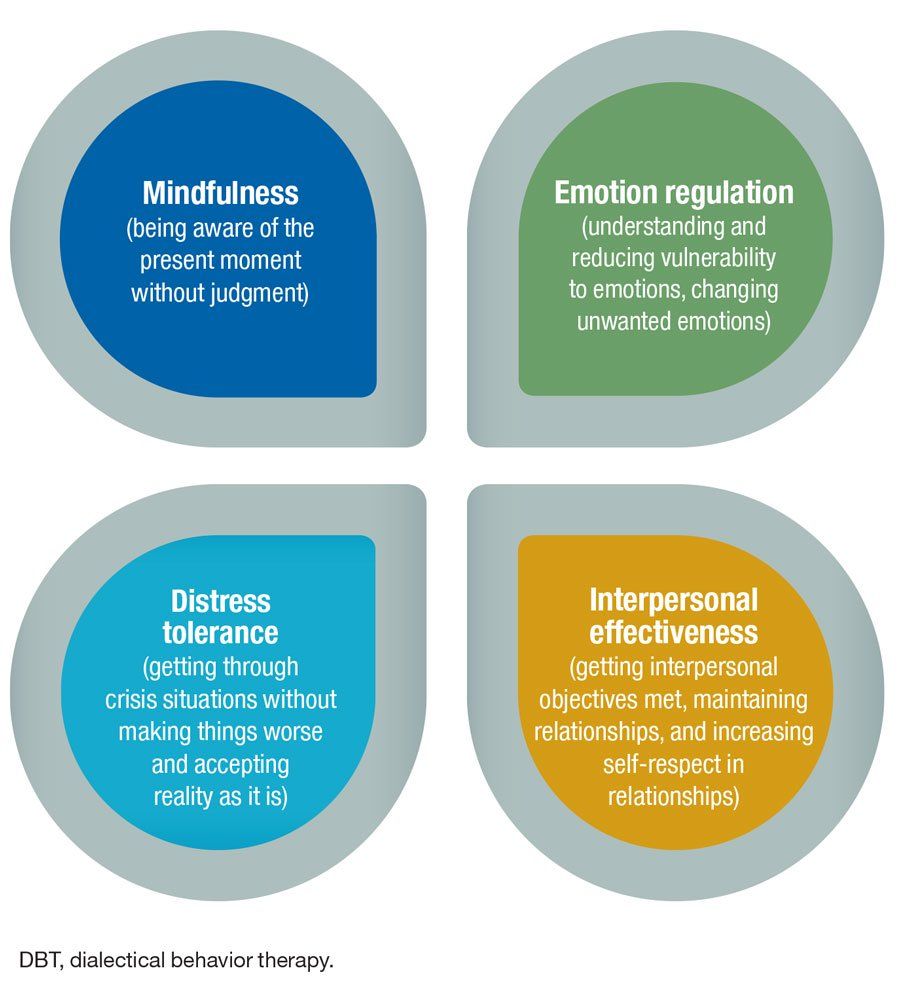 Dialectical behavior therapy (DBT) is a comprehensive, modular, cognitive-behavioral treatment that was originally developed to treat chronically suicidal individuals with complex clinical presentations and is best known as a treatment for borderline personality disorder. Meta-analyses have identified standard DBT as the most studied treatment available for borderline personality disorder and suicidal behavior, and DBT is widely recommended as a front-line treatment for these problems in professional guidelines.1-4

Standard DBT is typically delivered as a 1-year outpatient treatment modality with 4 modes (Figure 1). Standard DBT has primarily been evaluated as a treatment for individuals with borderline personality disorder. In this setting, it significantly decreases suicide-related outcomes (eg, suicide attempts, non-suicidal self-injury, suicide ideation), psychiatric hospitalization, use of emergency services, treatment discontinuation, depression, and substance use; it also increases social and global functioning.

DBT skills training is typically delivered in a group format to target the enhancement of patient capabilities. Specifically, the primary focus is teaching patients a set of behavioral skills and strengthening their ability to use those skills in their everyday lives (Figure 2).

DBT assumes that many of the problems exhibited by patients are caused by skills deficits. In particular, the failure to use effective behavior when it is needed is often a result of not knowing skillful behavior or when or how to use it. For example, deficits in emotion regulation skills are believed to be a core problem in individuals with borderline personality disorder, and these deficits result in maladaptive behaviors to regulate emotions (eg, suicide attempts, non-suicidal self-injury, substance use). Consistent with this skills deficit model, the use of DBT skills during standard DBT and DBT skills training has been found to fully or partially mediate improvements in suicidal behavior, non-suicidal self-injury, depression, anger control, emotion dysregulation, and anxiety.

A recent analysis evaluated the importance of the skills training component of DBT. Interventions that included skills training were found to be more effective in re­ducing non-suicidal self injury, depression, and anxiety.7 Taken together, these findings suggest that DBT skills are both a mechanism of change and a critical treatment component.

In clinical practice, DBT skills training has often been offered as a stand-alone or adjunctive intervention in settings where a comprehensive DBT program is not feasible or appropriate. Until recently, however, there was little research to support the use of DBT skills training separate from standard DBT or to guide clinicians in how to structure these interventions. DBT skills training interventions have now been evaluated in 13 published and peer-reviewed randomized clinical trials that have varied widely in the clinical population targeted, the duration of treatment, the specific skills taught, the degree to which skills were adapted, and the use of adjunctive treatment components. Emotion regulation and mindfulness are the most commonly taught skills modules, while interpersonal effectiveness is the most likely to be omitted. In addition, many studies included only a subset of skills within a larger module (see the DBT® Skills Training Manual,5 pages 110 to 122, for detailed skills curricula).

In these studies, DBT skills training interventions have improved a variety of conditions. (Monthly updates on the latest DBT research can be found on the Linehan Institute website: http://www.linehaninstitute.org/latestResearch.)

Anxiety. No studies have evaluated DBT skills training interventions for primary anxiety disorder. However, several studies have found DBT skills training to be more effective than active treatment controls in reducing anxiety severity among individuals with borderline personality disorder, high levels of emotion dysregulation, and a history of childhood abuse.15-17 In addition, a component analysis found that DBT interventions that included a skills training component were more effective than those without skills training in reducing anxiety severity among suicidal and self-injuring individuals with borderline personality disorder.7

ADHD. Two studies that used active treatment controls demonstrated the effectiveness of DBT skills training for attentional difficulties. In the earlier trial, DBT skills training led to a greater reduction of ADHD symptoms than a semistructured discussion group for individuals who maintained a stable medication regimen and completed treatment.18 A recent study of college students compared skills training with self-study handouts.19 Symptoms of inattention were significantly reduced in the DBT group by the end of follow-up; mindfulness and quality of life improvements were evident at the end of treatment, and improvement in mindfulness persisted through the follow-up period.

Additional research with larger samples and consistent DBT skills training curricula is needed to draw firm conclusions. Nevertheless, the effectiveness of DBT skills training appears to be robust despite variations in treatment length and skills content, which suggests that such training in multiple forms is likely to be useful for different clinical populations.

Acknowledgment-We would like to acknowledge the work of Drs Marsha Linehan, Linda Dimeff, Erin Miga, and Kelly Koerner in compiling a list of DBT randomized controlled trials at Behavioral Tech, LLC.