The Faces of Madness

If a picture is worth a thousand words, how many diagnoses can it make? The photographer and psychiatrist Hugh Welch Diamond, MD, shares insights into the humanity and stigma of mental illness in Victorian England. 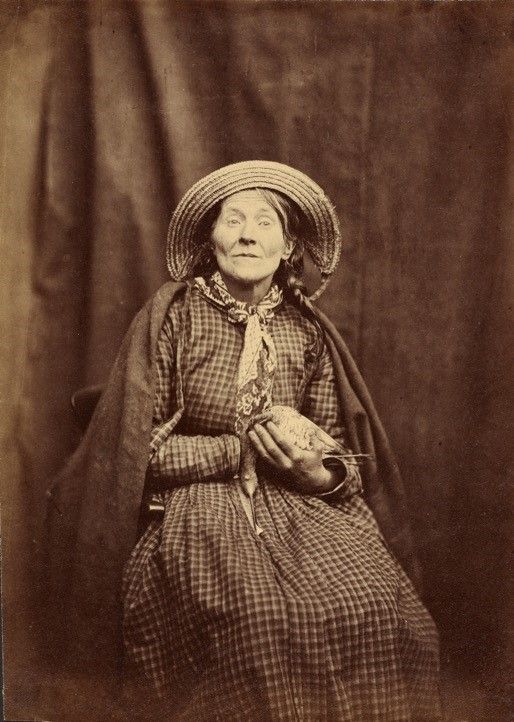 A woman sits in front of a camera. She wears a straw hat, checkered dress, scarf, and a blanket over her shoulders. She looks up at the viewer, away from the dead bird she holds in her hands.

Taken in Victorian England at the dawn of photography, this was among the first photographs of an individual with a mental illness. It was captured by the so-called “father of psychiatric photography,” Hugh Welch Diamond, MD (1808 to 1886), who was the first to apply the technology of photography to the study of mental illness. He believed that his patients faces would reveal their mental states.

From 1848 to 1858, Diamond was the superintendent of the female division at the Surrey County Asylum, where he took photographs of his patients, supposedly to aid in diagnosis and treatment. His 40 collodion photographs were exhibited for expert scientific circles and the general public, and shaped ideas about what mental illness looks like. Diamond hoped that the apparent objectivity and realism of photography, in comparison to the supposedly unfaithful hand of illustrators and artists, would help to scientize psychiatry and physiognomy, and create a semantics of facial expression that directly correlated with diagnosis.

Diamond and his photographs straddled the worlds of science and art. His work is housed in various artistic and scientific museums and archives and published widely; just as Diamond’s personal biography braided together the fields of photography and psychiatry, his documentary photographs blur the distinction between art and science. In fact, Diamond was even more famous in the world of photography, which his work served to popularize.

Diamond’s photographic project endorsed many of the era’s prevailing theories—such as the value of systematic and empirical categorization based on the collection of specimens (which intersected with his antiquarian interests); ideas about physiognomy and the physical manifestation of one’s internal mental state; and the asylum reform movement that advocated for a more humane method of treatment without physical restraints. As an advocate, Diamond shaped beliefs about mental disability and the rights of mentally ill individuals. His photographs make clear why these individuals deserved to live in humane conditions. Specifically, Diamond believed that by improving his patients’ external circumstances (ie, clothes, environment, hygiene), their mental illness would consequently improve.

Critically analyzing non-verbal and visual indicators reveals the contradictions and ambiguity of using such photographic data to try to diagnose or identify mental illness. Diamond’s photographic images were not objective depictions of mental illness, but rather reflections of the predominant cultural understanding at the time. His reliance on props (a dead bird), clothing (disheveled dress, shawls and blankets), poses (head resting on the hand), and culturally determined iconography (Ophelia’s headdress from Hamlet) to indicate mental illness seemingly contradicts the theory of physiognomy, which should not require externally imposed symbolism. The photos demonstrate the opposite of what he intended, since there is nothing intrinsic in these women’s bodies or faces that demarcate them as mentally ill.

Further, these photos did not stand on their own but required diagnostic labels and narrative case notes from another contemporary psychiatrist, John Conolly, MD. This further reflects the futility of faith in physiognomy, the belief that an invisible mental state can be rendered visible, like stigmata, without supplementary information. Diamond (and Conolly) used circular reasoning to reach their conclusions: knowing that these women were ill, or melancholic, or maniacal, they looked for such indicators that would confirm their preconceptions. Diamond’s photographs must be situated within a longer tradition, in which cultural conceptions of mental illness already underlie the images used for diagnosis.

On the one hand, his portraits perpetuate the stigmatization and pathologizing of these women. They are instances of a type. In taking the photographs, the “insane” label was forced upon them, freezing them as a permanent record in the canons of mental illness. These anonymous women are the objects of our attention because their suffering and individuality are supplanted by their images. On the other hand, Diamond’s photographs also humanize and individualize these patients, with whom we continue to engage more than 150 years later.

As Diamond said, the photos allowed viewers to “witness this exhibition of human suffering.” They could have “hardly imagine[d] this peculiar state of mental prostration” if they had never encountered someone with a mental illness.1 The realism of the documentary photographs, in comparison to artistic portraiture or medical illustrations, allows the contemporary viewer to sense the presence of a real human in the frame. Despite the inherent paternalism of asylum life and the power of the photographer, as we look into their eyes, these women regain some agency and individuality as co-creators of these lasting images. Ultimately, while Diamond’s project did not prove what he intended, these women humanize the face of mental illness. The women were silent, but their gazes speak volumes.

Wetzler is a medical student at the Icahn School of Medicine at Mount Sinai, New York.

1. Diamond HW. On the application of photography to the physiognomic and mental phenomena of insanity. Gilman S, ed. Face of Madness: Hugh W. Diamond and the Origin of Psychiatric Photography. Echo Point Books & Media; 2014.