The express goal of this guidebook: “to bring together comprehensive data about murder within the family, as well as real-life stories of this tragedy.” 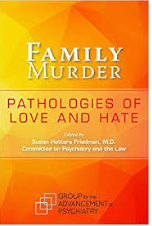 Reviewed by Karen B. Rosenbaum, MD

True crime has become increasingly popular, as evidenced by the well-attended “Death Becomes Us” True Crime convention in New York City in March 2019; numerous podcasts on true crime; and increasing numbers of novels, documentaries, and dramatic series depicting true crime. For example, the podcast Serial (2014) about the murder of Baltimore teenager Hae Min Lee recently became an HBO documentary series (2019). In the popular podcast My Favorite Murder, Karen Kilgariff and Georgia Hardstark tell each other true crime stories each week with comic interludes. Their tagline, “Stay sexy and don’t get murdered.”

Consistent with the true crime trend, in Family Murder: Pathologies of Love and Hate, Susan Hatters Friedman, MD, (and other authors on behalf of the Committee on Psychiatry and the Law of the Group for the Advancement of Psychiatry) uses a high-profile true crime vignette at the beginning of each chapter to illustrate its subject matter. In the introduction, Susan Smith, a notorious mother who drowned her two sons in a lake in 1994, is presented, and her story is used again in chapter six as an example of child murder by parents. The high-profile case of Lyle and Erik Menendez, which was recently made into a Law and Order miniseries (“Law and Order True Crime: The Menendez Murders”), was used to introduce parricide in chapter eight.

In addition to addressing compelling material, the comprehensive book on family murder serves as a guide to all psychiatrists-not only those who practice forensic psychiatry-on how to handle cases in each chapter. This book also would be relevant to general psychiatrists who may encounter patients with a history of violence or violent thoughts against family members, or patients who have been exposed to traumatic familial incidents. Topics covered include intimate partner homicide by men and women, feticide, neonaticide, fatal maltreatment and child abuse resulting in murder, child murder by parents, siblicide, parricide, intimate partner homicide in elderly populations, and familicide.

Each chapter is divided into multiple subsections-including the true crime introduction, background information, epidemiology, motivations, and multiple references-and addresses prevention, risk assessment, aftermath, and legal issues. All chapters offer guidance for the psychiatrist on the mentally ill offender and information on whether mental illness is a common contributor in the type of family murder. The statistics are often surprising. For example, when antisocial personality disorder is dropped, fewer than 5% of mentally ill parents have maltreated their children. The authors explain throughout the book that although a great deal of publicity surrounds the murder of family members, such murders are rare and, therefore, research and data in this area are limited.

I spoke to editor and author, Susan Hatters Friedman, MD, about the motivations for writing the book. She explained, “We sought to bring together comprehensive data about murder within the family, as well as real-life stories of this tragedy. We hope that the book is helpful to those completing evaluations after the fact-but, moreover, helpful to the ultimate goal of prevention.”

An interesting aspect of family murder described in the book is that there are often motivations of “love” as well as “hate,” as indicated in the subtitle, and the motivations are generally complicated. For example, in the story described in chapter nine, an 88-year-old man had shot his 86-year-old wife in a hospital room and planned to shoot himself as well but was apprehended. He explained clearly to authorities his altruistic motive that his wife had been begging to die.

Family Murder is an in-depth guidebook that synthesizes the available research. It will be helpful for forensic psychiatrists who are evaluating someone who killed a family member or intimate partner and for general psychiatrists who are seeing patients for whom they are worried about the risk of family violence. The book will also be of interest to attorneys involved with these cases, as well as to the general public interested in true crime, since it is well written and concise. It will broaden the true crime fan’s knowledge about family murder, as the book situates the case vignette within what is known in the literature about that type of murder.

This article was originally published on 6/4/2019 and has since been updated.