Have a Happy New Year!

Sometimes, when I recommend an antidepressant, patients will ask if it will make them happy. No, I usually eventually answer. I try to gently and empathically point out that what we have are called antidepressants. They are not called happy pills for a good reason. 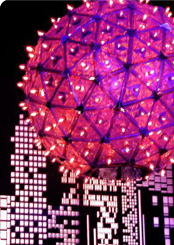 “The purpose of our lives is to be happy.”
–The Dalai Lama

Sometimes, when I recommend an antidepressant, patients will ask if it will make them happy. No, I usually eventually answer. I try to gently and empathically point out that what we have are called antidepressants. They are not called happy pills for a good reason. They don’t directly make you happy, but they may give you a better opportunity to become happy. This is never quite a satisfactory discussion.

At least, as I try to reassure myself, that is more positive than Freud’s conclusion that his “talking cure” could only change our illusions into “common unhappiness.” It seemed like this conclusion of Freud’s didn’t go over particularly well after his visit to the USA about 100 years ago. No wonder. After all, our Declaration of Independence not only states that we have the right to life and liberty, but also to pursue happiness. Who was Freud to tell us that such a pursuit was an impossible dream? Contrast this with our neighbor Canada’s emphasis on “peace, order, and good government,” although I must say that on my annual visits to Canada, the people there seem just as happy as in the USA.

Since Freud’s visit, the mental health field as it developed seems to have an ambivalent relationship to happiness. Indeed, much of what we traditionally have done can take away a sense of happiness as we try to treat certain problems and symptoms. Why, we can even seem at times like the scrooges of happiness!

Sometimes, though, our patients can receive what they think is a surprise present. “Hey, Doc, I thought that new antidepressant wasn’t going to make me happy. I’ve never been happier in my life”! Eventually, I realized the recurrent depressions were the initial manifestations of a Bipolar II Disorder and here was a hypomanic state likely precipitated by the antidepressant. It took the reluctant stopping of the antidepressant to go into another direction in the treatment. Paradoxically, though, our medications treat the manic mood swings better than the depressed ones, which is usually the opposite of what the patient wants. They often wish the medication would take away the depression, but leave a mild hypomanic state where the patient subjectively feels better and can do more.

Then there are the cocaine abusers who feel the most happy when using the drug. Alcohol, “ecstasy,” and other drugs can produce a mild, transient felling of happiness and/or satisfaction. Here, too, we can inadvertently produce a kind of euphoric happiness. Just make a mistaken diagnosis of Attention Deficit Disorder in a teenager who might not only enjoy the stimulating effect, but share or sell it to friends.

No wonder that a few patients will press me further. “So, Doc, what will make me happy?” Finally, in recent years, research is providing some answers. All this research in what has become known as Positive Psychology seems to have started about 20 years ago with a simple study by the psychologist Robert Zajonc, who found that smiling seems to produce happiness. Though there is still no clear explanation for why, the assumption is that the physiological effects of smiling changes some brain chemistry, sort of like how we don’t know how Electroconvulsive Therapy (ECT) works. Not only has this study been replicated many times, but there seems to be a halo effect in making those around the (genuine) smiler feel better too. Maybe this is why surveys indicate that people notice the smile of someone they first meet much more often than the eyes, smell, clothes, or hair.

Although at first I felt a lot of this research was simplistic and perhaps not so important, especially because one couldn’t keep smiling all the time, it made me happy because my father long ago gave me the nickname of “Smiles.” As it seems to turn out though, smiling seems to evoke only one kind of happiness, the more transient state of feeling positive. There also seems to be a deeper, more lasting state of happiness akin to a sense of satisfaction and contentment.

We do seem to have different natural thermostats of “happiness.” But the good news is that genetics seem to account for only 50% of our happiness. To my surprise, only 10% seems to be generally attributed to life events, while 40% seems to be determined by what we do and/or think. That leaves a lot of opportunity for any of us to increase our happiness. Taking advantage of that, the psychologist Martin Seligman, lead researcher and an anti-Scrooge, has set up a series of exercises on a much used website, as one way to become happier. (See: http://www.authentichappiness.sas.upenn.edu/Default.aspx)

Although of course there is individual variation for the transient feelings of happiness, several general categories seem to correlate. One is how the body can make our mind feel happier via enjoyable sex (the highest correlate of any variable), other enjoyable physical activities ranging from distance running to yoga, and sleeping well. Mental activities that seem to help are praying, meditating, keeping positive experiences in mind, and focusing on what needs to be prioritized. Activities or behavior which help are listening to favorite music, socializing with those you like and value, giving away things to others, and making more money up to $75,000 (relative to the current cost of living in the USA).

Sometimes, there can be overlap of the correlates of transient states of happiness with the more persistent states of happy satisfaction, and sometimes not. For instance, having children often causes as much daily distress and loss of income as it does daily happiness, but later can contribute to a much more satisfying sense of one’s life. The more ongoing states seem to correlate with some other variables. Here, the only physical correlate is age, which is a U-shaped representation over one’s lifetime, with happiness often dipping in the 30s and 40s, and then increasing from age 50, as older people seem to find out what matters most. The main correlate with mental processes is the capacity to feel gratitude.

Many more variables are in the area of social interactions, including altruistic life goals, having a sister, an emotionally significant other (who is not unhappy), strong religious faith, and living in a country like Bhutan that actually emphasizes national happiness as much as economic success. Bhutan’s concept of Gross National Happiness includes culture, health, education, and environmental priorities. Increasing income helps, though the largest effect is in the range of $40,000-70,000 USA dollars.

As may be expected, there are many happiness reducers. Some are bodily: sleep disorders, chronic pain, and inadequate access to medical care. Some are mental: thinking about money, depression, and dissatisfaction with government. Social influences include coming from a single parent family, poverty, and loss of employment. No wonder so many seem angry and unhappy during our recent recession.

Given some of these variables, you’d think that if our country was truly dedicated to life and the pursuit of happiness, that adequate healthcare reform and insurance would have happened long ago. Turning this around, it also seems that happier people are healthier and more productive. Isn’t that in our national interest?

None of this research, as far as I know, has focused on specific professions like psychiatry or other mental health professions. Nevertheless, we may be able to extrapolate that our professional work may have paradoxical effects on our ability to be happy. On the one hand, our work can lead to deep satisfaction with our life work, as I tried to describe in last month’s blog, “Thanks to Psychiatry.” We make a good living by helping others. On the other hand, in contrast to the rest of medicine, our work doesn’t elicit a lot of thanks or presents. Stigma feels negative. And, trying to be empathic all day long with unhappiness can be quite emotionally draining. All this makes it important to use off-work hours to enhance our own happiness.

I now realize I underestimated the importance of happiness. So, I most seriously wish you and your family, and your patients, a most Happy New Year in the deepest sense of what this can mean.