Illicit Drug Dependence Across the Globe: Results From the Global Burden of Disease 2010 Study

How prevalent is dependence on amphetamines, cocaine, opioids, and other illicit drugs across the world? What is the associated disease burden? Insights here. 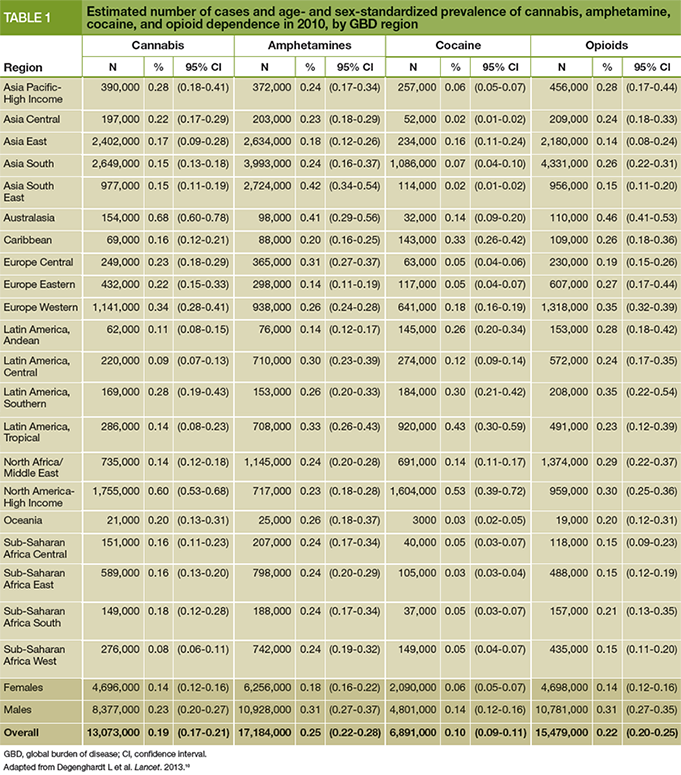 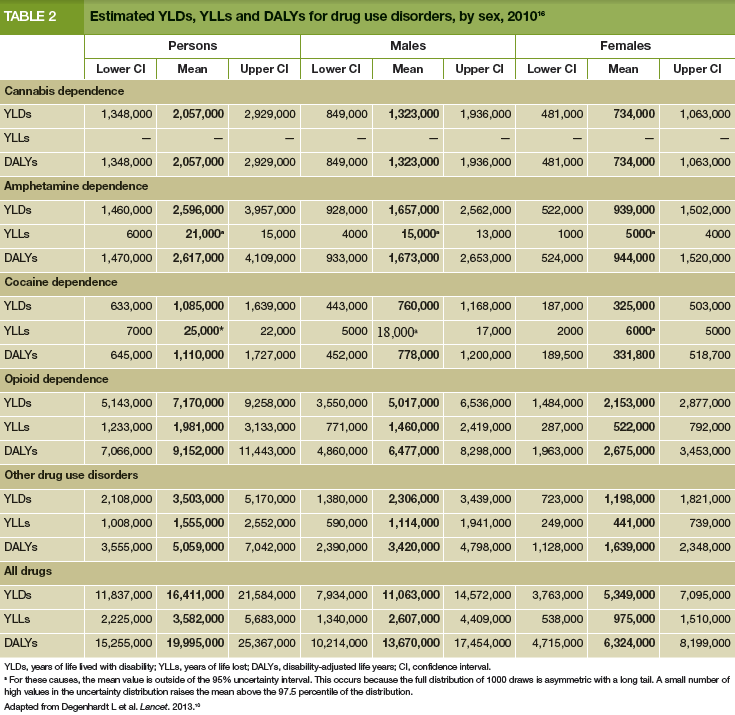 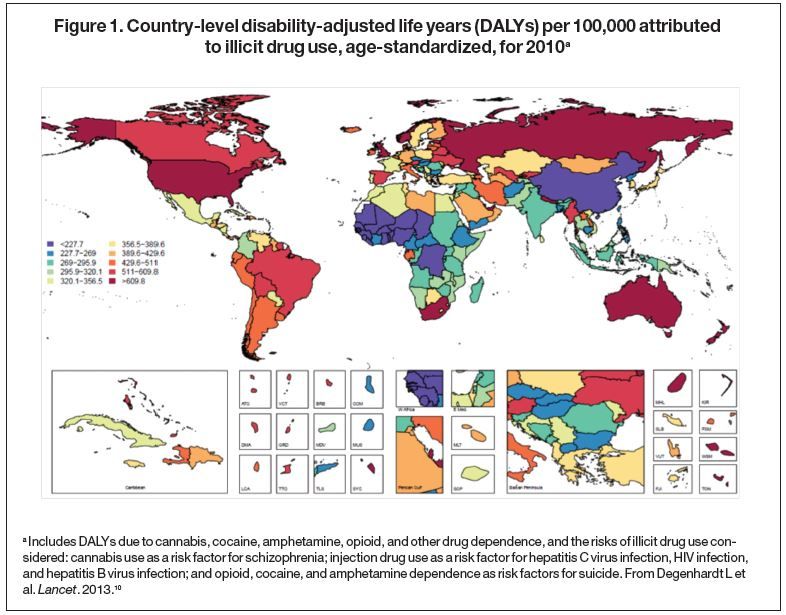 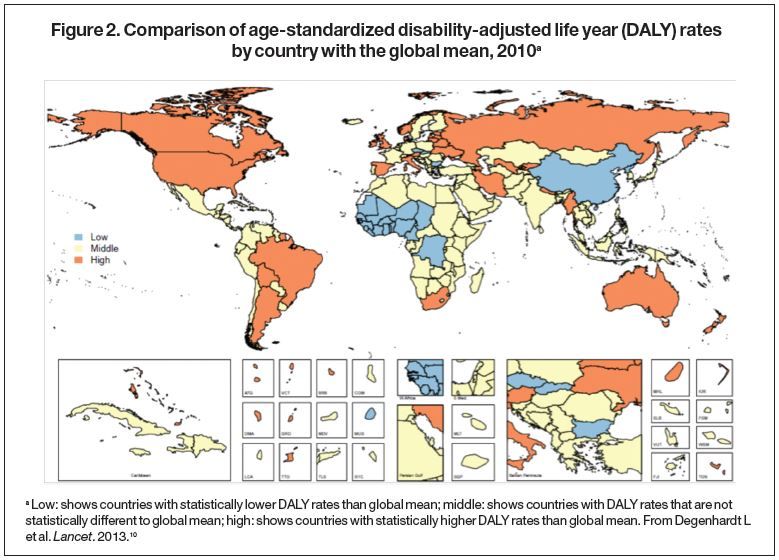 “Illicit” drugs are those whose nonmedical use is prohibited under international drug control treaties.1,2 They include plant-based drugs such as heroin, cocaine, and cannabis; synthetic drugs such as amphetamines; and pharmaceutical drugs such as opioids and benzodiazepines. Traditionally, the view has been that illicit drug problems are concentrated in the developed countries, but it has become clear in the past 2 decades that these problems are truly a global phenomenon that spares very few if any countries. However, services to respond to these problems are unevenly distributed: the largest concentration is in wealthier countries, and many countries have virtually no services.

The health risks of illicit drug use increase with the frequency and quantity used. Drug dependence is defined by the International Classification of Diseases (ICD) as the presence of 3 or more indicators of dependence for at least a month within the past year.3 These include a strong desire to take the substance; impaired control over use; withdrawal upon ceasing or reducing use; tolerance to the effects of the drug; requiring larger doses to achieve the desired psychological effect; a disproportionate amount of time spent by the user obtaining, using, and recovering from drug use; and continuing to take drugs despite the problems that use causes.

Since 1993, estimates of the causes of global disease burden have used the disability-adjusted life year (DALY),4 which combines premature mortality (years of life lost [YLLs]) with morbidity due to disability (years of life lived with disability [YLDs]). The operationalized definition of “illicit drug use” has changed since the original Global Burden of Disease (GBD) study. Drug use in the GBD 1990 study was defined as “dysfunctional and harmful drug use” overall, without specifying drug type.5

In 2002, the GBD comparative risk assessment exercise estimated the proportion of disease burden attributable to alcohol, tobacco, and illicit drug use.6 According to the World Health Organization, the use of amphetamine, cocaine, and opioids accounted for 0.9% of global DALYs in 2004.7 This was an underestimate because it did not include the burden attributable to cannabis, hepatitis B and C from injection drug use, or drug-related violence (eg, homicide).8,9

The GBD 2010 study was the first to calculate the burden of illicit drug dependence separately for amphetamines, cocaine, opioids, and cannabis. It also included a greater number of outcomes than the comparative risk assessment exercise. This article summarizes data from the GBD 2010 study on the prevalence of dependence on these illicit drugs and the resultant disease burden, which have been detailed in earlier publications.10,11 It also briefly examines approaches to the treatment of these disorders.

Opioid and amphetamine dependence were the 2 most common forms of illicit drug dependence globally in 2010 (15.4 million and 17.2 million estimated cases, respectively; Table 1). There were 13.1 million cannabis-dependent and 6.9 million cocaine-dependent persons. Males formed the majority of cases (64% each for cannabis and amphetamines, and 70% each for opioids and cocaine).

Direct burden of drug use disorders

Males accounted for approximately 70% of DALYs for opioid and cocaine use, and 64% of DALYs for amphetamine and cannabis dependence. This sex difference was apparent in all age groups (Table 2). Each of the drug use disorders followed a fairly consistent age pattern: DALYs rose sharply between the ages of 15 and 24, peaked between 20 and 30 years, and steadily declined thereafter. The steepest decline was in cannabis use.

Figures 1and2 present 2010 country-level DALY rates (age-standardized, per 100,000) for drug dependence as well as the risks of drug use considered above. Countries with the highest overall illicit drug burden (greater than 650 DALYs per 100,000) included, among others, the United States, England, the Russian Federation, and Australia.

It is difficult to estimate global trends in illicit drug use and burden of disease over time. Drug use is routinely assessed in only a minority of high-income countries. Assessment of trends in other countries often relies on indirect indicators of drug supply, drug use, and problems related to drug use.12

Some indicators suggest that global illicit drug consumption and its related disease burden have increased since 1990. Injection drug use, for example, is now reported in more countries, and HIV infection among persons who inject drugs is more prevalent in Eastern Europe, Central Asia, and Southeast Asia.13,14 The global manufacture of amphetamines has increased, as has the number of problematic methamphetamine users in Southeast Asia and the Middle East.15 Opium production and heroin trafficking routes have shifted. African countries are now used for transhipment of illicit drugs to European markets, and illicit drug use has reportedly increased in these countries. In Western Europe, the US, and Australia, cannabis use has stabilized or declined, while the use of 3,4-methylenedioxymethamphetamine (MDMA) and methamphetamine has increased.15,16

Analysts differ in their interpretation of these global trends. A United Nations Office on Drugs and Crime report concluded that illicit drug use had stabilized and perhaps decreased between 1998 and 2007.17 By contrast, a RAND report undertaken for the European Union concluded that global illicit drug use had, at best, remained stable and possibly increased during this period.16

The burden of illicit drug use disorders estimated in the GBD 2010 study was 52% higher than estimates for 1990 (also made in the GBD 2010 study), when the estimated direct burden was 13.1 million DALYs, or 0.5% (95% CI, 0.4% - 0.7%) of all-cause DALYs.10 Much of the change over time could be attributed to population growth, with the exception of opioid dependence. Forty-two percent of the increase in the burden of opioid dependence was attributed to increased prevalence between 1990 and 2010; the burden increased by 74% during this period.10

This is the first study to estimate the global, regional, and country-level prevalence of dependence and burden of disease attributable to 3 major types of illicit drugs (opioids, stimulants, and cannabis). A number of key findings emerged. First, all forms of drug dependence and disease burden are highest among young men in their 20s. Clearly, these disorders adversely affect young adults at a crucial time in life. At a global level, illicit drug dependence was the 8th largest contributor to disability among males, up from 10th in 1990.18

Second, although cannabis was by the far the most commonly used illicit drug worldwide, the prevalence of cannabis dependence was lower than that of amphetamine and opioid dependence.9,19 Cocaine dependence had the lowest estimated prevalence and appeared most geographically concentrated in North and South America.

Among drugs, the highest estimated global burden was attributable to opioid dependence. This reflected its greater contribution to premature mortality, its higher disability burden, and the comparatively larger global population of dependent opioid users (9.2 million DALYs, almost half of the direct illicit drug burden). The opioid DALY estimates were about 8 times those for cocaine dependence, and 4.5 times those for cannabis dependence.

Opioid dependence and injection drug use are significant contributors to the global disease burden, much of which could be averted by scaling up needle and syringe programs, with opioid substitution treatment, and with HIV antiretroviral therapy.21,22 There is increasing evidence that the burden of HIV infection and hepatitis C virus (HCV) infection can be reduced through a combination of needle and syringe programs and opioid substitution treatment; HCV infection burden can also be decreased by effectively treating chronic hepatitis C. The release of more effective and less toxic drugs to treat HCV infection is expected to dramatically improve what have been extremely low rates of treatment uptake by people who inject drugs.23

Effective policies to reduce the burden attributable to stimulant dependence are not as clear. A wide range of pharmacological interventions have been tried for the treatment of amphetamine and cocaine dependence without producing effective agonist pharmacotherapies.24 Behavioral interventions are effective in the treatment of psychostimulant and cannabis dependence.25,26 Much more research is needed, however, into how to scale up these behavioral approaches to reduce the population prevalence of these disorders. Concentrated epidemics of HIV infection have occurred in many developing countries, and there is an urgent need to upscale and broaden access to opioid substitution treatment as part of a broad public health strategy. Such an approach requires the combined skills of public health, mental health, and addiction treatment professionals in order to organize a safe and effective treatment strategy.21

We did not explicitly estimate the prevalence and disease burden related to MDMA (ecstasy), hallucinogens, inhalants, or the nonmedical use of benzodiazepines because of limited information on their prevalence of use and the quantification of their harms. However, the inclusion of the “other drug use disorders” category is a crude attempt to capture this burden. We also did not separately estimate burden attributable to any form of ICD-10 harmful use/DSM-IV abuse. This was because of concerns about the validity of these diagnostic categories, limitations in existing epidemiological data, and the probable low disability caused by these disorders. Future updates of the GBD estimates may reconsider this decision. They will also need to deal with the changes in DSM-5, which now defines “use disorder” with 3 levels of severity and no longer distinguishes between “abuse” and “dependence.”

Although this study made use of sophisticated modeling to impute results where data were not available and propagate uncertainty, it is clear that a significant amount of research is needed to document the most basic epidemiological parameters for drug dependence in most countries. Until such work is done, considerable uncertainty will remain about the exact size of the global disease burden that is attributable to illicit drug use.

Illicit drug use is an important contributor to the global disease burden, larger than many mental disorders and greater than all maternal conditions combined.27 Our estimates of this burden can be improved with future iterations of the GBD study, but we now have the first global picture of this cause of health loss. It is clear that much can be done to reduce this burden. Although we have more limited means of responding to some causes of burden, such as cocaine and amphetamine dependence, well-evaluated and effective interventions can substantially reduce 2 major causes of burden-opioid dependence and injection drug use. The challenge is to deliver these interventions efficiently and on a scale needed to have a population-level impact.

5. Murray CJL, Lopez AD, eds. The Global Burden of Disease: A Comprehensive Assessment of Mortality and Disability From Diseases, Injuries, and Risk Factors in 1990 and Projected to 2020. Cambridge, Mass: Published by the Harvard School of Public Health on behalf of the World Health Organization and the World Bank; Distributed by Harvard University Press; 1996.

9. Degenhardt L, Hall W. Extent of illicit drug use and dependence, and their contribution to the global burden of disease. Lancet. 2012;379:55-70.

Articles in this issue
Global Child Mental Health
Mental Illness vs Brain Disorders: From Szasz to DSM-5
Medicare to Drop Antidepressants as Part D “Protected Class”
Correctional Psychiatry: Challenges and Rewards
Can You Trust Your Physician?
Altered Mental State: The Clue in the Blue Bottle
X-Ray Vision
Update on Seasonal Affective Disorders: Clinical Issues and Treatment Strategies
Is Suicide Immoral?
Psychiatry in China: Its Relevance for the US
Preparing for the Graying of the World: Meeting the Needs of Older Adults
The State of Psychiatry in Russia
Illicit Drug Dependence Across the Globe: Results From the Global Burden of Disease 2010 Study
Related Videos
Related Content