Memory Reconsolidation and What Albert Ellis Knew All Along

I can almost hear Albert Ellis saying “Amen” to the data I am about to share. To explain his reaction, I have to talk about war. 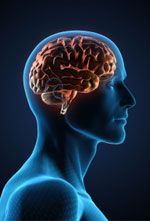 I can almost hear Albert Ellis saying “Amen” to the data I am about to share. To explain his reaction, I have to talk about war.

As a former military brat (my father was an Air Force “lifer”), I grew up hearing about large-scale military plans designed mostly to contain the formidable Soviet threat. Once that threat dissolved, those large-scale strategies had to undergo a radical revision-an amending process that is ongoing today. We are learning to confront smaller threats in countries whose formal militaries we can overthrow in weeks, sometimes days, but whose informal warriors can take years to defeat. It is sometimes called “asymmetric warfare”: the operations in Iraq and Afghanistan are prime examples.

Many things concern me about our military operations in those theaters, but one of them touches on a professional interest-the growing incidence of posttraumatic stress disorder (PTSD). There are 3 reasons that prick up my research instincts, all springing from this asymmetric warfare.

• First, there are no real “fronts” to many of these operations. As a result, soldiers who used to be able to sit comfortably in the rear (often called the “tail”) are now as exposed to the hazards of combat as those charged with fighting (often called the “tooth”). Consequently, the pool of soldiers who are potential candidates for PTSD has increased. This means the research cohort is getting larger and increasingly better defined.

• Second, soldiers are returning into these asymmetric environments multiple times for very long periods. This provides an opportunity to study the mental health effects of combat over a sustained period of years-valuable for countries such as Somalia and parts of Uganda, which have been in a continuous state of war for decades.

• Third, the number of women exposed to combat is increasing. Since there is growing evidence that men and women process stress very differently, these populations represent valuable research opportunities to ask and answer sex-based questions regarding the effects of combat on behavioral outcomes.

All of these issues present mental health challenges, enormous scientific opportunities, and a compelling reason to vastly increase funding for research into the long-term effects of disorders such as PTSD.

Into this breech comes a very interesting finding of potentially great value for the mental health community in general and the American military in particular. It involves new insights into how the brain copes with fearful stimuli in the midst of a cognitive process called “reconsolidation.” The finding suggests powerful noninvasive behavioral protocols that might have real applications in the modern battlefield, and in this column, we are going to discuss it. We’ll start with some background information (dusting off some old skinnerian nomenclature), talk about the cognitive neuroscience behind reconsolidation, then move directly to the data.

Does that ring a bell? It might, if we add back Pavlov and his canonical experiments involving teaching a dog to salivate whenever the animal hears one. The sound of the bell is the neutral stimulus as the experiment begins, which fully exploits the fact that dogs naturally salivate in the presence of food-something you don’t have to teach them. Food is thus the UCS, and salivation is the UCR. In a series of learning trials, the bell and the food are paired together. Whenever the animal hears a bell, the dog is presented with food. After multiple exposures, the dog salivates just to the bell. The bell is now transformed into the CS, and the salivation in response is the CR.

Understanding the concept of “consolidation” is considerably harder. There are many different types of memories, and different categories follow different consolidating rules. We are capable of experiencing classical conditions-combat veterans learn to pair very quickly the presence of tiny wires in dirt with a panic response. But they are also capable of remembering that the Battle of Hastings occurred in 1066, and most still know how to ride a bike. Different brain mechanisms are used for each type of memory, categories that are called by different names. The history lesson is termed “declarative memory,” for example.

When declarative memories are first formed, the traces are fragile, labile, and at great risk for extinction. To make a memory more durable, it has to undergo a series of processing steps (consolidation). Eventually the memories will reach a state in which they are infinitely retrievable and not subject to amendment. But it takes a great deal of time to render them permanent.

There is mounting evidence that every time you retrieve a memory-even ones you have fully consolidated-you return that memory to its former fragile, labile state. It then has to undergo another round of consolidation to stabilize-via reconsolidation. At the point where it is still fragile, it is temporarily subject to amendment, even loss. (The window is about an hour.) Although the particulars remain controversial, there is growing evidence that this Pause button exists in both animals and humans. It is this hour-long pause in the consolidation stream that a group of researchers in the psych department at New York University (NYU) used to do the following experiments.1

The idea for the NYU experiment1 was very simple: suppose a person learned a fear response in a classical condition paradigm, then was asked to recall the experience at a later time into memory. What if, during the hour the reconsolidation Pause button is in the On position, and the subject was treated to new, non-threatening, non–anxiety-inducing information?

The researchers decided to find out. They used human subjects, mild electrical shocks delivered to the wrist, and squares of different colors projected onto a video screen as their materials. The level of fear was assayed continuously using standard skin conductance measures. Participants’ memory behaviors were measured 10 minutes after exposure to certain stimuli, 6 hours after exposure, and 12 months after exposure.

The first manipulation was divided into 3 parts, which can be divided into the days in which the actual research took place.

Subjects were presented with a video screen that displayed squares of 2 different colors, which, as you’ll see, becomes the CS. Whenever subjects saw 1 of the colors (which I’ll call the “hot” color), they got a shock to the wrist. After a few repeated pairings, whenever the subjects saw the hot-colored square, their fear responses jumped considerably. The subjects were then divided into 3 groups, whose experiences I will talk about in a minute.

The next day, all groups underwent repeated exposure to the same 2 colored squares-this time without the electrical shocks. The attempt was to introduce an extinction experience process, to defang the effects of the hot color-and it worked. After a while, fear was reduced even for the hot color-and in all 3 groups. But what happened before this delightful fear reduction separated the subjects into their respective groups?

Why the difference in the period between the second and third groups? The idea for the second group was to bring back a fearful memory-but with new information about it-within their Pause button reconsolidation window (that’s why the 10 minutes) before undergoing extinction. The hot color was supposed to shock them, but it didn’t (which is what was new). So the fearful memory was retrieved but was soon greeted with this new, delightful finding, which would be reinforced when they underwent the formal extinction process.

The idea for the third group was to bring back a memory after the Pause button reconsolidation window (thus the 6 hours) before it underwent extinction. They, too, got delightful news, but there was no reinforcement within the 1-hour window. They had to wait 6 hours to start the confirming extinction procedure.

The last day-which was 24 hours after extinction-all groups underwent the same shock regimens done initially. This was an attempt to reestablish the fear response to the hot color. How did the 3 groups respond? (See Figure.) 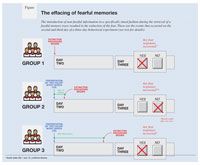 The first group-the controls-recovered their fear responses spontaneously. When they saw the hot color, their skin conductance immediately showed “fear.” The extinction procedures they had undergone the previous day were essentially a waste of time.

The third group, the ones who had been presented with “good news” but had to wait 6 hours before it could be reinforced, might as well have gone home. They showed the same spontaneous recovery and the same resistance to extinction.

The real research gold is what happened to the second group-the ones who had gotten “Hey, its going to be alright” information 10 minutes before extinction reinforcement procedures began. They showed no fear response when they were reexposed to the hot color. Their fears had been blocked by the administration of updated information. Even when tested a year later, the fear-response memory was still blocked. The effect was long-lasting, powerful, and event-specific. Controls were performed to ensure against a generalized bleed-through effect (this was to ascertain that interfering with the reconsolidation of 1 memory trace did not influence the processing of a similar stimulus).

This is a remarkable achievement. The ability to block fearful memories was done by capturing a reconsolidation window, without any pharmacological agent, but with effects as long-lasting as any medication. Memories marinated in apprehension could be blocked simply by updating them with positive information within a specific period of time. By amending the experience before the consolidating stopwatch struck “60 minutes,” a new perception, quite resistant to change, was obtained.

The potential mental health applications of this work are extraordinary, both for civilian and military populations. It may be very possible to boost the power of introducing non–self-defeating thoughts by exploiting the reconsolidation window. This would allow one to rewrite-even efface-toxic emotional memories, which would represent a noninvasive way of helping a person control his or her psychological interiors. In the future, an entire therapy may evolve around just such timing issues. These data are just begging for application-oriented investigations to commence.

Hear that rustling? That’s the sound of Albert Ellis, from his grave, mumbling his “Amen,” and possibly, “You see? I told you so.”