The Neurobiology of Conscious Intent

Pushing the edge of our understanding into the murky world of association cortex only means that future experiments will be trickier to interpret. 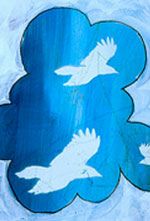 I seldom address the notion of consciousness-let alone motivations-in this column for a very good reason. Nobody really knows what they are or even if there is a “they.” The literature is confusing, but it hasn’t stopped researchers from speculating on possible neuroanatomical and biochemical substrates that undergird the phenomena. Without a broad consensus about what is being studied, there can be no neurons, let alone molecules, for active experimental consideration. After all these years, researchers have yet to isolate an area of the brain solely devoted to the experience of consciousness. There may be none.

Given the importance of these issues to the mental health professions, I revisit the concept of motivations from time to time-but only when the data are conservatively presented, with sober, modest conclusions. The findings described here originate from experiments that have attempted to determine how we voluntarily choose to perform a motor task (action planning). This work requires reviewing background information on association cortices and the neural substrates behind a decision to initiate voluntary action.

Functionally, the cortical regions of the brain and their myriad interlocking circuits can be divided into 3 modules. These consist of front-, back-, and middle-end domains.

• Front-end functional domains are sensory information processing centers. The brain receives input from the eyes, ears, and other sensory systems. It sends the input off to various places for further processing.

• Back-end functional domains involve motor control systems. These systems essentially respond to whatever command the sensory cortices give to it (eg, execute a decision to move).

• The middle-end suite involves nearly everything other than front-end and back-end functional domains. These association cortices generally entail higher processing features and are some of the least understood and the most mysterious parts of the brain.

One such cortex, located in the inferior posterior parietal cortex, is a sensorimotor association region that links sensory stimuli to motor movement. It may even be involved in sensory prediction, which calculates the consequences of a given action through the simultaneous evaluation of input from both sensory (front-end) and motor (back-end) functional domains.

Exactly what does it mean to want to do something? We do not really know. The events that initiate movement occur in a fairly straightforward sequence (although it depends on the source of the signal). For example, a central processing area with directives for voluntary motor movements pass through a final staging area before the execution of an action. This region is the primary motor cortex.

Research on laboratory animals demonstrates that this cortex decides on a course of action that depends on the source of signals it receives before the execution of that action. One source originates in the premotor cortex. Signals in this area initi-ate movements in response to a specific external trigger, such as a visual cue.

The second source arises in the presupplementary motor area, which is stimulated when laboratory animals make the same movements mentioned above, but they do not originate from responses to an external source. The movement instead arises spontaneously; a thought is internally generated through intentional actions. There is an observed rapid rise in electrical signals that build up just before the brain executes these actions. This has led to the notion that the presupplementary motor area harbors some kind of readiness potential, a useful function in generating movement (Figure). 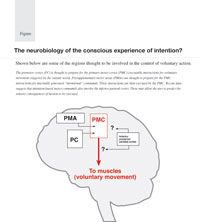 In terms of human behavior, complex human brains have many more research issues to solve than standard laboratory animal research can address. One potential confounder is conceptual. With research of this type, scientists often tell subjects to choose (or not to choose) from a variety of options. Is that voluntary? Hardly. This is like saying, “Okay, it’s time to have some voluntary volitional behavior now,” or like runners at a race who respond to the starting gun. Do volitional actions disappear in these experiments with human subjects? Are these subjects simply reacting to commands to respond, not to respond, or to respond however they want? To test volition, researchers should not control the input. Nevertheless the experimenter must, almost by definition.

Another complexity involves engineering. How does conscious intent to move an arm relate to the actual movement of the arm? This could be partially resolved with electrical stimulation mapping in which surgeons create a map of the brain on conscious patients to understand what tissues need to be avoided during certain manipulations (such as resection). No pain neurons exist in the brain. The patient, immobilized in a stereotactic frame, can be consciously interrogated while the surgery takes place. The surgeon applies a gentle electrical current to the open tissue, talks to the patient about what he or she is experiencing, and makes a map that discerns what areas to avoid during cutting. Working primarily with epileptic patients, the legendary Canadian physician Wilder Penfield first performed these techniques.1

This technique has proved to be of great value in understanding volitional components of motor movement. It was discovered almost 2 decades ago that if one stimulates a specific area of the human presupplemental area, the patient will experience a conscious urge to move.2 This gets around the runner’s starting gun problem mentioned previously. An external electrical stimulator supplies a specific quantity of electricity-and a desire to do something is suddenly generated!

As important and well-characterized as these data are, they hardly explain what causes the presupplemental area to generate the signal in subjects not undergoing surgery. Some research findings answer this question and have led to some intriguing results.3,4

When the inferior posterior parietal cortex was stimulated, the patient experienced an urge to move specific body parts. Stimulating one area caused patients to want to move their arms. Another region, the lips. Another region, the chest. This is similar to what one observes in frontal lobes, except that you are nowhere near the frontal lobes. Recall that this is the associative cortex region (a sensorimotor associative area at that), quite distinct from anything observed in the well-characterized general motor areas of the frontal lobes. Was this simply a remote stimulation?

This result showed that the answer would be no. The parietal cortex urges were qualitatively different from those obtained by stimulating parts of the presupplementary cortex. It is well known that if the presupplementary cortex is stimulated at a low current, the urge to act is acquired. However, if the same region is stimulated at high current, actual movement occurs. That’s not what happened in the parietal cortex. The urge was stimulated at low intensities, but movement was never generated at higher ones. Instead, subjects felt that they had already performed some movement.

This is important. The desire to move did not result from subtle motor contractions that may have been generated by motor regions (an alternative idea that has been put forth as a rational explanation for the results in previous experiments). Parietal stimulation never produces muscle activity, regardless of the intensity. The stimulation of the premotor cortex itself produces large-limb movements in subjects, but never the desire to move the limbs. They usually remain unaware that movement has occurred when these regions are stimulated.

These results suggest the presence of 2 specific aspects of conscious intention (however one defines it). One might be the conscious correlation of preparatory motor commands in the presupplemental cortex region, as is clearly observed in laboratory studies of animals. The other might involve sensory prediction of the consequences of those commands, under the domain of the association cortex region. A portion of conscious intent seems to be a specific class of experiences housed within the parietal lobe.

It appears that the parietal lobe contributes to the conscious experience of intention, at least in regard to motor movement. These results cement 1 more brick onto the great construction project that seeks to define intention. But they hardly hint at the overall building.

Pushing the edge of our understanding into the murky world of association cortex only means that future experiments will be trickier to interpret. Electrical stimulation mapping, as good as it is, is necessarily a blunt instrument that stimulates thousands of neurons simultaneously. Not isolated modules, these regions connect to each other in complex, little-understood ways. That the regions produce different behaviors is an important finding but not a defining one.

How do the frontal and motor aspects of volitional experience differ from the parietal, sensory versions? What factors stimulate the parietal lobes in the first place? What about remote effects?

Questions such as these remain to be answered and are just a few of the many that researchers will face as they attempt to define intentional and conscious experiences.

Penfield W, Erickson TC. Epilepsy and cerebral localization: a study of the mechanism, treatment and prevention of epileptic seizures (Review).

Haggard P. Human volition: towards a neuroscience of will.

Custers R, Aarts H. The unconscious will: how the pursuit of goals operates outside of conscious awareness.