Penis Size: A Consideration of Fantasy and Reality (With Only a Few Puns)

So does penis size matter? What we can see is that the dimensions don't, but the feelings and fantasies do. 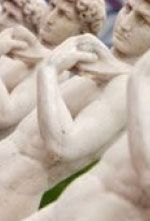 Penis size, a topic that is often spoken about only in whispers or jokes, merits serious discussion. Not only do many men have a great deal of concern about it, but since this concern and the psychodynamic means for understanding it are seldom discussed in professional training, few psychiatrists, psychologists, and other therapists are prepared to help their male patients deal with their worries about this subject. Over the years, I’ve observed that most of my male patients have worried that their penises were “smaller than average” or “too small.”

How should we understand this challenge to statistical common sense? And why do men think women are concerned about their size?

Human concern about the penis is old and universal. Artifacts from around the world feature human forms with exaggerated genitalia. Little boys in all cultures get accustomed to touching themselves early, and if possible, often. Freud was both right and wrong about penis envy. Does it exist? Yes. In women? Occasionally. In men? Almost always. Men worry that some other guy is bigger, and that women care. Men develop fascinations with cigars, pens, cars, trains, baseball bats, knives, guns, and sausages, but not usually with frisbees, soup, pillows, or suitcases. They exhibit themselves and hide themselves, and they make endless anxious locker-room jokes. Men want to be bigger and at the same time often fear being bigger, sensing it to be dangerous. This makes realistic understanding of size surprisingly difficult.

Much of the thought and feeling on this subject is infused with concerns from childhood. In the child’s mind, and therefore on some level in the adult’s, bigger is always better. In Westerns, the bad guy is always older, dressed in darker (non-innocent) clothing, tall in the saddle, and always has a beard or moustache. He is powerful, the father, the antagonist of the beardless youth who tries to win the woman that the older man wrongly holds hostage. I have yet to meet a male patient who didn’t bring forth some present-day version of this perpetual struggle to be as big as his dad; big instead of his dad; bigger than, and with all the advantages of, his dad (or grandfather, uncle, or whomever the most primary male was). Sometimes these strivings are subtle, sometimes they are blatant, and often they are disguised by submissiveness or self-defeat. Frequently they show up as anxiety about attaining the privileges of the adult male, such as having sex, holding a good job, or earning a promotion.

Children make their best efforts, using the means at their disposal (such as fantasy) to right the terrible injustice of being little. They are envious, imperious, and wishful, even as they are also kind and loving. Smart as they are, they have little sense of reality. Plotting to get what the adults have-their partners, money, big bodies and big penises-they expect others to be up to the same tricks as they are. They know from their own fantasy schemes to get the goods from the big adults that it’s dangerous to be big and to have the treasure, because then you are a target. Just as in the Westerns, someone may be gunning for you. So they play defense as well as offense and protect their own precious possessions.

Proclaiming, believing, that what one has is too small and thus not worth stealing is a clever and convenient ploy. “I’m just a child” is a great alibi during childhood, but it’s one that many men unconsciously continue to use, long after it has served to relieve boyhood anxiety. They strike a psychological bargain: they get to keep their equipment, but at the cost of feeling little and hiding what they have. They may feel ashamed and little, but at least they’re safe from attack.

An aspect of this hiding can be discerned in public behavior. At concerts and ball games, women often go to the bathroom in the company of other women. In contrast, many men, without ever discussing it, maintain a secret agreement to go alone, or without anyone they know. Better that no one can glance at their anatomy, take their measure, find them (as they imagine it) shamefully little, or let the evil eye get a dangerous glance at their treasure. To protect themselves from imagined danger, men will sometimes urinate in toilet stalls instead of urinals, collectively sacrificing vast quantities of water to their anxiety.

Some men try to put their safety-by-self-diminishment into reverse. Having protected themselves from predation by insisting they are small (like the Billy Goats Gruff), and feeling ashamed at their presumed smallness, they then want something physical to increase the size they have mentally decreased. Some men’s size worries are magnified by a lasting feeling from boyhood of smallness in relation to their big mothers, who excluded them from private matters with big, adult men; they are then inclined to believe that women may see them as small and continue to refuse them because of it.

The resulting desire for a physical solution to an emotional problem has spawned the widespread penis enlargement industry, an early and no­torious purveyor of Internet spam as well as of ads in the back pages of certain magazines. (Women, of course, do something similar, trying vainly to solve problems of low self-esteem and imaginary defects through the now common ritual mutilations of plastic surgery.)

Ironically, while men are busy imagining that women want them to have bigger penises, the women would prefer that the men be self-confident enough not to be concerned about penis size. I have rarely heard a female patient trouble herself to comment about the size of her partner’s penis, but women care a lot about whether their partners are confident, decent, and can stand up for themselves and others. (Yes, there’s a pun there.) In fact, in the few times I’ve heard a woman venture a thought about the size of her partner’s penis, the more frequent concern was that it would be too big, contributing to a fantasy of injury.

So does penis size matter? What we can see is that the dimensions don’t, but the feelings and fantasies do. Men care about it and will continue to. The past is present. Junior male apes want access to the females possessed by their seniors; David still fights Goliath; Moses continues to oppose Pharaoh; and every day around the world Luke Skywalker takes on Darth Vader with a 3-foot light saber. As long as they love their mothers, boys will be certain that bigger is better. Although the boy remains present in the man, he also grows up. Even so, to move from residual childhood preoccupations to more adult accomplishment, many men need psychoanalytic therapy to help separate childhood fantasy from adult reality. When they are able to transform their childhood efforts t o even the score with the giants into working well in the world and caring about others, they feel more satisfied with themselves, and their partners are happier with them as well.