Glutamate and Psychiatry in 2012-Up, Up and Away!

This article reviews the recent knowledge about glutamate in different psychiatric conditions based on research published in the past year. 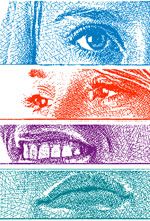 In the past 12 months, there has been substantial progress in our understanding of molecular processes related to the pathogenesis of major psychiatric and substance use disorders, and impressive translation of this knowledge toward developing better treatment. For example, our basic understanding of brain glutamate systems has yielded tremendous advances. Glutamate is the major excitatory neurotransmitter in the brain.1 It is involved in the neuro-circuitry of memory, emotions, and cognition and is implicated in myriad psychiatric conditions, including depression, anxiety, schizophrenia, drug addiction, and neuropsychiatric disorders.

This article reviews the recent knowledge about glutamate in different psychiatric conditions based on research published in the past year.

Stress is an important risk factor in the genesis of anxiety disorder. Animal studies have shown that stress precipitates glutamate release in limbic regions that may in part act to stimulate the hypothalamus-pituitary-adrenal axis and contribute to glucocorticoid-induced neurotoxicity.2 Recent studies have found dendritic remodeling, synaptic spine reductions, glial loss, and possibly volumetric reductions from glutamate excess following stress.1 Therefore, new drugs that target glutamatergic neurotransmission may be promising candidates for pharmacological treatments for patients who have stress-related anxiety disorders.

The monoamine hypothesis for mood disorders has been the dominant model since the 1960s.5 This has been challenged because monoamine antidepressants are only effective in 50% to 60% of depressed patients, and only about 70% respond after 4 acute treatment steps based on STAR*D algorithms.6 There is now evidence that glutamate dysfunction is involved in the limbic and prefrontal circuits of depressed individuals. For example, there is an increase of extracellular glutamate during acute and chronic stress and during depression.1

Animal and human studies have indicated that targeting the glutamate system may hasten onset of action of antidepressant treatment.1 There is a growing interest in ketamine-a nonselective NMDA-R antagonist. Subanesthetic doses appear to enhance the strength of cortical synapses through NMDA-R– and a-amino-3-hydroxy-5-methyl-4-isoxazole propionic acid receptor (AMPAR)-dependent and neurotrophic mechanisms and may rapidly reverse prefrontal cortex–based deficits in depression at the neurocircuitry level. The result may be the amelioration of clinical symptoms.2

Zarate and colleagues7 replicated their previous finding that patients with bipolar depression who received a single ketamine infusion experienced a rapid and robust antidepressant response and a rapid diminution in suicidal ideation. Limitations included a small sample (N = 15) and short duration (2 weeks); also, improvement remained significant over placebo for only 3 days.

A recent review by Covvey and colleagues8 concluded that for depressive symptoms in treatment-resistant depression, ketamine produced rapid reductions in depressive symptoms and had a relatively benign adverse-effect profile. However, the sustainability effect remains unknown. Testing the safety and tolerability of repeated-dose ketamine remains a high priority of future investigations.9

The mesocorticolimbic dopamine system is central to our understanding of addiction. Nonetheless, glutamate is also of interest because it modulates dopamine activity and is involved in the development and maintenance of drug dependence, particularly in reinstatement to drug-seeking behavior.10 Decreasing glutamatergic transmission by modulation of glutamate receptors may be effective in attenuating the reinforcing effects of drugs of abuse and in preventing reinstatement to drug-seeking behavior.11

Murray and colleagues12 looked at the effects of N-acetylcysteine (NAC), a glutamate modulator that acts on the glutamate/cysteine exchanger, on cocaine seeking in the early and late stages of the acquisition and maintenance of cocaine self-administration in rats. NAC dose-dependently decreased the propensity to seek cocaine but had no effect on the reinforcing properties of cocaine. The researchers suggest that NAC can decrease the tendency to relapse and may also help break drug cue–elicited cocaine-seeking habits.

It is interesting to note that NAC was effective in decreasing marijuana use during an 8-week, double-blind, randomized, placebo-controlled trial for treatment-seeking cannabis-dependent adolescents.13 NAC was well tolerated and associated with minimal adverse effects. In contrast, a controlled clinical trial failed to demonstrate an ability of D-cycloserine to boost relapse prevention outcomes when combined with cognitive-behavioral therapy.14 Thus, pharmacological modulation of the glutamate system may prove to be useful in the control of a range of compulsive behaviors.

The finding that noncompetitive NMDA-R antagonists such as phencyclidine and ketamine can elicit the positive, negative, and cognitive symptoms of schizophrenia in healthy individuals gave rise to the hypothesis of impaired NMDA-R functioning in psychosis. A number of compounds licensed for medical conditions, including several NMDA-R and mGluR agents, may have antipsychotic effects, but none has proved overall benefit over risks (adverse effect, tolerability).15

The Cognitive and Negative Symptoms in Schizophrenia Trial (CONSIST) found no beneficial effect of glycine as an add-on treatment in chronic schizophrenia. Nonetheless, given a clear role for glutamate in the neurobiology of psychosis, it remains an active target for drug development.16

In early clinical trials, mGluR5 antagonists have shown evidence of efficacy in treating neurobehavioral symptoms associated with FXS.19 Moreover, acute treatment with mGlu5 inhibitor in the Fmr1 knockout mouse suggests that a comprehensive phenotype correction in FXS is possible with pharmacological intervention starting in young adulthood, after development of the phenotype.20 This glutamate-based therapeutic strategy may have important implications for management of such neuropsychiatric disorders as PD and FXS in the future.

Might targeting glutamate lead to new approved treatments in psychiatry? Understanding the pathophysiology of glutamate systems has yielded tremendous progress, which we hope will translate into novel and exciting neurotherapeutics. Increasing our understanding of biological vulnerability factors such as glutamate function in psychiatric disorders is important, but such advances should be combined with psychosocial interventions to yield optimal outcomes. The future is bright for developing neurotherapeutics based on the brain glutamate systems-so, up, up and away!

5. Schildkraut JJ. The catecholamine hypothesis of affective disorders: a review of supporting evidence. Am J Psychiatry. 1965;122:509-522.

14. Kennedy AP, Gross RE, Whitfield N, et al. A controlled trial of the adjunct use of D-cycloserine to facilitate cognitive behavioral therapy outcomes in a cocaine-dependent population. Addict Behav. 2012;37:900-907.