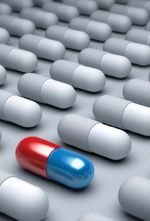 Despite the potential of psychiatric pharmacogenomics to reduce adverse events, optimize drug dosing, and guide treatment decisions, clinicians have been slow to accept the rapidly evolving science, report pharmacogenomics experts.

“A clear role in drug toxicity and efficacy has been established for some gene-drug combinations, yet implementation of pharmacogenomics tests in clinical practice lags behind this knowledge,” commented David Mrazek, MD, and Caryn Lerman, PhD, in a recent JAMA article.1

Two experts at the FDA’s Genomics Group also recently noted, “Despite the potential for pharmacogenomics to improve patient care, we have yet to see a pharmacotherapeutic paradigm shift in which information on a patient’s genetic makeup is used with other patient-specific factors to guide therapy decisions.”2

In an exclusive interview with Psychiatric Times, Mrazek, Professor of Psychiatry and Director of the SC Johnson Genomics of Addictions Program at the Mayo Clinic in Rochester, Minn, explained how pharmacogenomics-the study of how an individual’s DNA affects medication response-might substantially reduce suffering.

For example, the cytochrome P-450 (CYP) 2D6 enzyme is crucial for some of the most widely used psychiatric medications, such as paroxetine, fluoxetine, and venlafaxine; those who are poor metabolizers are vulnerable to adverse-and even lethal-reactions.

Mrazek cited a report by Sallee and colleagues3 about a 9-year-old boy with ADHD, OCD, and Tourette disorder who was treated with a combination of methylphenidate, clonidine, and fluoxetine. A number of symptoms developed, including low-grade fever, inco-ordination, and seizures. Ultimately, the boy went into status epilepticus and died.

“The boy just couldn’t metabolize Prozac, and he had built up very toxic levels before anyone recognized it,” Mrazek said.

Most clinicians now recognize that nausea, vomiting, and headache may be symptomatic of a toxic effect in a patient taking a psychotropic drug. Nevertheless, some patients still die, even when the medication is stopped. This is because some patients have limited metabolic capacity. Clinicians need to realize that “1 in 10 people from European backgrounds are poor metabolizers of this particular drug-metabolizing gene.”

In his book Psychiatric Pharmacogenomics, Mrazek describes 3 additional drug-metabolizing enzyme genes: CYP2C19, CYP2C9, and CYP1A2, along with the norepinephrine transporter gene, dopamine and serotonin transporter genes, and genes involved in coding for the receptors.4

The 14 genes Mrazek discussed in his book are ones for which there was “some kind of consensus that there was a relationship between the variation and the drug response.”

Developing new methodologies to enhance the safety of prescribing psychotropic medications has become an increasingly high priority, according to Mrazek. Safety concerns are highlighted by a series of FDA black box warnings over the past several years.

The FDA, for instance, issued a warning for the HLA-B*1502 variant, associated with the potentially lethal toxic epidermal necrolysis and Stevens-Johnson syndrome in Asian patients treated with carbamazepine. The agency called for screening of patients at risk for the presence of HLA-B*1502 before initiating treatment with the drug.

More recently, the agency pub-lished a list of FDA-approved drugs with pharmacogenomics information in their labels. On that list are 30 drugs or drug combinations used in psychiatry and an additional 4 used in neurology.5

Psychiatrists and other clinicians need “to be comfortable with the philosophy and logic behind pharmacogenomic testing,” Mrazek said. He noted, however, that a knowledge gap exists.

Winner and colleagues6 surveyed psychiatry chief residents in 2008 and found that 15% had received no training in genomics and that another 35% had received only 1 to 3 hours of training. Just under 40% said their residency program did not prepare them to recognize the growing importance of genetic information on pharmacological choices. Lack of faculty with adequate training in genomics was also identified as a barrier.

In addition, many older psychiatrists, Mrazek said, have not kept up with genetics and “are apprehensive about trying to go back and understand the molecular side of genetics.” He recommended CME programs on psychiatric pharmacogenomics to help close the knowledge gap.

Mrazek predicted that it won’t be too long before diagnostic and treatment guidelines for psychiatric disorders recommend pharmacogenomics testing as part of the initial workup, to protect patients from adverse effects and to decrease the time and cost in identifying the right medicines.

Inclusion of pharmacogenomic information in the patient’s EMR can also help ensure that physicians are prompted regarding safety and efficacy considerations when ordering a specific medication, according to Mrazek. On the Mayo Clinic’s EMRs, there is a specific icon that can be selected that brings up every genotype that has been ordered for a particular patient, regardless of whether a psychiatrist or a cardiologist ordered it, he said.

In their JAMA article, Mrazek and coauthor Lerman, Professor of Psychology in the Department of Psychiatry at the University of Pennsylvania, urged that pragmatic clinical trials (PCTs) be considered, rather than just exclusive reliance on randomized controlled trials.

“Once initial efficacy has been documented, a PCT could be part of the validation pathway for implementation of pharmacogenomic tests,” they wrote.

“I think the way to get the best quality evidence is to begin the study with groups of patients who are genotyped at the front end, so we know who is a slow metabolizer and who is likely to respond to one drug or not,” Mrazek said. “These studies are just beginning to be done.”

Historically, Mrazek said, the biggest barrier to the use of pharmacogeno-mic tests has been their costs. Now, however, “the cost is coming down, and the new genotyping technologies will mean that in 5 years, costs will not be a barrier.”

Laboratory-developed tests, including genetic tests, must comply with the Clinical Laboratory Improvement Amendments (CLIA) regulations. However, the FDA recently announced its intention to begin risk-based oversight of laboratory-developed tests. In addition, the NIH last year announced development of a Genetic Testing Registry (GTR), with a projected launch early in 2012. Plans call for the GTR to provide access to information about genetic tests for inherited and somatic genetic variations, including arrays, multiplex panels, and pharmacogenetics. Test-specific information will be based on voluntary data submissions by test developers and manufacturers.

One of the first genotyping tests used in psychiatry was Roche’s AmpliChip CYP450 test, which received FDA clearance in December 2004. The assay, available at all of the major reference laboratories in the United States, such as LabCorp and Quest Diagnostics, distinguishes 29 known polymorphisms in the CYP2D6 gene, including gene duplication and gene deletion, as well as 2 major polymorphisms in the CYP2C19 gene.

The Mayo Medical Laboratories also does psychiatric pharmacogenomics testing and reports it can do multiple drug metabolism genotype tests on a single specimen, including CYP2D6, CYP2C9,CYP2C19, CYP1A2, serotonin receptor genotype, and serotonin transporter genotype. While most laboratories require the submission of a blood specimen from which DNA is extracted, AssureRx Health Inc’s GeneSightRx extracts DNA from a cheek swab sample collected in the psychiatrist’s office and Genomind’s Genecept Assay Kit extracts DNA from a saliva sample.

GeneSightRx analyzes variations in CYP2D6, CYP2C19, CYP2C9, and CYP1A2 genes, as well as the serotonin transporter gene, SLC6A4, and the serotonin 2A receptor gene, 5HTR2A. The multi-gene test result is accompanied by an interpretative report and analysis of possible psychotropic drugs that can be used or avoided. (Mrazek has served as scientific advisor for the company).

The Genecept Assay includes both CYP2D6 and CYP2C19, as well as the SLC6A4, gated calcium channel, dopamine receptor (DRD2), catechol-O-methyltransferase (COMT), and methylenetetrahydrofolate reductase (MTHFR). Genomind notes on its Web site that it has psychopharmacologists available to discuss test results with treating clinicians.

A pilot program, Pharmacogenetic-Directed Prescribing of Psychotropic Medications (PREDICT PSYMEDS) is being conducted to evaluate antidepressant and antipsychotic drug adherence and medical care use by some 2000 Medco Health Solutions members after they are genotyped with a multi-gene pharmacogenetic profile test. Participants’ pharmacy and medical claims will be followed for a 1-year period post-testing. Patients who receive the test will be compared with matched controls from Medco’s longitudinal pharmacy and medical claims databases.

On an individual patient level, Mrazek also sees adherence changes. In one instance, after he conducted Grand Rounds on pharmacogenomics, Mrazek received an e-mail from someone who had heard him. The individual described his long struggle with depression and treatment. Trials with 3 different antidepressants only exacerbated it, so he chose not to take medication and sunk into an “ugly swamp of depression.” As a last resort, he asked for a genetic profile. The report indicated that only 2 antidepressants were suitable. Working with his psychiatrist, the patient started taking 1 of the drugs and experienced a marked improvement in his symptoms.

“Do you remember the opening scenes from The Wizard of Oz?” the individual wrote Mrazek. “The film begins in black-and-white and suddenly is transformed into brilliant color. That change is less dramatic than the change in my life.”

Articles in this issue
In Memoriam: Daniel W. Shuman, JD: A Gift for Collaboration
Empty Words in Psychiatric Records: Where Has Clinical Narrative Gone?
The Debate Over DSM-5: We Invite Your Views
Brother Dog
What People Want vs What Psychiatrists Can Offer: The Fantasy and the Reality
A Synapse Darkly: Psychiatry at a Critical Juncture
Sexual Minority Identity Development
Happy 70th Birthday, Dad
Welcome to Our Editorial Board!
Meditation on Manic-Depressive Illness
Psychiatric Pharmacogenomics: Research Directions
Psychiatric Pharmacogenomics
Medicare to Pay for Depression Screening in Primary Care
Psychosomatic Symptoms in Children With Chronic Medical Illness
Psychodermatology: When the Mind and Skin Interact
Related Videos
Related Content