Psychosis and Suicidality in Adolescents

Information from studies on adolescents with psychosis and a review of the evidence about the risk of suicide and suicidal behavior in this patient population.

TABLE 1: Risk of suicidality in adolescents with psychosis 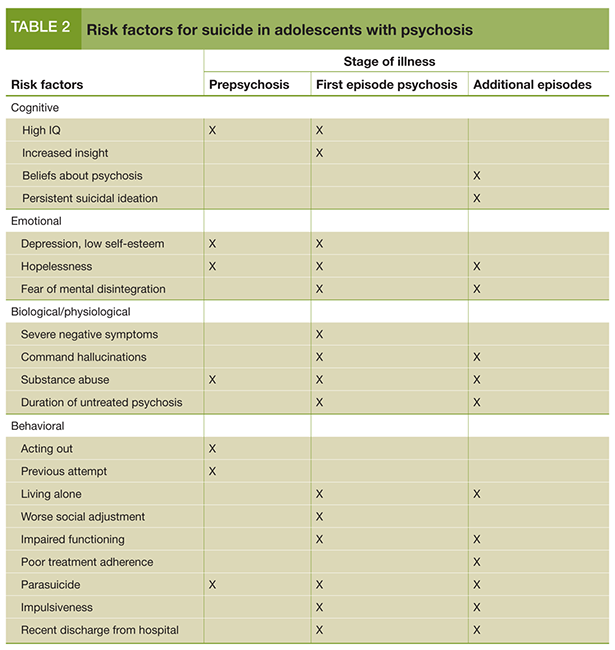 TABLE 2: Risk factors for suicide in adolescents with psychosis

The risk of suicide is high in patients with psychosis: 20% to 40% will attempt suicide during their lifetime, and about 8% to 10% will die by suicide.1 The risk is higher among adolescents, especially for those with first episode psychosis (FEP).1-3

In this article, we review information from studies on adolescents with psychosis and discuss the evidence about the risk of suicide and suicidal behavior in this patient population.

Important differences have been reported in the rates of suicide attempts (10% to 28%) and suicidal ideation and behavior in patients with FEP. During the first 6 months after the onset of psychotic symptoms regardless of age, patients may be at greatest risk for suicide. Up to 26% of patients with schizophrenia have attempted suicide by the time they are admitted to the psychiatric hospital for the first time. A Norwegian group compiled FEP profiles of 43 adolescents and 189 adults.7 A significantly higher percentage of the adolescents disclosed suicidal plans or behavior (11, or 26%, vs 22, or 12%, of the adults).

In some patients, the first episode of psychosis can be triggered by substance abuse. Hambrecht and HÃ¤fner8 reported the frequency of alcohol abuse in FEP was double that of the general population. Increases in the use of cannabis of up to 70% have also been reported in patients with FEP.9

In a 24-month follow-up study of 110 patients with FEP, investigators reported suicidal behavior and depressive symptoms at admission as the key predictors of suicide by 24 months.1 In this group, 12.4% of patients with psychosis attempted suicide in the first 2 years after the diagnosis: the first year after the diagnosis was the highest-risk period. The severity of the psychotic symptoms was not associated with suicidal behavior in this sample.

Some risk factors for suicidal behavior in adolescents with psychosis are presented in Table 2. Risks in the prepsychosis stage include a high IQ; depression, low self-esteem, and hopelessness; acting out behavior; and a previous suicide attempt. In adolescents who attempt suicide, there is often a higher prevalence of psychiatric disorders in the patient or family as well as reports of previous self-injurious behaviors. Longer duration of the untreated psychosis has been reported as an important predictor of suicide attempts.

At the time of the FEP, increased insight, fear of mental disintegration, severe negative symptoms, command hallucinations, substance abuse, living alone, and worse social adjustment and impaired functioning may be evident. Other important predictors of suicidality in FEP patients are depressive symptoms, higher premorbid IQ, and negative beliefs about psychosis.

After the first psychotic episode, risk factors include having persistent beliefs about psychosis, longer duration of untreated psychotic symptoms, poor adherence to treatment, and parasuicidal impulses. These can all be indicative of increased risk of suicide. Interestingly, lower cognitive abilities may be a protective factor, since high IQ relates to insight, which can lead to hopelessness in adolescents with FEP.2

The considerations about insight are important, since patients with higher insight are more likely to be treatment-adherent, have lower symptom levels, and have better work and social performance. However, they are more aware of the changes in their lives and are more likely to have depressive symptoms. Hopelessness appears to lead to worse scores on quality of life scales, especially in those patients who have negative beliefs about schizophrenia. Hopelessness during FEP is an indicator of poor short-term outcome and increases the probability of a suicide attempt in the first year after diagnosis of schizophrenia.

The role of stigma

Stigma appears to play a key role in delaying treatment. Patients may make multiple contacts with health care professionals (averaging nearly 5 separate professional contacts) before seriously considering medication. Moreover, stigma influences patient behavior: mental illness is sometimes perceived as a nontreatable illness. Patients may be reluctant to ask for help, believing that this illness could ruin their lives forever.10 The role of stigma may be even higher in youths because they are highly insecure and misinformed about the consequences of delayed treatment.

This may be especially true for patients with FEP. Jackson and colleagues11 called this process “derailing” of youth: adolescents start losing all their social supports, they are unable to build their own identity, and they feel hopeless about the prognosis. Reducing the duration of untreated psychosis can improve the quality of life for youths with schizophrenia.

Many measures or combinations of measures have been used in studies of suicidality in adolescents with psychosis. A very brief way of measuring suicidal ideation is to ask whether the person has ever (or in the past several months) thought about, planned, or attempted to commit suicide. Brief, well-validated measures include the Patient Health Questionnaire-2, the Youth Risk Behavior Survey that contains questions about suicide, and the Paykel Suicide Scale that consists of 3 questions.

Questionnaires that are somewhat longer include the Suicide Risk Scale (26 yes/no questions) and the Brief Psychiatric Rating Scale for children that includes questions about suicidality. The Columbia Suicide Severity Rating Scale (C-SSRS) is a semi-structured, rater-based interview used to assess severity and frequency of suicidal ideation and behaviors; it can be self-administered using a computer (electronic C-SSRS). In a study of 35,224 children, the average time to answer the questions was 3.8 minutes.12 When suicide is an issue, additional questions are indicated-in this case, it took an average of 7.7 minutes to complete.

Following assessment for suicide, youths and their families may be able to take advantage of interventions that have been shown to be helpful. Three types of interventions have demonstrated significant efficacy in clinical trials: antipsychotic medications; family education and support, including the Early Psychosis Prevention and Intervention Centre early intervention program13; and Assertive Community Treatment.14

The evidence for specific interventions to prevent suicide in youths with schizophrenia indicates that suicide rates are reduced in patients who participate in early intervention programs. Family engagement early in the process and family education to recognize the importance of treatment and the need for close follow-up are important supports to other aspects of treatment.

The psychotherapist plays an active role in reinforcing the importance of medication and teaching the patient new strategies to cope with stress. Importance is placed on the team’s engaging with the patient and family to decrease the duration of untreated psychosis: the longer the duration, the less the patient will be able to use coping mechanisms and the more likely that he or she will withdraw more from the social network and family.

John is 19 years old with a history of depressive symptoms that began when he was 13. He was discharged from the inpatient psychiatric unit 2 weeks ago after his third suicide attempt in 3 years.

John’s grades started to decline in 8th grade. At age 13, symptoms of inattention and difficulty in concentrating indicated a diagnosis of ADHD, and treatment with a stimulant medication was started. John felt that the stimulant gave him partial relief, and he took it for 1 year. But after a year, he reported that “it made me feel different so I stop taking it.”

After his 14th birthday, John became reclusive and no longer wanted to participate in activities that he had previously enjoyed. He became suspicious and felt that people were looking at him differently. He started smoking cannabis regularly. His paranoid ideas became worse, and he started carrying a knife to school “for protection.”

John first attempted suicide when his mother remarried and his brother was born. He was admitted to the hospital for 14 days and was treated with an atypical antipsychotic. By the time he was discharged, the paranoid symptoms had improved. He was treatment-adherent for the next year. However, a “new girlfriend” discouraged him from taking “strong medication.” He stopped taking his meds and relapsed. He attempted to cut his veins and was admitted to the unit for 7 days. After discharge, he went for intensive outpatient treatment for 3 weeks. Once the symptoms improved, John decided to stop his meds, which resulted in 2 suicide attempts within 1 month.

Because his symptoms had improved in the past, John still does not believe that he has schizophrenia.

This case illustrates that patients with FEP do respond well to treatment, yet the engagement of the patient and the family is key in the treatment of this population. Paradoxically, a risk factor for continuing treatment adherence is improvement of the psychotic symptoms, since after the symptoms improved, the patient felt he did not need the medication and became suicidal twice. Keep in mind the high risk of suicide for adolescents with schizophrenia.

Dr Falcone is Assistant Professor in the departments of psychiatry and neurology, Neurological Institute, Cleveland Clinic Foundation; Dr Timmons-Mitchell is Senior Research Associate at the Begun Center for Violence Prevention, Research and Education at the Jack, Joseph and Morton Mandel School of Applied Social Sciences at Case Western Reserve University, Cleveland. They report no conflicts of interest concerning the subject matter of this article.