Much could be gained if an agreed minimum set of appropriate and important outcomes was measured and reported in all clinical trials in a particular area. 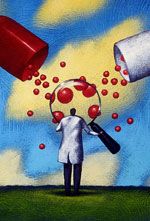 Trials of clinical interventions for schizophrenia should be more “collaborative, pragmatic, and patient-centered,” according to a review published in the February Schizophrenia Bulletin.1

Jose Miyar and Clive Adams, University of Nottingham, United Kingdom, came to their view through a wide-angle assessment of 10,000 controlled trials conducted in the past 60 years. They suggest that the use of fewer, but standardized, scales to measure outcomes in larger study populations, through multisite collaboration, would have “greater clinical utility and direct value to people with the illness and their families or carers.”

In their analysis of the first 10,000 trials in the Cochrane Schizophrenia Group Register, for which Adams is a coordinating editor, the reviewers characterized most as small (median study population of 60). Many employed new and often nonvalidated outcome scales (2194 different scales, with every fifth trial introducing a new rating instrument).

“Although the trial-to-new-scale ratio has declined,” the reviewers remarked, “we get no impression that it is as a result of exhaustion of the subspecialty to invent and reinvent new scales.”

Miyar and Adams also found that single trials have increasingly been used as a basis for multiple reports, noting that one trial yielded 122 separate “full articles.” While acknowledging that separate reports may be necessary to present complex data sets, to separate the discussion of study protocol from results, or to present follow-up data, the reviewers nevertheless fault what they take to be excessive reporting. Too many reports, they argue, can make it difficult to identify which originate from which trial; can make it appear that there are more data than the trial produced; and can separate and highlight favorable findings from a context of less favorable outcomes.

In addition to advocating larger trials with fewer reports and selected outcome measure instruments, Miyar and Adams suggest that the measures could be selected through collaborative initiatives to determine standardized sets of outcomes. They offer an example in the UK of the COMET (Core Outcome Measures in Effectiveness Trials) initiative.2 In that program, the organizers do not preclude the use of unique measures in separate studies. They propose that a “core outcome set” could be evaluated across studies to facilitate results being compared, contrasted, and possibly combined for meta-analysis.