Treatment for Methamphetamine Dependence: Where Do We Stand? Current Knowledge and Future Treatment Targets

Although valiant efforts have been made to reduce access to the chemical precursors of methamphetamine, it is likely that methamphetamine will remain accessible and inexpensive, and costs associated with increased use will continue to rise. 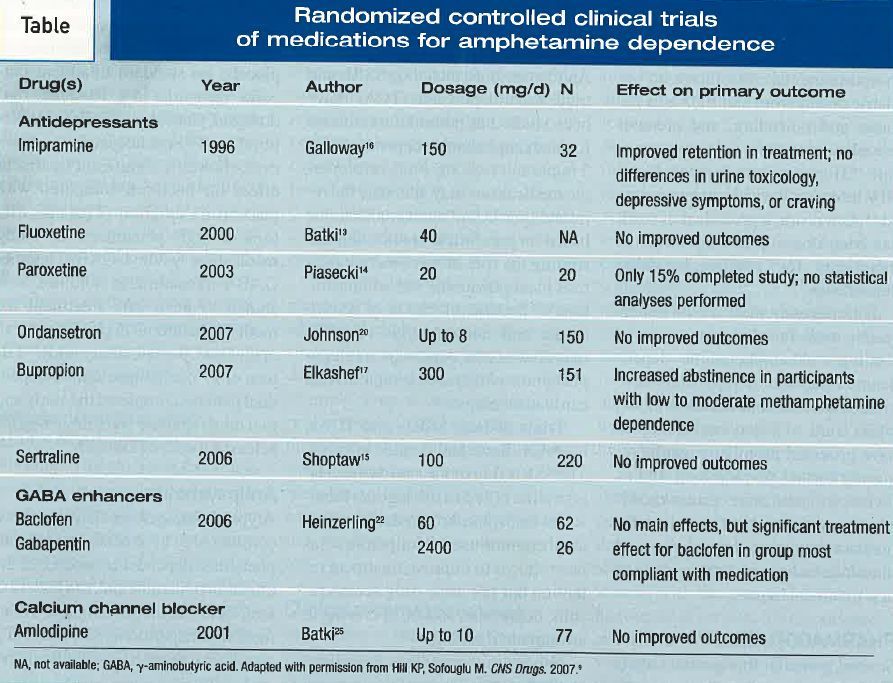 Significant public health effects resulting from methamphetamine use underscore the need for effective treatment. Synthesis of methamphetamine in homemade laboratories has resulted in environmental costs, increased pediatric deaths from and ED visits for burns and poisoning, and prenatal complications from in utero exposure.4-6 Higher rates of hepatitis C and HIV infection have also been reported.7,8 As a result, a great deal of work has been done to develop effective treatments for methamphetamine dependence.9

Unfortunately, there are still few effective tools for clinicians to use in treating methamphetamine dependence. Pharmacotherapy trials have yielded inconsistent results thus far, while trials of behavioral therapies have provided promising results requiring further development. In this review, we summarize current knowledge from studies about treatments for methamphetamine dependence and introduce techniques to help uncover new treatment targets.

Several potential therapeutic targets for the treatment of amphetamine dependence have been identified in studies of preclinical models of addiction.9 Medications acting on dopamine, g-aminobutyric acid (GABA), glutamate, cannabinoid, nicotinic, and opioid receptors have produced findings warranting further study, but the resulting clinical studies have yet to produce reliable treatments.

The positive findings seen in preclinical studies have not, for the most part, been reproduced in humans. Randomized controlled trials (Table) and open-label studies of several classes of medications have generated inconclusive results. However, positive findings, although seen in only a few of these trials, provide hope for the eventual identification of a medication for methamphetamine dependence.

Antidepressants, including SSRIs and tricyclic antidepressants (TCAs), have been studied as potential treatments for methamphetamine dependence for 2 important reasons. First, serotonergic medications may attenuate the reinforcing effects of methamphetamine based on preclinical studies demonstrating the role of serotonergic neurons in amphetamine self-administration.10,11 Second, blockade of seroto- nergic and noradrenergic reuptake may alleviate the depressive methamphetamine withdrawal symptoms that can lead to relapse.12

Trials of both SSRIs and TCAs, however, have had limited success. The SSRIs fluoxetine, paroxetine, and sertraline failed to distinguish themselves from placebo in reducing methamphetamine use.13-15 Imipramine has been shown to improve treatment retention but not urine drug screen results, depression scores, or craving in an outpatient setting.16

Other antidepressants have been studied as well. In a promising recent study, Elkashef and colleagues17 showed that bupropion, a dopamine and norepinephrine reuptake inhibitor, may be effective as a treatment for methamphetamine dependence in at least a subgroup of men who are low to moderate users, increasing the number of weeks of methamphetamine-free urine drug screens.17 Amineptine, a dopamine reuptake inhibitor available in Europe that has mild stimulant properties and mirtazapine, a serotonin 5HT2 blocker, have shown promise as treatments for methamphetamine withdrawal symptoms.18-21

GABAergic agents may also be useful in the treatment of methamphetamine dependence. Neither gabapentin, a GABA-transaminase inhibitor, nor baclofen, a GABAB agonist, produced significant differences relative to placebo on standard treatment outcome measures in a 16-week, randomized, placebo-controlled, double-blind trial.22 Post hoc analyses, how- ever, showed a significant treatment effect for baclofen compared with placebo in a subgroup of patients who took a high percentage of study medication. g-Vinyl-GABA, another GABA-transaminase inhibitor, was shown to be a safe treatment for methamphetamine dependence in an open-label, 9-week safety study.23 Fifteen of 27 methamphetamine-dependent patients completed the study and two thirds or more were drug-free for at least 4 weeks of the study.

Atypical antipsychotics have also been considered as treatments for methamphetamine dependence because of the effects of dopamine and, to a lesser extent, 5HT on amphetamines. Treatment with risperidone, a D2 and 5HT2A antagonist, resulted in significant reductions in episodes of methamphet-amine use and psychiatric symptoms in a 4-week, open-label trial.24

Preclinical studies demonstrating the ability of calcium channel blockers to suppress the rewarding effects of amphetamines have led to the study of this class of medications in humans. In a double-blind, randomized, placebo-controlled trial, a calcium channel blocker, amlodipine, failed to distinguish itself from placebo on measures of methamphetamine use, depressive symptoms, and craving.25

Modafinil, a wakefulness-promoting agent with effects similar to those of amphetamines, was studied in a small open-label trial as a treatment for methamphetamine withdrawal. Treatment with modafinil resulted in decreased subjective and observer-reported withdrawal severity compared with treatment as usual, with the modafinil group reporting less hypersomnia, fewer nighttime awakenings, and deeper sleep than the control group.21

Thus far, trials of psychotherapy for methamphetamine dependence have produced better results than trials of pharmacotherapy. Both cognitive-behavioral therapy (CBT) and contingency management have been shown to reduce methamphetamine use. CBT involves examining learning processes in order to reduce methamphet-amine use; a patient benefiting from CBT would become skilled at recognizing situations associated with use, avoiding them when possible, and coping with them when necessary.

Contingency management provides tangible incentives, such as money or prizes, based on objective measures of drug abstinence. Rawson and colleagues26 included CBT as part of the Matrix Model, a 4-month, manualized, intensive outpatient therapy that combines CBT, psychoeducation, a 12-step program, and positive reinforcement for behavioral change and treatment compliance.26 In a multicenter clinical trial of 978 methamphetamine-dependent individuals, it proved more effective as a 16-week treatment for methamphetamine dependence than standard treatments, increasing treatment retention, the number of methamphetamine-free urine drug screens, and periods of abstinence. Although improvements seen using the Matrix Model did not persist at discharge or at 6 months after admission, this important study demonstrated the efficacy of an intensive, multifaceted, structured treatment program for methamphetamine dependence.

Ms A, a 28-year-old married mother of 2 with a history of depression, was brought to the ED by her mother for worsening depressive symptoms and passive suicidal ideation in the context of 6 months of near-daily methamphetamine use. She reported drinking 4 or 5 drinks 2 or 3 times a week. She stopped smoking methamphetamine a week ago and had not ventured outside of her home since.

Her mother visited her the day before bringing her in to the ED and was alarmed to find Ms A disheveled, markedly less energetic than usual, anxious with paranoia about the neighbors' interest in her activities, and lamenting her current living situation to the point where she made statements about not wanting to live. Such behavior was out of character for Ms A. She had no history of psychiatric hospitalizations or suicidal ideation. Ms A had stopped taking the antidepressant prescribed 8 months earlier by her primary care physician.

Ms A was seen by the consulting psychiatrist in the ED and, after an unremarkable medical workup she was admitted to the psychiatric unit for safety and stabilization. After a brief hospitalization during which the antidepressant was restarted and an outpatient treatment plan was constructed, she was discharged home. No medication to treat methamphetamine dependence was added.

She began an intensive outpatient program with a dual diagnosis focus that met 3 times a week, with the understanding that she would be referred to a psychiatrist and a therapist at the end of the program for follow-up.

This case vignette illustrates some common features of patients presenting with methamphetamine dependence. Comorbidities are often present, with psychiatric comorbidites prominent throughout the addiction, and physical problems developing with persistent methamphetamine use. Before becoming dependent on methamphetamines, Ms A had a history of depressive symptoms, anxiety, and paranoia.

Pharmacogenetics may be useful in the development of new therapies for methamphetamine dependence by helping to individualize treatments. Pharmacogenetic studies are designed primarily in 2 ways.31,32 First, new treatment targets, such as particular neurotransmitter systems, could be identified. Second, pharmacogenetic studies could increase the effectiveness of medications currently in use, either by describing subgroups of patients more likely to respond to a given medication or by providing improved dosing recommendations.

With several classes of medications having been investigated as treatments for methamphetamine dependence, it seems unlikely at this point that a single medication will be both effective and safe for most patients. Thus, further work on the development of methods to predict treatment response, using tools such as pharmacogenetic studies, is critical.

The scope of the methamphetamine problem and the complexities of addiction neurobiology make the pursuit of new ideas imperative. Research on pharmacogenetics appears to be a promising new approach that may advance the treatment of amphetamine dependence. Genotypic information may allow clinicians to tailor treatment to each individual by considering polymorphisms that may affect treatment response. New biological treatments and pharmacogenetic information may become integral components of successful treatment plans for amphetamine dependence.

Drugs mentioned in this article

Dr Hill is a fellow in addiction psychiatry in the department of psychiatry at Massachusetts General Hospital, Boston, and at McLean Hospital in Belmont, Mass. The author reports that he has no conflicts of interest concerning the subject matter of this article.