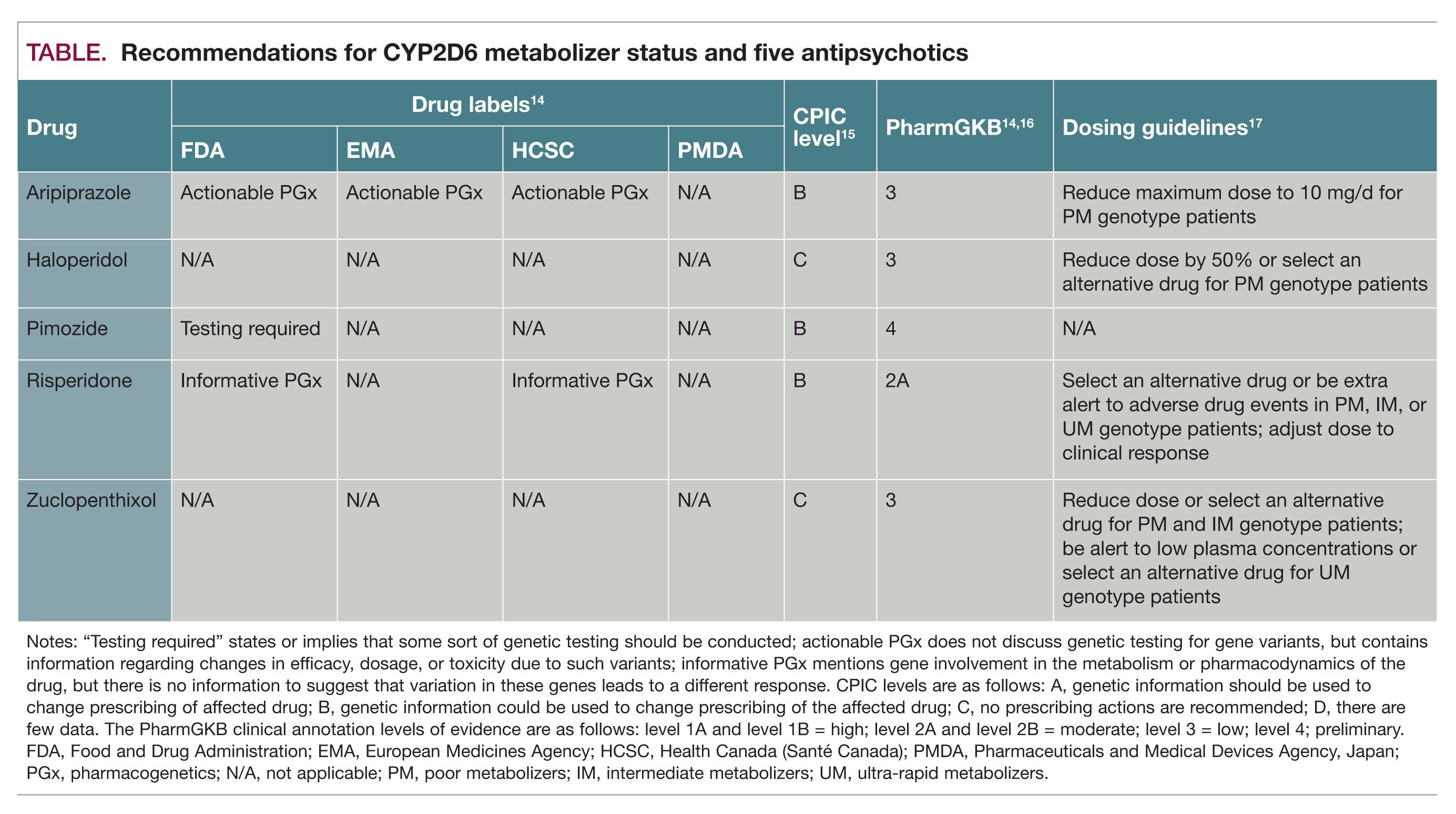 The term “pharmacogenetics (PGx)” was first coined in 1959 with the aim of identifying clinically meaningful genetic predictors of responses to drug treatments and their adverse effects. PGx addresses the limitations of the traditional non-biomarker based “trial-and-error” procedure in selecting psychotropic drugs for patients with psychiatric disorders, including schizophrenia. A combination of pharmacokinetics and pharmacodynamics underlie interindividual differences in drug responses and adverse effects; therefore, PGx focuses on genetic variants involved in pharmacokinetics and pharmacodynamics (Table).

Numerous genetic variants associated with antipsychotic responses and adverse effects in the treatment of schizophrenia have been identified. Based on such genetic information, specific recommendations for treatment with psychotropic drugs, including antipsychotics, have been proposed for clinical practice.

Most antipsychotics are metabolized by cytochrome P450 (CYP) enzymes, (primarily CYP1A2, CYP2D6, and CYP3A4), while other CYP enzymes such as CYP3A5 and CYP2C19 are involved in the metabolism of only a few antipsychotics. The genes encoding these CYP enzymes are polymorphic, resulting in interindividual differences in antipsychotic metabolic abilities.

Four classes of CYP metabolizer profiles have been established according to the multiallelic nature of the CYP enzyme genetic construct: poor, intermediate, normal (extensive), and ultra-rapid metabolizers. Most of the currently available clinical recommendations are based on gene variants that affect CYP enzyme activity.

Based on the CYP2D6 phenotype, the FDA provides information on PGx biomarkers in the drug labeling for nine antipsychotics (aripiprazole, aripiprazole lauroxil, brexpiprazole, clozapine, iloperidone, perphenazine, pimozide, risperidone, and thioridazine). For seven of these nine anti psychotics (aripiprazole, aripiprazole lauroxil, brexpiprazole, clozapine, iloperidone, pimozide, and thioridazine), dose adjustment recommendations are provided for individuals identified as CYP2D6 poor metabolizer. For example, it is recommended to administer half of the usual dose of aripiprazole to patients who are known to be CYP2D6 poor metabolizers because at standard doses the risk of adverse effects is increased with higher drug plasma levels.

Using these resources, Bousman and colleagues1 summarized the current gene-drug interaction information and proposed a minimum testing panel that can serve as a primer for clinical implementation. A total of 448 gene-drug interactions were identified in psychiatry: only 31 (7%) of them satisfied the criteria for the highest level of evidence from PharmGKB (level 1A or 1B), drug labels (testing recommended or required), and clinical guidelines (Clinical Pharmacogenetics Implementation Consortium [CPIC] or Royal Dutch Association for the Advancement of Pharmacy-Pharmacogenetics Working Group [DPWG]). Among those, with the highest level of evidence, 59% involved the CYP2D6/CYP2C19 genes and antidepressant medications (eg, SSRIs and tricyclic antidepressants).

Based on the gene-drug interaction evidence, a minimum PGx testing panel for psychiatry was proposed, in which 16 variant alleles within the CYP2C9, CYP2C19, CYP2D6, HLA-A, and HLA-B genes were included.

This proposed panel is clinically relevant; however, readers should consider certain limitations, including:

1)The proposed panel does not address gene-gene interactions.

3)PGx testing should be used as a support tool, along with other information (eg, age, sex, ethnicity, and concomitant medications), and should be applied in line with other clinical treatment guidelines. While recommendations exist on how to use pharmacokinetics variants for some antipsychotics, no pharmacodynamics gene variants for antipsychotics have been proposed for clinical practice to date.

A number of commercial PGx testing tools including pharmacodynamics gene variants are being offered by several commercial companies for use in clinical practice. A recent survey evaluated physicians’ opinions of PGx testing and their experiences using such tests for prescribing psychotropics through the The Individualized Medicine: Pharmacogenetic Assessment and Clinical Treatment (IMPACT) study.2 Of the 168 clinicians surveyed, 80% believed that PGx testing will become a common standard in psychiatric drug treatment; moreover, these responders were satisfied or very satisfied with the genetic information provided. These findings indicate the feasibility and suggested clinical utility of PGx testing.

However, further investigation focusing on the clinical validity and efficacy of single and combinatorial PGx testing for antipsychotic treatment responses is warranted. Currently, some randomized controlled trials evaluating the clinical utility of PGx testing on antipsychotics in patients with schizophrenia are underway (eg, NCT02573168 and NCT02566057), which should contribute to important advances in this field.

Precautions for implementation of PGx in clinical practice

While PGx testing, is promising in the treatment of schizophrenia, certain limitations should be considered when clinicians rely on PGx tests without knowing their limitations. For example, a clinical case report published in the American Journal of Psychiatry provided a warning regarding the potential warrant of implementation of PGx testing in clinical practice.4 It described a male patient with treatment-resistant schizophrenia, aged 25 years, who showed rapid improvement following clozapine administration despite the fact that the PGx test used for the patient did not recommend clozapine for his treatment. He was judged to be a poor responder to clozapine based on the assessment of several genetic variants, including the DRD2, UGT2B15, CYP2C19, CYP2D6, HLA-B15.02, HTR2C, and MTHFR genes.

However, it should be noted that none of these genes reached Level 1A or 1B based on PharmGKB evaluations. Thus, most of the genetic information collected in this case was of limited use regarding prediction of clozapine response while other clinical factors were not considered. Consequently, PGx testing should be seen as a companion decision-support tool, under consideration of all available individual clinical and demographic information available, and not be interpreted as an alternative or substitute to protocol-based care for clinicians in their attempt to optimize pharmacological treatment.

That availability of commercial PGx tests is increasing at a rapid pace. However, it is also important to consider that tests are not standardized for gene and alleles and the interpretation is therefore inconsistent across the available PGx tests. Consistent with this notion, a recent study reported on the level of agreement in psychotropic medication recommendations across four PGx tests (CNSDose®, Genecept®, GeneSight®, and Neuropharmagen®).5 The agreement was generally modest (eg, antidepressants, 56%; anxiolytics/hypnotics, 56%; antipsychotics, 55%), which indicates that PGx tests are not interchangeable and that standardization across these tests is warranted. Taken together, these findings reflect the need for further standardization of genetic-based phenotyping across PGx tests.

Other findings from research that focused on antipsychotic-induced weight suggest consistent results for several genes implicated in appetite/satiety regulation.9 Our group is currently developing a multi-gene panel to assess individual risk of antipsychotic-induced weight gain, and the preliminary results have been promising.10 Nevertheless, further research is needed to apply recommendations based on pharmacodynamic variants for antipsychotics to clinical practice. Notably, polygenic risk scores, which represent the total number of risk alleles carried by an individual, weighted by the effect size from the genome-wide association studies, have been suggested to be associated with antipsychotic treatment response in patients with schizophrenia.11,12

However, to date, these PGx markers for antipsychotic response and adverse effects are not sufficiently validated to be used in clinical practice yet. Nevertheless, given the rapid advance in the genomic field, future research will find clinically actionable PGx markers to predict antipsychotic response and adverse effects by incorporating identified genetic variants and non-genetic factors.

With advancements in the available technology and applied methods, including genome-wide association studies and targeted gene approaches, a number of new gene variants associated with antipsychotic responses and adverse effects have been identified and may be associated with clinical efficacy to predict clinical phenotypes.6,7 Additional well-designed randomized controlled trials with large sample sizes of patients from a variety of ethnicity groups, standardized clinical PGx guidelines, and increased awareness of the benefit and limitations of PGx will be needed to implement fully in clinical practice.

Dr Yoshida is a Postdoctoral Research Fellow, Centre for Addiction and Mental Health, Toronto, ON, Canada, and a Psychiatrist, Department of Neuropsychiatry, Keio University School of Medicine, Tokyo, Japan; Dr MÃ¼ller is Head, Pharmacogenetics Research Clinic, Centre for Addiction and Mental Health, and Professor, Department of Psychiatry, University of Toronto, ON. The authors report no conflicts of interest concerning the subject matter of this article. 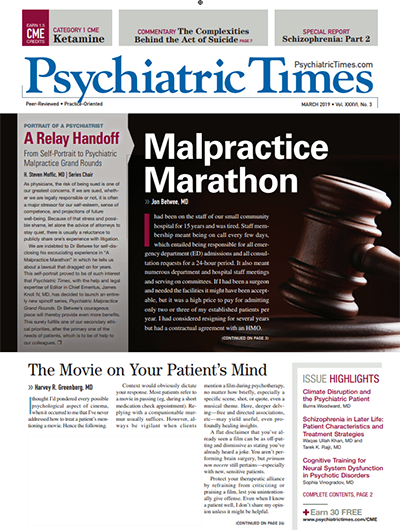 An Invitation: Psychiatric Malpractice Grand Rounds
Using Pharmacogenetics in Making Treatment Decisions for Schizophrenia
Schizophrenia in Later Life: Patient Characteristics and Treatment Strategies
Cognitive Training for Neural System Dysfunction in Psychotic Disorders
Resilient: How to Grow an Unshakable Core of Calm, Strength, and Happiness
THE QUIZ: Chronic Pain and Traumatic Brain Injuries
Climate Disruption and the Psychiatric Patient
Looking at the Past and Forward to the Future
The Movie on Your Patient’s Mind
The Complexities Behind the Act of Suicide
Ketamine for Stress-Related Psychopathology and Suicidality: A Brief Update
Overheard Conversation, ICU
Duty of Care and Informed Consent
Cariprazine May Decrease Substance Abuse in Patients With Bipolar I Disorder
Portrait of a Psychiatrist: A Relay Handoff
Related Videos
Related Content