It’s been tornados, volcanoes, epidemics, and more. Now we have COVID-19; is the coronavirus here to stay? 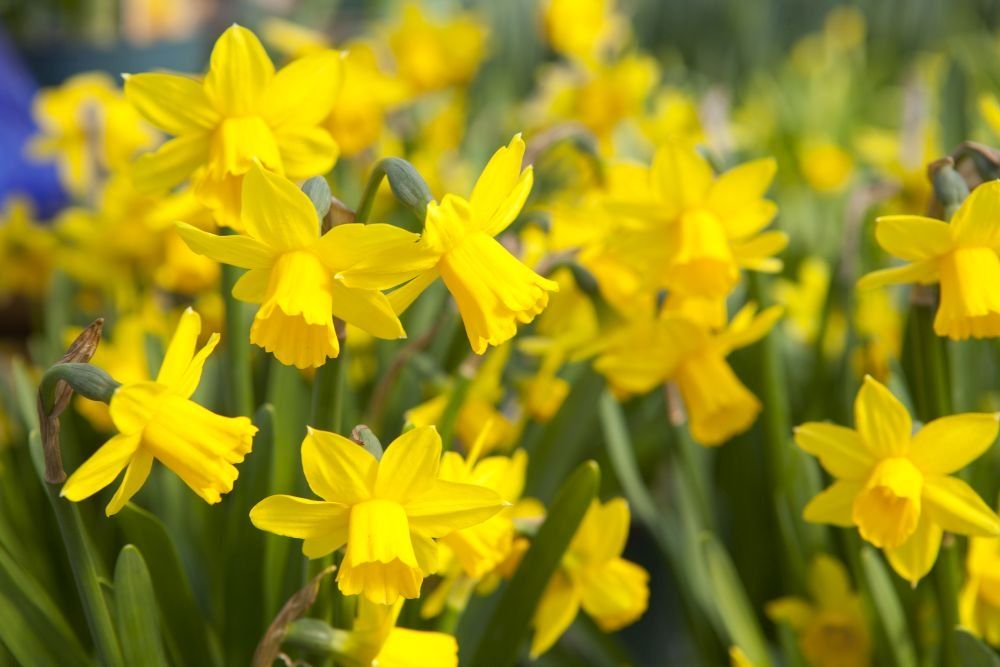 Editor’s note: This article is an update to Dr Packer’s April 2014 article that appeared in Psychiatric Times, "Daffodils as Antidepressants (What Wordsworth Knew)."

Emerald City versus the green of spring
For Dorothy, it was lions and tigers and bears. Yet she still made it to the Emerald City.

For us, it’s been tornados, volcanoes, epidemics, and more. Now we have COVID-19; is the coronavirus here to stay? Or will we make it to our own equivalent of Emerald City? Although we can’t predict the extent of the epidemic at the time of this writing, I can confidently say that soon we will see leaves of green-that burst into buds-and that such greenery will be better and more beautiful than those ersatz emeralds that Dorothy sought.

If we focus on only the bad news, and click on every catastrophic online link, and harp on the devastation that nature brings, we might conclude that nature is a destroyer and nothing but. But that’s hardly the case, especially not when we think about daffodils and Wordsworth’s words, which are just as uplifting today as they were when he penned his since immortalized “Daffodil” poem in 1804.

At times like these, it’s easy to wax medieval, and to envision the death and devastation of the bubonic plague or the Black Death-which are not even remotely related to our current COVID concerns. Better to return to the Romantic Era, when William Wordsworth (1770-1850) produced his historic poem and when his suffering soul found salvation after chancing upon a random field of flowers.

Lonely clouds versus dancing daffodils
It was more than two centuries ago that William Wordsworth (1804) serenaded this symbol of spring. His poem about daffodils became the most widely read poem in the English language. In fact, it came to be called “Daffodils”-although that was not the true title of the poem. Wordsworth’s chosen title reminds us that the British bard was not always so upbeat. He was no stranger to sorrow himself. On the contrary, for Wordsworth was primed for depression, having lost each of his parents when he was still a young child.

Let’s begin with Wordsworth’s original title: “I Wandered Lonely as a Cloud.” Apparently, that was how he felt until he came upon “a crowd . . . of daffodils.” Then he became ecstatic, as he watched the daffodils sway in the spring breeze. That daffodil dance that Wordsworth described was world’s away from the morbid dance macabre that evolved during medieval plague years.

Wordsworth was way ahead of the curve in so many ways, as poets typically are (or so said Freud, in a prediction that few refute). Wordsworth’s attitude anticipated 19th century “nature cures” adopted by upscale asylums, which added tranquil landscapes to their therapeutic regimens.1 These tranquil landscape regimens stood in stark contrast to the much-maligned public institutions that functioned as poorhouses and prisons as well as holding pens for persons with mental illness.

Having recently endured intense isolation in a remote village, this sensitive soul chanced upon a solution to his plight. The sight of daffodils sprouting from the soil rescued him from the sadness of solitude that hung over his head like a cloud.

It wasn’t just Wordsworth who benefited from his observations. His words relieved the deep and dark depression of John Stuart Mills (1806-1873), who was born a few years after Wordsworth wrote, and who later became the 19th century’s most significant English-speaking philosopher.

If we examine his exact words, we can learn even more from his experiences.

“I wandered lonely as a cloud, That floats on high o’er vales and hills,” Wordsworth writes, “When all at once I saw a crowd, A host of golden daffodils; Beside the lake, beneath the trees, Fluttering and dancing in the breeze.”

The poem continues:
Continuous as the stars that shine
And twinkle on the milky way,
They stretched in never-ending line
Along the margin of a bay:
Ten thousand saw I at a glance,
Tossing their heads in sprightly dance.
The waves beside them danced; but they
Out-did the sparkling waves in glee:
A poet could not but be gay,
In such a jocund company:
I gazed-and gazed-but little thought
What wealth the show to me had brought: . . .

Wordworth, “couch cures,” mindfulness, and creative visualization
When Wordsworth rhapsodized about the yellow flowers, it is doubtful that he expected his verse to translate into asylum treatments. It is even less likely that the poet foresaw Freud’s so-called couch cure, even though Wordsworth concluded:

For oft, when on my couch I lie
In vacant or in pensive mood,
They [daffodils] flash upon that inward eye . . .
And then my heart with pleasure fills,
And dances with the daffodils.

In other words, Wordsworth has flashbacks of flowers, and delights in reexperiencing those daffodils. Unlike trauma survivors who revisit the same painful situations through daydreams and nightmares, Wordsworth deliberately conjures up images of those beautiful botanicals. He uses his recollections to his best advantage. In contrast to analysts and some insight-oriented therapists or exposure and response specialists who excavate their patients’ painful recollections, with the hopes of effecting a catharsis or entraining new responses, Wordsworth stays on the surface. Like contemporary practitioners of “mindfulness” methods, Wordsworth experiences the moment as he redirects his gaze and focuses on the first signs of spring: the daffodils.

There are many parallels between Wordsworth’s approach and experimentally proven contemporary treatments. Today, we teach related techniques to persons with PTSD. Called “creative visualization” or “imagery rehearsal,” those approaches substitute pleasant and peaceful imagery for unsettling thoughts and distressing memories. This pleasant approach-exposure to delightful daffodils-is far-removed from desensitization that requires re-exposure to painful past events (although desensitization has its proponents and its place).

Daffodils, today and yesteryear
Taking a cue from Wordsworth-but without crediting his verse-New York City officials planted 10 million daffodils bulbs after 9/11, to assuage the distress left by the deaths that followed the destruction of the Twin Towers. Wordsworth himself spotted “Ten thousand . . . at a glance.” For him, that sufficed-but the Big Apple had to be bigger, if not better. In 2007, daffodils became New York City’s official flower and New Yorkers could deflect painful memories of the past, by wandering through streets and parks, searching for specks of gold (gold flowers, that is).

How can daffodils help us today, at a time when psychopharmacological treatments advance by the day, and when more and more high-tech neuromodulators are being brought to market, but when the public’s skepticism about Big Pharma and its profit motive push forward just as fast?

Returning to the romantic era, and reexperiencing the “natural supernaturalism” espoused by Wordsworth,2 seems strangely out of date, or at least out of place in an urban area. Still, many insist that flowers boost their moods, sometimes even better than medications or meditation. Gardening therapy is growing, both in popularity and in respect. Some people are ready to dig into the earth, to plant bulbs that bloom in early spring, while others prefer to enjoy their neighbors’ efforts or visit public parks. For those who question the value of natural approaches, or find them too atavistic or simplistic, Audubon Society bulletins often list studies about nature cures, some better constructed and more credible than others, but most are enticing enough to try.

Scientific studies from the University of Copenhagen identified chemicals in daffodils that cross the blood-brain barrier, which led to speculations that daffodils may help synthesize better antidepressants at some point in the future.3 It remains to be seen if those studies will be replicated, or if that data will prove profitable enough for Big Pharma to pursue, but, right now, we know that Wordsworth’s wisdom about daffodils persists.

Not everyone can enjoy daffodils (or other flowers) first-hand. For those who suffer from hay fever or other allergies, or shun the sun for medical reasons, YouTube offers an abundance of “Daffodil” readings online. World-renowned actors post polished poetry performances online (at no cost to the viewer). Many Wordsworth readings are more homespun and heartfelt. Slideshows of photos and paintings add to the listening experience and allow even the homebound-or the quarantined-to join Wordsworth’s ritual of “dancing with daffodils.”

Loneliness: a contemporary affliction or the “human condition”?
Wordsworth was prescient in other important ways as well. He admittedly ached from the loneliness that is said to be endemic in contemporary American and British society. Or so say recent studies by Cigna, a mammoth insurance company that sells life, disability, and medical policies, tracks mortality and morbidity trends and has a vested financial stake in identifying-and preventing-factors that adversely affect its insurance claims.

Reading Wordsworth reminds us that “loneliness” is hardly the recent invention that it has been made out to be. JAMA published an important piece on loneliness back in 1980 as well as a more updated article.4,5 Loneliness is also the province of poets and is sometimes the catalyst of creativity. Since we can expect loneliness to skyrocket if quarantines and curfews and social distancing persist, we can take a cue from Wordsworth and at the very least, we can look at daffodil sites online, if not in person, even if city officials limit our use of public parks. (Dafflink.org, operated by the American Daffodil Society, can keep even the most restless busy.)

Differential diagnosis: does it matter?
As fond as I am of Wordsworth’s poem, I feel compelled to add a disclaimer: it is entirely possible that Wordsworth was suffering from seasonal affective disorder when he spotted the daffodils. Wordsworth does not mention it, but we know that daffodils are an early sign of spring. They signal the end of winter. Sometimes, they sprout even when snow still covers the ground. Perhaps he incorrectly credited daffodils for the spontaneous remission of his winter depression. After all, he did name his poem “I Wandered Lonely as a Cloud,” suggesting that he was very, very sad at the start. Only afterward did his verse come to be called “Daffodils.” Some speculate that he showed signs of bipolar disorder, and that his springtime switch to ecstasy and poetry, with increased exercise (through hills of daffodils), signaled the start of mild hypomania.

But what difference does his diagnosis make, when we can identify the same stressors in more ordinary souls, who might be suffering as much as Wordsworth did, before he saw the daffodils? While this explanation is possible, maybe even probable, we must ask ourselves, “Is it important?” Given that we practice in an era of “evidence-based medicine,” when anecdotal reports have less credibility than case-controlled studies, we cannot automatically accept Wordsworth’s words at face value (in theory, at least). Or can we? Perhaps Wordsworth’s “Daffodils” should be grandfathered into our psychotherapeutic armamentarium, since his insights have withstood the test of time. Plus, no adverse effects have been reported.

And as for the emeralds of the fabled Emerald City, which I mentioned at the start of this article, I ask you: can those fanciful jewels and factitious wisdom that Dorothy sought possibly compete with the real life green of spring, and with the insights that Wordsworth invites? I think not.