ADHD and Substance Use: Current Evidence and Treatment Considerations

Because comorbid substance abuse is the rule rather than the exception in individuals with ADHD, accurate diagnosis, prognosis, and management of ADHD is challenging even for the most skilled practitioners. 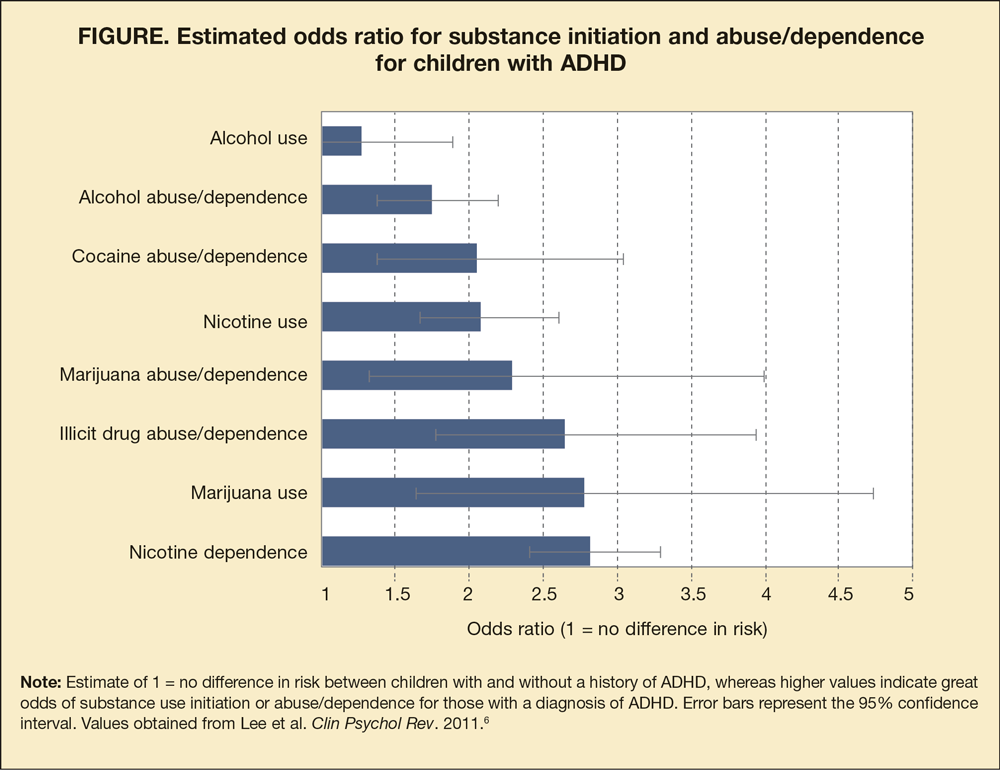 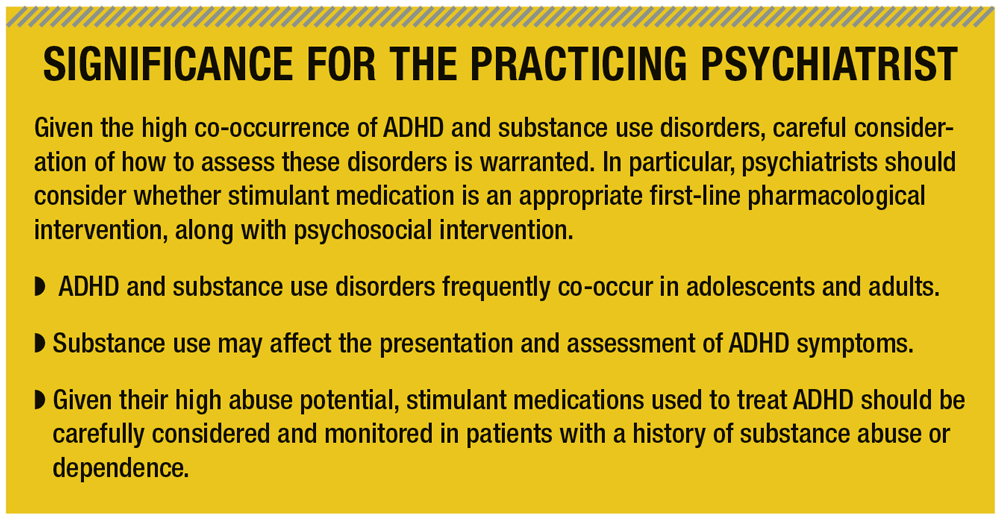 The presence of comorbid disorders is often the rule rather than the exception in individuals with ADHD. Of particular concern is problematic substance use; alcohol, cannabis, cocaine, and nicotine represent some of the most commonly abused substances. Elevated substance use significantly complicates a patient’s symptom presentation, making the accurate diagnosis, prognosis, and treatment of ADHD challenging even for the most skilled practitioners.

The link between ADHD and substance use disorders

Children with ADHD are at increased risk for alcohol use disorder as they get older, and they are more than twice as likely to develop nicotine dependence and marijuana or cocaine abuse or dependence (Figure). Approximately 15% of adolescents and young adults with ADHD have a comorbid substance use disorder (SUD), while 11% of individuals with an SUD also meet the criteria for ADHD.1 Findings indicate that the overlap between these disorders is not random, and several explanations have been posited for their link.

ADHD and SUD have been described as disorders of disinhibition, which suggests an underlying vulnerability that is shared by both disorders. Alternatively, features of ADHD, such as impulsivity, may increase the risk of initiating substance use. In fact, children with ADHD are significantly more likely to try a range of substances during their lifetime compared with their non- ADHD counterparts (see Figure).

The mechanisms underlying the increased risk of SUD among those with a history or current diagnosis of ADHD are not well understood. Persistent ADHD, which might be a marker of increased vulnerability and/or of reduced access or responsiveness to intervention, is associated with much higher rates of SUD.2 The high co-occurrence between ADHD and SUD merits special consideration.

Assessment for ADHD requires the ability to distinguish between ADHD and other disorders that demonstrate significant symptomatic overlap. Among individuals who present with active substance abuse, it is critical to distinguish between a valid ADHD diagnosis and substance-induced impairments that can negatively affect attention, concentration, and impulsivity. Many psychoactive substances have acute effects that can mimic the symptoms of ADHD, such as chronic marijuana use, which has been associated with deficits in problem-solving, organization, and sustained attention that may persist even after 3 weeks of abstinence. Because of this, practitioners might want to prioritize the treatment of substance use and then re-evaluate patients for ADHD after a period of prolonged abstinence.

Unfortunately, this approach is sometimes not feasible, particularly for patients who present with significant and untreated ADHD symptoms that may impair the ability to engage in and benefit from SUD treatment. Thus, a comprehensive evaluation of ADHD symptoms during prior periods of abstinence may be the next best approach for assessing co-occurring SUD and ADHD, with a focus on whether the ADHD symptoms preceded the onset of substance use. While this is a reasonable recommendation, this approach is not without challenges, as it requires patients to recall the onset and severity of their initial symptoms. This may be especially challenging for patients with ADHD and substance abuse because both are associated with neurocognitive deficits.

Obtaining collateral information from parents and teachers, medical records, and psychological evaluations is recommended to elucidate the patient’s childhood functioning. Although it is not always feasible to access such corroborating information for adults with suspected ADHD, such data can be useful in determining whether ADHD symptoms were present in childhood and in differentiating primary from substance-induced ADHD symptoms.

Malingering, while uncommon, merits consideration in any diagnostic evaluation of co-occurring ADHD and SUD because stimulant medication may be sought for the treatment of ADHD. Methylphenidate and amphetamine salts have a high abuse potential and can produce a feeling of euphoria similar to illicit CNS stimulant drugs such as cocaine. Some individuals with SUDs may be motivated to feign a diagnosis of ADHD to gain access to stimulant medications.

Information regarding prototypical ADHD behavior is readily accessible via the Internet, which allows individuals who seek stimulants for non-medical purposes to be sufficiently “prepared” before a diagnostic evaluation. Unfortunately, neuropsychological evaluations, which are often used in conjunction with self-report to establish ADHD diagnoses, are also susceptible to feigned symptoms. Thus, incorporating ratings of patient functioning from other sources is advised, with particular attention to instances in which the client reports significantly more symptoms than other informants.

Many parents worry that stimulant medications will have iatrogenic effects and potentially increase a child’s susceptibility to subsequent drug use. Conversely, some caregivers, hoping for a rapid response to medication, may want to use stimulant medication as a first-line treatment-even for young children for whom pharmacological intervention should be considered only after appropriate behavioral interventions (eg, parent training). Parents clearly want to do what is best for their children, and psychiatrists and other clinicians should be prepared to provide evidence-based support for recommendations regarding treatment for ADHD in the context of potential risk of a later SUD.

The American Academy of Child and Adolescent Psychiatry guidelines include psychoeducation regarding treatment options and the expected course of symptoms, adjunctive school support, and the use of FDA-approved medication if pharmacological intervention is selected. Treatment decisions should be made jointly with the patient and his or her family. The risk-to-benefit ratio of a particular stimulant and its adverse effects (eg, sleep disturbances, loss of appetite, growth stunting) should be discussed, and information provided about the flexibility that stimulant treatment allows for medication-free “holidays” on weekends and school breaks.

There is inconclusive evidence that stimulant medications are effective in reducing symptoms of ADHD and comorbid substance abuse in adults. While some studies have shown a reduction of ADHD and SUD symptoms following treatment with stimulant medications, others have documented improvements only in ADHD symptoms or no benefits at all.4,5 Unfortunately, the comorbidity of ADHD and SUD is associated with a poor prognosis for SUD treatment; therefore, prioritizing the treatment of ADHD merits consideration. Yet comorbid SUD is also associated with a poor prognosis for ADHD treatment, and it is often recommended that treatment of active substance abuse should precede the treatment of ADHD. Psychosocial interventions for SUD may need to be individualized to account for a patient’s ADHD symptoms, which may interfere with his or her ability to engage in treatment and increase the likelihood of treatment nonadherence.

Psychotherapy is always recommended for patients with comorbid ADHD and SUD. In addition, non-stimulants (eg, atomoxetine) or extended-release stimulants should be considered when treating co-occurring ADHD and SUD, as these medications are less subject to abuse and diversion and may be preferable for patients at risk for substance abuse. Although non-stimulants are less effective than stimulants in treating ADHD symptoms, they may represent an appropriate middle ground between no medication at all and stimulants.

Any psychoactive medication can be misused, so diligent documentation of all prescriptions must be maintained. Repetitive requests for an increase in dosage or early refills should be explored with the patient. For those with a history of substance abuse, medication decisions should ideally be reached through collaboration with the patient, family members, and spouses/partners, and it is critical to emphasize the importance of taking the medications as prescribed. For adolescents at high risk for diversion or misuse, parents can be encouraged to regulate their child’s medication use by storing all medications in locked cabinets.

ADHD is associated with increased risk of substance use initiation as well as abuse and dependence. There is no evidence that stimulant treatment for ADHD increases the subsequent risk of SUD; however, such medications are prone to misuse and diversion. In addition to thorough, multi-informant, and developmentally sensitive assessment, careful consideration of potential abuse of medication treatment for ADHD is warranted. Nonpharmacological or non-stimulant medications may be appropriate for treatment of ADHD for those at risk for SUD, or for those who have a current diagnosis of SUD. In addition, psychosocial intervention is recommended in conjunction with any medication treatment for individuals with comorbid ADHD and SUD.

This article was originally published on June 30, 2017 and has since been updated.

Ms. GalÃ¡n is a graduate student in the joint clinical and developmental psychology PhD program at the University of Pittsburgh; Dr. Humphreys is Postdoctoral Fellow, Department of Psychology, Stanford University.