The Anti-Youth Pill? Alprazolam Toxicity Can Add Years to Brain Age and Appearance

Here's a case that illustrates the potential for alprazolam to create a dementia-like appearance-not to mention a premature aging of the patient. 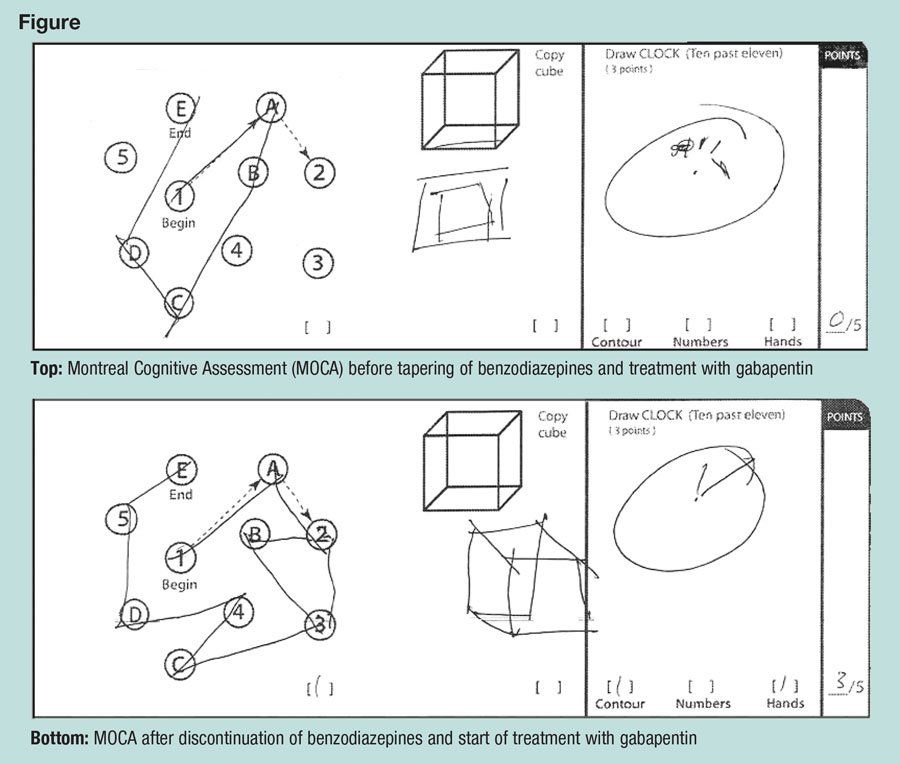 The elderly woman sat in my waiting room, referred for a dementia workup by her primary care physician. At her side sat a younger-looking man, who appeared to be her son. As I approached, I determined that I needed a release of information form signed, so he could join us as a collateral historian.

“Hello, I’m Dr. Henderson,” I said. She introduced herself and we shook hands. “And who is this young man with you?”

I was momentarily shocked. She looked to be in her late 70s and he in his mid-50s. “OK, these things happen,” I thought to myself.

She slowly teetered down the hallway toward my office, her husband holding one arm and her other hand holding the wall. I stopped them and asked her to walk down the remainder of the hallway on her own. She swerved and swayed. She had to stabilize herself on the wall several times. When she reached the office, I took her arm and guided her to a seat. She appeared ashen, confused, weak, and very old. I looked at her birth date-she was only 66 years old. Her husband was actually older!

I asked her if she knew why she was coming to see me. She replied that she was very anxious. I thought to myself, “Well, anxiety can be an increasing issue with dementia.” In fact, I typically see 2 different patterns associated with anxiety in patients from whom I have functional brain scan data. Patients with anxiety or PTSD will show increased activity (evident as increased perfusion on a single-photon emission computed tomography [SPECT] scan and increased glucose uptake on a positron emission tomography [PET] scan) in the caudate, putamen, inferior orbital cortex, and operculum.1,2 The other type of anxiety occurs in those who have diffuse cortical hypofunction, either from dementia, intoxication, toxic injury, infectious disease, or many other causes of cortical dysfunction.3 So perhaps for this woman, she may be having more anxiety as her cortex functions less and less well.

As the examination proceeded, I asked her about her medications. Her husband spoke up and reviewed her medications and dosages. I was frankly shocked. In addition to duloxetine, omeprazole, and a statin, she was taking 2 mg of clonazepam and a staggering 8 mg of alprazolam per day. Could this be the source of her difficulty?

During the mental status examination, she was disoriented to day and date, although she did correctly state the year. Her mental state prompted me to perform a Montreal Cognitive Assessment (MOCA). The MOCA combines features of the Trails test, Mini-Mental Status examination, Draw-A-Clock test, and other key tests for dementia. She required a protracted period of time to complete it with me. Her initial performance is shown in the top half of the Figure. She could not recall any of 5 items after 5 minutes. She could not do serial calculations. She could not name animals or recall the date. Her attempt at a Trails-A test was unsuccessful. She could not copy a 3-dimensional box. Her attempt at a clock was a circle with a few stray marks within. Her overall MOCA score was 14 out of 30.

The Draw-A-Clock test is generally fairly insensitive. The American Academy of Neurology reports it has a sensitivity of 83% and a specificity of 72% for diagnosing moderate to severe dementia, but is quite poor for the diagnosis of mild cognitive impairment.4 Some studies put its sensitivity at 40%5; however, when it is positive, it means there is a brain problem. The MOCA has better sensitivity-roughly 100%.6 My review of the literature showed that SPECT scans have a sensitivity of 96% and a specificity of 90% in detecting dementia for normal aging.3 PET scans are slightly better (90% sensitivity; 98% specificity) but are more expensive.3,7

Despite the MOCA findings, I was not convinced this woman had dementia. I suspected this was a case of alprazolam toxicity, which would require slow tapering to avoid withdrawal symptoms in this already fragile patient. More importantly, I needed a better and safer way to treat her anxiety that despite the large doses of benzodiazepines was still her main complaint. I explained that gabapentin most likely functions as a partial blocker of voltage-gated calcium channels. It is closely related to pregabalin, which is more potent and has greater bioavailability; however, it is 2 orders of magnitude more expensive than gabapentin.

In a review by Keck and colleagues,8 gabapentin was described as effective for panic disorder and social phobia at relatively low dosages. Pregabalin is very effective for a variety of anxiety disorders at dosages of 200 mg BID. The estimated comparable dosage of gabapentin is 1200 to 1440 mg BID.

Two weeks later, the patient returned to my office. Her alprazolam dosage had been tapered to 6 mg daily; she continued taking 1 mg BID clonazepam and started gabapentin on a titration to 300 mg BID. She still felt anxious, but she appeared healthier and less ashen. She walked more steadily but still needed support.

I saw her again at 6 weeks after beginning to wean her from alprazolam. The dosage was down to 3 mg daily; she was taking a total of 800 mg daily of gabapentin and remained on 1 mg BID clonazepam. When I walked into the waiting room, I did not recognize her. The frail, confused elderly woman was gone. In her place, was a young-looking, middle-aged woman with bright eyes and a pleasing smile. She strode down the hallway unassisted with assurance. When we undertook the MOCA, her performance was dramatically improved (Figure, bottom half). She was able to recall 2 out of 5 items at 5 minutes. She easily recognized pictures of animals. She almost perfectly copied a 3-dimensional box, and she drew a respectable clock. She happily told me that she was walking her dog every day, cleaning the house, cooking dinners, and caring for her granddaughter-all tasks that she had not performed for many months during her alprazolam-induced departure from reality. She and her husband were thrilled.

I have seen benzodiazepine-induced cognitive impairment in many patients-difficulties with math, poor recall, impaired learning, and mild confusion. Recently, I took over another psychiatrist’s practice and 40% of his patients were taking alprazolam, often combined with clonazepam and even zolpidem as a soporific. With each patient, I found the benzodiazepines, particularly alprazolam, were impairing cognitive function and, frankly, not controlling their anxiety. As I have shifted each of these patients to a less “toxic” regimen, one after another has noticed a significant improvement in cognitive function.

The case described above is a particularly dramatic example. It illustrates the potential for alprazolam to create a dementia-like appearance-not to mention a premature aging of the patient. I hope this woman’s case serves as an alarm bell to critically assess any patient receiving benzodiazepines for cognitive impairment.

Today, my patient is completely off alprazolam and clonazepam and takes 2600 mg of gabapentin daily. She is active, engaged, and youthful. She experiences no anxiety. Now, if I could only fix her hearing . . .

Dr. Henderson is President of The Synaptic Space, a neuroimaging consulting firm, Co-owner of Neuro-Luminance, and Co-founder of the Neuro-Laser Foundation. He is active in research with over 30 publications, and is a guest editor of numerous scientific journals, a past officer of the Brain Imaging Council of the Society of Nuclear Medicine and Molecular Imaging, and current President of the International Society of Applied Neuroimaging. He reports no conflicts of interest concerning the subject matter of this article.

3. Henderson TA. The diagnosis and evaluation of dementia and mild cognitive impairment with emphasis on SPECT perfusion neuroimaging. CNS Spectr. 2012;17:176-206.