Fat, Food, and Mood: Beyond Omega-3s 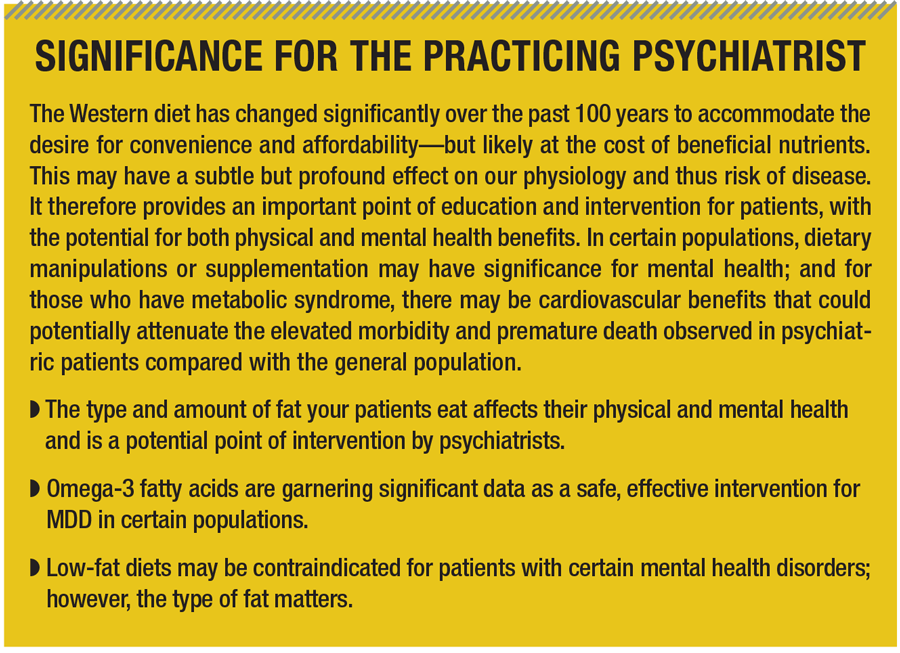 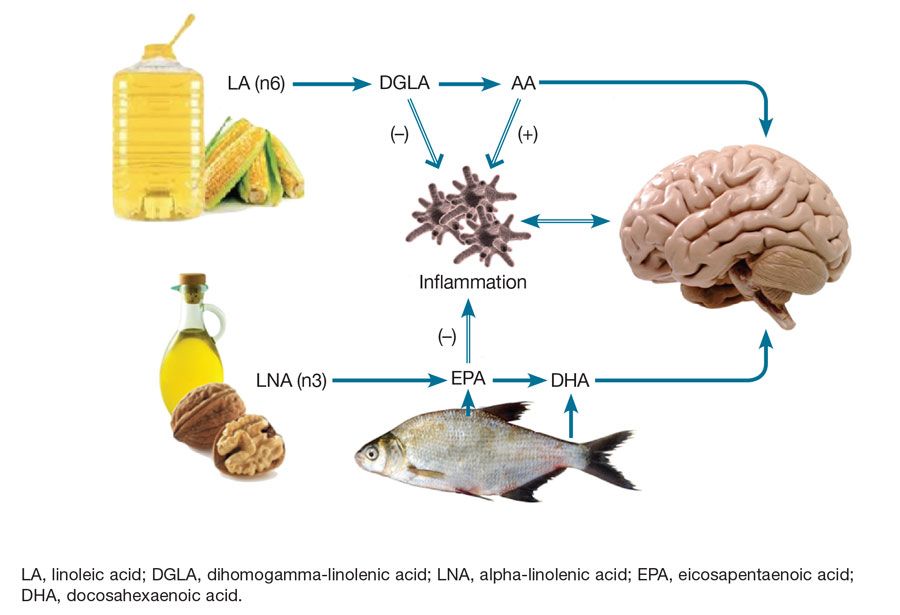 Over the past several decades, omega-3 polyunsaturated fatty acids (PUFAs) have been investigated as a potential therapy for psychiatric disorders. Supplementation has been found to ameliorate depressive symptoms, with particular advantage to those who are concurrently taking antidepressants. Benefits have also been found for bipolar depression, anxiety associated with substance dependence, ADHD symptoms, adverse effects of antipsychotics, and symptoms of schizophrenia and other neuropsychiatric disorders.1

However, clinical implementation of omega-3 recommendations has been complicated by inconclusive findings. Outcomes may be attenuated by considerable heterogeneity in research participants, study designs, and small sample sizes. While the evidence has not generated prescriptive guidelines for physicians, the potential benefits and benign safety profile indicate a promising intervention.

L is a 47-year-old divorced woman with a history of MDD who reports the recurrence of depressed mood at a follow-up visit. She is taking sertraline (200 mg daily), which led to remission of her last depressive episode a year ago. She has low energy, amotivation, and poor concentration. Her appetite is “up and down” with a 15-lb weight gain in the past year; her BMI is 32. She is currently less depressed than previously but reports low mood. She sleeps 7 to 8 hours a night but rarely feels well rested; she uses CPAP for obstructive sleep apnea as instructed. She denies recent stressors or safety concerns, and further review for psychiatric symptoms is negative.

A review of her daily activity and diet reveals that she wakes around 7:30 am and eats a sausage and egg sandwich on her way to work. She is usually hungry by 10 am and has a doughnut from the break room. She frequently eats fast food for lunch (sometimes she orders a salad) and drinks a jumbo diet soda to maintain alertness throughout the afternoon. She often picks up a pizza or a hot sandwich after work or heats up a TV dinner at home. She reports having little energy or time to exercise. She wonders if the sertraline is no longer working and whether she should change medications.

What are healthy fats and why should psychiatrists care?

Previous clinical trials have not adequately considered omega-3s as a part of the larger dietary picture. Omega-3 PUFAs, along with omega-6 PUFAs, are essential nutrients that must be consumed in the diet. Alpha-linolenic acid, found in nuts and plant oils, is the essential omega-3 that can be converted to eicosapentaenoic acid (EPA) and docosahexaenoic acid (DHA), which have been the focus of most clinical studies in psychiatry. However, the conversion rate is low and genetically variable. Therefore, maintenance of EPA and DHA sufficiency may require direct dietary intake as supplementation (eg, fish oil) or from eating fatty cold-water fish (Figure).

EPA and DHA contribute to cardiovascular, inflammatory, and neurochemical functions and have an FDA-approved indication to lower triglycerides. Linoleic acid is the essential omega-6 and comprises approximately 8% of the caloric intake of the Western diet.2 It is converted to bioactive molecules involved in energy homeostasis, endothelial function, adaptive inflammation, and endocannabinoid neurochemistry.

The dietary balance between omega-3 and omega-6 intake is important because they have several counterbalancing physiological effects. A large epidemiological study concluded that lower intake of dietary PUFAs is significantly associated with all-cause mortality-linoleic acid showed the largest effect size.3 Clearly, omega-3s are not the whole story, and interactions with the broader dietary background must be considered to explain the equivocal nature of the literature.

A few other classes of fatty acids warrant mention (Table). Monounsaturated fatty acids (MUFAs), which include oleic acid from olive oil, are another major dietary fat with health benefits. They have not been the focus of the psychiatric literature, but they are considered heart healthy and likely to benefit brain function. On the unhealthy list are the saturated and trans-fatty acids. Both are associated with increases in all-cause mortality, and it is recommended to limit intake, especially of trans fats.3

Finally, of interest to the bigger picture of evaluating dietary fats in psychiatric illness is an older literature that describes associations between low cholesterol and suicide. Early literature suggested increased rates of suicide and violent behavior in patients treated with cholesterol-lowering medications, and mechanisms that link cholesterol to suicidal behavior have been proposed.4,5 These studies were not consistently replicated in subsequent trials, and recent reviews show this hypothesis remains unresolved.6 Regardless of the current inability to draw conclusions, it provides additional support for the link between fat metabolism and mood control.

Therefore, general dietary advice to eat less fat, which has been promoted to the American public for decades, is not sufficient guidance and is potentially problematic for psychiatric and other health measures. The type of fat matters!

There is ongoing debate about how EPA and DHA benefit psychiatric disorders. EPA seems to play a greater role in endothelial function, including the vascular systems, and has oxidation products with anti-inflammatory effects.7 DHA is enriched in cell membranes, especially in neuronal tissue, and affects membrane signaling kinetics and neuronal function.8 While cell membrane DHA concentrations differ consistently between patients with MDD and controls, there has been no significant improvement with DHA mono-supplementation.1 However, the most up-to-date and standardized meta-analysis found that the beneficial effect of a combination of EPA and DHA on depression (standardized mean difference of 0.398) was similar to that reported in meta-analyses of antidepressants.9,10

A meta-analysis of combination therapies using antidepressants and adjunctive omega-3 supplementation found an effect size of 0.61.11 Both reviews revealed an effect of EPA independent of DHA that suggests the benefit may be mediated through anti-inflammatory effects rather than correction of a deficit of membrane DHA. This makes theoretical sense given preclinical studies that associate systemic inflammation with fatigue, anhedonia, anorexia, sleep disturbance, and decreased synthesis of central monoamines.12

Further support for this hypothesis comes from the observation that the benefit from EPA monotherapy for MDD patients depended on increased pretreatment biomarkers of inflammation; EPA was less effective than placebo or DHA in subjects with low inflammation.13 In this study, obese patients were more likely to have a higher number of elevated inflammatory biomarkers and experienced the most improvement on the Hamilton Depression Rating Scale (HAM-D) in response to EPA. This may explain some of the variation in outcomes between studies, which have not always accounted for inflammatory status.

Omega-6 PUFAs are less studied in psychiatry; however, there is a vast and controversial literature regarding other health effects, particular on cardiovascular disease and cancer. Since the Western diet has increased from approximately 2% to 8% of total energy from linoleic acid over the past century, its health consequences (or benefits) have been questioned.2 There are 2 camps of thought:

2. The increase in linoleic acid intake is associated with reduced rates of heart disease and all-cause mortality.

Back to the clinic: putting research into practice

At this time, there is not sufficient evidence to generate specific guidelines for PUFA supplementation for different mental health conditions. Given the evidence summarized above, it is appropriate to recommend intake of enough fish oil so that the total EPA dose is at least 1 g daily (typically 2 or 3 capsules). This will include DHA at nonspecific doses. While studies attempt to identify the active ingredient in omega-3 supplementation, it has not been shown that purified monotherapy outperforms the combination.

In 2006, the American Psychiatric Association adopted the consensus recommendations of the American Heart Association for psychiatric patients with mood, impulse, or psychotic disorders. The recommendations include consumption of fish at least twice weekly and supplementation of 1 to 9 g daily of combined EPA and DHA.21 Patients who have higher levels of inflammation may be more likely to benefit from higher doses of omega-3 supplementation. The presence of inflammation can be inferred from past medical history and metabolic risk factors (eg, BMI, hyperlipidemia).

There are many adequate fish oils on the market, with the caveat that one should seek products with a seal of third-party testing to ensure purity and quality (ie, United States Pharmacopeia [USP]). Fish oils are usually well tolerated, with a low risk of serious adverse effects. Most commonly, people report a fishy aftertaste or mild nausea, which typically does not lead to discontinuation.22 Up to 5 g daily is considered safe for the general population, although in the US doses higher than 3 g daily require monitoring by a physician, because of the theoretical risk of bleeding.

Finally, it is important to remember that supplements do not justify an otherwise poor diet. We recommend talking to patients about their dietary patterns and helping them realize that diet may play a role in how they feel. Low-fat diets may be a relative contraindication for psychiatric patients, and supplementation with omega-3s may be beneficial; however, dietary supplements are not substitutes for healthy eating.