Boyhood’s power-and poignance-centrally derives from one’s visceral experience of the authentic signatures of time on its actors’ features and forms . . . life cycle theory made flesh as it were. 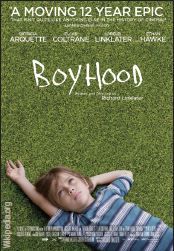 This review contains spoilers. The author recommends seeing the film before reading his review.

A critic observed that reading a Chekhov story was like holding a tiny, fluttering bird cupped in one’s hands. This lambent immediacy pervades Boyhood, Richard Linklater’s latest film. So does a Chekovian intimation of the numinous, of a mysterious “otherness” that both mirrors and transcends the “suchness” of ordinary life.

Linklater’s typical characters (eg, in Slacker and Waking Life) are adolescents of all ages; quirky, picaresque outsiders. As a writer and director, he is known for innovative technical and narrative strategies. His deceptively rambling plots frequently occur over a day or along an uncertain span of time. One gradually realizes their complexity and depth further down the line. (He has joked that his name puns his purposes-“linked later.”)

Boyhood pushes these to the edge and beyond. The film’s audacious creativity and the artistic and financial risks entailed in its production remind one of breakthrough pictures such as Citizen Kane.

In 2002, Linklater brought together 4 actors to portray the members of a divorced middle-class Texas family. Two well-known adults-Ethan Hawke and Patricia Arquette-played parents Mason and Olivia. Two unknown children depicted their kids: Ellar Coltrane, aged 6, as Mason Jr; and Lorelei Linklater (the filmmaker’s daughter), aged 8, as Samantha. Linklater intended his story to pivot around the son’s passage from boyhood to late adolescence.

Following the initial shoot, Linklater brought his principals together for several weeks of each subsequent year, completing the project in 2013. Along the way, subsidiary characters came, went, and appeared again.

Filming in real time for years has been done before-notably by Michael Apted in his 7-Up documentaries. However, as far as I know, Linklater is the first in the history of film to show actors aging with the lives of their fictional characters over an extended period-12 years, more or less.

Horror cinema is often ruined when the monster is revealed as a man in a monster suit. Analogously, encrusted “old person” makeup still compromises films in other genres, including excellent pictures such as Hoover.

Boyhood’s power-and poignance-centrally derives from one’s visceral experience of the authentic signatures of time on its actors’ features and forms . . . life cycle theory made flesh as it were. As Mason matures into early manhood-his progress nominally is Boyhood’s central focus-Samantha and Mason’s parents negotiate the developmental issues of their respective life stages.

Like most of us, they stumble along an uneven path through stress and pleasure, sorrow and laughter, to accomplish the tasks delineated so potently in Erikson’s Childhood and Society. Their success renders the plight of the unlikable few who fail more pitiful. (Linklater treats these few with Chekhovian cool compassion.)

In Boyhood’s establishing shot, 5-year-old Mason lies sprawled on the grass, gazing up. His face is a cherubic blank waiting to be filled in. The action of Linklater’s small epic begins like grand Homeric epics-in medias res, the middle of things. Mason’s parents have already separated. Now and hereafter Olivia’s competence as a hardworking, exasperated single mom is as crystal clear as her poor choices in men.

Mason’s father returns as if dropped from the sky from Alaska, where he has been working itinerantly and playing rock guitar. In fine bohemian spirits, he showers gifts upon the kids who obviously love him madly and miss him terribly. He cheerfully assumes he can charm Olivia into reconciling.

Olivia has been through it all before, wants nothing from him but to be the better father he’s always promising. Mason and Sam watch their parents argue and Mason Sr’s departure through a closed window that muffles their voices. Disputes between adults, seen secretly and barely heard at a remove-usually by Mason-figure repeatedly throughout Boyhood.

Mason bikes, sprays graffiti, leers at brassiere ads with his latency-age buddies-but he also muses over a dead bird and wonders if elves are really real. One intuits a dawning-at times dreamy-thoughtfulness, and his growing self-perception as a perennial secretive outsider/observer.

Mason’s schizoid defenses madden adults who incessantly urge him to “focus.” (Some are fools; others, genuine mentors whose influence will only register with time.) His schizoid-like distancing also enables him to endure considerable traumat-ic events, such as Olivia’s move to Houston. (While improving her lot, it also uproots Mason from the secure place and friends of his early childhood.) Veiling his distress allows him to survive Olivia’s pair of disastrous marriages-to a charismatic professor turned abusive drunk, then to an idealistic veteran turned disillusioned alcoholic. (The deterioration of her second marriage and other crucial events in the characters’ lives-hurtful or constructive-typically take place off-camera and must be inferred. Linklater also deliberately keeps roiling politics and booming technology at Boyhood’s margins.)

Mason’s inveterate elusiveness will become a major thrust in his adolescent persona, articulated with a skeptical mistrust of the adult world’s inconsistency and absurdity. His interminable gloomy critiques also cost him a relationship that probably wouldn’t have worked out anyway. Still, he continues to do what’s expected at home, in school, at a menial dishwashing job to earn college money-while always carefully keeping his own ironic counsel.

Linklater adroitly drops subtle hints about the fate of a character (eg, Olivia’s academic drunkard husband noisily orders a second bottle of wine at their honeymoon celebration). The director also skillfully implies a character’s dark future, then defies our expectations. Mason Sr ceases his itinerant wandering, settles into an actuarial job, marries successfully, and has another child. He also becomes the good father Mason always desired, if never geographically close (keeping intimacy distant is in his father’s nature too).

Futile, often hilarious, attempts to bridge the generation gap constitute one of Boyhood’s many keenly observed themes, such as Mason Sr’s hamfisted tutoring of Samantha on birth control at a restaurant, utterly failing to register her squirmy “Geez dad, what if!?!” reaction.

Arquette’s Olivia has the film’s most powerful declarations, amidst a cornucopia of heart-piercing and hilarious moments. She has become a successful psychology professor herself; settled into a reasonably content life sans marital woes. She is eager to have Mason and Sam blessedly out of her hair and in college. Yet she breaks down unexpectedly after Mason’s graduation party, sobbing-“I thought there would be more! What’s left but my funeral?” (To which Mason responds with his characteristic wryness-“Mom, that’s 40 years away.”)

The passing of time in cinema is usually depicted through dissolves-the opening of a sequence fading over the previous scene-or through a few seconds of intervening darkness. A subtitle-such as “Kansas: Twenty Years Later”-is also frequently used to mark transitions between time and locale.

Linklater deliberately refuses these devices, choosing instead to tell his story through cuts alone. They can be subtle and seamless, such that one year bleeds into another imperceptively, and it cannot easily be discovered how many months or even years have gone by. Or startling-notably, the jump cuts between Mason’s childhood and early puberty. Boyhood wonderfully records that uncanny instant when you’re caught up short by seeing that the little boy or girl so close to your heart has shot up into a very different-and sometimes very unsettling-creature.

During high school, Mason begins to consider a career in photography. The choice stems from his inborn gift for acute observation-one has the impression he has always been framing strong pictures with a mental camera-and from the outsider stance he has adopted to deal with the sundry losses of family, homes, fathers, friends throughout his life. By his senior year, he has won second place in a state competition, and he is accepted into a college arts program.

I initially found Mason the child more interesting and winning than Mason the late adolescent. His elliptical replies felt tedious. He spoke at, not to, people. His acerbic railing about consumerist conformity seemed rote echoes of the wearisome bromides of Linklater’s disaffiliated characters in movies such as Slacker.

The film ends as Mason and his new roommates skip freshman orientation and trek into a majestic mountain landscape. Stoked to the retina “on psychedelic mushrooms,” they extol the joys of living in the moment. Mason sits with an artsy young woman who may be his next girlfriend. They muse on the Roman poet Horace’s “carpe diem.” “You don’t choose the moment,” she says to him, “It’s the moment that chooses you.”

Then on second viewing, I sharply recalled uttering similar sophomoric platitudes during interminable boozy collegiate bull sessions (which doesn’t make the carpe diems less pertinent). And I admired Linklater for seizing yet another salient moment in the life cycle, capturing in a flash the “omnipotential” stage of late adolescence, when all things seem possible and all doors open.

Mason has internalized his mother’s work ethic, but also his father’s youthful, unanchored bohemian spirit. The cherubic blankness of Mason’s 5th year is reinvented in his 18th year. What will become of him? I conjecture his future will be informed by the wrestling match between these two opposing introjects.

As a work in progress and a potential late bloomer like his father, Mason could drift into Slacker’s floating world. Or he could develop into a perceptive observer of the life cycle’s round-dance of being and becoming-like Linklater himself.

Dr Greenberg practices psychiatry in Manhattan, New York. He publishes frequently on film, media, and popular culture. For many years, his cinema column appeared in Psychiatric Times. He has appeared frequently on national and international network and cable television programs, including Good Morning America, Today, CBS Evening, and Sunday News, and on PBS, CNN, Showtime, and BBC-TV.