Brain on Fire: An Interview With Susannah Cahalan on Anti–NMDA Receptor Autoimmune Encephalitis

Both positive and negative symptoms of schizophrenia combined with those of a mood disorder led to a psychiatric diagnosis; later, a neurological diagnosis of anti–NMDA receptor autoimmune encephalitis was made. 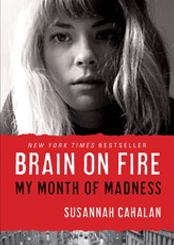 Susannah Cahalan is TheNew York Times best-selling author of Brain on Fire: My Month of Madness. Her work has appeared in Scientific American,Psychology Today, and TheNew York Times. She currently works at New York Post as a book reviewer and reporter. Recently she answered some questions for Psychiatric Times via e-mail about her recently published memoir, which explores a subject of vital importance to psychiatrists. Psychiatric Times will shortly be publishing its own review of the book.

Howard Forman (HF): In Brain on Fire, your debut book that has been called by NPR “stunningly brave” and a “gift of a book from one of America’s most courageous young journalists,” you write about some harrowing experiences that occurred during 2009, when you were 24 years old. Can you describe some of the symptoms that you experienced during that time?

Susannah Cahalan (SC): The earliest symptoms were subtle. At first, I just felt “off.” I was tired and emotional. I became fixated on certain things: I believed I had bedbugs to the point that I urged an exterminator to debug my apartment even when he insisted I didn’t have an infestation. I thought my boyfriend was cheating on me and went in search of nonexistent clues of his philandering.

Then, I felt numbness on the left side of my body, which my neurologist ascribed to “mono.” But I didn’t link my odd feelings with this physical experience.

Later, my behavior became increasingly irrational. My moods fluctuated from extreme happiness to despondency in a matter of minutes. I could no longer focus on my job as a journalist. Then I began having seizures, followed by increasingly outlandish and paranoid thoughts, and then full-blown delusions and hallucinations as the seizures started to intensify. I spent the next month of my life at New York University Langone Medical Center, where I finally got a diagnosis.

HF: Many psychiatrists might have concluded that you had bipolar disorder or maybe something from the psychotic disorders chapter of the DSM after reading your experiences. Before your disorder was correctly diagnosed, did anyone make a primary psychiatric diagnosis? If so, how did you respond to it?

SC: I had self-diagnosed bipolar disorder before my hospital stay. The symptoms really matched-and honestly, I was relieved to hear my diagnosis. The first psychiatrist I saw confirmed this bipolar diagnosis and prescribed antipsychotics. Again, I was filled with relief. Not having an explanation for my increasingly bizarre behavior was worse than knowing I had a disease with lifelong implications.

Later, when in the hospital, the psychopharmacologist initially offered a “rule out” diagnosis of schizoaffective disorder. But again on paper (ignoring many of the physical manifestations, which included seizures and high blood pressure), the symptoms matched both the positive and negative symptoms of schizophrenia combined with those of a mood disorder. So it’s not surprising to me that this was an early theory.

HF: After what was a very costly workup, the test that began the path to the correct diagnosis was astonishingly old-fashioned. Can you explain how your completion of the “Draw a Clock” test alerted the neurologist to a possible underlying neurological condition?

SC: It’s amazingly ingenious, as well as old-fashioned. The Clock Test is ordinarily given to people with dementia or Alzheimer disease. It had no business being given to a 24-year-old . . . but my doctor, Souhel Najjar, had a brilliant stroke of insight and decided to use it to test me.

He first asked me to draw a circle-and I did after one aborted attempt. (I later learned that circle drawing is an overlearned practice that many people-even those with severe cognitive deficits-can do.) Then he asked me to write in the numbers. When he stared at the page, he nearly applauded. I had squished in all the numbers-1 through 12-on the right-hand side, entirely neglecting the left side of space. This proved to him that whatever I was suffering from was neurological-not psychiatric. It was the key that finally led to my final diagnosis.

HF: When was your condition-anti–NMDA receptor autoimmune encephalitis-discovered and what was the course of treatment that has allowed you to regain so much of what was lost for much of 2009 during your acute illness and during your recovery?

SC: Anti–NMDA receptor autoimmune encephalitis was first discovered in 2007 by Dr Josep Dalmau at the University of Pennsylvania. This is not a chronic illness for many-although some have long-term disabilities and some die even with proper intervention.

But for me, it took only a relatively simple combination of steroids and immune therapies (IVIG treatment and plasmapheresis) to get back to who I am now. The recovery was a protracted, emotionally painful process, but a necessary one.

HF: Everyone who reads Brain on Fire is going to experience an exceedingly well-written piece of medical journalism that is only made better by your being the reporter and the subject. In addition to simply being on the lookout for rare but thankfully treatable conditions with psychiatric presentations, do you think there are any special lessons for psychiatrists who read your book?

SC: This is a great question. Obviously, the implications of this disease and others like it (there are many other types of autoimmune encephalitis that have been consequently discovered) are that neurological diseases can cause behaviors that are nearly indistinguishable from psychiatric diseases. I think greater vigilance on the part of psychiatrists about ruling out neurological causes is exceedingly important.

Another, less obvious outcome is that early on in my treatment, when I was thought to be suffering from a psychiatric disorder, my care was less sympathetic than it was later, when I was diagnosed with a neurological disease. Why is this? And how can we remove this stigma attached to mental illness? At the height of my disease, nothing distinguished me from a person with schizoaffective disorder or schizophrenia-the only difference came later: when I was cured. I don’t know how we change the systematic treatment of mental illness in this country, but clearly it needs to be rethought.

For more information about Brain on Fire, please click here.