The Constant DSM-5 Missed Deadlines And Their Consequences: the Future is Closing In

Aside from its reckless proposals for dangerous new diagnoses, the most characteristic thing about DSM-5 has been its remarkably poor planning and its consistently missed deadlines. 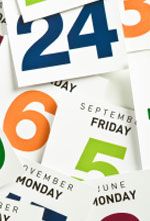 Aside from its reckless proposals for dangerous new diagnoses, the most characteristic thing about DSM-5 has been its remarkably poor planning and its consistently missed deadlines. By ambitiously over-promising and then inefficiently under-delivering, DSM-5 finds itself forever falling far behind its own scheduling targets, which then must constantly be pushed further and further into the future. But the future is now closing in on DSM-5. Its propensity for procrastination has already compromised the diagnostic coding system and suggests that the DSM-5 endgame will not be pretty.

Let's track the past first. When work on DSM-5 started in 2007, its date of publication was planned to be May 2011. That's right folks- DSM-5 was originally meant to be on the bookshelves by next month. Soon it became clear that this original publication date was too optimistic and would have to be postponed until May 2012. Why the delay? The DSM-5 leadership had greatly underestimated the time it would take to vet workgroup members for financial conflicts of interest. This turned out to be just the first in a series of repeated planning and execution snafus-all resulting in constantly missed deadlines.

Once it finally did get underway, the work on DSM-5 quickly elicited widespread concerns about its closed and ineffective process. Early dire predictions about the weaknesses of DSM-5 planning and methods turned out to be accurate. There were multiple and unaccountable delays in the public posting of the proposed DSM-5 drafts and these turned out to be poorly thought out and of surprisingly poor overall quality. In August 2009, the APA responded to outside pressure by appointing a DSM-5 oversight committee. Apparently this group was able quickly to recognize the poor state and weak methods of the revision, and in November 2009, the publication of DSM-5 had to be pushed back for yet another year-now to May 2013.

But all this extra time has been largely wasted. DSM-5 keeps managing to find ways of falling further behind its frequently postponed new target dates. It now seems doubtful that APA will meet its latest May 2013 deadline with anything approaching a quality product. DSM-5 will most likely either be late once again or it will be very sloppy-or perhaps both.

Extra time gained through extensions has been wasted in different ways. First, there is absolutely no excuse for not having the first drafts written on time and to a high level of quality. Instead the DSM-5 drafts were always submitted late and are still written so clumsily that (unless they are subjected to thorough and expert editing) they will cause great confusion to clinical and research practice.

The next fiasco was the impossibly complicated and poorly designed field trial which was introduced so late in the day that it could never receive a sorely needed externally review. The outcome is in an incredibly expensive and time-consuming project that completely misses the point and is a total waste of time, effort, and money. It should have been patently obvious (but wasn't to the DSM-5 leadership) that the field trials could never possibly be completed in the few months that were allotted to them. To make matters much worse, the typical DSM-5 administrative inefficiency resulted in an at least an 8-month delay trailing its revised start date-which had already been postponed for almost a year from June 2009 to May 2010. Things have gotten so far behind and there is so much work left to do with so little coherence in how the work is being done that to have anything approaching a reasonable DSM-5 will probably require another delay pushing back the May 2013 publication date. The only alternative will be the acceptance of an incredibly disorganized DSM-5.

And it gets even worse. An article by the DSM-5 leadership in Psychiatric Research Reports (PRR)  reveals between its lines that there has already been another serious casualty caused by all these unnecessary delays. It seems likely that the work on DSM-5 will have little impact on the official ICD-10-CM diagnostic coding system soon to be required for use by all clinicians. Diagnostic coding may seem an arcane and technical subject-and, in fact, in some ways, it is.

But in its own quiet way, coding is also crucially important. All medical and psychiatric encounters require a diagnosis and also a diagnostic code that is used for record keeping, compiling statistics, and determining reimbursement. The more precise the diagnostic code, the more information about the patient is communicated to the system, allowing for more sensitive research, administrative, and reimbursement decisions. For example, the ability to indicate the severity of a mood episode (included in the current coding system, ICD-9-CM) allows for the allocation of additional resources for more severe cases of depression.

It is important to understand that there is no such thing as a “DSM code.” By international treaty, all health coding used for reporting all diseases and disorders in the United States is based on the International Classification of Disease (ICD) coding system developed by the World Health Organization in Geneva. The US adaptation of the ICD is known as ICD-CM (International Classification of Diseases-Clinical Modification) and is developed under the authority of the National Center of Health Care Statistics (NCHS), an agency of the US government.

The coding system currently in use in the US is ICD-9-CM, first made official in 1977. All of the DSM-IV codes you have used all these years are really ICD-9-CM codes. We worked with the NCHS to adjust the ICD-9-CM system so that as many DSM-IV disorders and subtypes as possible would have unique ICD-9-CM codes. When we were preparing DSM-IV 20 years ago, we also did our best to increase compatibility with the WHO’s new ICD-10 system which was being developed at the same time. We expected that, within a few years, the US version of ICD-10-CM would be implemented. Working closely with NCHS, the mental disorders section of ICD-10-CM was tailored to be virtually identical to DSM-IV so that every DSM-IV disorder and many of its most important specifiers would have its unique ICD-10-CM code.

To everyone's surprise, the ICD-10-CM wound up sitting on the shelf for the next 15 years-because of a combination of bureaucratic foot-dragging and concern about the high cost of switching systems. Several years ago the US Government finally announced that ICD-10-CM would become the official coding system in the US beginning October 2013. The problem, of course, is that ICD-10-CM is geared for DSM-IV, not for DSM-5. By good fortune, however, the time line for ICD-10-CM coincided precisely with the original time lines for DSM-5 so that there would be ample opportunity for the ICD-10-CM system to be customized for DSM-5, as it had been for DSM-IV. If DSM-5 had been prepared on time, the ICD-10-CM coding system would have been able to incorporate the new disorders, subtypes, and specifiers being planned for it.

But the DSM-5 delays have likely greatly reduced or completely foreclosed this opportunity. In order to provide the coding community and insurers with a stable draft of the ICD-10-CM to allow programming of computer systems, the NCHS has imposed a 2-year freeze on ICD-10-CM changes starting October 2011. The only exceptions are for new diseases arising within the 2 year period (eg, the next new viral illness). The window of opportunity for making changes to ICD-10-CM has largely been closed and DSM-5, being so late to the gate, is pretty much left out in the cold. Its only remaining hope is that it will be able to convince NCHS that some of its proposed conditions are so compellingly new that they should fall under the exception to the freeze.

How did we get into this fix? Simple. Because DSM-5 is at least 2 years behind its original deadlines and was forever falling behind its own schedules, it has not been able to make final decisions that should certainly have been accomplished by now. As a result, the DSM-5 leadership will at best convince NHCS to get last minute unique ICD-10-CM codes for only a fraction of the DSM-5 proposals. The 2-year delay in DSM-5 has closed a window that would have been open if things were done properly and on time. Had either the original May 2011 schedule (or even the 1-year-late May 2012 deadline) been kept, APA’s approval process would have coincided with the ICD-10-CM development process, resulting in a coding system that would have reflected the new changes. Instead, DSM-5 will be hobbled, having to contort its coding assignments to fit into an ICD-10-CM that was geared instead toward DSM-IV.

Will clinicians still be able to use DSM-5? They will manage. DSM-III, which contained ICD-9-CM codes, was usable despite the fact that the ICD-9-CM deviated from it markedly on a number of important concepts. But given the importance of coding for communication, reimbursement, and storing diagnostic information, it is unfortunate that there will be such imprecision and lack of specificity in the ways the ICD-10-CM codes will describe the DSM-5 system. The delays have also created a completely avoidable incompatibility between DSM-5 and the official ICD-10-CM coding system.

This is the first concrete cost of the poor DSM-5 organization, its constant procrastination, and its indifference to deadlines and to quality assurance. It is getting very late in the DSM-5 day. Hopes for an on time and usable DSM-5 dim as the little remaining time continues to be frittered away with unnecessary delays. The only possible rescue would come from a radical course correction to redirect a floundering process by trimming its goals and radically improving its methods. Based on track record, I wouldn't bet on this long shot.