Culture as a Factor in Adherence: Learning From Latino Experiences

Successful culturally adapted interventions to improve adherence among Latino patients with depression and schizophrenia confirm how important it is to understand a patient’s entire sociocultural environment. 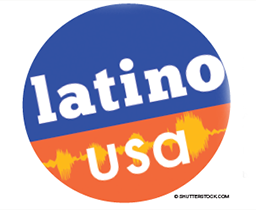 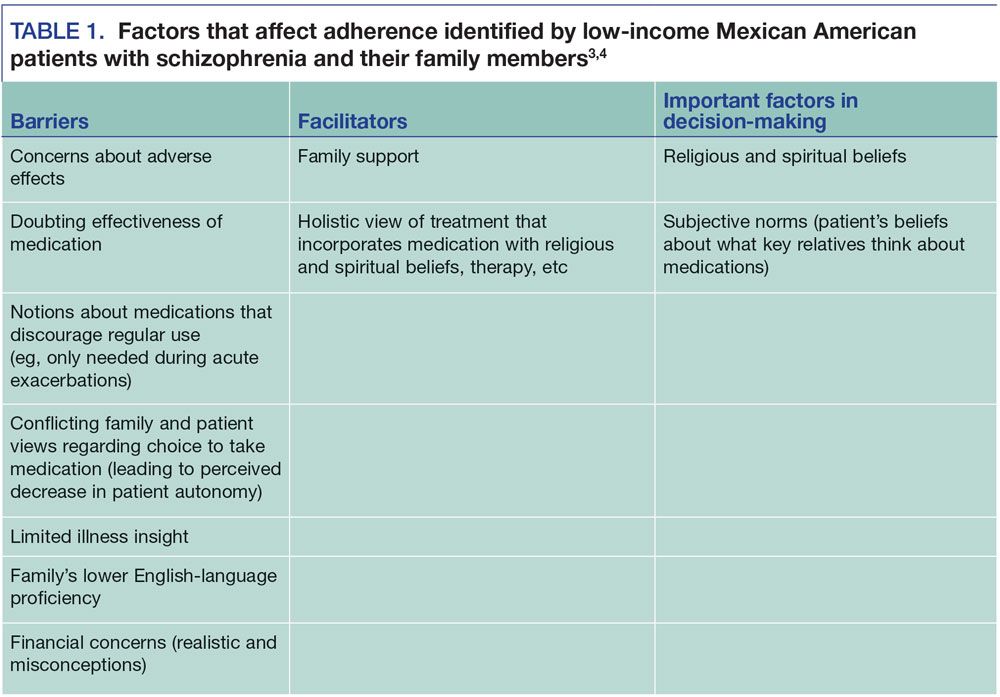 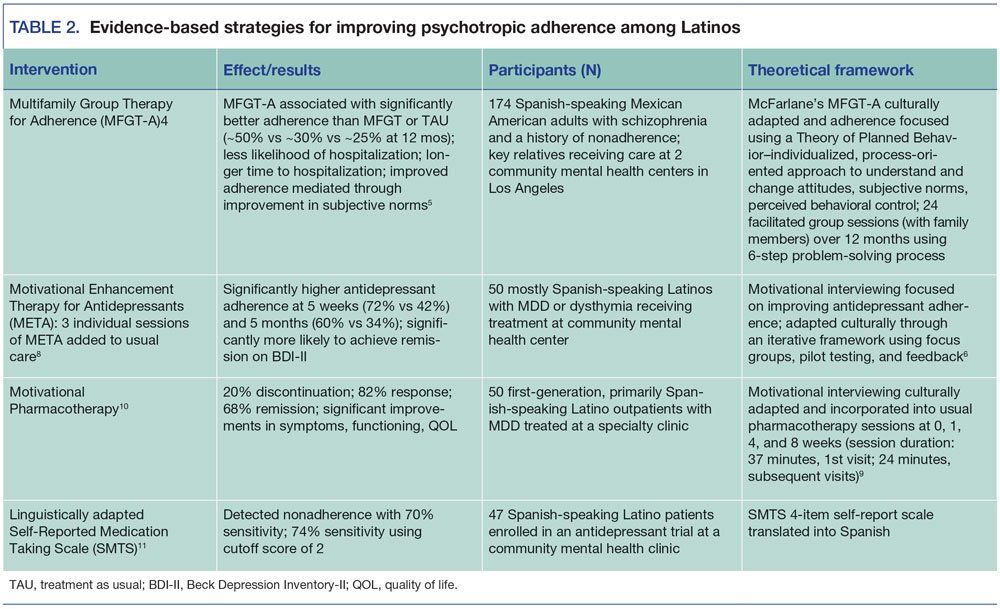 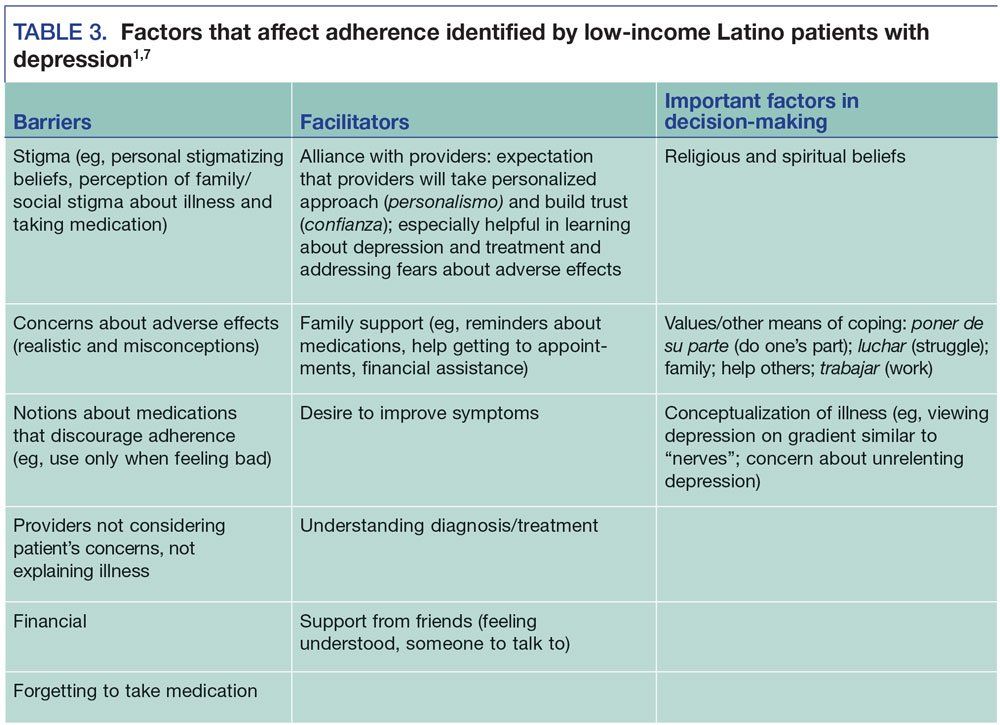 Potential contributors to nonadherence include lower socioeconomic status, lack of health insurance, barriers to quality care, and monolingual Spanish speaking (though with mixed results for antipsychotics). On the other hand, family support and psychotherapy can promote adherence.

US Latinos generally share Spanish-speaking ancestry or have emigrated from Latin America, but they are highly heterogeneous with widely varying backgrounds, acculturation, and socioeconomic circumstances. To better understand the many ways culture influences adherence, qualitative interviews and focus groups are particularly well-suited to elicit patients’ many nuanced experiences.

Maria is a 23-year-old unemployed, uninsured, bilingual Mexican American who is a devout Catholic. She lives with her parents, grandmother, and 2 younger siblings. Maria valued her friends and family but recently had been isolating herself, appeared progressively more unkempt, and mumbled to herself when alone. Her family, unaware of mental illness, became worried that she was possessed and prayed for the devil to leave her body. Her friend, Esperanza, became concerned after Maria told her she had been communicating with the devil.

Esperanza convinced Maria to see a psychiatrist, who diagnosed schizophrenia. After informing Maria about the diagnosis and reviewing medication options, including potential adverse effects, the psychiatrist prescribed an antipsychotic and scheduled a follow-up visit. Maria never returned.

Contrary to the psychiatrist’s explanation, Maria felt that she had wronged people and, in return, the devil gained control of her, which reinforced her grandmother’s trusted opinion. Maria had no hope that medication could get rid of the voices she heard and assumed she would not be able to afford the antipsychotic. Her mother was more open to medication but shared Maria’s concerns about adverse effects, particularly sedation, weight gain, and organ damage. Speaking only Spanish, Maria’s mother called the clinic to help Maria better understand the adverse effects, but she was unable to understand the monolingual English-speaking psychiatrist.

In addition to common factors that affect adherence, Maria’s case demonstrates how the complex interplay of elements in an individual’s sociocultural context influences choices to take and adhere to antipsychotic medication.

Table 1 highlights the most salient factors influencing adherence identified by low-income Mexican American adults with schizophrenia and their families living in Los Angeles (N = 14 patients and 20 key family members) and in a randomized, controlled trial of a highly effective multifamily group therapy for adherence (MFGT-A) designed specifically for Spanish-speaking Mexican Americans with schizophrenia who had been nonadherent to medication (N = 174).3-5

In patients from many cultural backgrounds, concern about adverse effects and decreased illness insight are common barriers to adherence. Another barrier is the belief that medication will not work or should be used only during periods of symptom exacerbation. This belief is often based in culturally informed illness concepts, such as religious or folk explanations. Religious and spiritual beliefs are strong influences, sometimes discouraging adherence, as in Maria’s case, but notably also facilitating it. For example, during MFGT-A, patients and families come to see antipsychotics as the means by which God has helped or as part of a holistic approach to recovery using medications, religion, therapy, and other wellness-promoting activities.

Maria’s case demonstrates that even for a patient who is proficient in English, family members may not be, thus potentially excluding a valuable asset in promoting adherence and facilitating treatment alliance. Families exert a strong, generally positive influence; for example, they can help patients explain adverse effects or worsening symptoms to providers. The significantly improved adherence associated with MFGT-A is mediated by improvements in subjective norms (patients’ beliefs about significant others’ attitudes toward medication), but not patients’ attitudes toward medications or their perceived behavioral control. Such factors reinforce the need for family involvement in treatment planning.

As summarized in Table 2, MFGT-A is highly effective. It employs a process-oriented approach that uses an individualized systematic assessment to identify the most significant cultural influences for each patient/family, which allows them to address identified problems. While most psychiatrists will not have access to this intervention, providers can learn from its emphasis on an individualized approach to assessing cultural influences on illness conception and medication.

Ricardo is 37 years old, recently unemployed, and married with 3 children. He is originally from the Dominican Republic, speaks primarily Spanish, and has diabetes. He went to an outpatient psychiatrist after his wife and primary care physician had forced him because of his low mood and energy, poor sleep, and worsened blood glucose levels.

Ricardo had previously worked as a grocery store stocker but injured his back at work. He did not inform his boss of the injury, and he ultimately missed several days of work because of the pain. Ricardo was fired soon after. Around the same time, he learned his mother had died. He was unable to find another job. He was devastated. To support their family, his wife started working. Ricardo felt worthless and guilty; he assumed he was failing his family.

He avoided his friends, lost enjoyment in life, became fatigued, and had insomnia. He denied thoughts of suicide, saying he would never consider it, but reluctantly admitted thinking his family would be better off without him. He attributed his symptoms to his ongoing back pain and diabetes. He tried an herbal tea to no avail. This scared him; he feared that he had a chronic, severe, perhaps incurable depression or even that he was “crazy.”

Ricardo was even more hesitant about antidepressants after hearing friends talk about another friend who took an antidepressant as being “lazy and just needing to put forth more effort.” After a long discussion with his psychiatrist about depression, he was prescribed an antidepressant. He took it for 2 weeks but with no effect, which led him to worry that he was truly “crazy.” Fearing that increasing the dosage would cause “addiction” and would mean he was not doing his part to recover, he stopped taking the medication.

The psychiatrist’s role in addressing barriers to treatment adherence

To better understand the cultural influences on medication adherence for at-risk patients, Interian and colleagues6 and Vargas and colleagues7 conducted qualitative focus groups and interviews with lower-income Latinos (N = 30 for each study). Their goal was to develop culturally adapted motivational interviewing interventions to improve adherence. Most of the participants were middle-aged, lower-income, primarily Spanish-speaking women from the Dominican Republic or Puerto Rico. The inclusion of mostly women in these studies may be because of higher rates of depression among women, but possibly also because of cultural barriers for Latino men to seek care. Findings from the studies (Table 3) indicate that barriers to adherence include:

• Stigmatizing beliefs (both personal and among friends and family) about depression and antidepressant treatment (eg, feeling depressed is a sign of laziness or weakness, taking an antidepressant is a sign you are loco [crazy])

Participants commonly conceptualized depression as having “classes” of different severity, similar to “nervios” (nerves), a Latino concept of distress. Many expected a personalized approach (personalismo) and to learn which “class” of depression had been diagnosed. Participants also commonly believed that antidepressants were reserved only for severe depression in chronic, incurable cases. While religion often influenced adherence, the researchers noted that some patients were comfortable with biological models, which emphasizes the importance of learning from patients what influences are most important.

Table 2 summarizes 2 culturally adapted motivational interviewing interventions that incorporate key cultural values expressed in the qualitative studies. These values were, at times, obstacles but were reframed to promote adherence. For example, many patients expressed the importance of poner de su parte (putting forth effort/doing one’s part) or luchar (struggle), sometimes feeling they should avoid medications and just put more effort into overcoming depression. However, participants also viewed taking medications as a way to poner de su parte in depression recovery. Interian and colleagues8 found that incorporating this reframing in Motivational Enhancement Therapy for Antidepressants highly effective.

BalÃ¡n and colleagues9 and Lewis-FernÃ¡ndez and colleagues10 developed Motivational Pharmacotherapy, which incorporates culturally adapted motivational interviewing into medication visits. Their findings indicate that only 20% of the patients discontinued treatment and the duration of visits was compatible with common clinical time constraints: 36.7 minutes for visit 1 and 24.3 minutes for subsequent visits. The full manual is available at: http://www.nyspi.org/culturalcompetence/what/reports.html. The final strategy in Table 2 is the translated Self-Reported Medication Taking Scale, a tool for quickly and more accurately assessing adherence.11

We encourage psychiatrists to assess the important role that culture plays for any patient when they prescribe a psychiatric medication. Successful culturally adapted interventions to improve adherence among Latino patients with depression and schizophrenia confirm how important it is to understand a patient’s entire sociocultural environment, by gauging the most influential elements and incorporating patients’ perceptions of illness and treatment.

While factors such as cultural values affect adherence, it is important not to overgeneralize given the broad diversity of backgrounds and socioeconomic environments of US Latinos and the varying degrees individuals identify with their surrounding culture. As outlined in the Cultural Formulation Interview in DSM-5, a non-judgmental, patient-centered approach is recommended when exploring factors such as religion, illness insight, feared adverse effects, and personal and familial values as potential barriers to and facilitators for adherence. These approaches hold valuable lessons for treating all patients.

Dr. Martinez is a Resident Physician, and Dr. Lanouette is Associate Clinical Professor, Department of Psychiatry, University of California, San Diego.The authors report no conflicts of interest concerning the subject matter of this article.