The Dope on Medical Cannabis: Results of a Survey of Psychiatrists

If our survey on medical cannabis is any indication, psychiatrists are widely-and deeply-divided on whether and how marijuana should be used in clinical practice. You can read the results here.

If our survey on medical cannabis is any indication, psychiatrists are widely-and deeply-divided on whether and how marijuana should be used in clinical practice. Feelings are running, well . . . high, about whether, when, or in what circumstances this drug might be prescribed for patients with psychiatric disorders.

The graphs you see on the following pages summarize survey results. 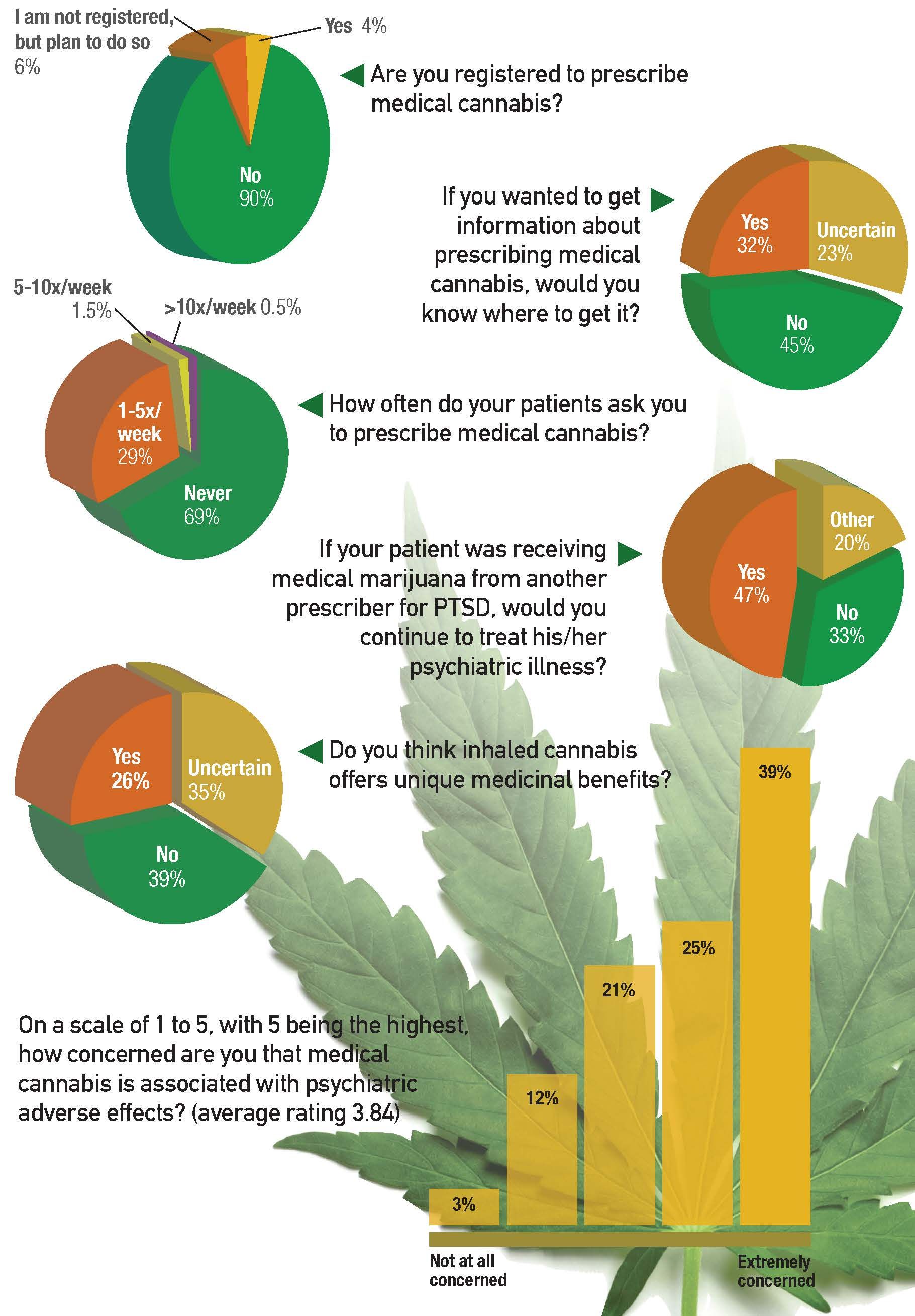 What is your opinion of medical marijuana?

We got 922 answers and 112 comments: 37% would never prescribe; 40% would consider prescribing in some circumstances; and 11% would consider, but only in pill form. Here’s a sampling of the widely divergent opinions.

“Marijuana should be legal for all and should not require a prescription."

“There is no medical necessity to legalize or prescribe something as addictive or toxic as smoked marijuana.”

“I am offended at the use of the term 'medical.' I am a physician and it is up to physicians to decide what is medical, not politicians. It is recreational or political, not medical until we as a profession say otherwise."

“Marijuana is NOT medicine. It happens to be effective for chemotherapy-related side effects, but not all the time, and not for everyone. Let’s get real. People want ‘medical marijuana’ because they feel less discomfort WHEN THEY ARE HIGH. When people are facing terminal illness, I give them whatever they want. Welldocumented, intractable pain-almost anything they want, with careful monitoring. Short of this, they want the buzz. There is nothing inherently wrong with wanting this. I, however, do not need to support it in my practice.”

“I would not prescribe marijuana because it has no psychiatric indication.”

“I work in a state facility where it is not an option to prescribe marijuana. However, some of my elder patients may benefit from prescribed pills of its synthetic derivatives like Marinol.”

“I have a 49 year old patient with rapid deterioration of multiple sclerosis. Marijuana helps her with mood swings and discomfort. If legal, I would prescribe it without hesitation . . . ”

“I would prescribe for terminally ill cancer patients. I consider it to be a toxic, dangerous drug under most circumstances.”

“I would legalize all drugs of abuse as the war on drugs is a failure, wastes money, is a threat to civil liberties, and funds narco-terrorism.”

“Because I am an addiction psychiatrist, I do not prescribe medical marijuana. Like all drugs, it has its place in the medical armamentarium, and I approve of its medical use when appropriate. There should be more funded research and less ‘religious opinion’ so we can know what the proper use of marijuana is. Currently it has become a political football and the medical- correctional industry has a financial stake in not acknowledging the abject failure of the War on Drugs.”

For what psychiatric conditions would you prescribe medical cannabis?

531 respondents left comments. Aside from “none,” these were among the responses:

“Pain management, glaucoma, migraine, cancer, AIDS, and a number of other conditions”

“Bipolar I & PTSD & disability level inability to have social encounters or even to venture out when a neighbor can view them. If it significantly eases paranoid delusional obsessions. Those I feel comfortable in trying out.”

“Terminal patients who qualify for Hospice”

If your patient was receiving medical marijuana from another prescriber for PTSD, would you continue to treat his/ her psychiatric illness?

What hasn’t been addressed is the liability of mixing psych meds with cannabis when there is no way to determine the cannabis dose. If we Rx cannabis and the patient has a MVA are we liable?”

“My patients have a ‘one prescriber’ contract with me.”

“Would attempt to replace the MJ ultimately via the treatment; would not accede to patient continuing to take as part of a lifeplan.”

“Most likely, but only if I felt it was being used appropriately and not hindering treatment progress or adherence to evidence-based treatments.”

We would like to extend a special thank-you to our Editorial Board Member, Dr Helen Lavretsky, who wrote our cover story about medical cannabis and who helped us develop this survey. And thank you to all who took the time to complete this survey. We would also call your attention to a survey recently conducted by The New England Journal of Medicine in which physicians across various specialties were asked their views about medicinal use of marijuana.1References:

Articles in this issue
First INIMH-Sponsored International Exchange on Integrative Mental Health Care
Discontinuing Medications: When, Why, and How-to
Characteristics of Sleep Disorders in Women
Requiem for DSM
Olanzapine/Fluoxetine Combination Affirmed for Bipolar Depression
Crime and Therapy: Good News About Pharmacotherapy for ADHD
Late Last Night
The Dope on Medical Cannabis: Results of a Survey of Psychiatrists
Obesity in Patients With Psychiatric Conditions
Hypothyroidism: An Important Diagnostic Consideration for the Psychiatrist
Treatment of Nutritional and Metabolic Disorders in Psychiatry: Integrative or Integrated?
Why Psychiatrists Are Physicians First
The Haze Surrounding Medical Cannabis-Take the Survey
A Eulogy for Psychiatry's Abraham: A Model of Ethics, Forensics, Advocacy, and Humanitarianism
Related Videos
Related Content